The Path to the Sky

By Bennett Barthelemy and Rita Maes 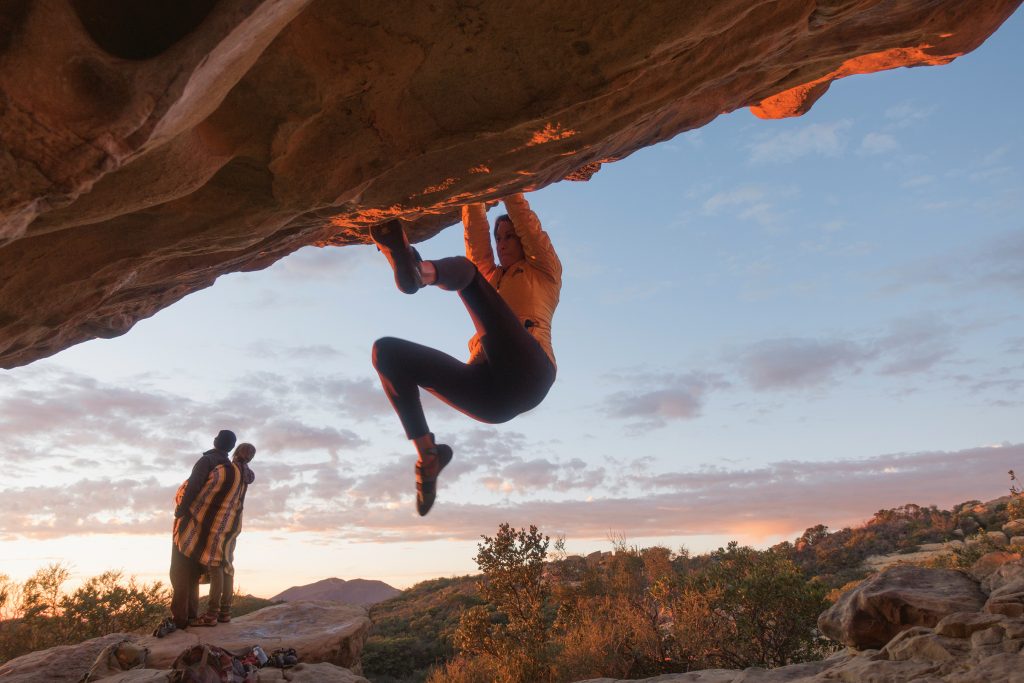 At the back of the overhanging cave of Lizard’s Mouth, Rita reached for the pocketed sandstone with both arms stretched out above her head. Her feet left the ground and found purchase higher up on the ancient folds of solidified sand as her left arm shot upward for the next deep pocket. A leg then dropped, swinging freely behind her for balance, as an arm would cross to a further, higher handhold. In my spotting stance, I held my arms skyward so I could gently guide her fall to the foam pad we brought if she were to let go unexpectedly. The setting sun flared out around the edge of her silhouetted body, and far below the cave, I could see the Channel Islands and the Pacific Ocean shimmering an azure blue. 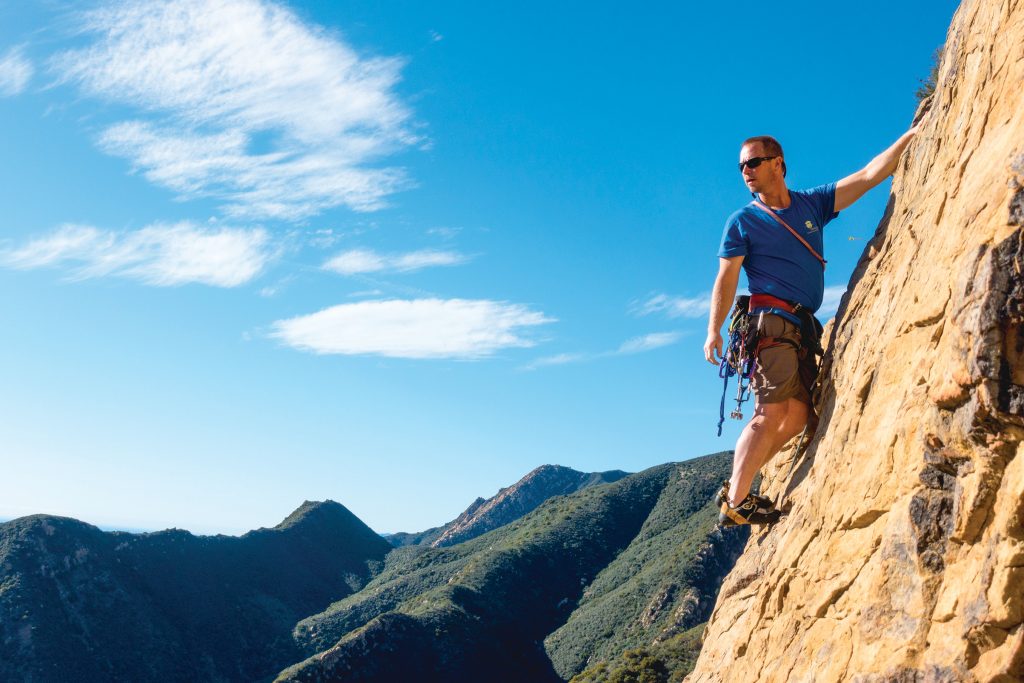 There are few areas in California that can match the truly sublime sunsets and views that Camino Cielo offers, especially if you have only half a day for a quick adventure. Once you have left Highway 101 and then Hwy. 154, this vertiginous serpentine road runs a marathon (25 miles) across the ridges of the Santa Ynez Mountains that rise some 4,000 feet above the glistening Pacific Ocean and hem in the Mediterranean-esque Santa Barbara and Goleta. The drive itself is well worth the time investment. Winding along the eastern side of the Camino, you will often see paragliders and hang gliders launching, as the currents here are some of the most favorable anywhere. If you are a climber – and yearn for textured, well-featured stone with epic positioning – then you won’t want to miss Lizard’s Mouth (for bouldering) or Gibraltar (for roped climbing) that essentially lie at opposite ends of the Camino Cielo.

3,000 feet above the Central Coast region of Santa Barbara County is home to the chaparral plant community. Chaparral comprises just five percent of the total land in California. It is very drought tolerant, dry and very fire prone, and may burn a couple of times a decade when the natural burn cycle isn’t interrupted. Scrub oaks, manzanita, sages, and yuccas are common. If you wander too far off the stone slabs or a defined trail, the chaparral can feel all but impenetrable at times. Some believe that the leather chaps cowboys like to wear to protect their legs originated in the Southwestern U.S., where they were often riding through sagebrush and chaparral (hence the name ‘chaps’). If you remember nothing else from this rambling essay, this last tidbit will likely come to mind if you choose to wear shorts for your off-trail explorations up here.

Raucous stellar jays and soaring turkey vultures keep company with western fence and alligator lizards. If you are paying close attention, it isn’t uncommon to find prints from more elusive denizens like raccoons and bobcats in the sandy washes. As you hike toward Lizard’s Mouth, or along the base of Gibraltar Rock, allow yourself your own flights of fancy imagining what strange beasts have been frozen in time. My partner, Rita, is convinced that the bouldering cave resembles a wide-mouthed toad rather than a lizard.

At the eastern edge is the iconic Gibraltar Rock. A cliff over 100 feet high immediately off the steep road, it’s a popular place for the general public to scramble a rough trail to its summit for the amazing views. Below the summit surrounding all three sides of Gibraltar, are more than a dozen roped climbs varying in difficulty from close-to-beginner level to seasoned expert. One nice thing about this cliff is that the easy access to the top means a rope can easily be hung from above — instead of having to lead climb the routes that require more gear and skills.

I stood back a few paces on the cave floor as Rita stretched skyward up the steep edge of Lizard’s Mouth. I took close mental notes of her flowing movements, hoping I would unlock a similar gymnastic sequence after her ascent. The rock picked up the rose hue of the setting sun. Rita was connecting the dots on her own path to the sky…

Gibraltar Rock: If you exit Hwy. 154 and head to the right when cresting the summit, you will find East Camino Cielo. Where this road ends (some 18 miles in), it begins to drop toward Santa Barbara. This is Gibraltar Road. About 1.8 miles down this road, you will find the namesake crag rising on the right side of the road. The labyrinthine streets in the Santa Barbara hills make access heading up Gibraltar Road a fairly intense navigational challenge, so I prefer this route up Hwy. 154 and enjoy the ridge drive.

Lizard’s Mouth: After exiting Hwy. 154 onto West Camino Cielo, on the left side of the road at about 3.5 miles, slabs of flowing stone and random mystically shaped boulders appear heading off and down toward Goleta. There is not a defined specific trail as such, but at about one-quarter mile beyond the Los Padres Forest Service sign at the road’s edge, and with a bit of exploring, you can find the cliff face by heading west and then north. You will arrive on top of the head of the Lizard and then need to access it from the right side and head down.

Due to the elevation and the fact that winds can whip across the ridge, especially when the Sundowners blow just after sunset (the Sundowners are specific to the Santa Ynez Mountain Range’s extreme windstorms that can, and often do, spell disaster if there is a high fire danger), it is a good idea to bring a warm layer — even in summer. Not to be missed is the offshoot from East Camino Cielo, Painted Cave Road, which is home to some amazing Chumash rock art. The Chumash are the local indigenous Native American tribe and keen astronomers. Their ancient artwork inside the cave reflects this cosmology.

For more information on Lizards Mouth, Gibraltar Rock, and several other climbing areas along Camino Cielo, visit mountainproject.com and summitpost.com.

Local Wisdom: Camino Cielo, from Lizard’s Mouth across to where it cuts down to Gibraltar Rock, is all paved. It will require a bit of defensive driving as there may be potholes, wild motorcyclists and cyclists, and no center line. Other considerations: the Central Coast of Santa Barbara County is blessed by a relatively mild Mediterranean climate. However, Camino Cielo is the only spot in the Santa Barbara area where you might find snow in the colder months.