A Sweet Taste of Ojai

These days, we’re all about our tastings — wine, beer,bourbon, tequila, cheese, the list is always growing.Anytime you can combine food, drink, and friends with alittle learning is a guaranteed good time. 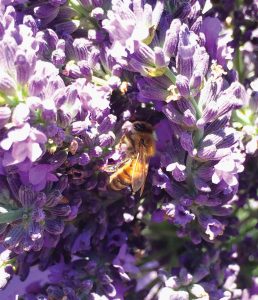 But honey tasting? That was a new one for me. I mean, honey is honey, right? Bees make it, we buy it in bear-shaped bottles, the end. Not if you visit Ojai’s Heavenly Honey Tasting Room. A honeycomb of questions quickly presents itself: Where is my honey sourced? How is it processed? Does it all taste the same? How do I know if I’m getting “the good stuff?” Fortunately for us, the Haskins family has all the answers.

Situated near the corner of Signal Street and Ojai Avenue, the Haskins Heavenly Honey Tasting Room is about as close to the center of Ojai as you can get. And so, too, is the Haskins’ philosophy: Doing things the right way is all-important, even if it takes more effort.

Step into the tasting room and one of the first things you’ll notice is a long counter lined with large honey jars. A closer look will reveal a curious surprise: they’re not all the same color. Far from it, in fact. On one end is what looks like butter. On the other end, something resembling molasses.

Is that all really honey? Yep, says Barbara Haskins. Do they all taste the same? Have a seat and try for yourself. Taste the pomegranate or blackberry honey, and you’ll get a hint of tartness. The orange blossom is a bit sweeter, and smells of oranges — but doesn’t taste like them. The darker buckwheat, avocado, and alfalfa honeys are thicker, and a little bolder. 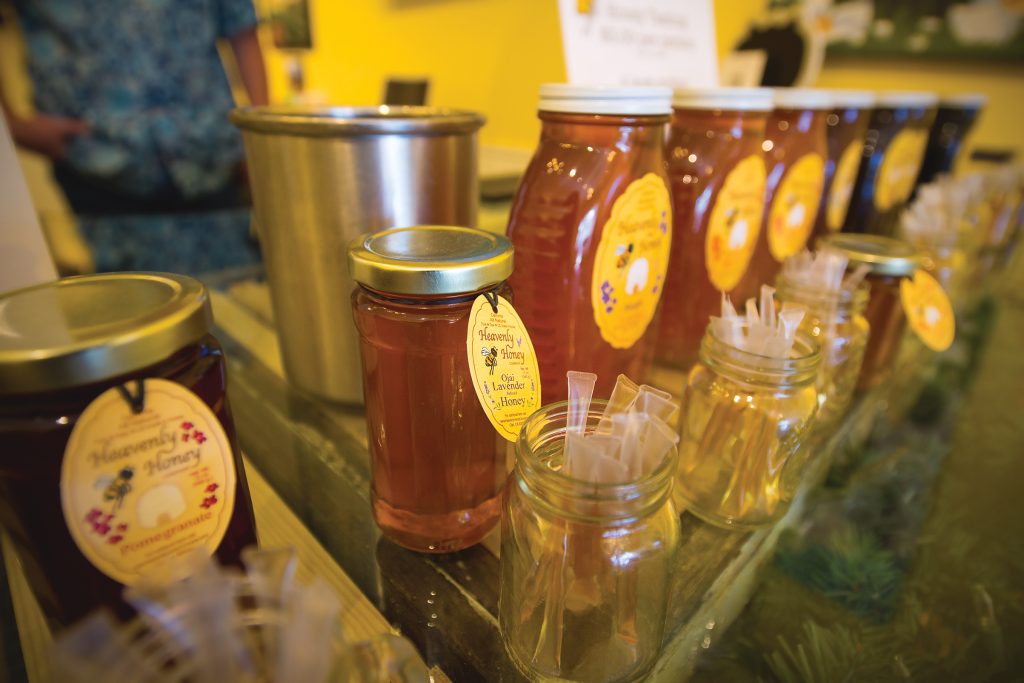 Heavenly Honey’s only infused honey, the Ojai Lavender, pays tribute to the valley with an Ojai sage honey base and lavender sourced from the Upper Ojai Valley.

The diversity of color, flavor, texture, and viscosity isn’t due to additives. This is pure, raw, unfiltered stuff, and all single-source — meaning each variety comes from one place. They don’t mix, blend, or add anything. The one exception is the Ojai lavender honey, which is Heavenly Honey infused with locally-grown lavender. “And I was really hesitant to infuse it!” Barbara says. “Why change something that already tastes so perfect?” But after numerous requests from customers, Heavenly Honey crafted it as a tribute to Ojai: using their sage honey as a base, they added a lavender infusion, grown organically by their pals at Ojai Lavender Farms. The result is sweeter, with subtle lavender smell and taste.  The Heavenly Honeys 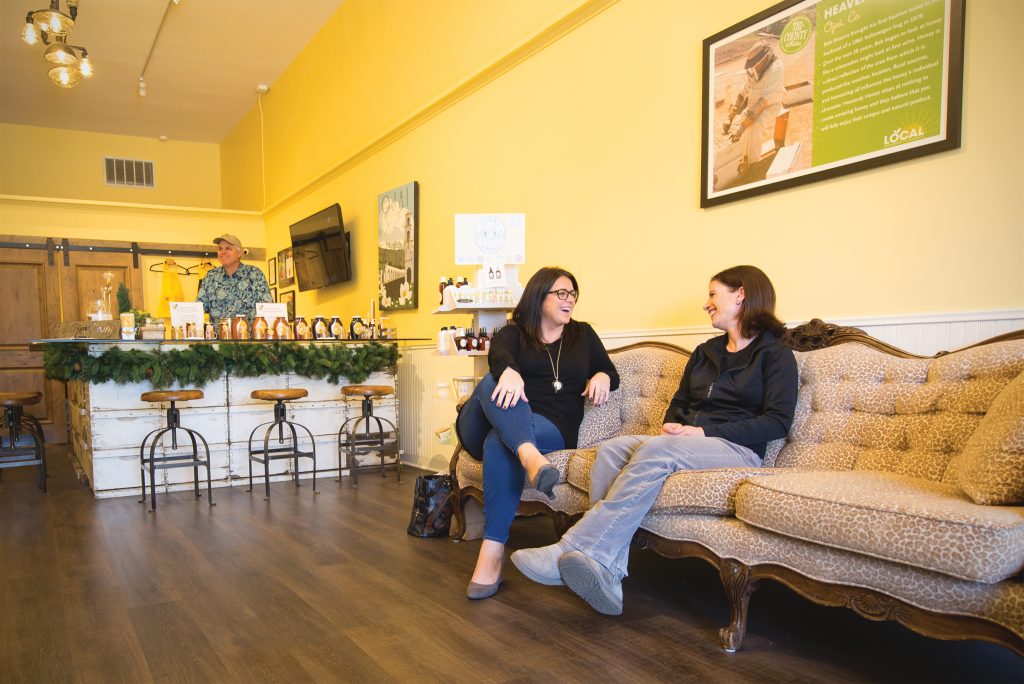 The bright and spacious tasting room.

As the saying goes, you are what you eat! Honeys taste different depending on where the beehives are placed.

The sage honey — produced here in the Ojai Valley — is a treat, one that requires specific weather conditions that don’t come around every year. Surprisingly, it doesn’t taste like sage. It is sweet and delicate, making it excellent in tea.

Also sourced locally, the wildflower honey is a bit different each year, because the hives are placed in different locations according to what’s blooming, and where. It’ll be interesting to see how the fire-follower wildflowers — so called because they only come around after an event like 2017’s Thomas Fire — affect the complexity of this year’s product. Some believe that a spoonful a day can help ease allergy symptoms. 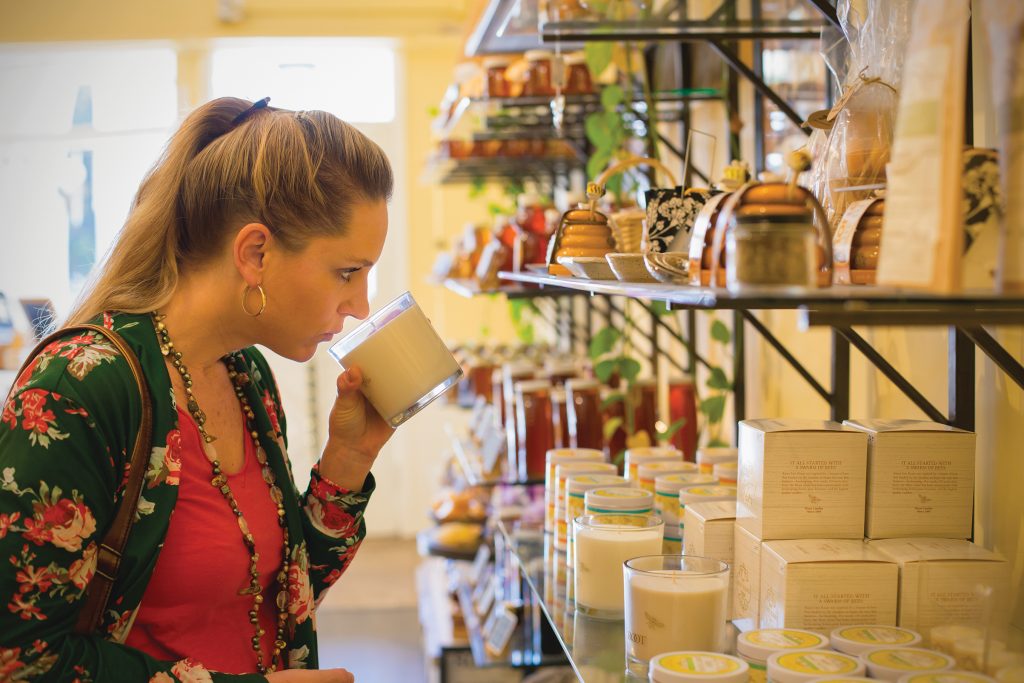 Plenty of non-edible goodies line the shelves.
Another Ojai Valley product, the avocado honey is one of Heavenly Honey’s heartier varieties. “It’s a unique honey that’s like molasses,” Barbara says. “Anywhere you’d use molasses, you can use this honey instead.” From ginger cookies to a salmon glaze or even on a cheese board, you’ll find lots of uses for this dark, bold varietal.

Orange blossom honey is a great all-around honey, excellent in cooking as well as in tea. Hives are placed in orchards  across Central and Southern California, creating one of Heavenly Honey’s most popular varieties. “It’s sweet enough that it can sweeten anywhere that sugar would, but obviously it’s healthier,” Barbara explains. “It doesn’t have a big flavor profile, meaning it won’t change the flavor  of the food other than to sweeten it.” Barbara uses it every Thanksgiving when making her cranberries. 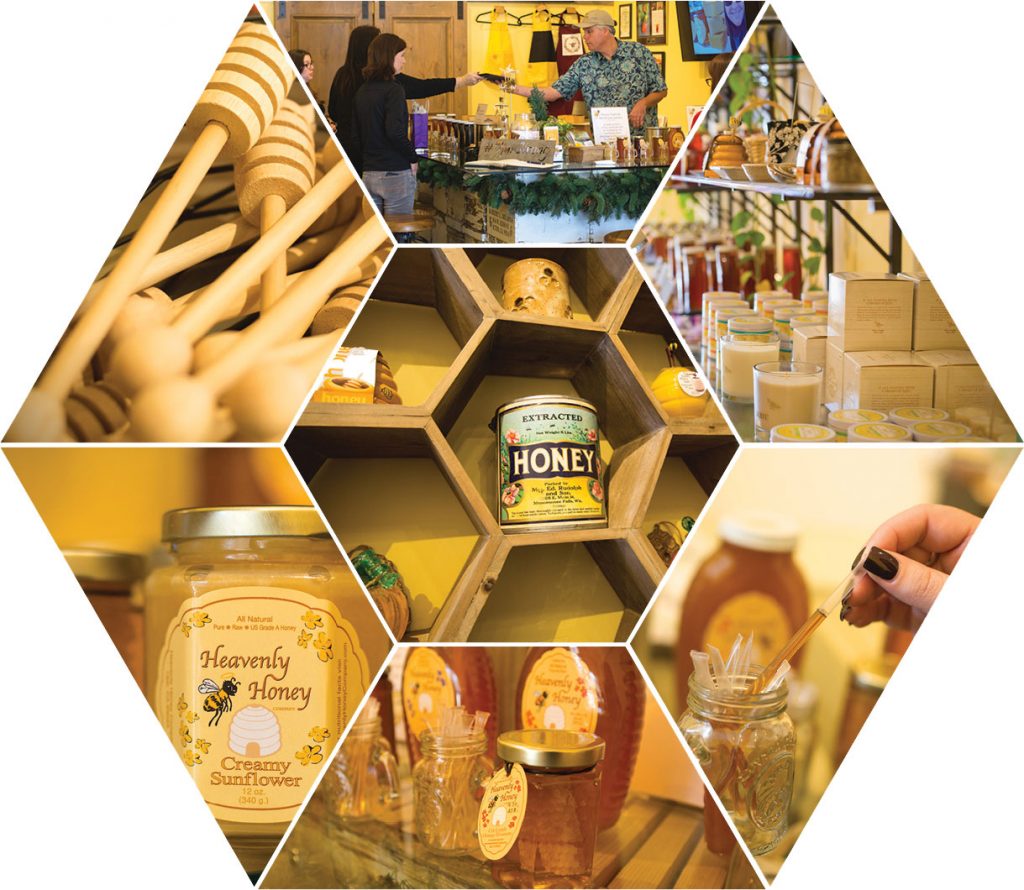 Coming from a little further afield, the alfalfa honey hails from the alfalfa farms of the high desert. But don’t be fooled by the name — it’s not grassy. “To me, it tastes like raw sugar with a caramel finish,” Barbara says. “I put that in my coffee. It’s also really good in black tea with cream.”

Both the alfalfa and buckwheat are good on oatmeal “and whole grain things,” Barbara says. The buckwheat honey comes from the Gorman, California, area and boasts a slightly stronger flavor, but not overwhelmingly so. Try it as a substitute for syrup the next time you make pancakes. And because it’s thicker, it can be great to help soothe a sore throat. That same quality also makes it good for a face mask. “Because it’s dryer, when you rub it around on your face, it pulls dead skin cells off, but not in an abrasive way. And it kills bacteria in the process, leaving you with a better complexion,” Barbara notes, adding that all pure honeys are antibacterial.

The wild blackberry honey takes us out of California and into Oregon, where blackberries grow in abundance. It’s sourced from a small beekeeper in Oregon, who only makes a few drums per year (most of which Heavenly Honey buys).

It really does taste like blackberries! I also loved the pomegranate honey for the same reason; there’s a distinct tartness to both which makes them perfect when spread on a fresh-baked biscuit or added to a fruity tea. 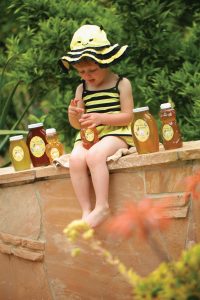 Photo by Jeanne Tanner PhotographyThe Haskins’ daughter, Olivia, was raised in the honey business just like her mom.

And then you have the clover and creamy sunflower honeys, which hail all the way from the Dakotas. The beekeepers bring their California bees halfway across the country to enjoy the huge clover patches and sunflower farms the region is known for. The nutmeg and cinnamon flavors exhibited in the clover honey are the product of the nectars, not additives. And although you often see grocery store honeys labeled as “clover honey,” they’re often blended and filtered, meaning you lose much of that distinctive taste (not to mention the nutrients).

The creamy sunflower, meanwhile, is a big favorite because of its spreadability. It looks like butter in the jar, and spreads like it, but it sure doesn’t taste like it. To achieve the consistency, it is creamed, which makes small crystals that eventually give it that special texture. I recently tried the sunflower honey on a waffle — a truly sublime (possibly life-changing) experience. Barbara suggests spreading it on a green apple. It’s also fantastic on toast, cheese, and fruit, or even as an extra pop of flavor for your peanut butter and jelly sandwich.

We can talk about these honeys all day, but the bottom line is, you’ve just got to try them for yourself. The Heavenly Honey tasting room is a perfect stopover while you’re in Ojai, which is less than 30 minutes from Ventura and Highway 101.

A honey flight is just $3 per person, and includes some sweet knowledge from Barbara and her husband, Jeff. Sidle up to the “bar” — which is made from Barbara’s dad’s old beekeeping equipment — surprise your taste buds, then pick your favorite varieties to bring home. There are tiny jars perfect for gifting, up to large tubs for the newly obsessed (guilty), and lots of bee-themed accessories and novelties.

You might walk into the tasting room a casual tourist, but you have a very good chance of walking out a honey snob. At least that’s how I felt, anyway. Now, along with my fancy beer, coffee, and olive oil, I have to have my fancy honey. (Which, by the way, isn’t really all that fancy; read on to see what I mean.)

Barbara loves having the tasting room to share all of this — and tons more — with her customers. “I really want to be able to educate the public. That’s very important to me, that people leave there a little smarter than when they walked in.” 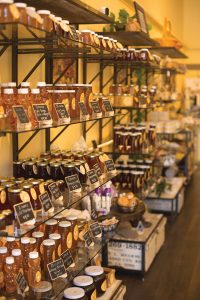 A tasting room might not have been in the original business plans, but Barbara thinks her dad would’ve whole-heartedly approved with how things turned out.

It was her father, Bob, who started Heavenly Honey four decades ago, when he brought home his first beehive in the back of his 1965 Volkswagen Bug. Barbara was just 6 years old at the time, and became her dad’s right-hand-man until she left for college.

Bob is no longer with us, but his daughter carries on the passion he started 40 years ago. Like her dad, Barbara is proud to do things the right way. Which, interestingly, is the hard way. Heavenly Honey is actually quite simple — it’s just unfiltered honey — but it takes a lot of work to keep it that way.

“It’s a totally inefficient way of doing things,” Barbara laughs. They start with bees and beekeepers from this area, folks they’ve worked with for years. “We call ourselves the honey mafia,” Barbara jokes. “Many of them have been friends of our family for decades.” They’ve chosen to work with specific beekeepers, she adds, “Because they have the same kinds of cultural standards as we do — the way the hives are treated, the way we handle the honey …no chemicals used, etc.”

Beekeepers take their bees to different locations, and then extract the honey into 55-gallon drums which are brought back to the Heavenly Honey processing facility. There, it is slowly, slowly prepared for market. Some  of the thicker honeys require warming to get them out of the 55-gallon drums.

“We have warming blankets specially designed to be used around 55-gallon drums,” Barbara explains. “It’s a really slow process, bringing it to temperature. It’s kind of like warming the drum in the sunlight as opposed to harsh electric heat … we warm it enough to pump it out of the drum into a stainless steel kettle, and we use gravity to pour it out into the jars, one at a time.” They’ll let them sit for a while, so there are no air bubbles in the jars. “It just looks nicer when we do that,” Barbara says. “Again, it’s totally inefficient, but it makes a  big difference.”

In the end, it all comes down to honoring the product, and all the energy that’s been put in — on all sides — to making it happen. “The beekeepers know how hard the bees had to work to make the honey. And everything’s 10 times harder right now” with the frequent drought conditions in recent years, Barbara says. “So the beekeepers are pleased we’re bottling the honey and bringing it to market in a way that represents how hard they work, too. It’s a credit to how hard everybody’s worked.”

Want to dive deeper into the honey-making process? Lucky for you, Heavenly Honey is adding a new venture this year: a beekeeping experience. The Pepper Tree Retreat, located in Ojai’s bucolic East End, will play host to a few hives in their herb garden. Heavenly Honey will bring folks out to the property and go through the hives, showing them what happens inside, depending on the time of year. “It’s an inside glance not everybody gets to see,” Barbara says.

So whether you’re ready to suit up for a sweet adventure or sit down for a quick taste of something sweet, Heavenly Honey has you covered.

For more on Ojai’s Heavenly Honey, check out their website at heavenlyhoneycompany.com, or visit the tasting room at 206 E. Ojai Ave, Ojai.