San Luis Obispo County has it all — from sunshine to surf, endless recreational opportunities, a world-class wine region, fabulous breweries, great shopping and dining, respected places of learning and, not surprisingly, a thriving local music scene. The county is bordered to the west by coastal ocean views and lined with the gentle rolling mountains heading east.

Located about halfway between Los Angeles and San Francisco along U.S. Highway 101, “SLO County” is home to a musical community that covers all genres and features a variety of fun venues. Here are some of the area’s most well-known and favorite spots:

SLO Brew has offered music lovers authentic and intimate performances from local bands to famous musicians since 1988. The likes of Neil Young, Snoop Dogg, and Sublime, among countless others have graced their stages. SLO Brew takes pride in hosting community-driven events, and they continue to step toward growing their venue. The space shares a home with the SLO Brew’s taproom, 30-barrel brewhouse, restaurant, and soon-to-be distillery. 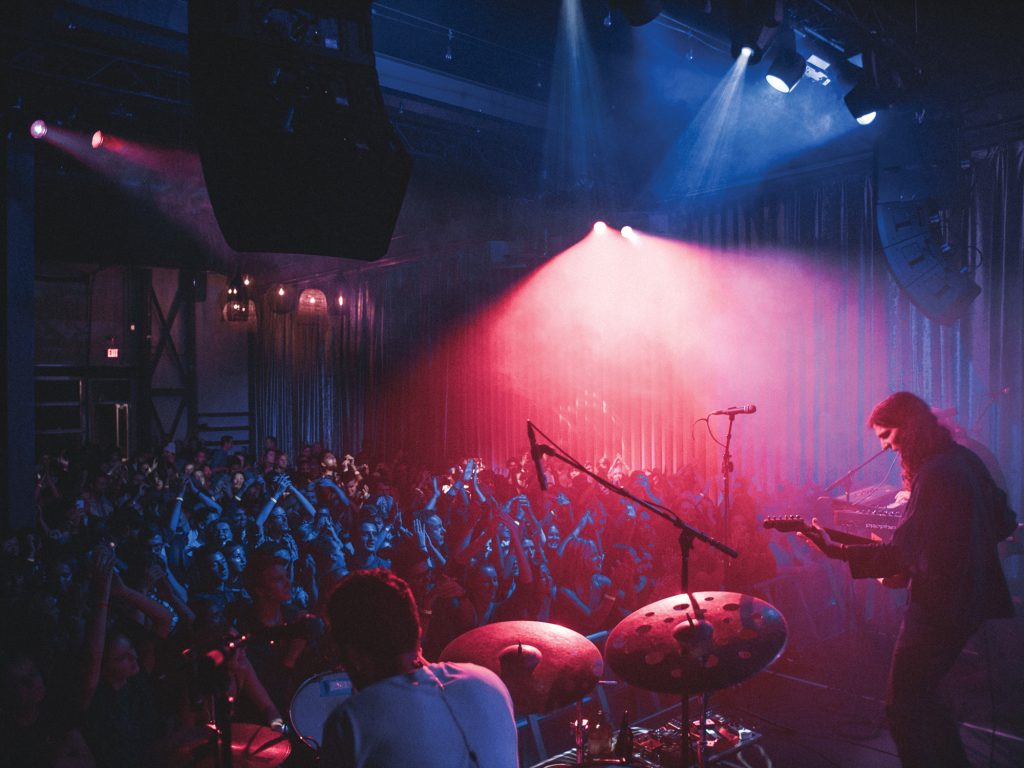 The new SLO Brew Rock Event Center opened its doors in September 2018 to locals and musicians alike. “We wanted to purposefully build a state-of-the-art, multipurpose music venue,” said SLO Brew co-founder Hamish Marshall. “The pub downtown (SLO Brew) was always intended to be a transitional space while we waited to get approval for the event center.”

SLO Brew Rock Event Center has the largest LED screen wall in the county, concert style lighting, and exceptional acoustics that separate the room from others in the county. They hold more than ten concerts a month featuring nationally touring artists and local acts. You can find local musicians performing every weekend in the brewery’s beer garden. Featured local artists include Resination, Bear Market Riot, Word Sauce, Dante Marsh, B & The Hive, and Miss Leo & Her Bluegrass Boys.

Paso Robles is conveniently situated just off the 101, and features some great local talent in the land of amazing wines, craft beers, and distilleries. The Pour House venue embraces homegrown musical talent.

Located on Pine Street near downtown Paso Robles, The Pour House has been a favorite local hangout since opening in 2009, and has been at its current location since 2012. The bar has 25 beers on tap, including a wide variety of ales, IPAs, porters and stouts, ciders, and sour and fruit beers.

It is nestled in the outskirts of downtown Paso Robles, where you can find the heart of the music scene. The owner of The Pour House, Shawn Copen, offers a hometown feel of great wines, craft beers, and talented local musicians.

“The most amazing local musicians are right here in our area,’’ says Shawn. He hosts local musicians from across SLO County, as well as from San Francisco and Los Angeles. It “blew his mind” with all the talent that was performing in his venue. Shawn says that the beer scene in this area is not leaving, so The Pour House has a great menu of fine beers, wines, and great food. His friendly staff make you feel like you’re on the show Cheers.

But it’s the music scene at Shawn’s place that has become central — there is music going on almost every night of the week! Local musicians love to play on Sundays where you will find bi-weekly Blues Jams with Rick Pittman, and on a special night, check out Truth About Seafood, a longtime favorite of the Central Coast. Another one to check out: the Carbon City Lights, a new upcoming alternative indie rock band based in San Luis Obispo. The local talent is pouring right into The Pour House! 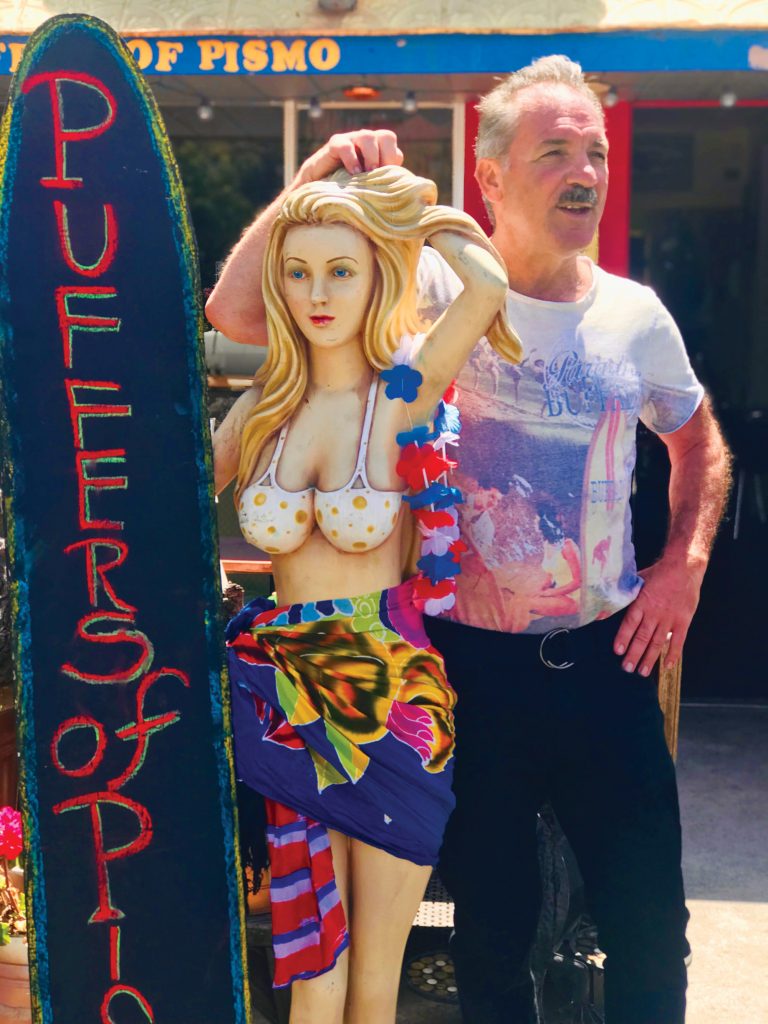 The popular beach town of Pismo Beach is known for its wineries, beaches, Monarch Butterfly Grove, Dinosaur Caves Park, and a great musical venue called Puffers of Pismo. Owner Charlie Puffer is an engaging Chicago native who has created a venue that’s become the talk of the town.

Don’t be mistaken by this modest venue, because it showcases a high caliber of music, and it just keeps getting better. And there’s live music five nights a week! You can hear great local musicians such as Miss Leo, Jeremy Best, and Jill Knight; there’s also an open mic night.
If you are lucky, you can hear Charlie Puffer talk about his life in Chicago, being a teacher in Watts, and how he landed in the wonderful place in Pismo Beach that features the best talent on the Central Coast.

Nestled on the Central Coast of California, Morro Bay is the “gateway to the north coast.” Just 12 miles north of the city of San Luis Obispo, Morro Bay has a uniquely wild setting. It sits along a natural estuary making it an amazing spot for animal aficionados, from bird watchers to sea mammal lovers. Surfers find awesome waves along Morro Rock, an extinct volcano jutting 500 feet into the sky.

In this inviting coastal town you will find the newest musical venue called The Siren. Interestingly, it has the oldest liquor license in the county (1927). It was called Happy Jacks in the 1960s and then the Fuel Dock in the 2000s. Owners Paul and Kelly Boisclair bought The Siren in 2015. Extensively remodeled with exposed ceilings and the original brick, this place has a cool vibe — and a friendly staff ready to make you feel at home.

The music stage is impressive and it is what every musician desires when playing. The Siren has its own sound engineer who works with the musicians and the high-end equipment. Performers get a professional sound system, including lights and stage smoke!

Monte Schaller, the general manager, has a reputation for booking some of the finest talent. “It is fresh and exciting with the music,” says Monte. “There is a great energy and great feel to this place, and we have a mix of local performers along with bigger name touring acts.”
There are free shows on Tuesday night with Ted Waterhouse hosting the Blues from 7 to 10 pm. Michelle Morrow hosts “Corked the MIc” every Wednesday night 7 to 10 pm. Sundays is open mic Jazz Session with Tracy Morgan, from 4 to 7 pm. Check out popular local bands like Arthur Watership, Jasper & Jade (Sept. 27) and Ragged Jubilee (Oct. 19) to X, the Blasters, Jimmie Dale Gilmore, and other nationally known acts.

There is a delightful patio, as well as upscale pub food and a tap selection of fine craft beers. The Siren is open 7 days a week from 11:30 am to closing. Enjoy one of the best places to hear music in the middle of this beach town. 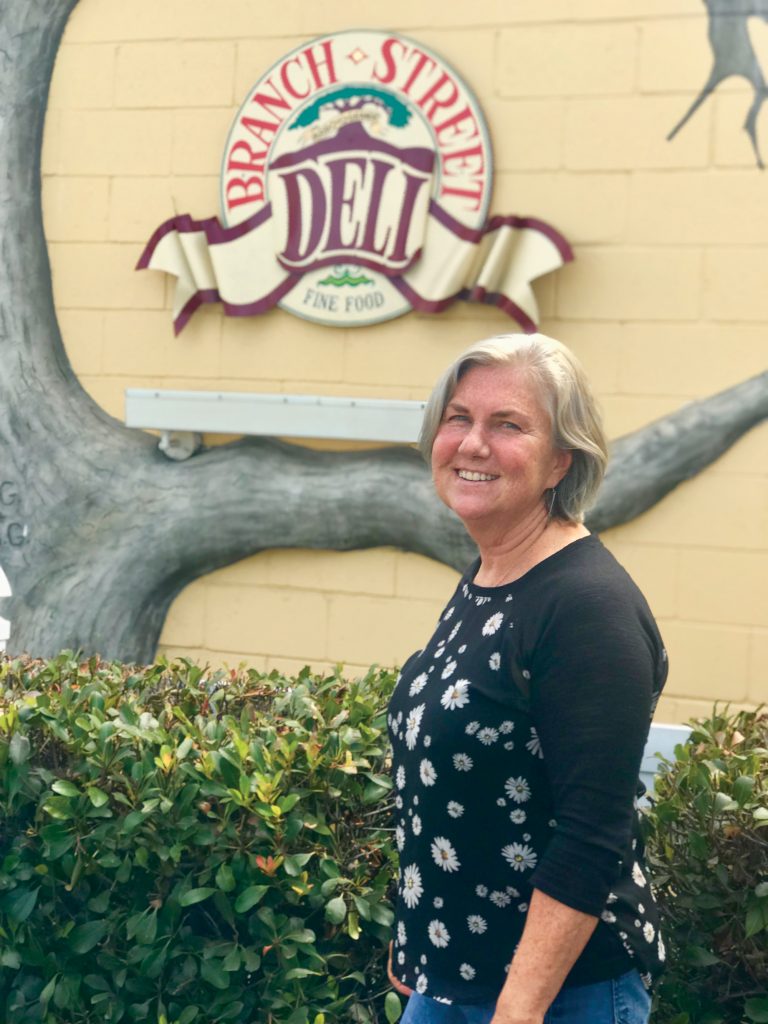 Step back in time and see what life was like in the late 19th century with a visit to the historic Village of Arroyo Grande. Branch Street is the main road, and you can find a gem of a place called Branch Street Deli.

Owner Beth deLaney took over her sister’s deli two years ago. Beth is a Central Coast local, and found herself booking musicians from her home region. Her brother-in-law created a stage outside with lights and comfortable seating where customers can enjoy a wide range of musicians.

“Music was a surprise,” says Beth. She found support from her community and other area music venues. Beth felt the generosity from her town that encouraged and supported her with her business — and the musical talent. Beth is planning on a new look for her deli and adding more to the outdoor stage in the coming year.

There is music every Wednesday  and Friday night from 5:30 to 8 pm. Old Time Jams are every other Monday, and Bluegrass Jams happen the first Thursday of the month. Here is some of the great talent featured: Stereo Chicken, Cliff Notes, Joy Polloi, Open Mic Night, and Pagan! Check out the website to see the scheduled shows.

Enjoy live music and food on the patio at Branch Street Deli. 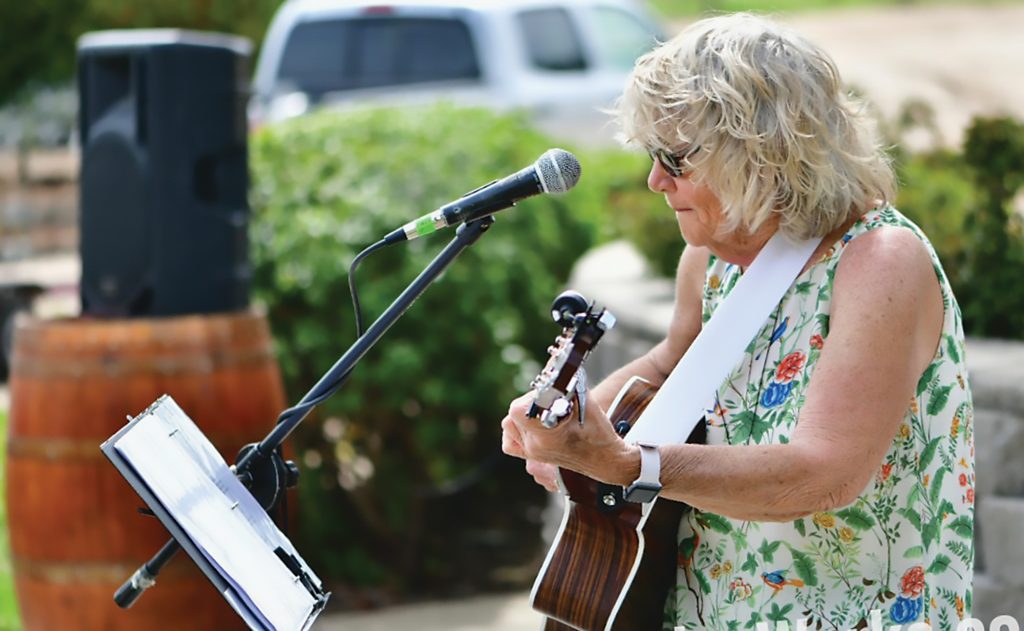 Teleri Williams, owner of Seed & Soul, opened her coffee house in a beautiful craftsman style home in the tiny oceanside town of Cambria. The inside has local art displayed, and the outside is landscaped for a relaxing break in the day. Teleri is hosting music called “Pints on the Porch” every other Friday from 5 to 7 pm. Stop in at Seed & Soul and you’ll find a relaxing place to have wonderful coffees, beers, food, and local music. If you’re lucky, you can find Cassi Nicholls, an indie singer-songwriter and multi-instrumentalist, singing her deep soulful music.