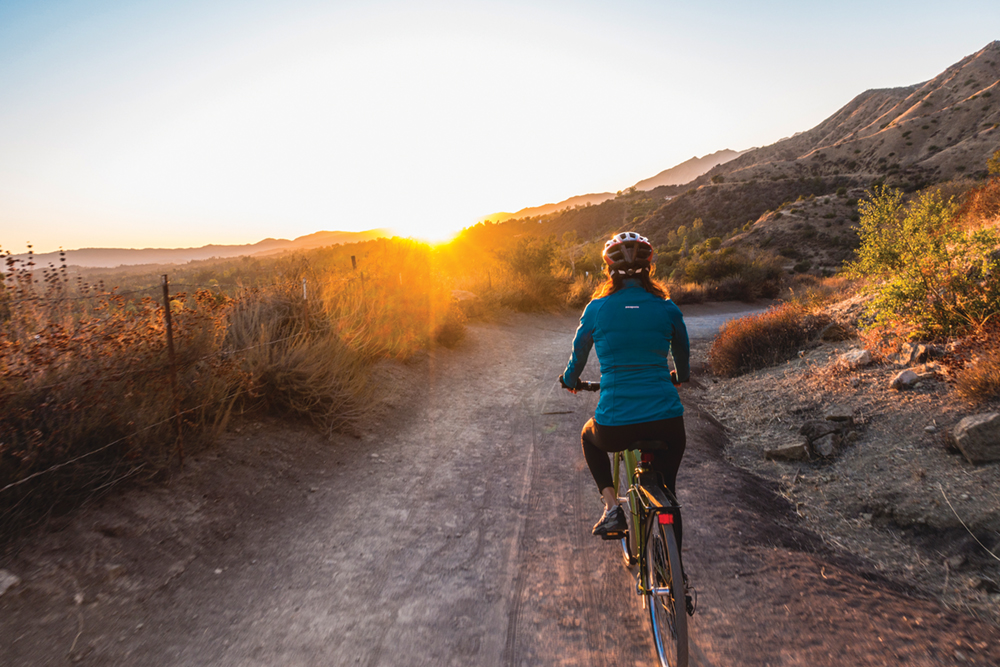 Great views of the Ojai Valley can be found on Shelf Road, and its many more rigorous off-shoots.

We’ve been pushing our bikes  up some of the hill. But we don’t mind because we are able to better appreciate the shimmering diamond light bouncing off the Pacific Ocean 15 miles away, and the Channel Islands swimming off in its hazy distance. Remnants of the devastating Thomas Fire two years ago are barely visible on the trail around us as the tenacious chaparral has rebounded after welcomed winter rains.

From Shelf Road, the fire access road that skirts the edge of Ojai’s Topa Topa mountain range, Rita Maes and I make our way to the well-marked and quite steep Fox Trail. These tight switchbacks mean we are pushing our bikes on the well-groomed, single-track trail past fragrant purple and black sage. Turkey vultures catch thermals and rise ever higher paralleling our ascent.

Since the mid-1980s, I have been rolling through the streets, bike trails, single tracks, and fire roads of Ojai and Ventura. There is something here for every level of rider — the mellow seaside cruiser, the seasoned roadie, and the ace technical backcountry pro. Whether you’re looking for a casual one-hour or a more strenuous half-day ride, here are a few of my favorite outings.

Sweat burns our eyes as we approach the junction to Foothill Trail. We will connect it with the Luci Trail for a very steep and very technical descent loop just under four miles. It’s the perfect length for    a quick escape to sample some of the amazing single-track mountain biking the Ojai Valley has to offer. These trails are housed inside what is known as the Valley View Preserve, and part of over 25 miles of valley trails maintained by the Ojai Valley Land Conservancy. 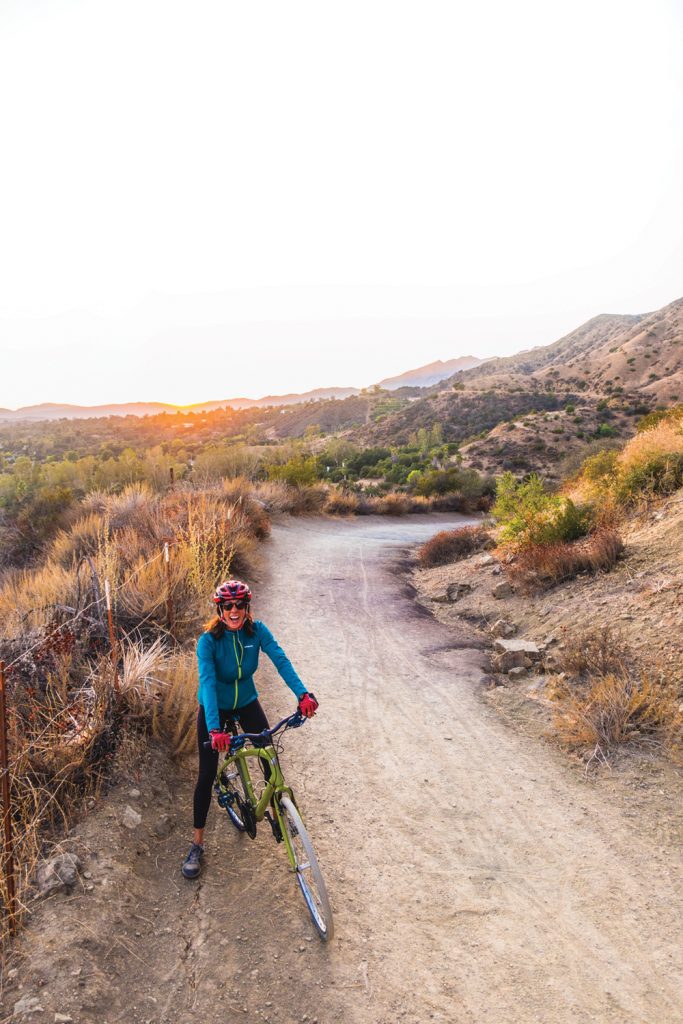 The trails are a wonderful resource for visiting and local riders, runners, and hikers alike. For a more relaxed ride, the aforementioned Shelf Road is perfect for beginners. At around two miles long, it rises above downtown Ojai and is easily accessible via either Gridley Road or Signal Street. Its gentle climbs and descents offer epic views of “Shangri-La” (aka the Ojai Valley). This lush green bowl is comprised of a patchwork of avocado and orange orchards set between thousands of oak trees, all of which is couched in by the Las Padres National Forest on three sides, and Sulphur Mountain to the south. On the far east end of the valley, the Topa Topa Mountains reign over the valley floor. And because they’re situated at the far end of California’s distinctive Transverse Range, they provide the perfect backdrop for Ojai’s famous  Pink Moment sunsets. 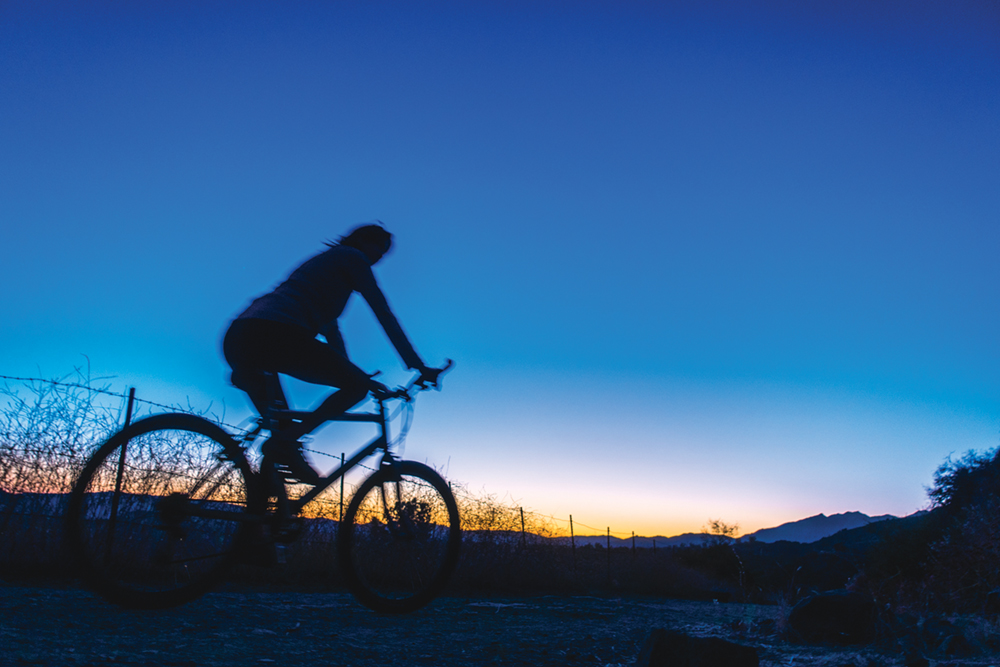 Biking in the late dusk light in Ojai. (Photo by Bennett Barthelemy)

For those who prefer pavement over dirt but still appreciate a minimal disturbance by cars, the 15-mile Ojai Valley Trail from Ojai to the beach at Ventura is a great way to spend a couple of hours. Gently sloping downhill to the beach from the Ojai Valley, “The Bike Trail,” as it is known by locals, offers ever-changing views of the valley. Not interested in making the full loop from Ojai to Ventura and back? Connect with the Gold Coast Transit bus, which has room to load a few bikes on their rack on a first-come basis for the passage back to Ojai. Side note: Until Jan. 20, 2020, the chunk of trail skirting the communities of Oak View and Casitas Springs will be closed to allow for construction of a new bypass storm drain facility. See ventura.org/parks-department for a map of the detour, or simply plan to take Santa Ana Boulevard to Santa Ana Road, and reconnect with the Ojai Valley Trail just south of Casitas Springs. 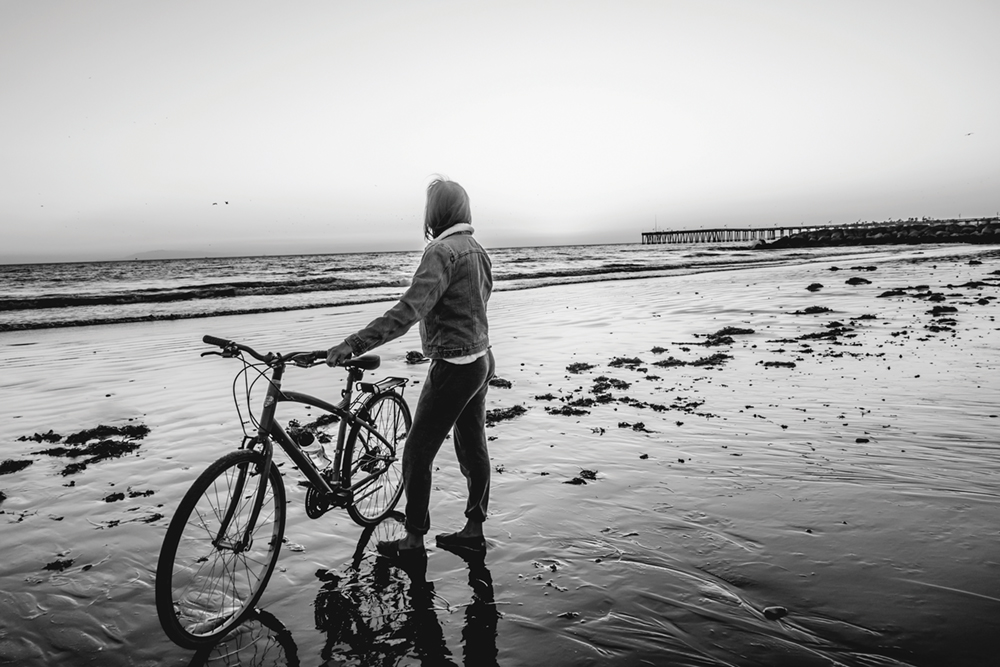 Take a detour off the trail and dip your toes in the sand near the Ventura Pier. (Photo by Bennett Barthelemy)

My favorite portion of the paved Ojai-to-Ventura trail — especially during the late afternoon — is at its end, where it comes to a T-junction. From here at the ocean’s edge, there are several miles of designated bike trails hugging the coast. They begin at Seaside Park just beyond the Ventura Pier, and continue to Emma Wood State Beach to the north. After a lazy ride past Surfer’s Point, the Ventura River spills to the sea where there are plenty of pelicans, shorebirds, kite surfers, and stand up paddle boarders all sharing the fading light of another famous Ventura sunset. For those seeking libations along the way, stop at the Ventura Pier for a pint at the MadeWest Brewery Taproom. With indoor and outdoor seating, the sunset veranda views can cap your ride perfectly. 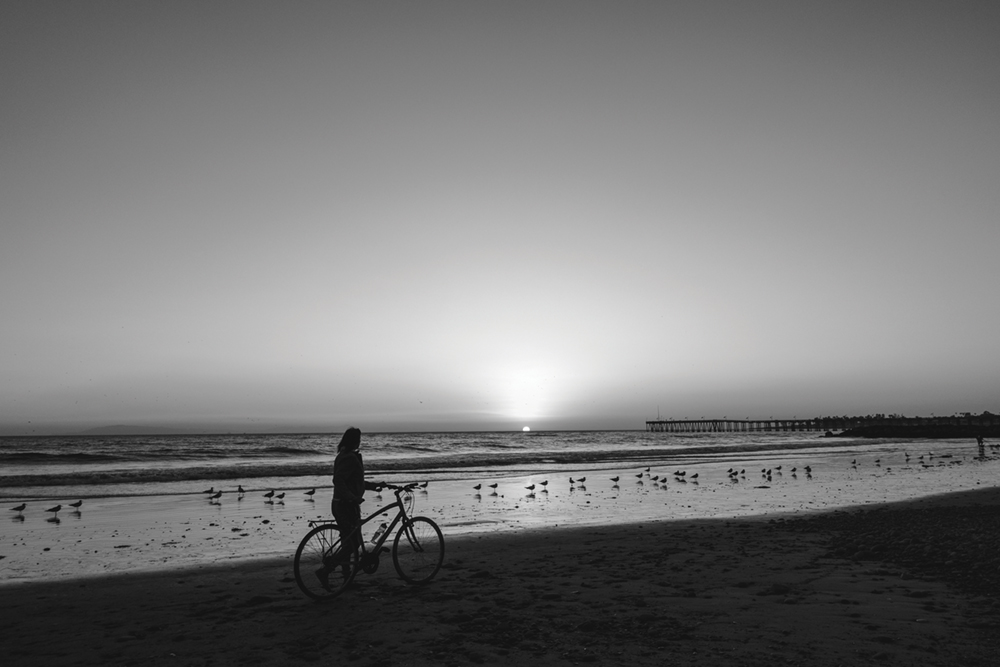 A local’s secret about the weather: Almost any day of the year in Ojai can surprise you with 80-plus degree temperatures; and, during the summer, 100-plus degree days are not unheard of. Mornings and evenings, therefore, are ideal for an active escape into the hills. There is no water out there, so be sure to bring your own, and plenty of it. Ventura tends to be 20 degrees cooler on average than Ojai, however, making a nice escape from the heat. Being coastal, Ventura mornings until early afternoon can hold a good bit of fog, especially in spring. It might be clear and warm in Ojai, but chilly and socked in on the coast. So along with extra water, bring layers, too. 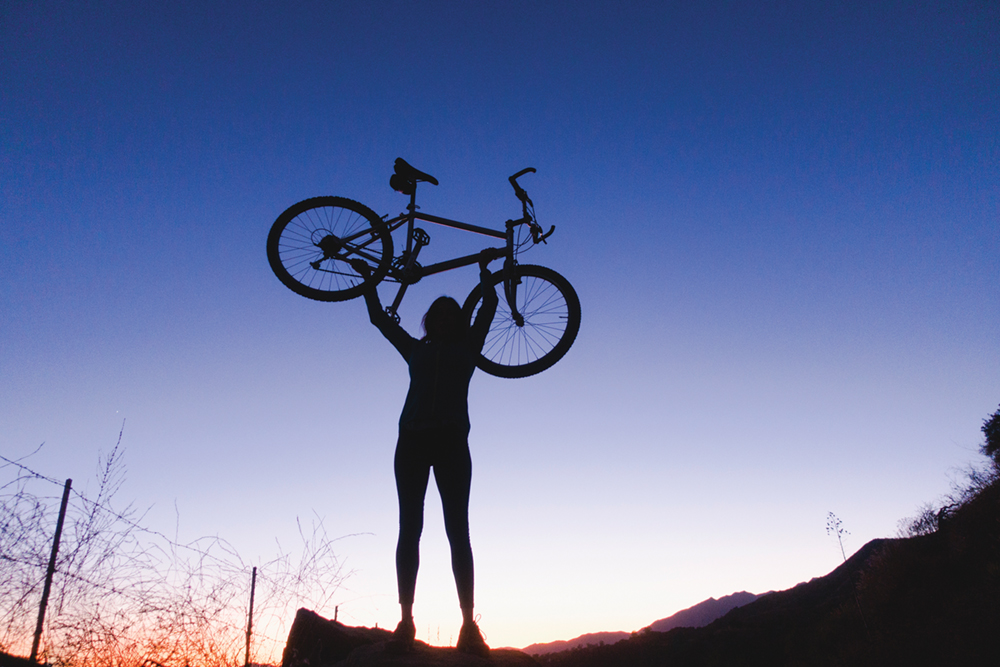 • Ventura County Transportation Commission website hosts a map of all the bike lanes in the county as well as basic repair stations with compressed air for the riding public: goventura.org/getting-around/bike