Elephant seals are creatures of extremes. From their massive size to the depths of their dives, these mammals live to go big. Most elephant seals haul out on islands, but there are some spots where they come to the mainland in substantial numbers. One such spot is the Piedras Blancas Rookery, located in northern San Luis Obispo County just 5 miles north of Hearst Castle State Historical Monument©. 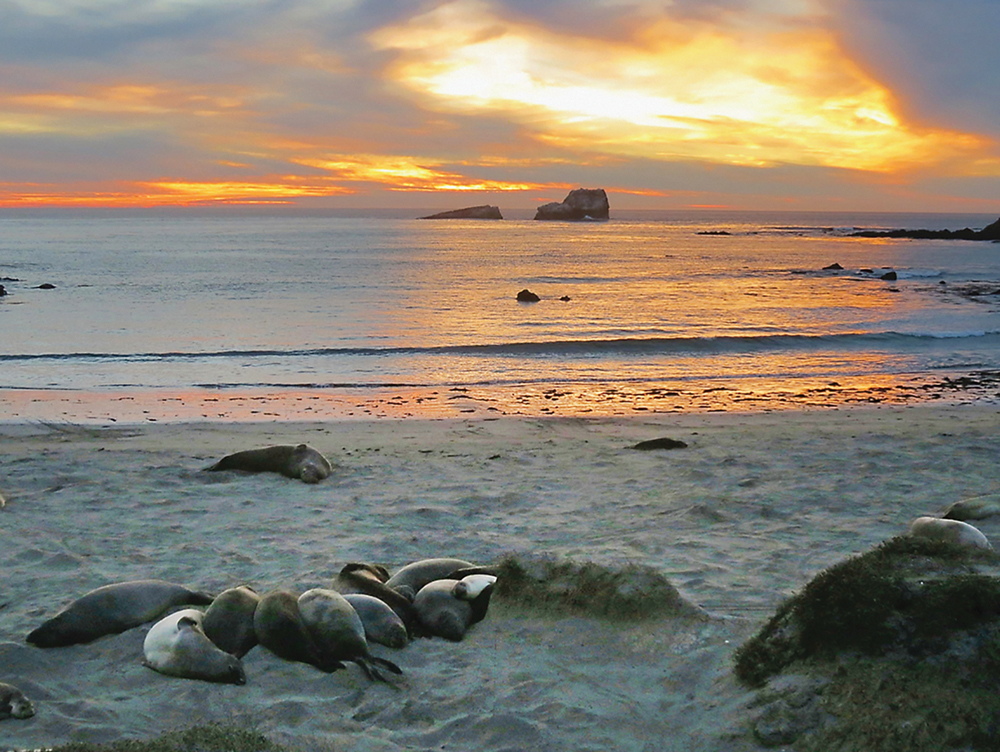 Late fall to early spring is the perfect time to view these nautical beasts who mate, pup, and fight for territory (by the thousands!) on the beach in San Simeon. But no matter when you visit, you’ve got an excellent chance at a seal sighting.

What’s So Special About Elephant Seals? 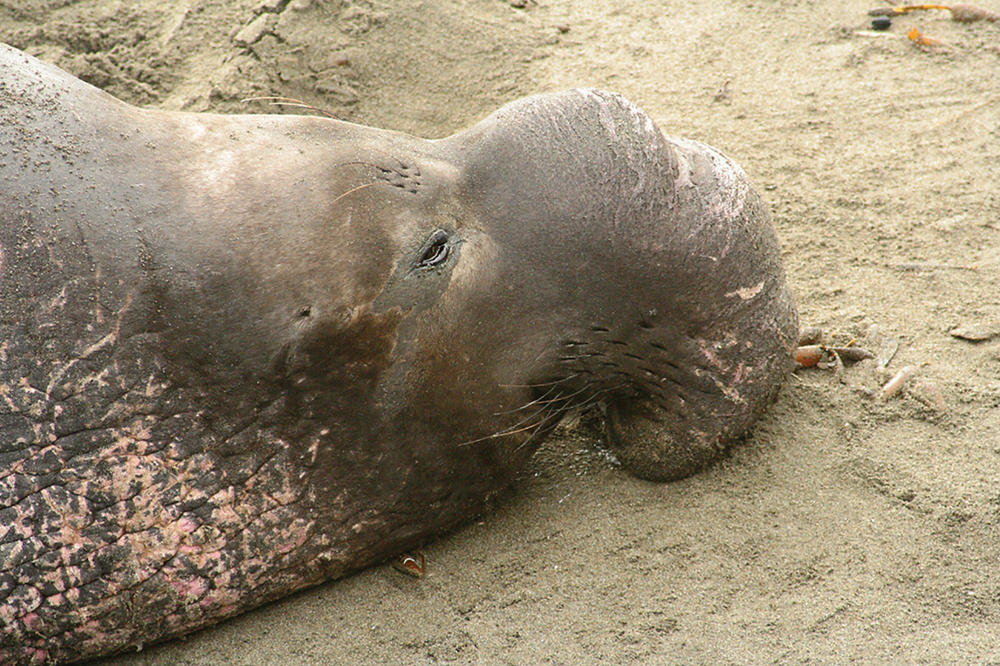 Largest of all (but not necessarily the fairest), northern elephant seals are the biggest pinnipeds in the northern hemisphere. They range along the Pacific Coast from the northern tip of Alaska’s Aleutian Islands to the southern tip of Mexico’s Baja California. Fully grown males can reach lengths of more than 13 feet and can weigh 4,500 pounds. Females are smaller than males, but still impressive, reaching lengths up to 10 feet and weighing up to 1,300 pounds. Even their pups are big – newborn pups weigh an average of 65 pounds at birth. Within a month, they have grown to 250 pounds, nourished by mother’s rich milk. At around 3 years of age, the nose of a male elephant seal begins to develop into a large, fleshy proboscis, which continues to grow until the animal reaches sexual maturity around 7 years.

They have one of the longest migrations of any mammal 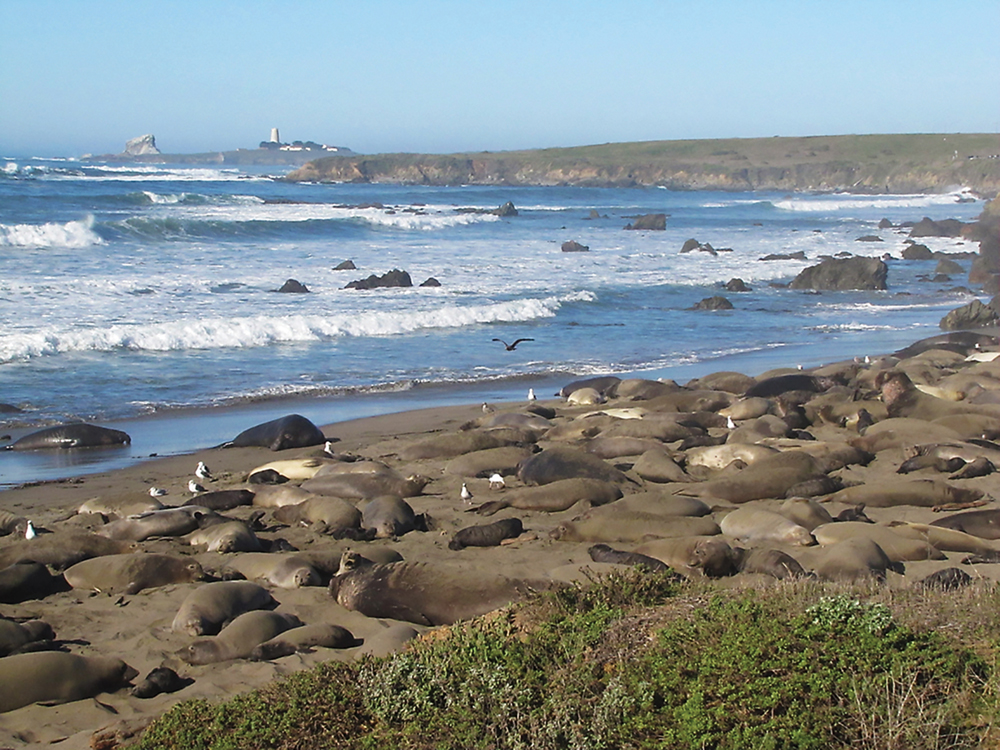 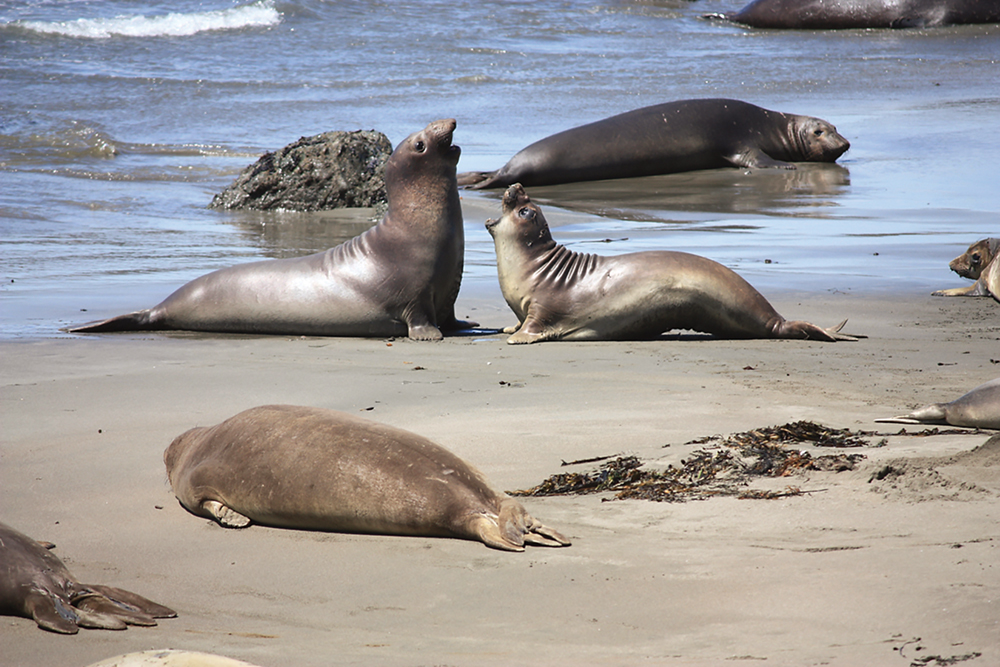 Elephant seals regularly dive to 1,000 to 3,000 feet. No light reaches these dark depths, where they feed on fish, squid, eels, rays, and sharks. Elephant seals have adaptations that allow them to survive the pressure of the deep sea, including specialized blood that holds much more oxygen than humans, as well as collapsible lungs. They can dive without taking a breath for as long as two hours. 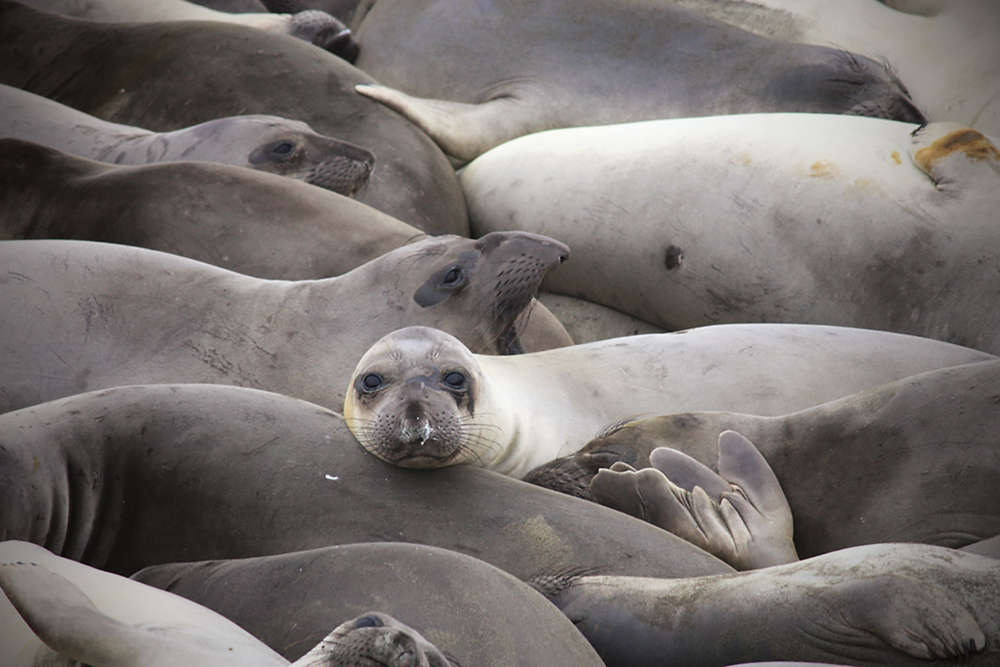 In the 1800s, elephant seals were aggressively hunted for their blubber, which was rendered down into oil used for lighting lamps and as lubrication for machinery and leather. By 1900, the surviving elephant seal population was estimated at less than 100 individuals. Laws to protect marine mammals from overhunting were successful, and 100 years later, the population has recovered.

When they come to shore, they don’t eat 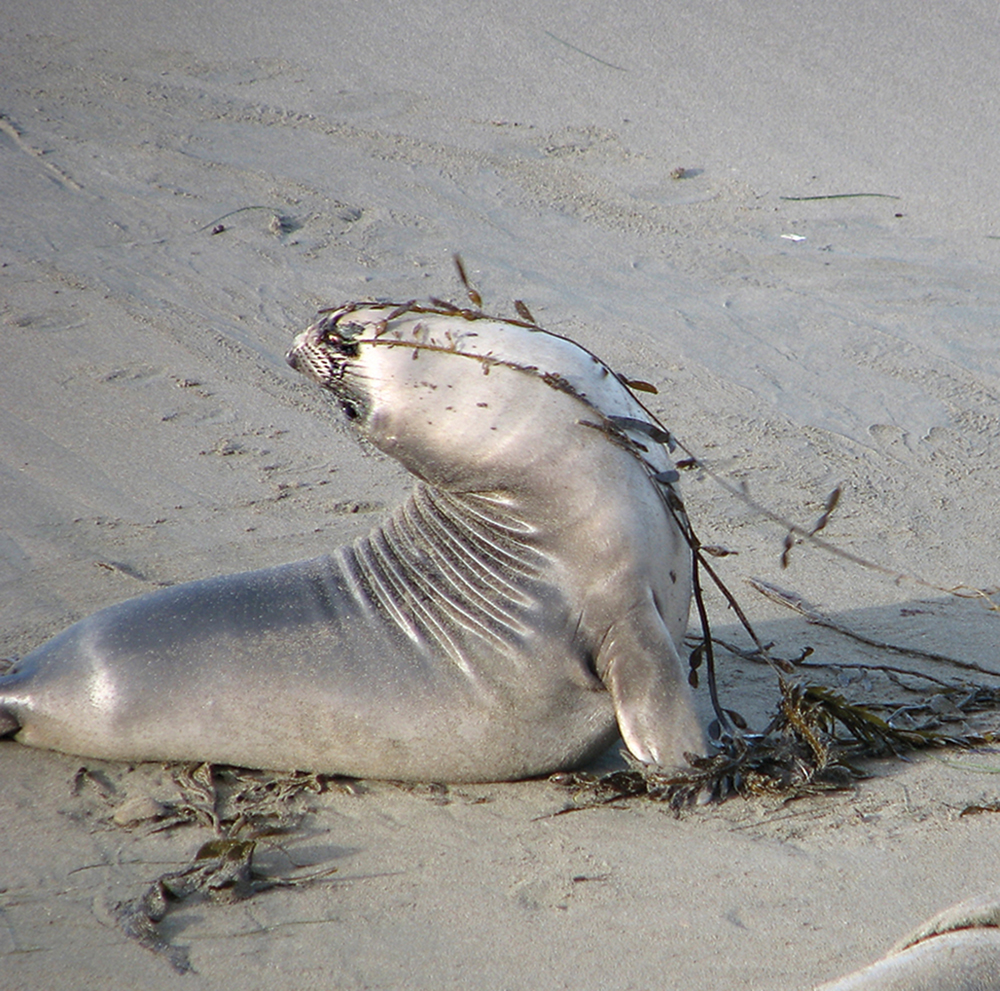 Elephant seals spend eight to 10 months at sea, coming ashore twice a year. When on the beach, they fast, living off the prodigious blubber acquired when foraging in the ocean. During the annual pupping and mating season, male elephant seals fast for up to three months, losing as much as a third  of their body weight. Nursing mothers fast for at least a  month, conferring 25 percent of their body weight to their growing pups. 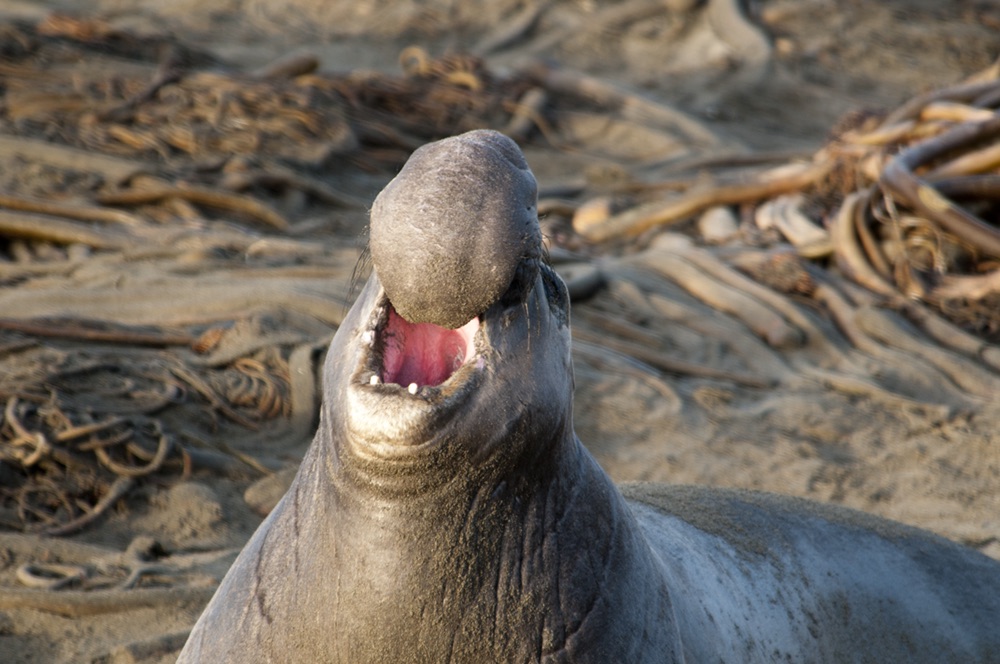 Elephant seal males vocalize to let other males know of their presence. The enlarged snout enhances the volume of their calls, which can be heard from half a mile away. The sound of a bull’s vocalization has been compared to the sound of starting up a poorly-tuned motorcycle in an empty garage. Mothers and pups bond through vocalization, which helps them stay connected in the crowded rookery. During the pupping season, the air is filled with raucous sounds. 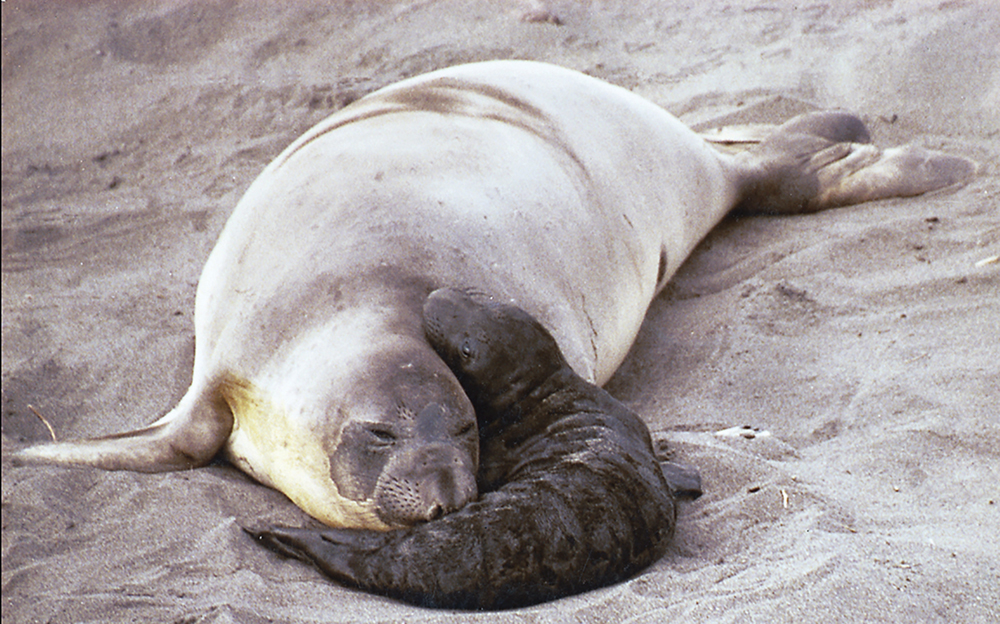 Due to overhunting in the past, all marine mammals are protected by law from any sort of harassment. Violations can carry a hefty fine. Enjoy watching elephant seals and other marine mammals from a safe distance. 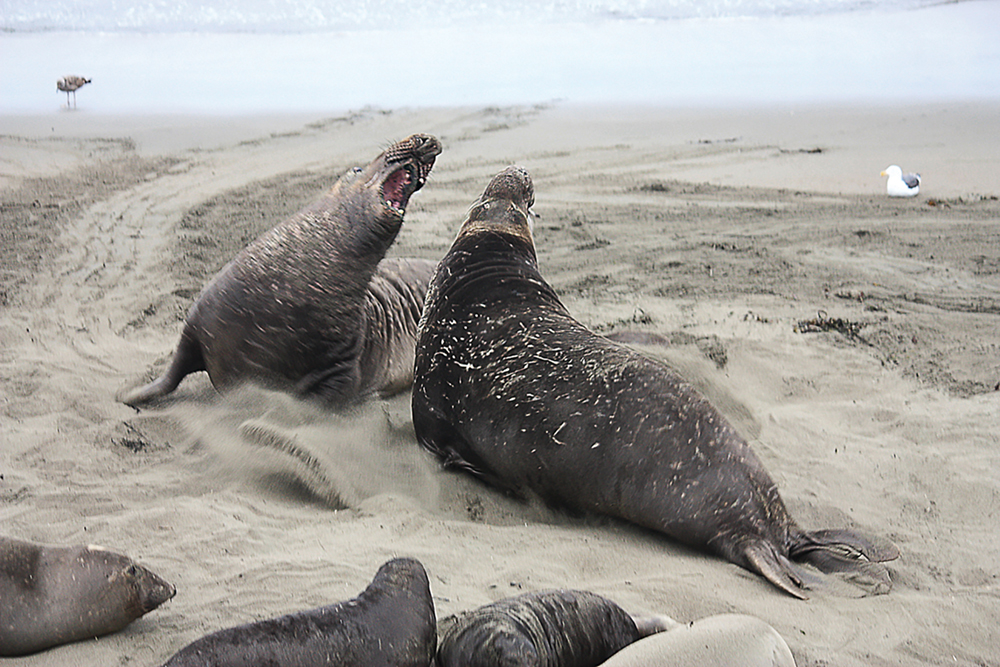 They have their own interpreters  At the Piedras Blancas Rookery in San Simeon, volunteers from the nonprofit organization Friends of the Elephant Seal are available to answer questions and point out interesting behaviors. Their website provides information and hosts a webcam for real-time viewing: elephantseal.org.

Something is happening year-round

January: The peak of pupping occurs mid-January. Mothers nurse their pups for about a month.

February: By mid-February, females have weaned their  pups and are ready to mate. The peak of mating season is  in mid-February.

March: By the first of March, adults have left the beach to  feed far from shore, leaving the newly weaned pups (called weaners) to survive on their own. The pups live off the body fat they acquired when nursing, gradually gaining swimming and social skills.

April and May: In April, adult females return to the breeding beaches to rest and molt their fur. The molt lasts for about a month, then they return to the sea. Most weaners also depart  at this time.

June to August: Males return to their breeding beaches to molt and rest. Again, the molt lasts for about a month, then they return to the sea to forage and feed.

August to October: Most adult elephant seals are feeding at sea, although juvenile males and females do show up on the beaches (fall’s juvenile haul out season).

Where to see elephant seals

During their twice-annual stays on the beach, most elephant seals haul out at the Channel Islands National Park and at islands off Baja California. In northern California, elephant seals are viewable at Año Nuevo Island and the Farallon Islands. As island colonies became overcrowded, elephant seals began using coastal beaches for pupping, breeding, and molting. Point Reyes National Seashore and Año Nuevo State Park both have mainland rookeries and offer elephant seal viewing opportunities. 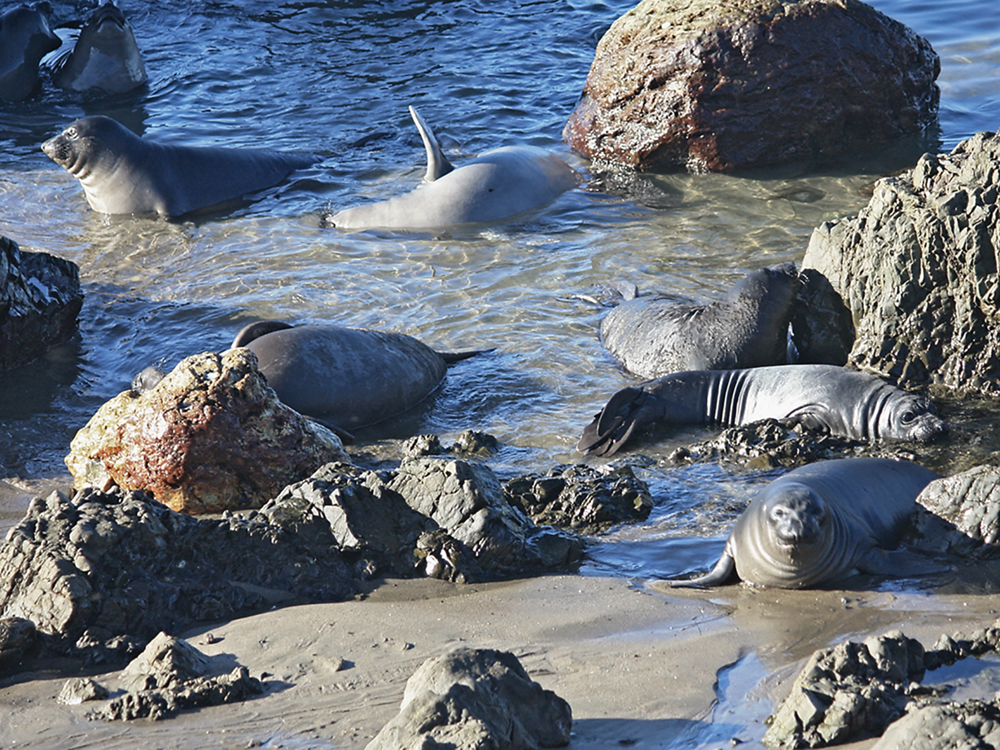 But if you’re looking for a quick stop-off with a big pay-off, San Simeon is tops. Its Piedras Blancas Rookery is the largest and southernmost of the mainland hauling areas. During January and February, as many as 7,000 seals occupy a 10-mile stretch of coastline. Two convenient viewing areas provide parking and easy access to boardwalks positioned on the bluffs above the breeding beaches. It is free, and no reservations are necessary.  Learn more about the Piedras Blancas elephant seal rookery at elephantseal.org. 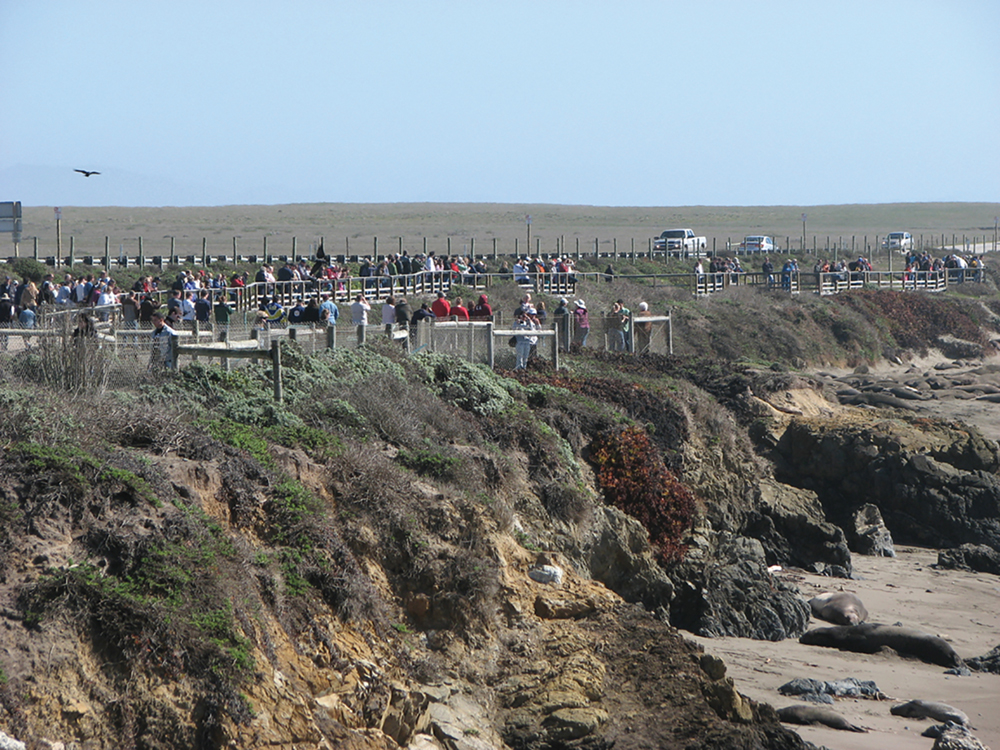 Other things to do on the SLO coast

San Luis Obispo’s North Coast is a haven for “getting away from it all.”  There are no big-box stores, no movie theaters, and plenty of peace and quiet.

Look for the Hearst Ranch Zebras:  William Randolph Hearst was famous for his private zoo. Legend has it that some of the zebras escaped and are breeding in the open spaces south of Hearst Castle. The zebras are viewable year-round; spring is the best time to look for foals.

Piedras Blancas Light Station:  Built in 1875, the light station serves as an aid to navigation for ships and private vessels of all kinds traveling up and down the coast of California. Tours include a history of the lighthouse and surrounding area, as well as stunning views of the Piedras Blancas (White Rocks) for which the lighthouse is named. piedrasblancas.org

Visit Cambria:  During the month of October, enjoy the whimsical efforts of the Cambria Scarecrow Festival. cambriascarecrows.com.
Check the Chamber of Commerce website for upcoming events and activities. cambriachamber.org