What is a luffa? And where do these things come from? Curiously, the answer can be found just off the 101, in the small town of Nipomo. It is there that Deanne Coon-Saucerman and Brooke Gamble grow these unusual vegetables at The Luffa Farm. Yes, you read that right, there is a luffa farm in Nipomo! 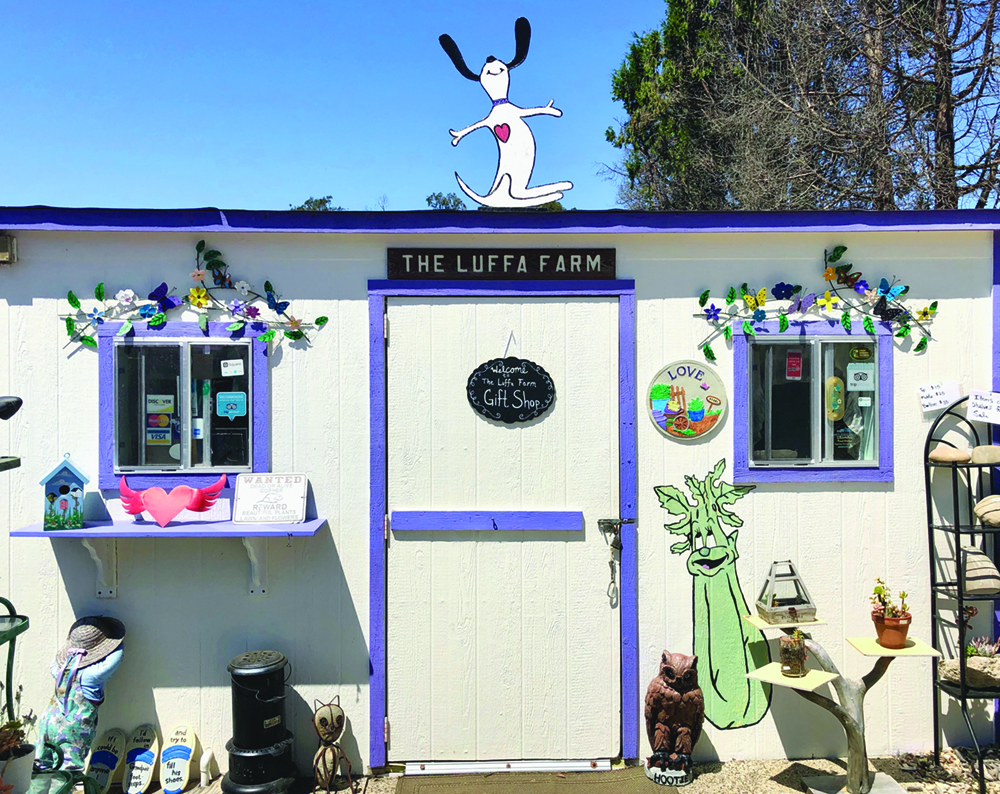 Photo by Eric Quezada After your tour, be sure to stop by the gift shop! Find soaps, lotions, local lavender, and of course, luffa!

Brooke has been with Deanne, owner and founder of The Luffa Farm, since the very beginning. She was able to assuage my curiosity about this interesting gourd-like sponge that has been used for thousands of years to exfoliate and make skin beautiful. I had always assumed luffa came from the ocean, and as I began my quest to know more about these curious “sponges,” I came to find out that I was not the only one.

Deanne’s farm began in the Bay Area many years ago as an experiment, when a friend from college had a project she was working on for school. She was given a mystery seed and she was supposed to figure out what it was: plant it, grow it, and find out what it would sprout into. She recruited Deanne, who was only too happy to help. 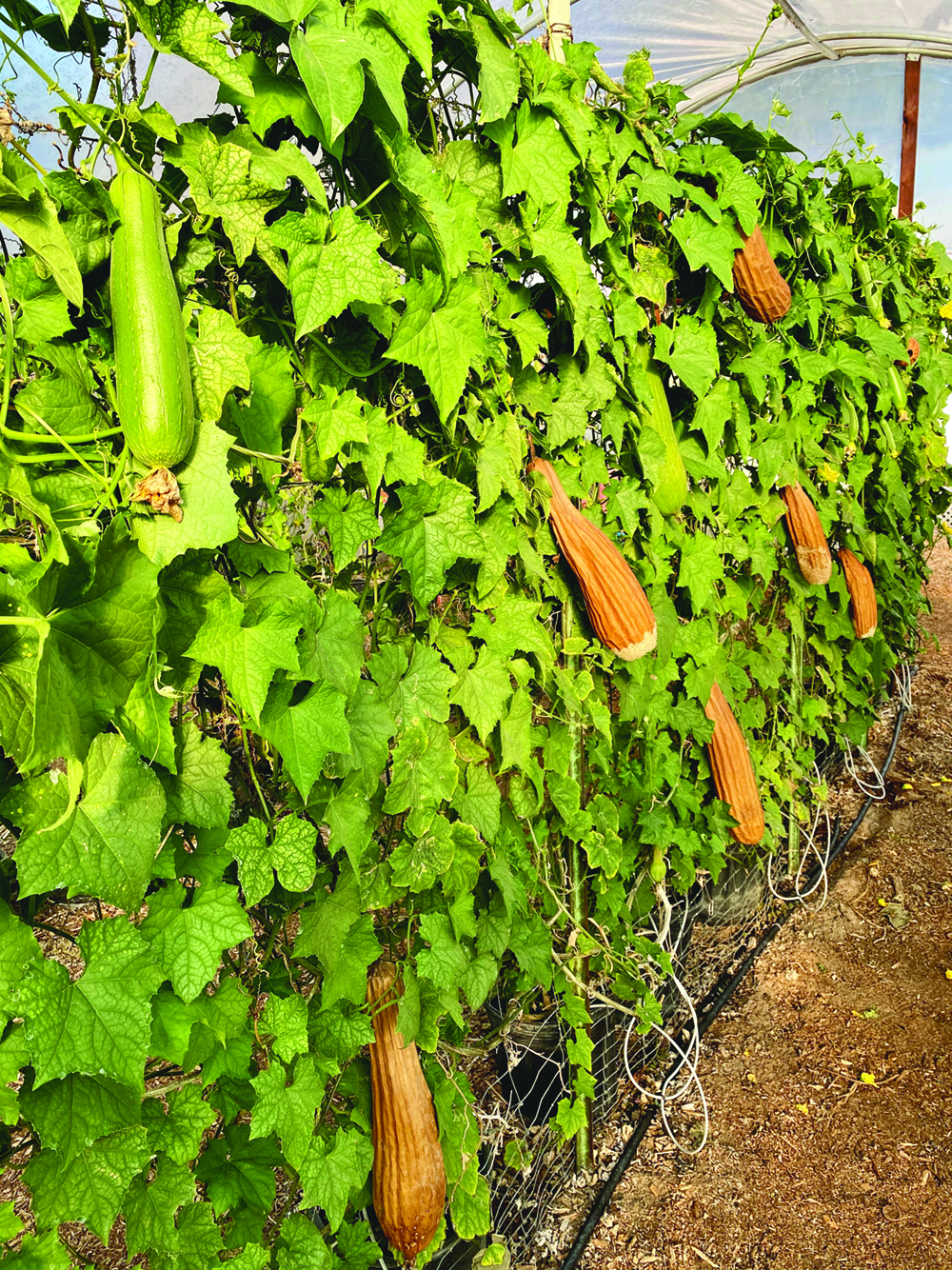 Photo by Eric Quezada The luffa looks like a cucumber or gourd as it grows, until it dries on the vine and turns brown. Then it’s harvest time!

They planted the seed in Deanne’s back yard and soon thereafter Deanne noticed tendrils growing. So she put up a trellis and continued to watch it grow. At first, it looked a lot like cucumbers, but after about three months, it started to look much like a type of squash. As the plant continued to grow into gourd-like shapes and change color, it became obvious that it was neither cucumber nor squash. After some trial-and-error brought them no answers, they decided to let the plant die.

The plant changed from yellow to light brown and then darker brown on the vine, and became lighter in weight. But strangely, it didn’t rot like they expected. Curious, they let the mystery plant continue to die to see what would happen. One day, they picked one to see what was inside. It was light as a feather and felt and looked a lot like a maraca. It even rattled when shaken. Mystified, they wondered, what on earth could this thing be?

They took the peel off — which was surprisingly easy to do — and noticed the perfectly shaped “sponge” inside. That’s when the light bulb came on and they realized that what they were holding in their hands was a luffa. Like many of us, they had seen luffa in the store before, but never thought that it grew from the ground inside of a gourd.

Delighted at this discovery, Deanne started growing luffa as a hobby at first, and when she moved to Nipomo in 1999, she decided to grow them on a larger scale and sell them as a little side business.

The first place Deanne took the luffa to be sold was Long’s Drugs (the only drug store in town at the time). She printed little labels with “Grown in Nipomo at The Luffa Farm,” written on them. People buying the luffa became curious as to what a Luffa Farm was, and suddenly Deanne started to get visitors. People would just show up, she remembers, curious and surprised to see that these things were really growing on vines. Eventually, in 2001, Deanne opened her farm to the public, and not long after that, her little side business became a full-time occupation. She now sells between 3,000 to 4,000 luffa a year, and has many visitors year-round. 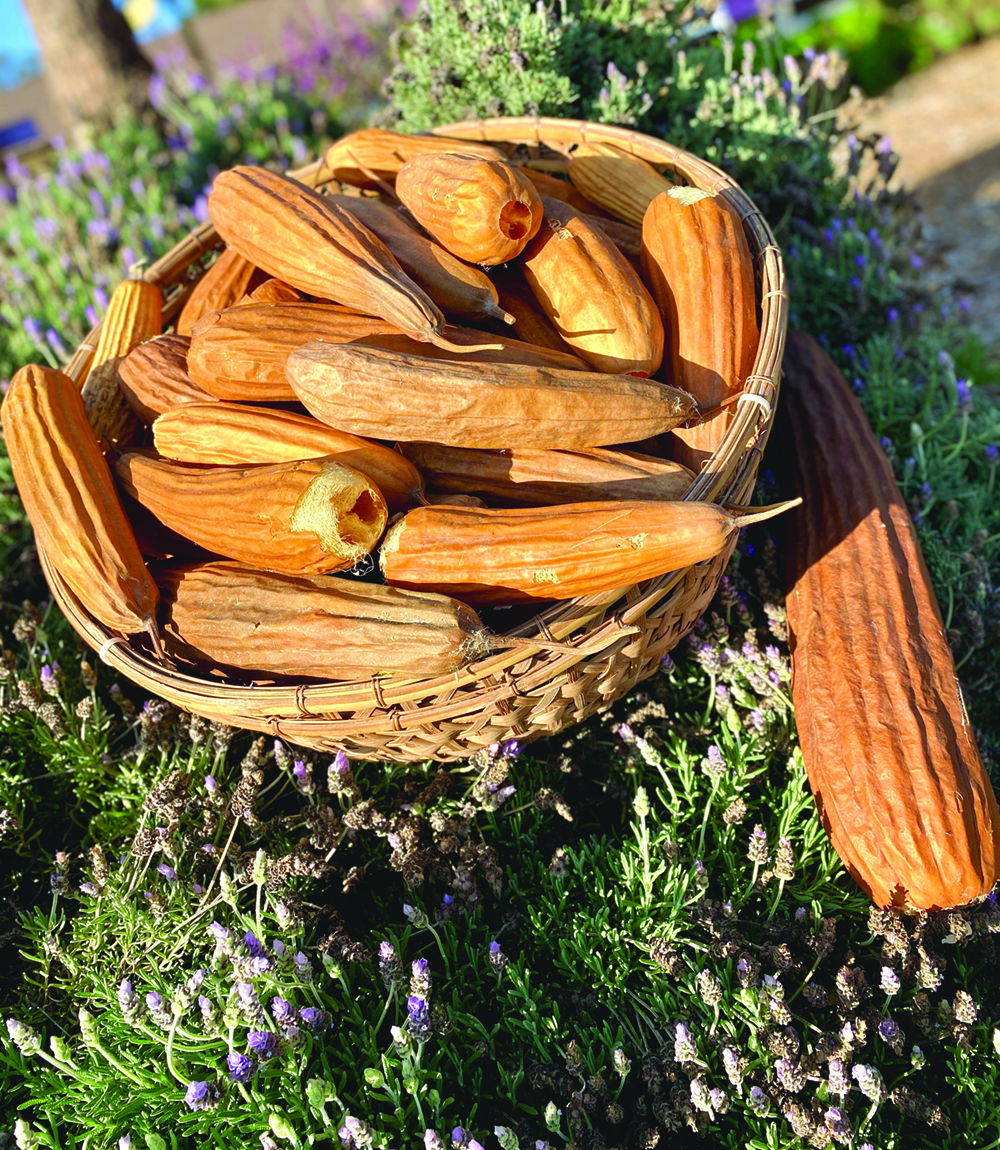 What is interesting to note is that luffa is actually a tropical gourd, usually grown on the Equator; it thrives in the warm moist temperatures. It takes a lot of work and resources to grow luffa in our dry California weather, but with some determination, Deanne was able to perfect her craft. They are grown with natural light inside greenhouses to protect them from the cooler evening temperatures of the Central Coast. The luffa takes about six months to mature from seed to harvest. Interestingly,  if you harvest it right when the flower dies, you can eat it just like any other squash, although it is rarely consumed in the Western world.

Luffa will keep growing as long as the vine can support them; they can grow anywhere from six inches to two feet in size. You never really know what you’re going to get, according to Deanne. A peculiarity of the luffa plant is that once the luffa has matured, the vine will start sucking the moisture back into itself, thus drying the gourds while they are still attached. They dry while still on the vine.

At this point, they are peeled, seeded, and cut to size (about five inches each). They are then washed and dried again for about a day before they are ready to be sold.
Harvest typically takes place a couple of times per year, but the peak time is in November. You can go and be part of the process as part of your tour, but it is always good to call ahead to inquire about the harvest – there are always variables with the luffa, and you never quite know the exact timeline.

What is especially lovely about Deanne’s luffa is that they are soft! Have you ever bought a luffa from the store and taken it out of its wrapper? It is very hard, and even when you wet it, it still remains a little stiff. That is because luffa usually comes from abroad and is under strict cleaning guidelines that require it to be fumigated, which unfortunately ruins the texture of the luffa. You will love how soft The Luffa Farm’s product is in comparison, and even though they are not certified organic, at the farm they practice organic gardening with everything they grow. 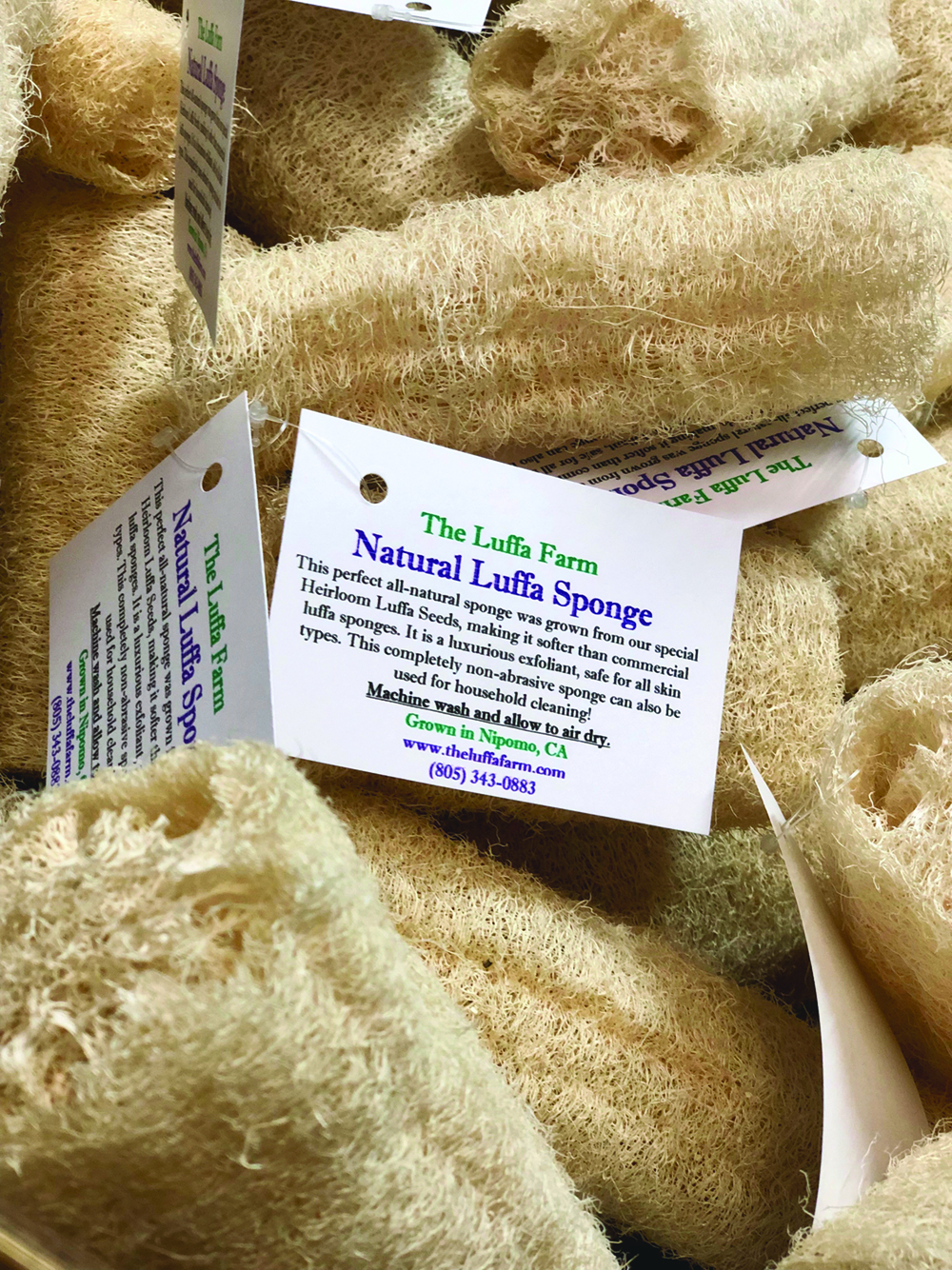 Photo by Eric Quezada Soft and naturally grown, luffa are a great option for exfoliation — and household cleaning too. Who knew?

The Luffa Farm is open to the public for informal tours that usually take 15 to 20 minutes; no reservations are necessary. You’re also welcome to just walk around the farm and see things for yourself. They offer more formal tours for larger groups, for which it is best to call ahead. Either way, visits are free — although you’ll be hard-pressed to pass up the farm shop, which offers not only luffa, but also soaps, lotions, and herbal products like lavender neck wraps and eye masks. Most of the lavender is grown on site (and when it is not, it is always local) and everything is vegan and made with natural oils.

Pets and kids are welcome, making The Luffa Farm a fun outing on your CA-101 travels.

I will never look at a luffa in the same way after knowing more about it. I feel even better about using this natural beauty aid that is grown right here, in our own neck of the woods. My skin is already thanking me.