History lives in the Heritage Valley

Nestled in the hills south of Ventura lies Heritage Valley, a pastoral community including Fillmore, Piru, and Santa Paula. Home to historic train stations and Victorian homes, murals and museums, one-of-a-kind shops and recreation opportunities, this peaceful corner of the Central Coast has something for everyone.

Incorporated in 1902, Santa Paula sits on Chumash land, and was settled primarily by those in oil extraction, film production, and citrus growing. Santa Paula featured the first train depot in Ventura County, a beautiful iconic red building built in 1887 that now houses the Santa Paula Chamber of Commerce. Downtown Santa Paula is also home to a burgeoning corridor of murals featuring established and up-and-coming artists. 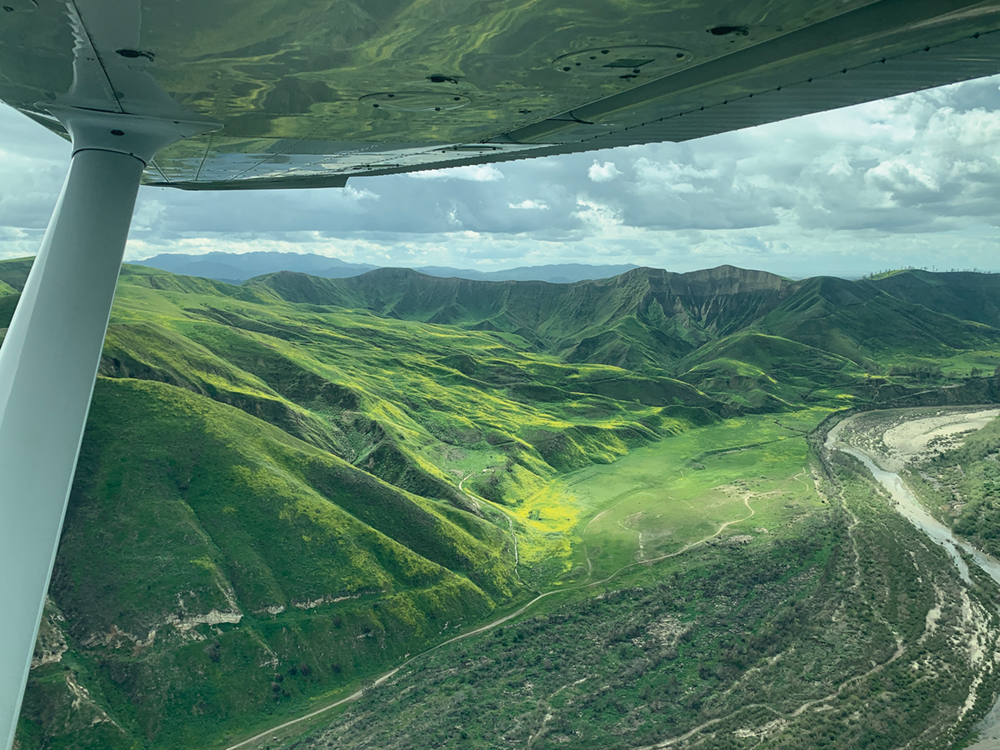 The Heritage Valley’s rugged landscape south of the Santa Clara River is perhaps best viewed from the air. Aviation fans in search of these views can head to the Santa Paula Airport for lessons. (Photo by Judy Phelps/CP Aviation)

Founded by Ralph Dickenson’s grandchildren, the Aviation Museum of Santa Paula preserves Dickenson’s contribution to the area and features several models of planes that were en vogue back when the airport was built. Multiple hangars display vintage cars, motorcycles, one-of-a-kind aircraft, photos, and memorabilia; a gift shop and restaurant are handily located onsite.

Located at the Santa Paula Airport
For more: (805) 525-1109 or aviationmuseumofsantapaula.org

This privately-owned airport took flight in 1927 when rancher Ralph Dickenson built a hangar and dirt airstrip on his property. Locals began using Dickenson’s property as airplanes became more popular, so he and 20 other ranchers pitched in and purchased a plot of land just to the south of the city to build a community airport.

“Learning to fly is a life-changing experience that opens many doors to things one never thought about. Flying gives you a different perspective in the world,” says Phelps. “Santa Paula Airport is unique, and like no other airport I’ve visited.”

This nonprofit, started in 1996, takes “high-energy” shelter dogs and transforms them from rescued to rescuer. Its home base in the hills of Santa Paula trains them for over approximately a year with first responders to become search and rescue dogs, saving lives in the wake of natural disasters or infrastructure failures. This program is free for firemen and first responders. Of the dogs trained, the Foundation has an 85 percent success rate; dogs who don’t complete training are placed in lifetime homes. Search Dog Foundation is the only national organization using rescue pups for this work, and so far, has trained 229 teams that have been deployed in 193 disasters.
While the training facility is typically closed to the public, they do occasionally offer exhibitions.

The National Disaster Search Dog Foundation is at  6800 Wheeler Canyon Rd, in Santa Paula
For more: (888) 459-4376 or searchdogfoundation.org

In downtown Santa Paula there is a hidden gem, an art alley featuring nine original and eight new murals from both established and up-and-coming local artists. The older artists turned the rights for the murals over to the Santa Paula Chamber of Commerce, which now plans to build on this momentum.

“We’re going to start a foundation for the arts by the end of the year,” says John Marquez, director of the Santa Paula Chamber of Commerce. “We’re starting a consortium of a mix of young and older artists to give a new perspective to the rich art in our community. I actually coached one of the artists in Little League when he was 8 or 9, and now he’s 33 and doing these murals.”

The murals are located throughout the downtown Santa Paula area; see visitsantapaulaca.com for a list and their locations.

This is not your average retail experience! Loose Caboose sells a variety of live birds, a colorful cornucopia of koi in ponds scattered throughout the property, garden and aquatic supplies and décor, more jams and preserves and types of honey than one could imagine, nuts and dried fruit, gifts, and memorabilia. And, in autumn, they have this writer’s favorite pumpkin patch and corn maze in Ventura County, available to the public around Halloween.

When the Southern Pacific Transportation Company built a line through the Santa Clara River Valley in 1887, the downtown corridor of Fillmore sprang up. A bucolic, old-fashioned small town, railways are still an integral part of life in Fillmore. The downtown area features many historic homes, and the town is bordered to the north by the Topa Topa Mountains – home to the Sespe Condor Sanctuary, where this endangered California icon is being brought back from the brink of extinction. 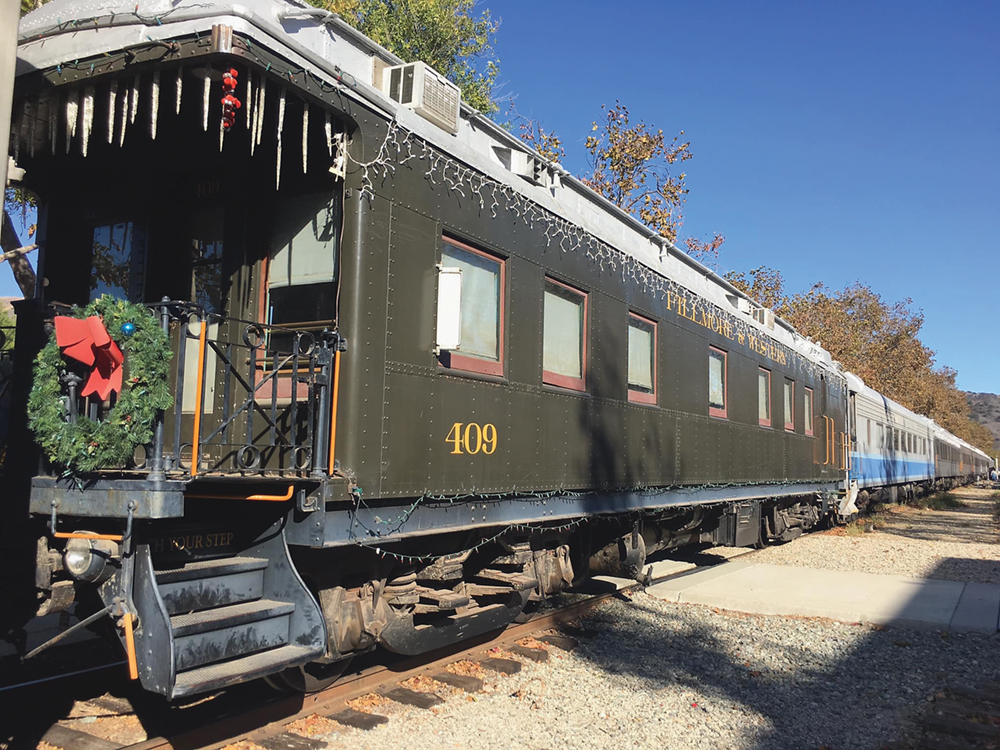 Few things evoke the picturesque parts of our Western past more than vintage trains and railways, especially in a community birthed by them. Fillmore & Western Railway started as a resource for film production, but now also offers murder mystery dinner train rides and special tours throughout the year. October’s Pumpkin Liner tour takes you to either the Loose Caboose, or to Prancer’s Pumpkin Patch, with 10 acres of pumpkins, a hay pyramid, farm animals, and more. For all rides, reservations, face masks and social distancing are required.

Many of the original Victorian homes built around 1887 when Southern Pacific built its line – along with farmhouses and historical Craftsman-style homes built relatively later – still stand in the downtown corridor of Fillmore, forming Old Town Fillmore. This slice of preserved history has served as the backdrop for film and television scenes, and some of the original railway buildings have been preserved at the Fillmore Historical Museum. This district is also home to a historic one-screen movie house, the Fillmore Towne Theatre, where Mary Pickford once performed and silent films were shown. Though it no longer shows movies, it’s thought to have been one of the oldest continually operated movie theaters in the U.S.

Technically an unincorporated area and not an official city, Piru lies about 7 miles east of Fillmore, and takes its name from an indigenous Tataviam word for the tule reeds with which they crafted baskets. Unfortunately, missionary life did anything but “save” the Tataviam tribe, and the last self-identifying member, Juan Jose Fustero, died in 1921. A slice of early colonial life in the region is preserved in the form of Rancho Camulos, a National Historic Landmark, and one of the original ranchos in the area.

In the Los Padres National Forest sits a man-made reservoir formed in 1955 when the Santa Felicia Dam blocked off a tributary of the Santa Clara River. Home to roughly 60 acres of recreation area, Lake Piru now features 238 campsites, 66 boat slips, and nearly endless opportunities for wilderness experience, adventure, and memories to last a lifetime. Boating, fishing, hiking, kayaking, wildlife spotting, and more await you and your family at this beautiful natural preserve.

In 1839, the Mexican government deeded 48,000 acres (land, it should be noted, already inhabited by centuries-old indigenous villages) to Antonio de Valle. Antonio’s son, Ygnacio, developed the land and turned it into a Californio Rancho. Sitting on the original mission trail – the El Camino Real – the ranch is believed to have inspired the 1884 Helen Hunt Jackson novel, Ramona, which is still in print today. Now visitors can experience a 40-acre landmark within the 1800s-era functioning ranch, and still get a glance of California’s colonial past.

*Due to Covid-19, some events may be canceled or rescheduled, and locales may be closed or have specific restrictions. Please call ahead to verify current conditions.