Of Wines and Ziplines

Of wines and ziplines

Soar over forests and vineyards with Margarita Adventures

If you’re like me, your bucket list is long, with some items being a little harder to reach than others. But head up to Santa Margarita, and you’ll discover a new one you’ll want to add and check off your own list right away: ziplining over vineyards. 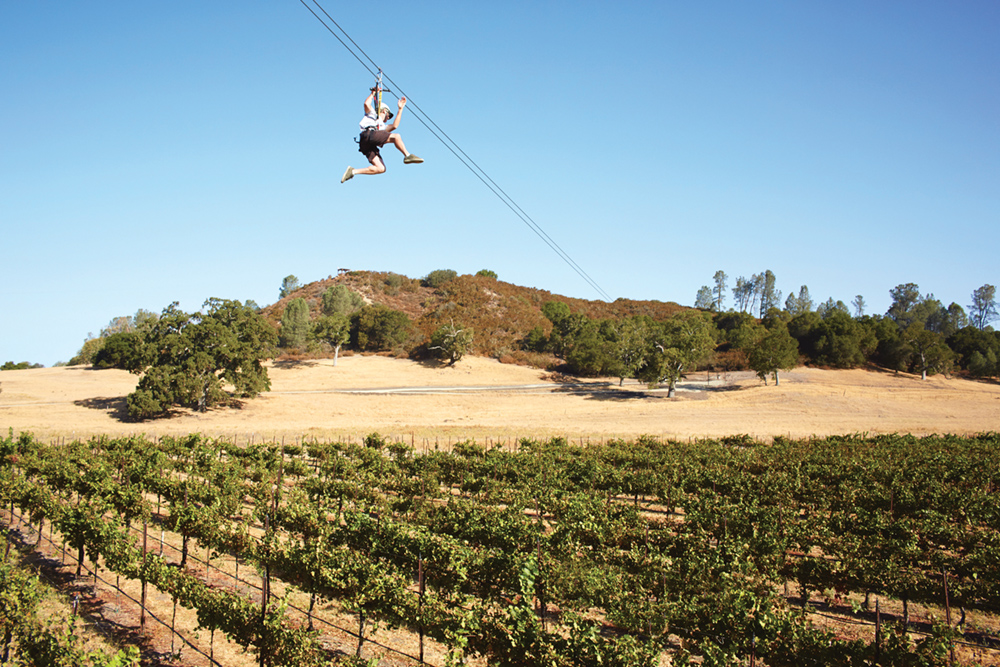 Photo by Chris Leschinsky Fly over the vines with Margarita Adventures.

Imagine a morning spent in the foothills of the Santa Lucia Mountains, making your way through oak forests and award-winning vineyards via six thrilling ziplines. That’s the one-of-a-kind experience you’ll find with Margarita Adventures.

Located on a working ranch, the zipline tour takes a little over two hours and includes chances to tour and learn about the region’s history and wildlife — as well as the day-to-day operation of the ranch and vineyards. The 14,000-acre Santa Margarita Ranch is operated by three local winegrowing and ranching families: the Wittstroms, Filipponis, and the Rossis. Doug Filipponi and Karl Wittstrom are longtime ranchers who oversee the cattle operation, Margarita Adventures, and Ancient Peaks Winery. 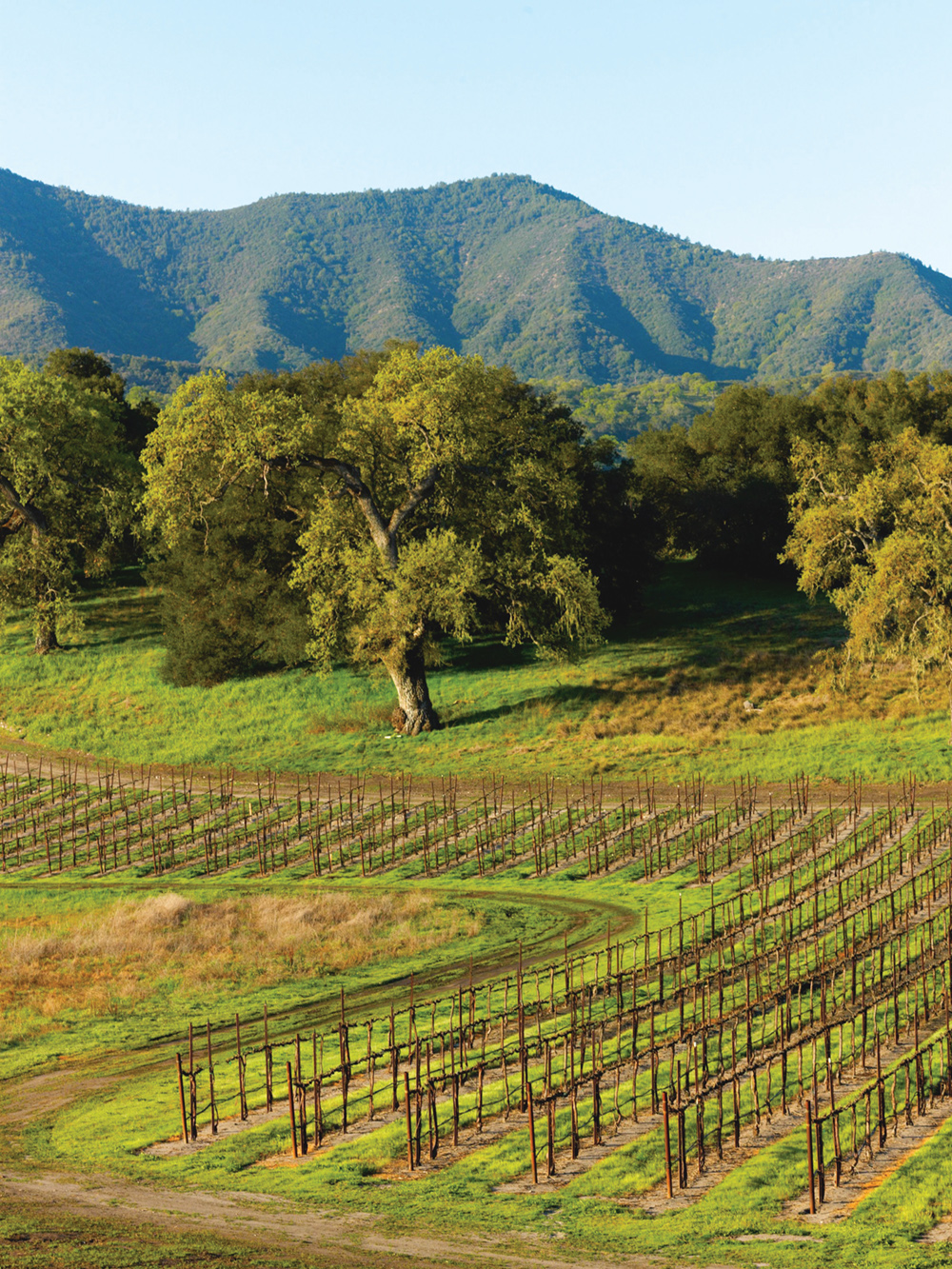 Photo courtesy of Mooncatcher Vines, forests, and mountains provide the perfect backdrop for a day on the lines.

“I am an outdoor person,” said Karl, who grew up in nearby Shandon. It’s not surprising, then, that he’s one of the masterminds behind Margarita Adventures. “My wife and I went to Costa Rica and we both ziplined, and I knew this could work on our ranch in Santa Margarita,” Karl continued. With 14,000 acres, there was room. As it happened, Karl’s nephew knew the perfect person who could build a zipline: Ian Adamson, the president of World OCR, the Fédération Internationale de Sports d’Obstacles.

Photo courtesy of Mooncatcher Visitors often tell owner Karl Wittstrom that ziplining is the closest thing to skydiving they’ll ever do — and it’s not hard to see why.

Together, Karl and Ian created a zipline tour that embraces their love of nature and adventure — with six ziplines that span more than 7,500 feet. Thanks to Ian’s expertise, the entire course is regulated by the Association for Challenge Course Technology (ACCT).

Margarita Adventures opened in 2011 and by word of mouth, the ziplining business took off. “I had no idea how many people would come in and enjoy ziplining. And people would say, ‘This is the closest to skydiving I will ever come!’” Karl said.

“This is the greatest thing I have done!” said Tyler Knott, previous operations manager. A native of Paso Robles, he worked for Rip Curl in L.A. for a decade before coming back home during the pandemic. Here, he found an excellent job that values the outdoors at Margarita Adventures. “My favorite thing I see on the ziplines from our customers is they are super nervous when they are just about to do the first line. It’s amazing to see their reaction after a few lines.” Tyler loves seeing their transition from nervousness to excitement. “We have more to offer more than any other ziplines. There is a tour of the land, a great history, and the abundant wildlife on the land.” 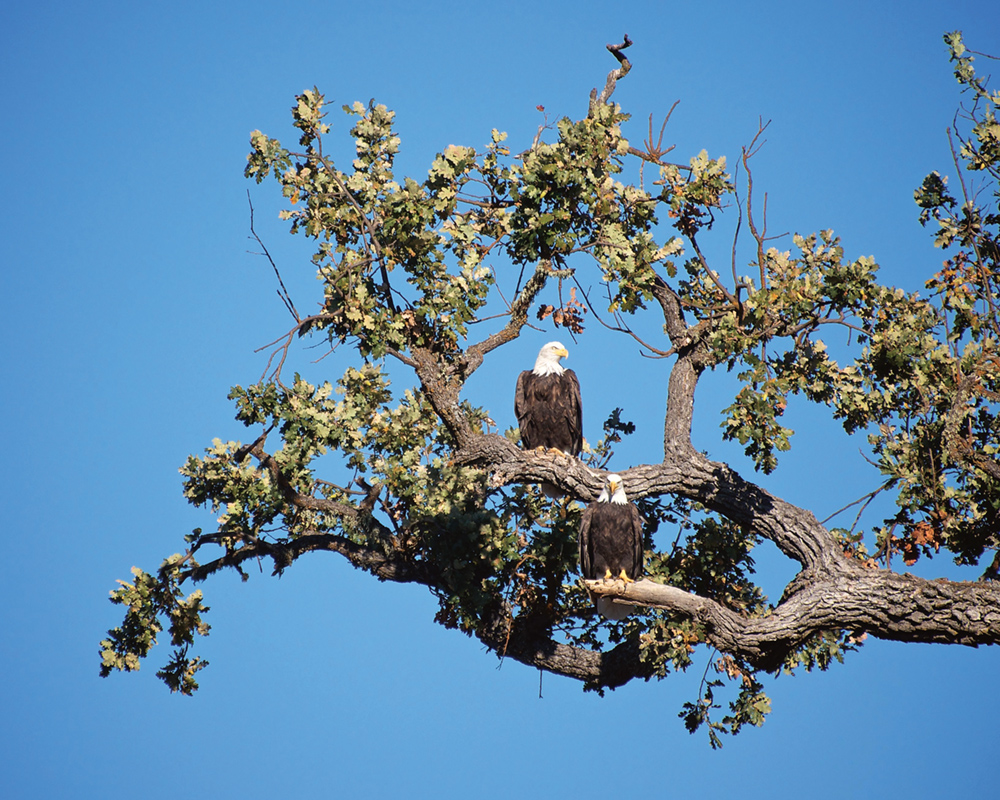 Photo courtesy of Mooncatcher In rural Santa Margarita, it’s not uncommon to see local wildlife like deer and bald eagles.

On the way to the zipline courses, the tour involves a guided discussion about the ranch and the vineyard. Not only is it rich with grapes, but also has an abundance of wildlife, such as bears, bobcats, wild boars, foxes, turkeys, and mountain lions. The area is also rich in history; Santa Margarita is one of the oldest cattle ranches in California, having been established and settled by missionaries in the late 1700s. Because of the abundance of water, grapes, and animal life, the town became an “asistencia” for two missions (San Miguel to the north, San Luis Obispo to the south). Two hundred years later, the famous Robert Mondavi family left a thumbprint of premier grapes grown in the region in 1999. The Mondavis set a sustainability trail on the ranch, and their progressive practices put Margarita Vineyard “at the vanguard of sustainable agriculture in the region if not the state,” according to the award-winning Ancient Peaks Winery. Zipliners will learn how those sustainability practices continue, in the form of water conservation, the utilization of solar power, and more. The ranch itself is part of the distinguished Harris Ranch Natural Beef Program and Partnership for Quality. 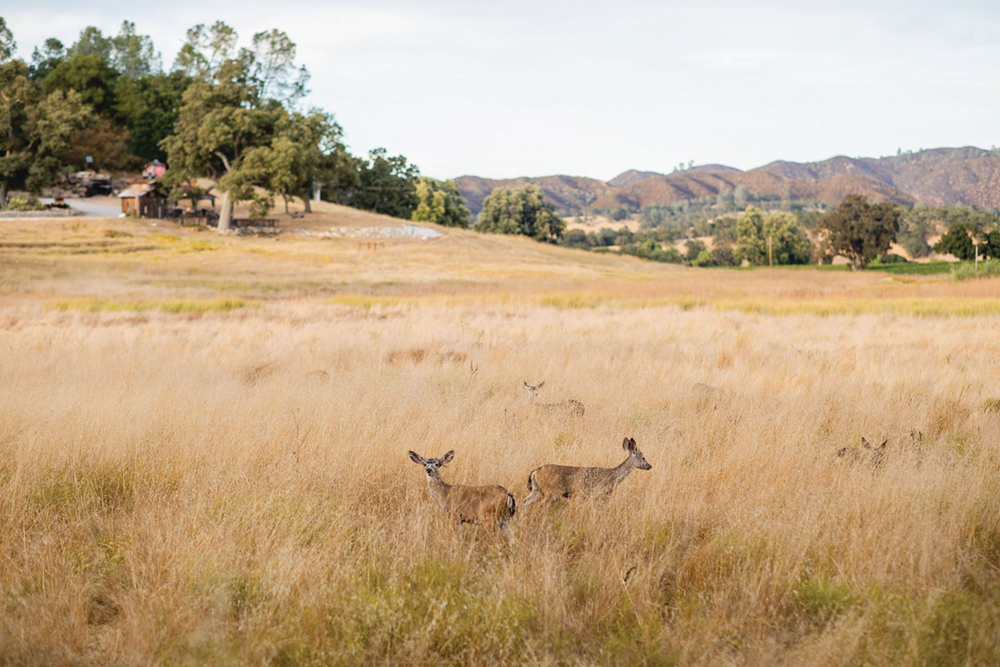 With that knowledge providing proper context for your adventure, you’re ready to zip! Each zipline is named, and the first one is the Double Barrel. Two lines run side-by-side, meaning you’ll have a friend zipping alongside you. It is considered one of the fastest ziplines in California today with a length of 2,800 feet and height of 160 feet. 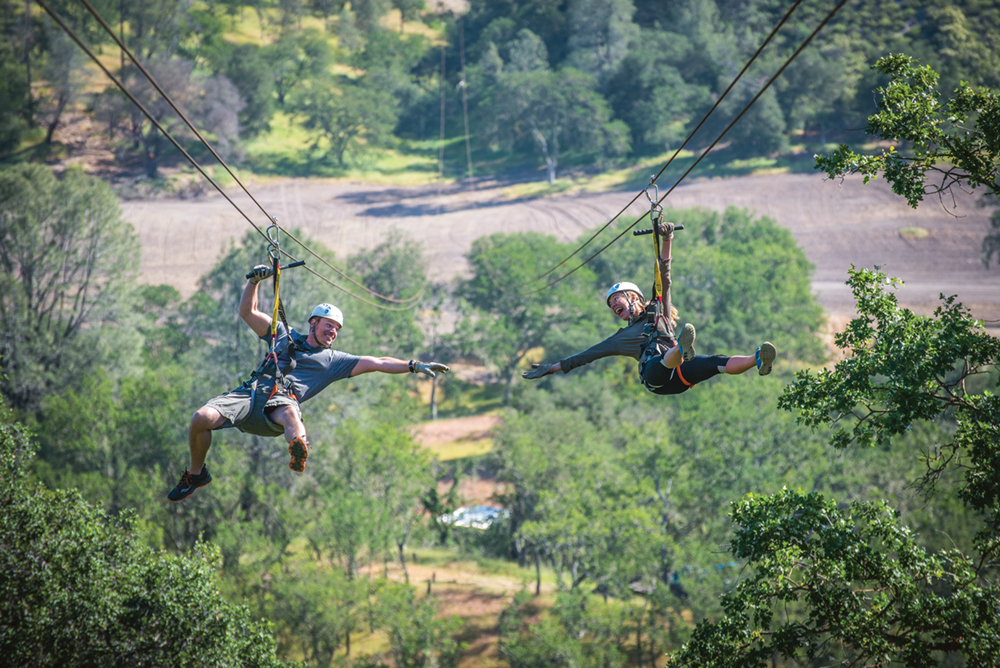 Up next comes a 300-foot suspension bridge between the first and second ziplines. The suspension bridge is the only one in California to be included on a zipline course. This will get your adrenaline going too. The footbridge was originally just a practical consideration, but it has become one of the best parts of the tour. 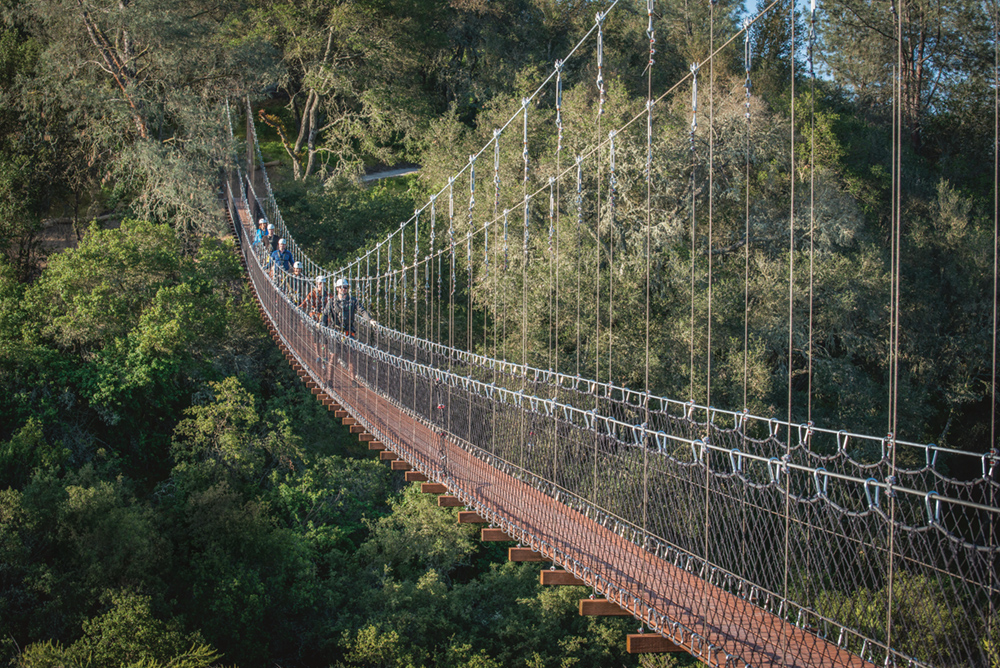 Photo by Matt Wallace The ziplines aren’t the only exciting thing at Margarita Adventures. The Suspension Bridge offers thrills of its own!

The next zipline is the Renegade. It is 1,300 feet long and goes over a valley dotted with oak trees, and mountains providing a bucolic backdrop. You’ll get so close to the trees that you can almost touch them on the next line, the Woodlander, which deposits you in the middle of a forest. The Hilltopper is up next, a short-and-fast slope that will give you a great rush.

The Archway zipline steps it up a notch, challenging your coordination with a bean bag. The goal is to toss the bean bag into a barrel while ziplining over it. Time it right, and a prize awaits you in the retail shop. 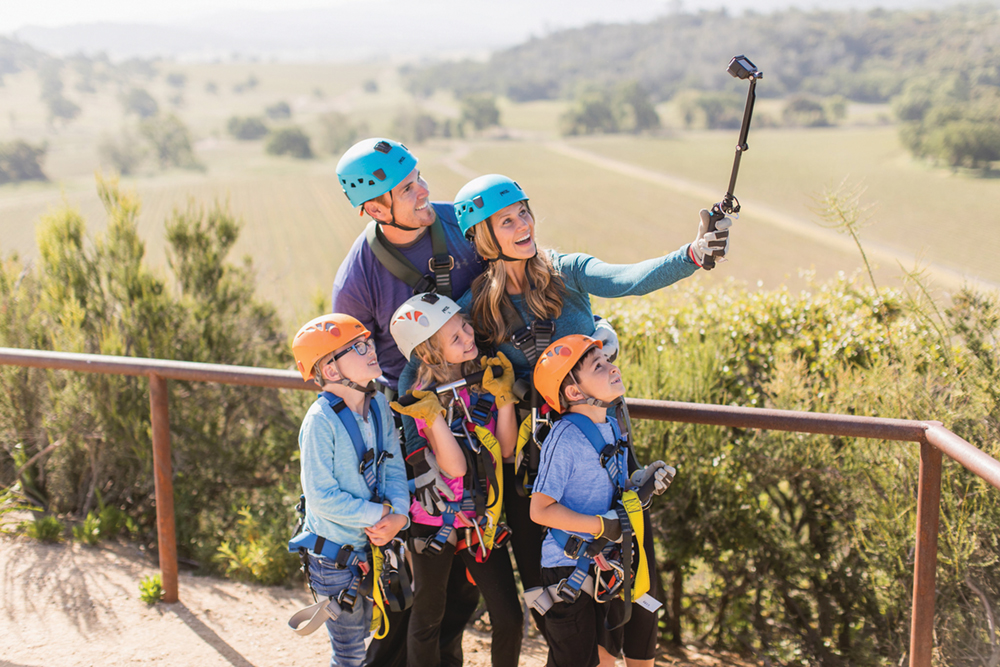 Photo by Cameron_Ingalls  What better way to make family memories than to catch some thrills together?

The last and the longest zipline is the Pinot Express. It travels over the Pinot Noir grapes and ends at a replica of an old California mining camp constructed by The Redwood Kings.

“People can do this and once they did it, I saw them come back again and again with new friends and family,” said Karl. “Sharing their experience was great to watch.” 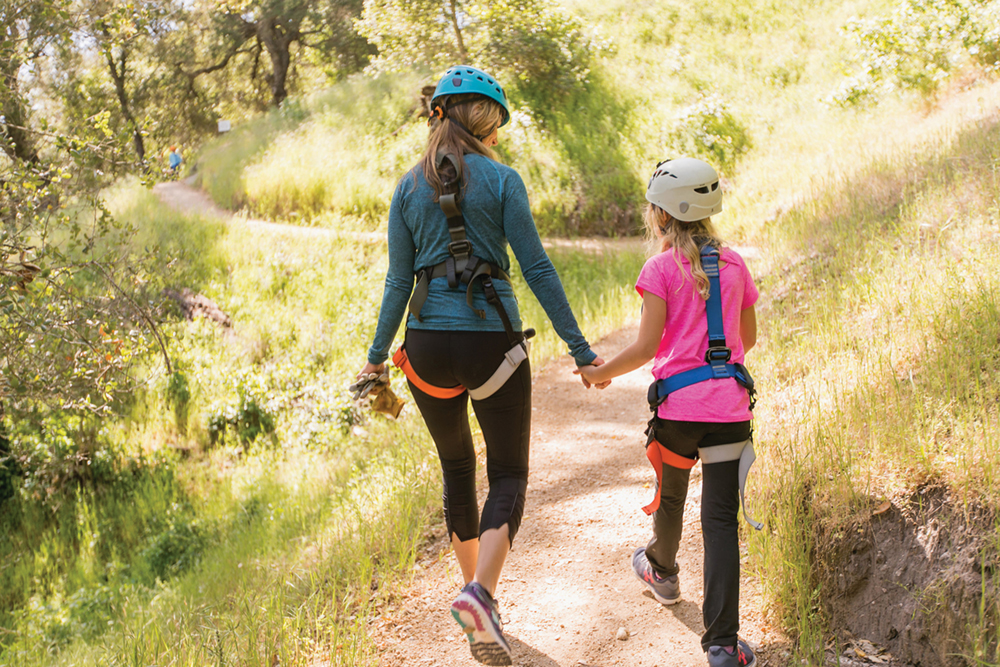 Photo courtesy of Mooncatcher Trails through oak forests connect one zipline to the next.

After ziplining, customers can book reservations at the Ancient Peaks Winery, located right across the street from Margarita Adventures. Select from a full menu and taste the award-winning wines — it’s a fantastic way to spend your afternoon, knowing that you are tasting the grapes that you just zipped over!

But the adventure doesn’t stop there. There are nature, wildlife, and kayaking tours also available.

Margarita Adventures adheres to strict safety guidelines for Covid-19. Although the images in this article show zipliners without masks, they are now required at all times for all visitors ages 2 and older. So, too, is social distancing, and smaller groups. All zipline stations and gear are sanitized between groups. Reservations required.