Where The Old West Meets The Modern

Los Olivos sits just two miles south of the 101 freeway along Highway 154 in the Santa Ynez Valley. The name — the olives in Spanish — comes from the 5,000 olive trees that were planted there some 150 years back. Today, the town of around 800 residents boasts about 20 wine tasting rooms, a cidery, a brew pub, upscale boutique shops, and high-caliber restaurants, all packed into just a few blocks. Many of the area’s businesses are still owned by local families, with no chain stores in sight. While strolling the streets lined with historic Victorian buildings, you can’t help but notice the wholesome downhome feel with its character and charm of Western yesteryear meets 21st century affluence. Thoroughbred horse ranches, wineries, and the property formerly known as Neverland Ranch stretch out along the rolling hills nearby. The likes of David Crosby, Kelly LeBrock, Ronald Reagan, Steven Seagal, Bo Derek, Robert Cray, and Cheryl Ladd all once called the area home.

In 1861, the San Francisco stagecoach and trains were the way to travel, and by 1887 with the addition of a train stop, the town began to take off. Mattei’s Tavern/Hotel sprang up to meet the needs of travelers at the terminus of the narrow-gauge train line that originated in San Luis Obispo. From here, the stagecoach could bring you further over the San Marcos Pass to Santa Barbara. The coastal route now known as the 101 wasn’t opened until much later. Historic Mattei’s is now under renovations to greet the 21st century, with a large upscale spa moving in. It is slated to re-open in early 2022. 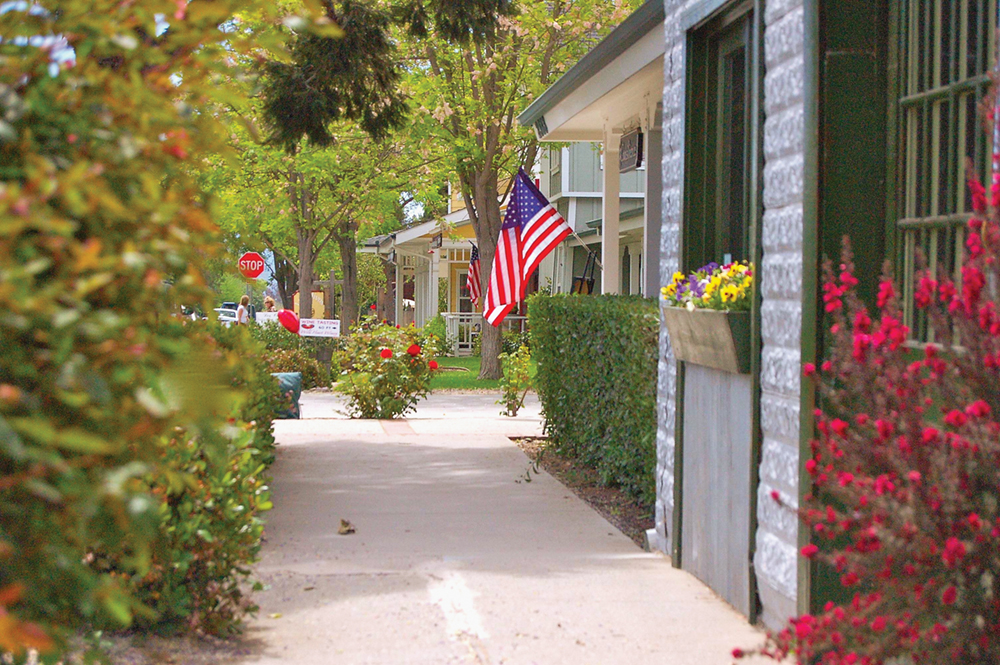 Photo by Bennett Barthelemy Downtown Los Olivos blends the old and the new, with the flag pole standing sentry at the heart of it all.

When I wandered the streets on a Monday afternoon there was still a bustle, the town alive with wine-sipping tourists and late lunch munchers. I stopped in and talked to Claire at the Corner Store and ordered some Santa Barbara-made ice cream. They also offer good local coffee for early birds. Claire grew up locally, so I asked for her opinion of food. For dinner she recommended the pasta at the Wine Merchant down the block. She admitted bias because she went to school with one of the family members that own it but raved that the gnocchi and ravioli were epic. My sister had said the same thing regarding their pasta, so I was convinced — and I didn’t even need to know that a scene from the classic movie Sideways which put Central Coast wines on the map, was filmed in there. 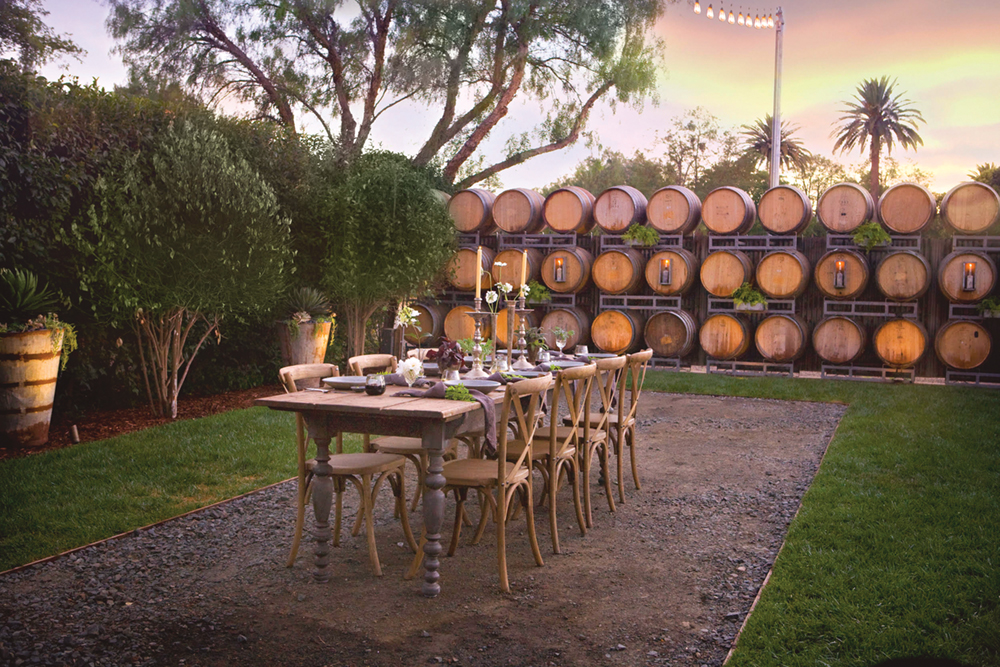 A couple blocks north, J. Woeste Home & Garden Treasures was a feast for the eyes, with a mind-boggling array of thousands of crafty yard and home furnishings neatly displayed throughout the property. I cruised back to the General Store built in 1903 (incidentally used as Goober’s garage in The Return to Mayberry film) where I found a nice journal. I sat outside in one of the many wooden Adirondacks to scribble and enjoy the sun setting across the main square. A flagpole rising from the intersection, erected in 1918 to honor WWI vets, thankfully stood at full mast (it drops to half when a resident of Los Olivos dies).

Events worthy of adding to your calendar happen here in Los Olivos including Day In the Country every October, bringing some 1200 people this year. It is celebrated with a small-town parade, NatureTrack 5k & Fun Run, 100 vendor booths, Figueroa Mountain Beer Garden, live music, food trucks, and Wine Roundup through town. The annual Olde Fashioned Christmas kicks off December with the lighting of the downtown flagpole. 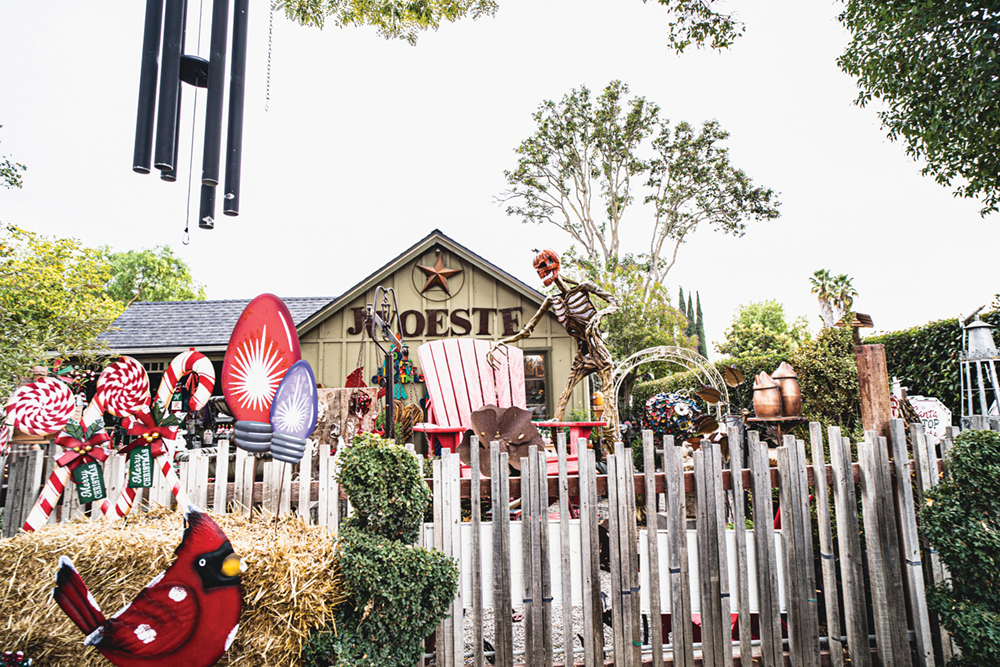 Photo by Bennett Barthelemy A treasure trove of gifts and decor, J. Woeste is a must-see in Los Olivos.

I left town down Highway 154, the old stagecoach route passing cattle ranches and wineries, with the setting sun splintering through the rows of eucalyptus and valley oaks. A pink glow settled on the peaks of the San Rafael Wilderness to the east. For my planned return, I will likely rent an electric bike from Pedego in town, to cruise out to the local wineries. With the appetite I’ll build up exploring the countryside, I’ll have a better opportunity to enjoy the local restaurants.

Though small in size, Los Olivos offers much more than can be explored in just one trip.

Learn more and start planning your own trip at losolivosca.com.