Cooking with fresh, local ingredients has its advantages. What, you ask, are the advantages? Glad you asked.

The money you spend on products from local farmers, growers, and ranchers, for example, stays in the community and is reinvested with other local businesses. Studies show that every dollar spent locally generates twice as much income for the community.

Fresh, local products such as unprocessed animal and plant foods are loaded with essential vitamins, minerals, fiber, and other nutrients that are essential for good health. A Big Mac® is quick (and two 100 percent all-beef patties sounds good, right?), but contains 540 calories with 240 of those calories coming from fat. It has 80 mg of cholesterol, which is high for one sandwich, and 46 grams of carbohydrates. Eating one of these sandwiches every once in a while is probably OK, unless you have severe health challenges. But a steady diet of processed and fast foods can’t be healthy.

Fresh is better, and my recipes below feature fresh ingredients. When you make my BBQ chicken pizza, navy bean soup, baked ravioli, or asparagus and Gruyère quiche recipes, I think you’ll find them to be healthy and nutritious — and tasty, too.

Before you sit down to dinner, consider a wee dram of whiskey or bourbon from one of the many distilleries in the San Luis Obispo, Santa Barbara, and Ventura County region. 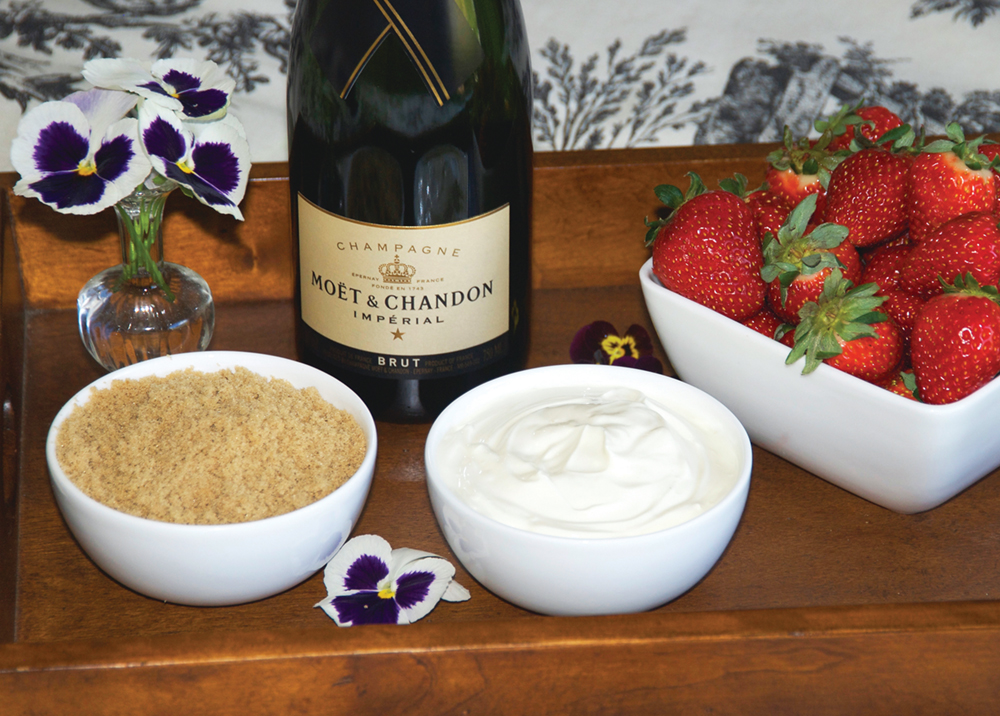 Before you even think about dinner, however, why not start the day with fresh strawberries for breakfast?

Directions: Twirl a strawberry in the brown sugar and then dip that in the sour cream. Feed it to your lover and offer a sip of sparkling wine. I like the Grenache Blanc de Noir from Santa Barbara’s Jamie Sloane Wines. If you like traditional champagne, try a bottle of my go-to bubbly, Moët and Chandon Imperial Brut Champagne. 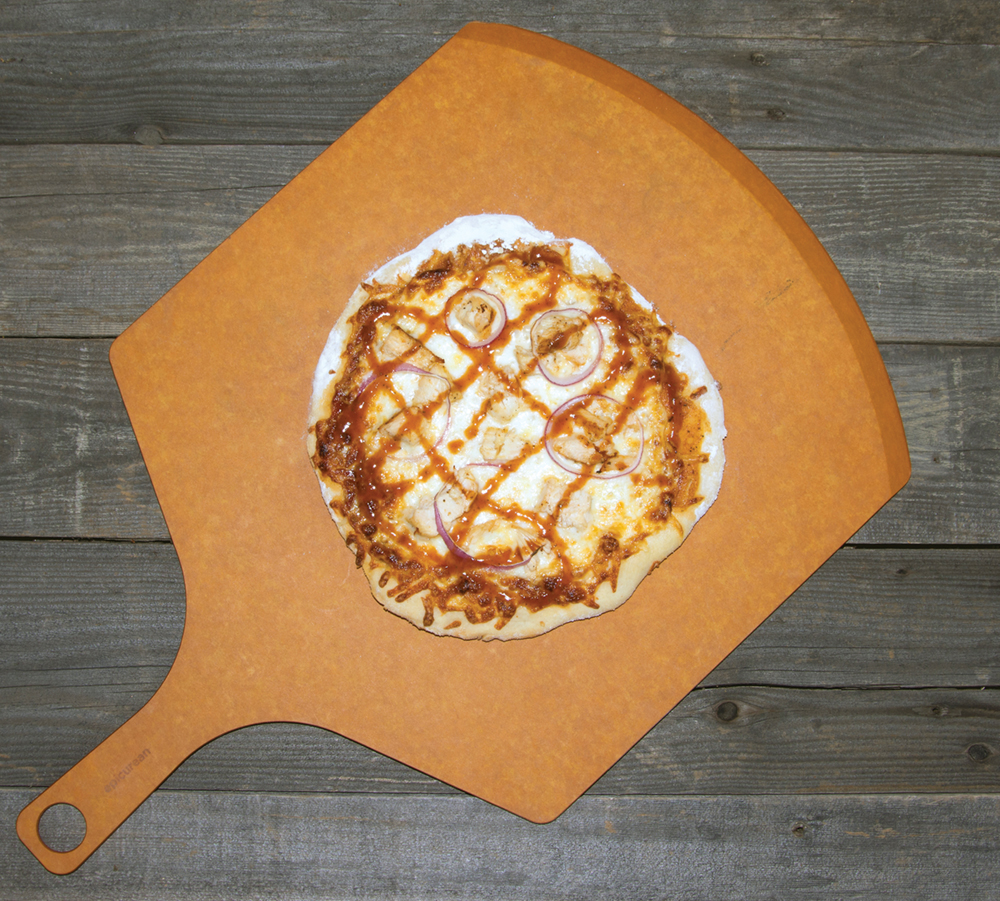 My omnivore wife, Robin, and I were eating at Marv’s Pizza in downtown Paso Robles this summer. Robin ordered their barbecued chicken pizza and, loving the pizza, asked if I could duplicate it for her at home. Always open to a food challenge, I assured her I could and that it would be even better because I would use my homemade barbecue sauce.

This pizza is baked in the oven, so if your barbecue is buttoned up for the winter, this is a perfect way to enjoy barbecue on a cold day without going outside. Pair with Chaparral, a light and dry ale, from the Ojai Valley Brewery, and enjoy!

Directions: Preheat oven to 425 degrees. Place a pizza stone or baking sheet in the middle rack of the oven to preheat.
Brush a large bowl with two teaspoons of olive oil. Shape the pizza dough into a ball, add it to the bowl and turn to coat with the oil. Cover tightly with plastic wrap and set aside in a warm place.

Put the chicken in a baking dish, season with salt and pepper, and brush with two tablespoons barbecue sauce. Bake on the middle oven rack until cooked through, about 20 to 25 minutes. Remove from oven, let cool, then cut into half-inch cubes.

While the chicken bakes, lay out a sheet of parchment paper and brush with one teaspoon olive oil. Transfer the ball of dough to the parchment and roll it out into a 10-inch round, stretching it with your hands as needed. Lightly brush the dough with another teaspoon of olive oil, cover with another piece of parchment, and set aside to let rise slightly, about 20 minutes.

Uncover the dough and spread with 1/3 cup barbecue sauce, leaving a 1-inch border. Top with Gouda, mozzarella, red onion, and chicken cubes. Slide the pizza (on the parchment paper) onto the hot pizza stone. Bake until the cheese melts and the crust is golden, about 12 to 15 minutes.

Remove from the oven and drizzle the remaining two tablespoons barbecue sauce over the pizza. Let pizza cool for a couple of minutes before serving. 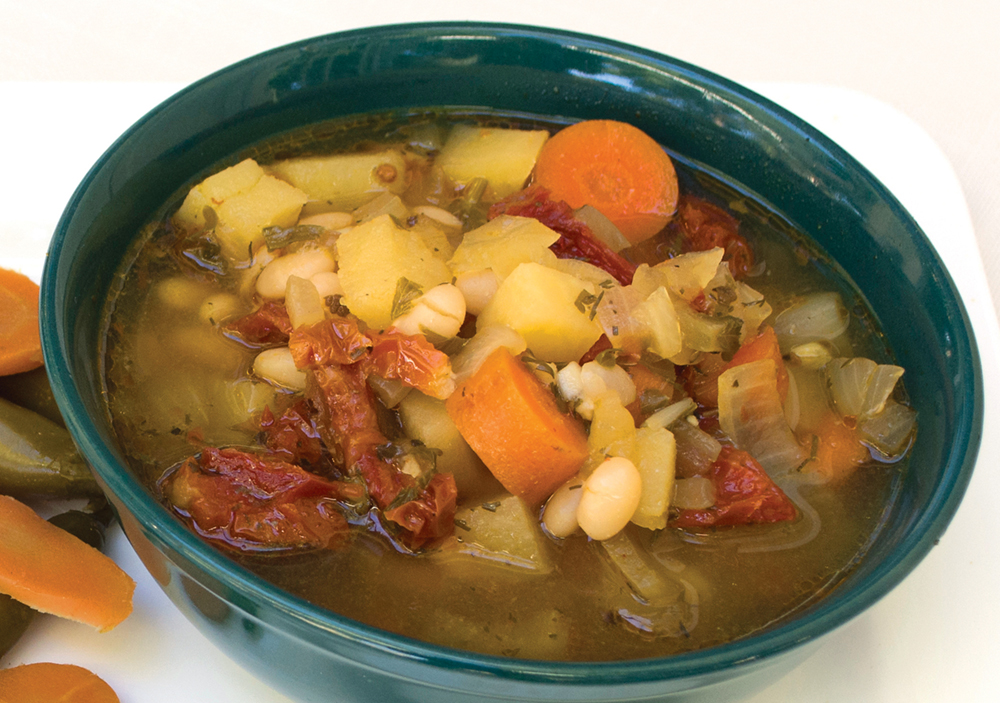 The navy bean got its current popular name because it was a staple food of the United States Navy in the early 20th century. They are mild, pea-sized beans that are creamy white in color.

Like other common beans, navy beans are one of 13,000 species of the family of legumes, or plants that produce edible pods. When combined with whole grains such as rice, navy beans provide virtually fat-free high-quality protein. Pair your meal with Carpinteria’s Rincon

Brewery Dos Arboles Pilsner beer or with a bottle of the 2016 Grenache from the Brick Barn Wine Estate in Santa Ynez.

Directions: Plug in your slow cooker and set to low heat. Slice the sausages into ¼-inch slices and fry until browned on both sides. Place the cooked sausages and all other ingredients in a slow cooker, and cook for five hours. Before serving, adjust for salt, adding more if necessary. 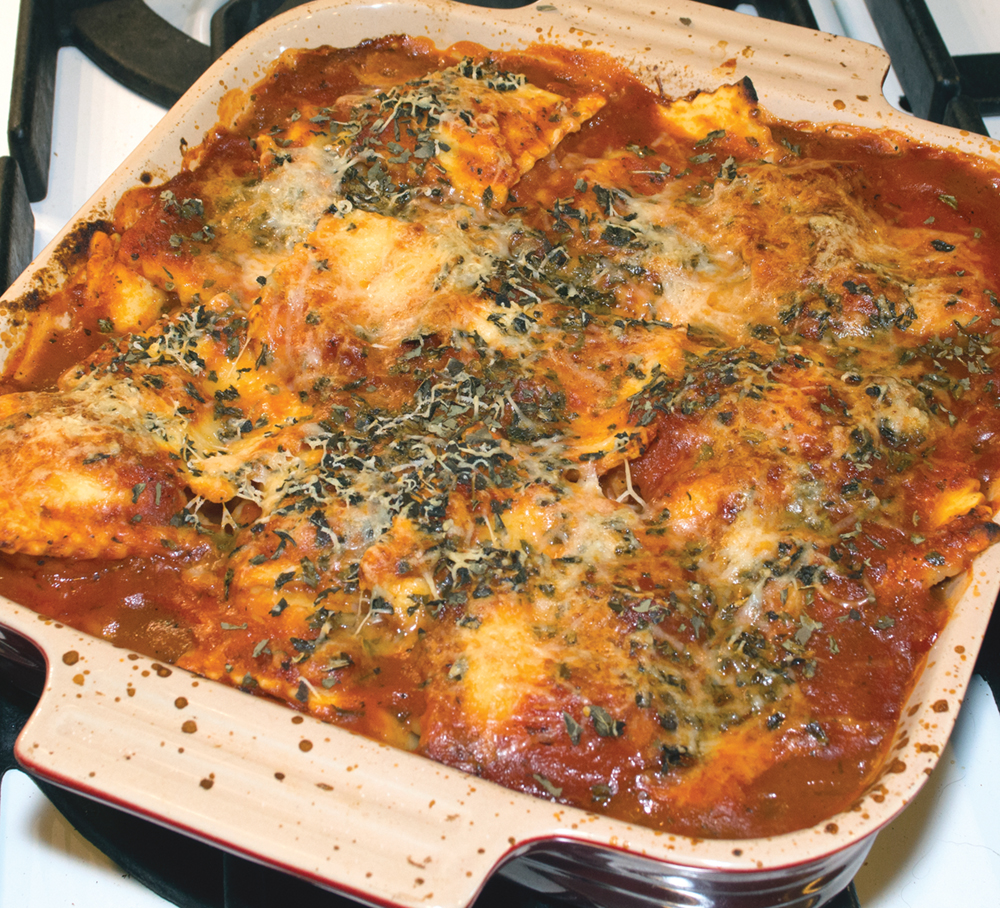 This recipe was inspired by memories of eating fried ravioli in the mid-1980s. I was consulting, on weekends, for a couple of older Irish gentlemen whose names shall be changed to protect the dearly departed. I’ll call them Jim and Graham. For the nine months I worked with them, I was invited to meet on Saturdays for drinks and fried ravioli at the Club Pheasant Restaurant in West Sacramento.

My Irish friends had a reserved table at the Club Pheasant Restaurant, and I would meet them in the early afternoon. After a few Saturdays, I would walk into the restaurant, and the hostess would say, “Hi Randy. Your mentors await. Shall I get you the usual?”

“The usual” was Bombay gin over, with a twist. It wasn’t my usual. I had never tried gin until I met Jim and Graham. But it was their usual, and I grew to enjoy having this pre-lunch cocktail (or two) with my friends while listening to stories of their mischievous boyhood pursuits.

Just as we finished sipping our gin, plates of fried ravioli would magically appear. No one ordered them. They just appeared. There were two plates of fried meat ravioli for Jim and Graham and a plate  of cheese ravioli for me. My plate included marinara dipping sauce.  Graham would tease me about the ravioli saying, “I think the cook got our orders mixed up this time. Be careful you don’t bite into any meat.”

Those were fun times. When I was 35 and still invincible, the fried ravioli was a terrific weekend treat. Today I try to stay away from fried foods, but will once in a while make this healthier version for Robin and me. Pair with your favorite Chianti, or try a semi-dry 2015 Reserve Jeunesse Red Wine Blend from Oxnard’s Herzog Wine Cellars.

Directions: Preheat oven to 425 degrees. Heat olive oil in a large saucepan over medium heat. Add onion and garlic, and season with salt and pepper; cook, occasionally stirring, until softened, about five minutes. Add oregano, basil, sugar, and tomatoes. Bring to a boil, reduce heat to simmer. Break up tomatoes with a spoon and simmer for 20 minutes or until sauce is thickened and reduced.

While the sauce is simmering, cook the ravioli in a large pot of boiling water not according to package directions but just until they float to the top (pasta will continue to cook in the oven). Drain pasta and return to pot.

Add sauce to the pot and gently toss pasta with sauce. Pour pasta into a 9-by-13-inch baking dish and sprinkle with cheeses. Bake for 20 minutes or until golden. Remove from the oven and let cool for five minutes. Serve with a fresh garden salad and breadsticks. 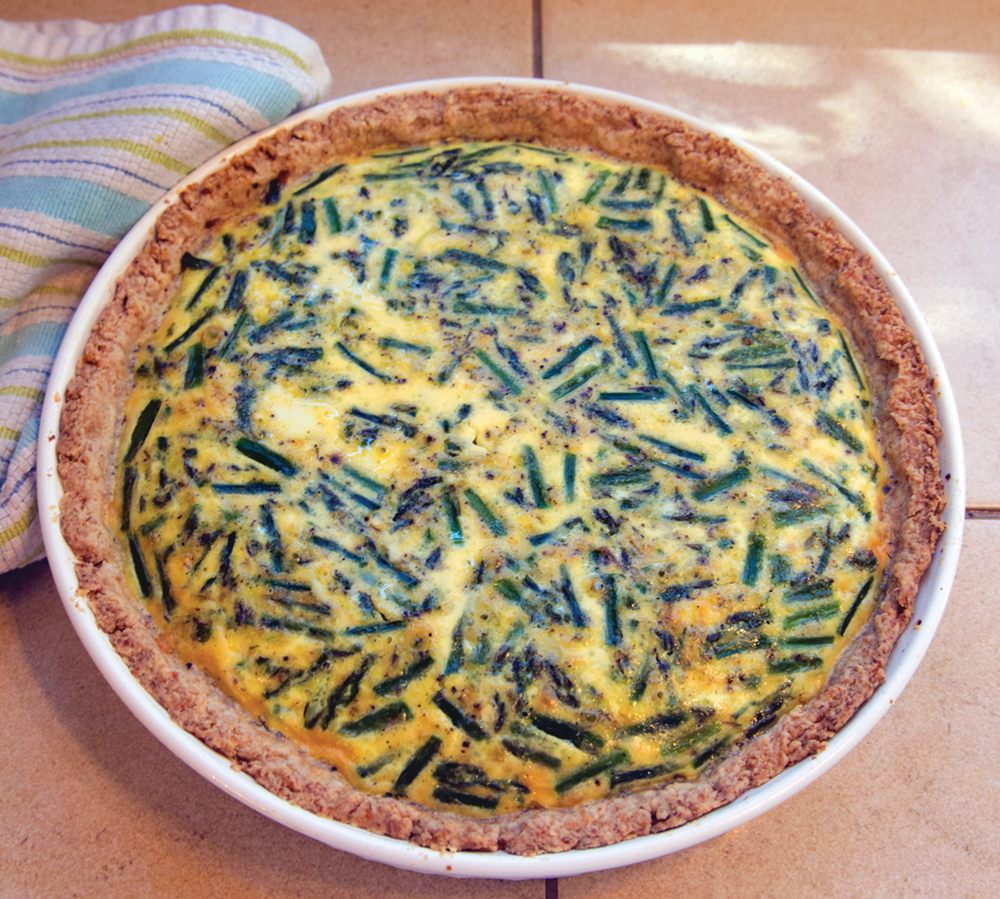 Are you looking for something new for a family get-together? Look no further. This quiche has body and, just as important, a fantastic combination of flavors that complement almost anything you serve for dinner.

Gruyère is a hard yellow cheese named after the town of Gruyères in Switzerland. It is sweet but slightly salty, with a flavor that varies widely with age. It is often described as creamy and nutty when young, becoming with age more assertive, earthy, and complex. This recipe takes advantage of aging. The flavor and texture of my whole wheat crust adds yet another dimension of flavor that will make you yodel with delight.

I like to serve this with a classic Caesar salad and a bottle of Albariño wine (Tangent label) from the Niven Family Winery in San Luis Obispo.

Crust Directions: Stir together flour, wheat germ, and salt. Cut butter into these dry ingredients (a pastry cutter makes this easy). When the dough is the consistency of rolled oats, sprinkle with enough of the water to hold the dough together. Form into a ball, cover, and refrigerate for about an hour while you prepare the filling.

Filling Directions: In a large skillet, melt butter over medium heat. Add leek and asparagus; season with salt and pepper. Cook, occasionally stirring, until asparagus is tender — about seven or eight minutes. Set aside to cool. In a medium bowl, whisk together eggs, half-and-half, salt, pepper, and nutmeg. Set aside.

Baking Instructions: Preheat oven to 350 degrees. Spray a baking dish with cooking spray. Roll out dough and lay carefully in the baking dish creating a 1½-inch high crust up the sides of the pan. Sprinkle Gruyère on the bottom of the crust and top with asparagus/leek mixture. Pour egg mixture on top. Bake until the center of the quiche is set – about 50 minutes. Remove from oven and allow to cool for 10 minutes before serving.

Randy Graham has been a vegetarian since August 1975. He eats local and organic grain, fresh fruit, and vegetables as much as possible. He enjoys cooking for friends and family using ingredients from his backyard vegetable and herb gardens. He teaches at the Ojai Culinary School, and his Chef Randy column can be found in various Central Coast newspapers. He has written and published six cookbooks and is working on a seventh, the Ojai Valley Instant Pot cookbook.

See his recipes and cookbooks at valley-vegetarian.com.