Growing up in the gritty steel city of Birmingham, England, I loved the song, Ventura Highway. Full of the impossible dream that was California, and sung by a band named America. Although the lyrics of their song, A Horse With No Name more accurately represented my circumstance, well, this boy was allowed to dangle an impossible dream at the end of another grim day, right? Fast forward to 1987 and I found myself living in, you guessed it, Ventura. I rode on that famed Highway 101 every day and eventually moved up to Ojai. That’s where I met and became friends with keyboardist and saxophonist Jimmy Calire, who toured with, you probably didn’t guess this, America, for more years than you can shake a stick at. Funny how life often does what you make it do. All these years later, I have found myself immersed in the music scene for the past 15 years and now writing about three profoundly different music venues in, yep, you definitely guessed this one too, Ventura.

Ventura is chock full of music and is often called the Nashville of the West Coast.  Due to its interesting mix of yuppie and redneck inhabitants, its less flattering moniker is Ventucky  (also the name of an album by the supremely talented Dan Grimm). Fortunately, all inhabit the place in peace!

So, here we go. These are the places that you would not normally be drawn to while passing through Ventura’s blue highways. But, if you fancy a bit of local color, a bit of fun, and a heap of quality, read on and give them a visit. 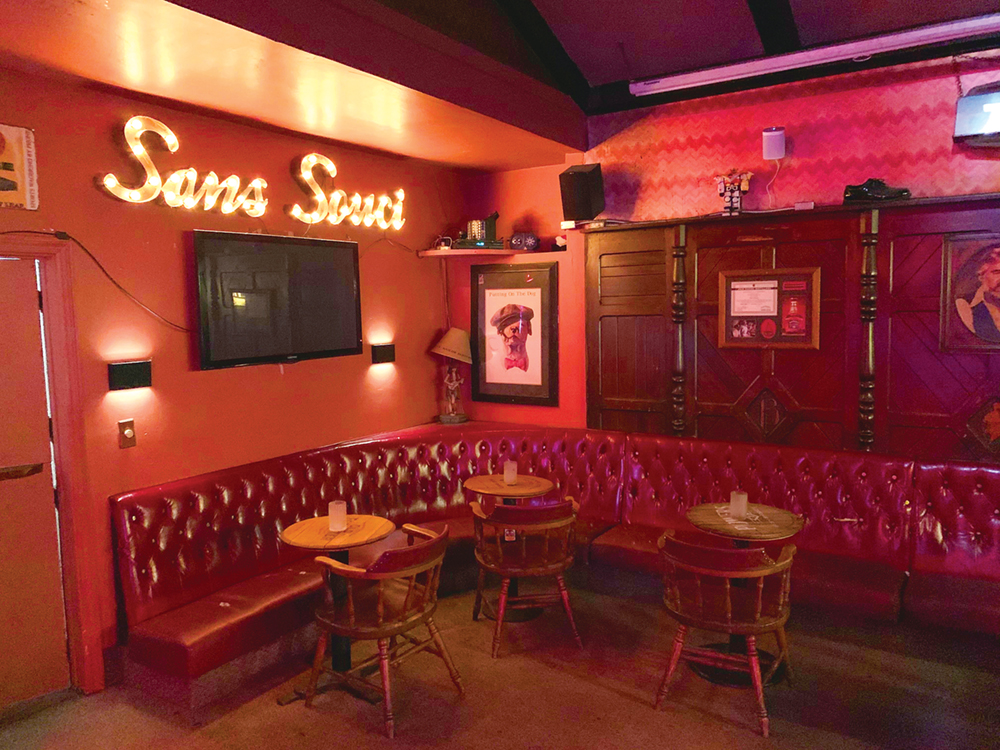 Sans Souci aka The Sewer.

First on the list has to be the  Sans Souci, also known as The Sewer to anyone from around the area. Tiny, dark, and not the tidiest place you’ll ever visit in the world, you will immediately wonder why you are walking into what appears to be your imminent demise. Hidden away at 215 S Chestnut St, directly across from the historic Ventura Theater, this place was last on the market 20 years ago although it has been around for forever. Given its size, one has to wonder how it survives. However, to go there on any given night is to understand. It is always busy and it is always full of locals. Make no mistake, this is a dive bar in every sense of the term. A place where the bartenders move fast, the drinks are strong, and the music is loud. The bands here tend to be rock to metal and can be found on most weekends. Regardless whether the type of music on offer is to one’s personal taste, the aggressive music fits the environment to a T. This is accentuated by the fact that the bands usually set up for their late sets on the far side of the tiny inside bar leaving barely enough breathing space to order your gin and tonic. Don’t be fooled by the environment, though. These are some of the best bartenders in town, and they will hear your fancy drink order and  make you a believer in Ventura’s classic dive bar.

Turning left out of The Sewer, left again on Main Street, walking down the gentle hill for a couple hundred yards and crossing the road, you will be standing in front of The Star Lounge. 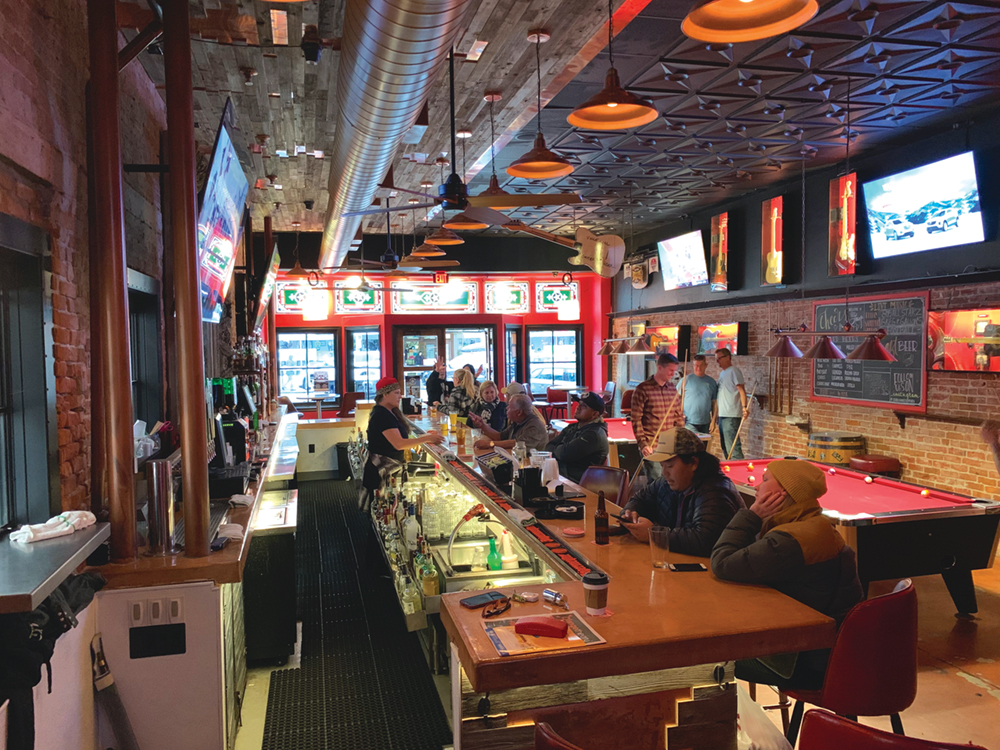 Goodness gracious me! If ever there was a bar that was an institution in Ventura, it is this place. This is old-style Ventura in the flesh. Ventura used to be a big oil town and this was the place where those hardened men drank, swore, fought, and took aim at the spittoons. The Star Lounge has mellowed somewhat but it still holds true to its traditional roots, even after local Mark Hartley bought it a decade ago. Mark completely renovated the space while retaining its real purpose: booze, pool, and music. The thing is though, Mark happens to be one of the biggest country music managers in the world, so he has done things properly. In went a nice stage, in went a nice backdrop, in went a great sound system, and all tied together very nicely with great stage lighting. The red walls, which hold five massive TVs (all on sports) match the red felt that tightly covers the two pool tables.

When I rolled in on a Friday night, the Star Lounge was doing what it does. The joint was busy with a culturally diverse and eclectic mix of locals young and … older, hippies, rednecks, blue collar working folk, and beautifully coiffured and dressed yuppies. There was an awesome cover band by the name of Reign on stage (it’s always cover bands here) playing ‘70s and ‘80s anthem rock incredibly well. Not to be missed is something else that Mark gifted this bar. Without being ostentatious or drawing attention to themselves, the walls are adorned with signed guitars of incredibly famous musicians, mostly, but not exclusively, from the country genre. As you walk in, glance to your right, and you will see the first of many: Vince Gill’s axe. The Star Lounge does what it does, and makes no apologies. It is a fabulous music venue for the type of music we all know, love, and need. And, boy, does the Star Lounge scratch that itch! 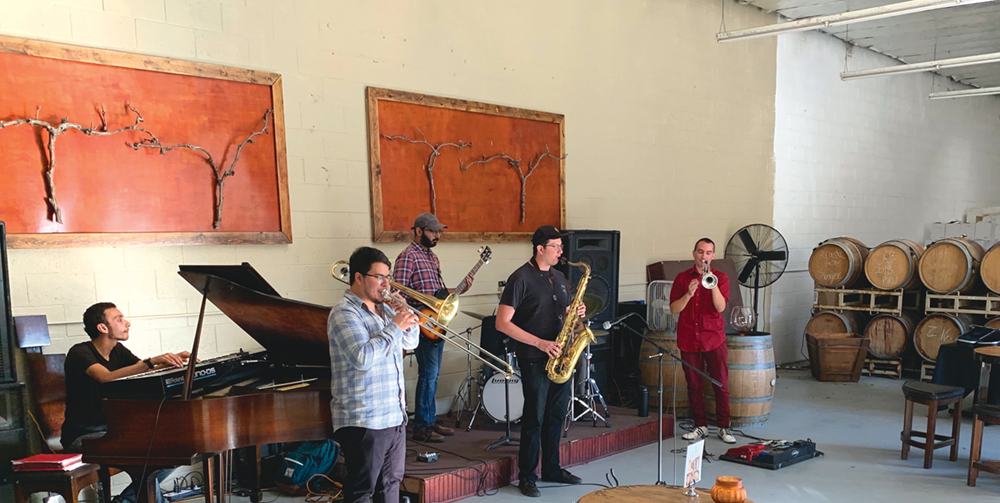 And now, for something completely different. Squashed Grapes located on Market St, is commanded by possibly the two most determined men in the business and driven by  a simple goal: Play Music, Love  Jazz, Make Wine.

Owners Adam Randall and Josh McNutt have had a challenging journey over the past few years. The original Squashed Grapes was located in mid-town Ventura, not exactly known as a hot-bed of anything let alone wine drinkers and jazz aficionados. However, they provided a fantastic environment for musicians with a “build it and they will come” type of model and, indeed, they did! Anyone who was anyone in the music world trooped down and played there. It was a beautiful scene, even if jazz wasn’t necessarily  your bag. And, given that neither was wealthy, for Adam and Josh it was all a labor of love.

Circumstances arose that led them to vacate their original space, but that wasn’t going got stop this dynamic duo. They came up with a plan to push forward with two places: One ostensibly for the making of wine and wine tasting, and the other as a new and improved jazz club. They saved their pennies, found locations, and went along to the City to sort out their permits. It was there, at the counter of the faceless bureaucracy, with signed leases in hand, that things began to go horribly wrong. The permitting process threw roadblock after roadblock in their way, and as a result, two years later, only one of their places is currently open.

Throughout this mind-numbing process, the boys have barely missed a step. While waiting on the final permits for the winery space, they teamed up with another local restaurant to take over the front of the house and not only present jazz, but to raise money for charities. These guys are determined! Just recently, the Squashed Grapes winery slung open its garage-style doors to reveal an expansive wine tasting room filled with maturing barrels of their own wine. I showed up on a Saturday afternoon at about 3 pm to be greeted by the incredible sounds of the five-piece Dogfish jazz band. The space that Squashed Grapes has cut out for the bands that play there is remarkable. The bands and musicians are not deemed to be “help” — they are viewed (and treated) as an integral part of the business. Adam shared with me that he views music, and jazz in particular, as an intrinsic part of his soul, and that he is irresistibly driven to provide the best that he can for the musicians. That would probably explain the exquisitely tuned grand piano available for the bands and the excellent sound system. After all, what is jazz without a piano! Once again, while still awaiting an end to the permitting nightmare for the second part of their project, Squashed Grapes is attracting the support of all of the musicians that they’ve supported over  the years.

Not too many years ago when I first started bumping around the downtown area of Ventura, it was a music desert. It has now become a beautifully vibrant beachfront music property. To take the lyrics from another of America’s hits, “I never believed in things I couldn’t see, I said if I can’t feel it then how could it be?” The owners of all three of these fabulous places noted here have proven that you don’t have to see things to believe that they exist because if you feel them, then You Can Do Magic — just as America said you could.