This is the time of year when we celebrate, when we feast and give thanks for one another around the dinner table.

But what if your table, and everything around it, was suddenly gone? What if you had to leave your home with only the clothes on your back, fleeing Santa Ana-driven flames that would eventually consume your entire home, your entire neighborhood?

Upper Ojai residents know all too well what that’s like. Almost a year after the Thomas Fire destroyed 25 percent of the homes in their community, they’re still processing their grief (and mountains of paperwork) as they try to put their lives back together. 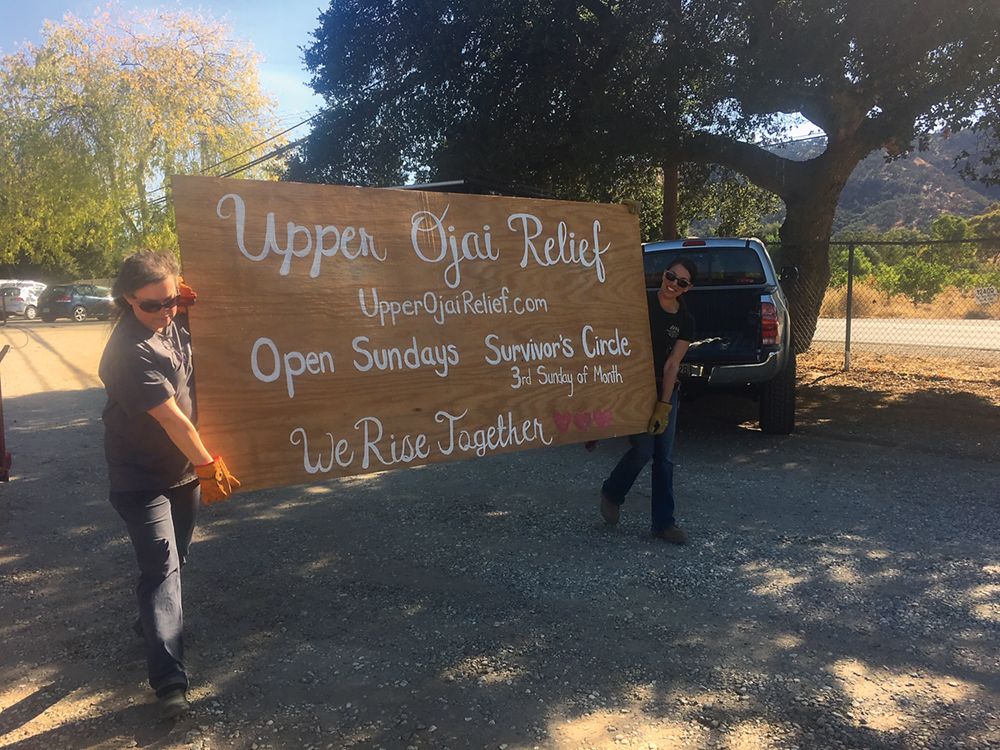 A sign of the times: Upper Ojai residents are still dealing with the aftermath of the Thomas Fire — but, as their sign says, they’ll do it together. Survivors are welcome at the old Summit Elementary School for once-a-month gatherings as they continue to pick up the pieces.

And yet it was these very folks who jumped into action earlier this month, as the Hill and Woolsey Fires raged through eastern Ventura County and into Los Angeles County.

Within hours, members of the Upper Ojai Relief nonprofit group were on Facebook sharing detailed lists of items victims would need, and organizing volunteers and donation drop-off points. Others, like Trevor Quirk and Justin Homze, headed directly toward the flames with shovels and chainsaws to help cut fire breaks around homes. Still others hooked up their horse trailers and went in to help evacuate livestock. 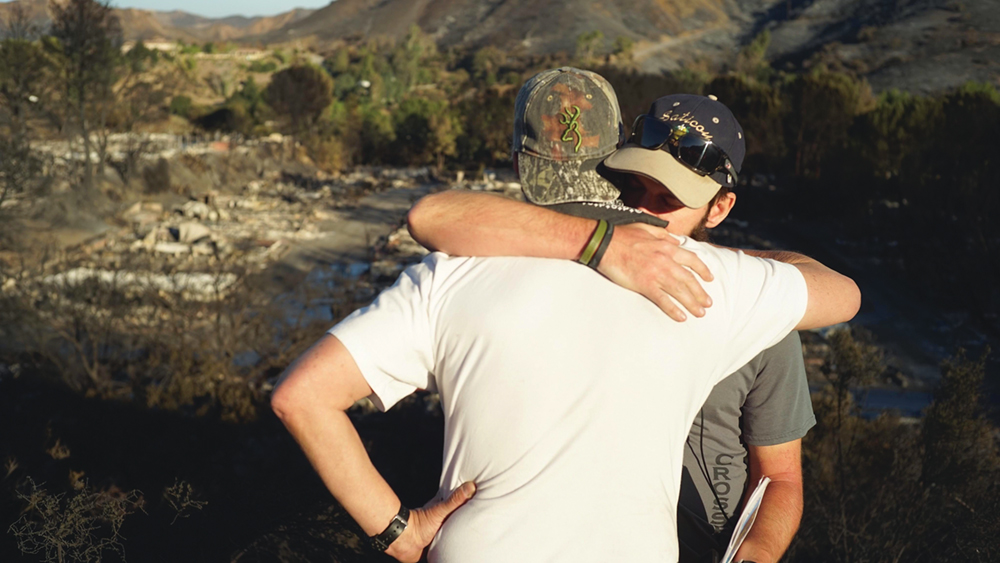 Sometimes, all you can do is share a hug.

“We understand the fear, uncertainty, and sadness that our neighbors are experiencing,” read a post on the Upper Ojai Relief Facebook page. “We are ready to help!”

In the days that followed, donations began pouring in from Ojai Valley folks — both those who had lost their homes and those who nearly did. Local Air BnB owners offered their properties for free. Travis Escalante offered his Newbury Park store parking lot as the main donation center. Homze, Quirk, and others got together to feed and water people’s pets that’d been left behind during mandatory evacuations. Tristan Thames and Keoki Woodhams made dozens of sifters for fire victims to go through the ashes and recover belongings. Ojai Valley School — which lost buildings in the Thomas Fire — is donating half of the proceeds from its Giving Tuesday fundraiser to these latest fire victims.

I’ve said it before, but it’s worth saying over and over again: Who wouldn’t want to live amongst such loving, generous people? As Quirk is fond of hashtagging in Facebook posts, #LoveSpreadsFasterThanFire, and #WeRiseTogether.

For folks like Jessica Colborn, helping Woolsey Fire victims “just absolutely made so much sense, to be able to walk people through this in whatever way possible.” Colborn’s parents lost their Upper Ojai home in what was then the largest wildfire in state history. “During that first week or so afterwards … it was bewilderment, uncertainty, just kind of, where do you start? Where do you go? There is just so much.” 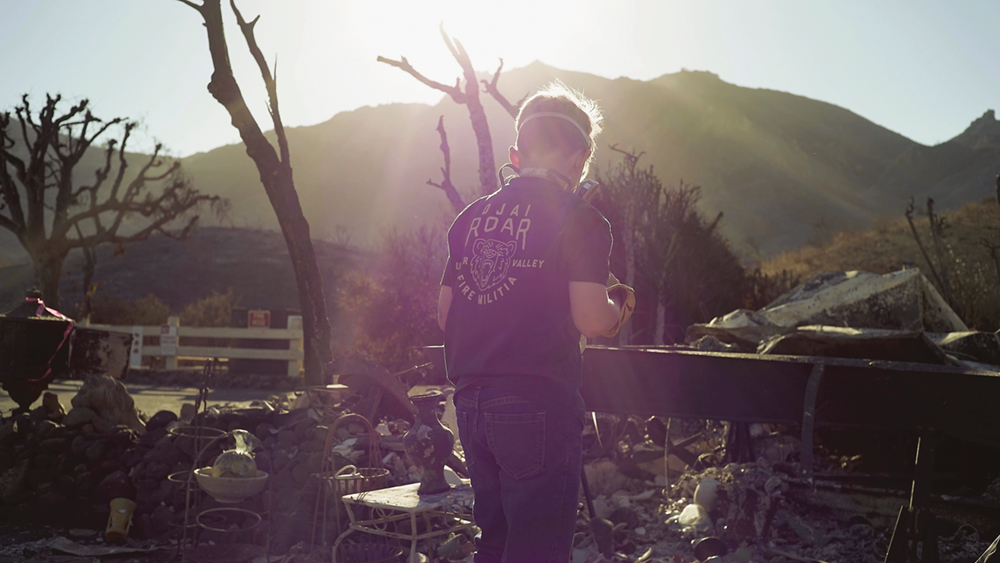 Colborn described herself as a behind-the-scenes volunteer of Upper Ojai Relief, the one answering emails, coordinating donations, organizing volunteers, and compiling lists upon lists. Quirk and Homze are largely the front men of the group, on the front lines of the disaster area, leading the charge and finding folks who need help.

Both Colborn and Quirk spoke to the emotional devastation people feel with the loss of a home. “Your sense of security and safety is gone,” Colborn said.

“Your home is supposed to be where you feel safe, your little nest,” Quirk said. “It’s a very unnatural feeling to not be able to go home and feel safe and warm, to cuddle up in a blanket.”

So having someone — or, in this case, several someones — to look out for you and guide you through picking up the pieces of your life is invaluable.

Quirk was among the fortunate Upper Ojai residents whose home was spared in the Thomas Fire, but the devastation he saw all around spurred him into action. Just like during the Thomas Fire, he and Homze are using Facebook to spread the word about specific needs and to quickly get people help. 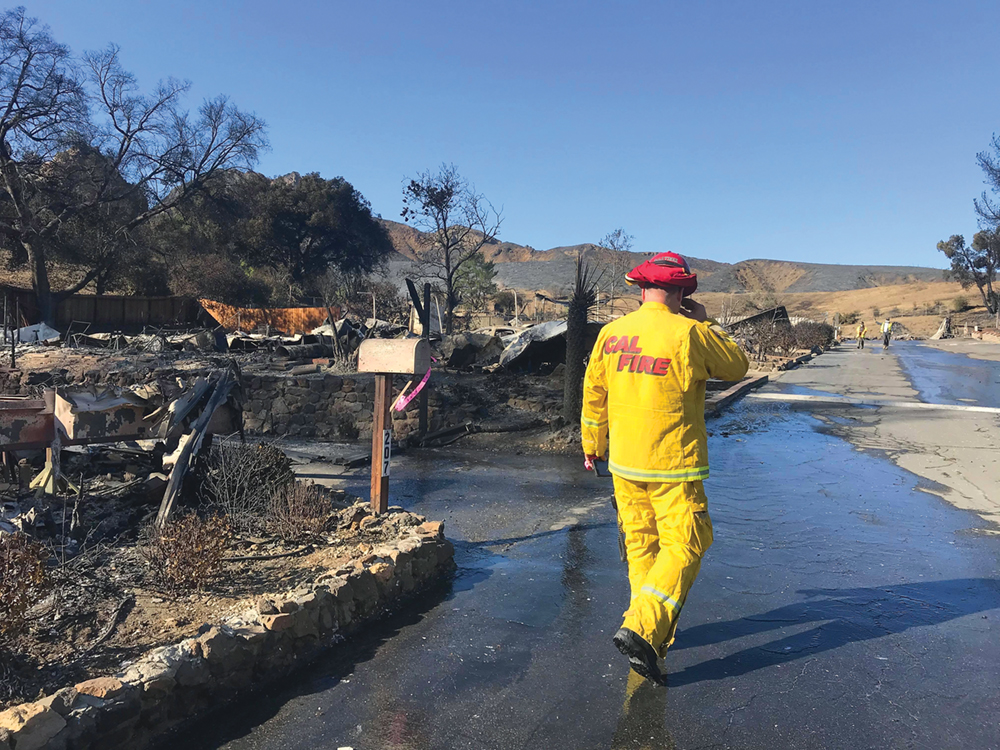 It’s working. Gift cards, diapers, temporary shelter, sifters, special masks — Ojai Valley residents have stepped up, just as they did almost a year ago. A family of 3, an elderly woman living alone, a middle-aged couple … locals have answered the call to help. “I met with a family with three kids,” Quirk said. The father “left with only the clothes he was wearing, and he’s been wearing them for the last three days.” A Facebook post helped get them set up with some basics.

“That’s been our thing, showing family, friends, and neighbors what we’re doing, and they think, ‘that’s something I can do, that doesn’t seem so hard,’” said Thames. 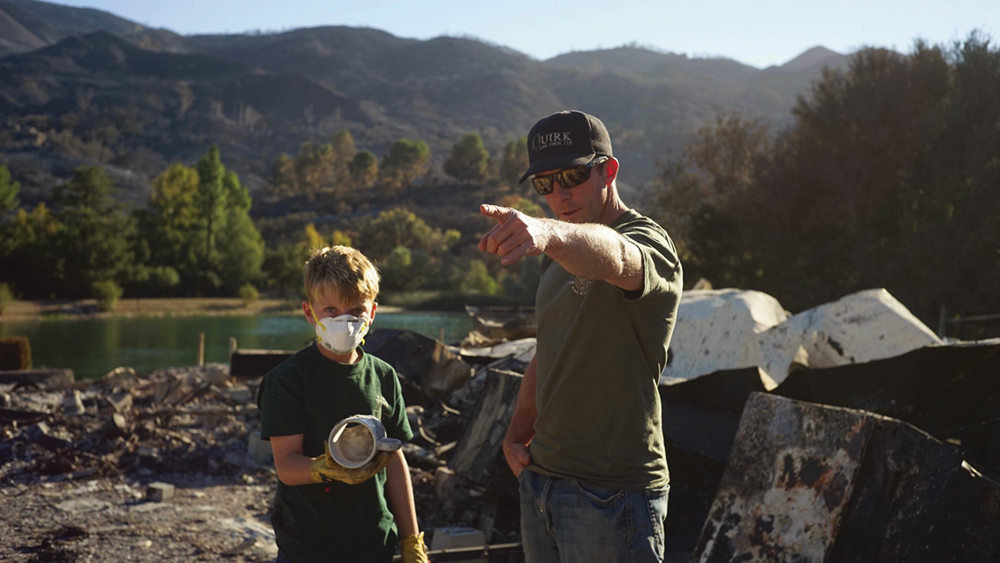 Upper Ojai’s Trevor Quirk and his son, Landon, find memories in the ashes of Seminole Springs.

Upper Ojai Relief has decided to “adopt” the mobile home community of Seminole Springs, where a reported 100 out of more than 200 homes have been leveled. “They’ve just been reduced to ashes,” said Quirk. “The initial objective is to sift through people’s homes looking for wedding rings, any sort of valuables that survived the fire … we’re sending in volunteers to team up with individual homeowners so they can point out where their dresser was that had rings in it, or whatever.”

To complete the first round of sifters Thames and Woodhams made, Ojai Lumber donated some of the materials and Upper Ojai residents Scott Oster and Anna Getty donated funds. These simple yet incredibly useful contraptions are comprised of wood two-by-fours nailed together in square frames of varying sizes, and covered on one side with wire mesh. Just lay flat, scoop a pile of ashes into one and shake to (hopefully) reveal heirlooms and treasures left undestroyed.

Volunteers in Upper Ojai use Summit Elementary as a home base to make sifters for those who lost their homes in the Woolsey Fire.

A few days after the start of the Woolsey Fire, Thames mentioned to the Upper Ojai Relief board that he thought it would be a good idea to make some new sifters, “and they said, ‘Great! We need them tomorrow,’” Thames laughed. “So I ran to Ojai Lumber and asked if they would donate two-by-fours,” Thames said. They pointed him to a pile of older wood and told him to take as many as he could. After working all day, he and Woodhams — who lost his home to Thomas last year — got to work making the first round of 50. “But when all is said and done, we’ll probably make 100s of these,” Thames said.

Tristan Thames works on one of the dozens of sifters he’s made in the last couple of weeks.

Thames, Quirk, and Colborn all urged people interested in lending a hand to email upperojairelieforg@gmail.com, and follow Upper Ojai Relief on Facebook to stay up-to-date with the organization’s efforts.

The quickest way to help is by donating funds directly through upperojairelief.com (it’s a nonprofit, so donations are tax deductible). Gift cards to places like Target and Amazon are also incredibly helpful. “All the feedback we got early on (during the Thomas Fire) was that the most useful things were gift cards,” said Colborn. “For people who have lost everything … a new package of socks is huge.”

Gift cards and donations of other items listed on the Upper Ojai Relief Facebook page can be dropped off at American Mattress Man, 2812 Camino Dos Rios in Newbury Park. 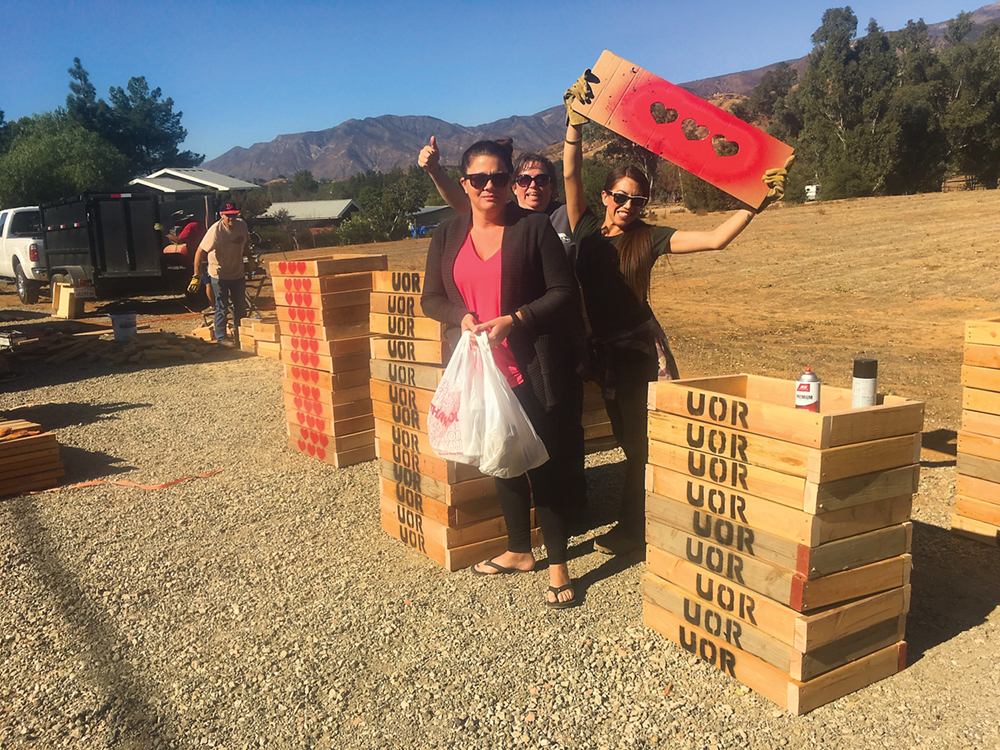 Ojai volunteers — many of whom lost their homes around this time last year — put the finishing touches on sifters.

“The first donations we received were from people who had lost their homes in the Thomas Fire,” Colborn said. “It was boxes of tissues and toiletries. They know all too well. … And a woman donated $1,000 worth of Target gift cards last night. The community at large has been so eager to help. We were recently having a conversation about donor fatigue — it’s been one thing after another this year. But people are still digging deep, whether it be $10, or a puzzle that’s been lightly used. It’s just incredible; the outpouring of love is just amazing.”