Tri-tip tribe: Searching for the best barbecue on the Central Coast

Story and photos by Katherine McMahon

Barbecue: Technically, it’s just food cooked over a flame. The term comes from a Native American word for slow cooking meat over a fire. But today there is so much cultural complexity that goes along with the word, particularly when meat is involved. Depending on where you’re at and who you ask, you’ll get very different definitions. While many famous barbecue styles come from the southern U.S., there are countless other varieties like Hawaiian, Korean, and even a style native to the Central Coast dubbed Santa Maria style. In my travels on the Central Coast, I have eaten at barbecue restaurants that encompass a range of tradition and innovation, drawing from regional preferences and those across the globe.

Santa Maria style barbecue started with local cattle ranchers cooking for their crews by placing big cuts of meat over smoldering red oak. A dry rub is used to add complexity to the smokiness of the oak. A spot that has mastered this is Rancho Nipomo BBQ, just off the 101 across the river from Santa Maria, where I stopped on a recent Friday evening. Blending traditional Santa Maria style with Mexican entrees, the menu features such items as smoked tri-tip burritos and barbecue tri-tip tortas. Rancho Nipomo was clearly popular with locals. The cantina dining area was full and there was live music — a guitarist who played a family-friendly mix of Frank Sinatra, Santana, and country tunes. A father danced with his two little kids while an elderly couple showed off their steps. The food was like a Central Coast’s version of comfort food, and the atmosphere was all about community. 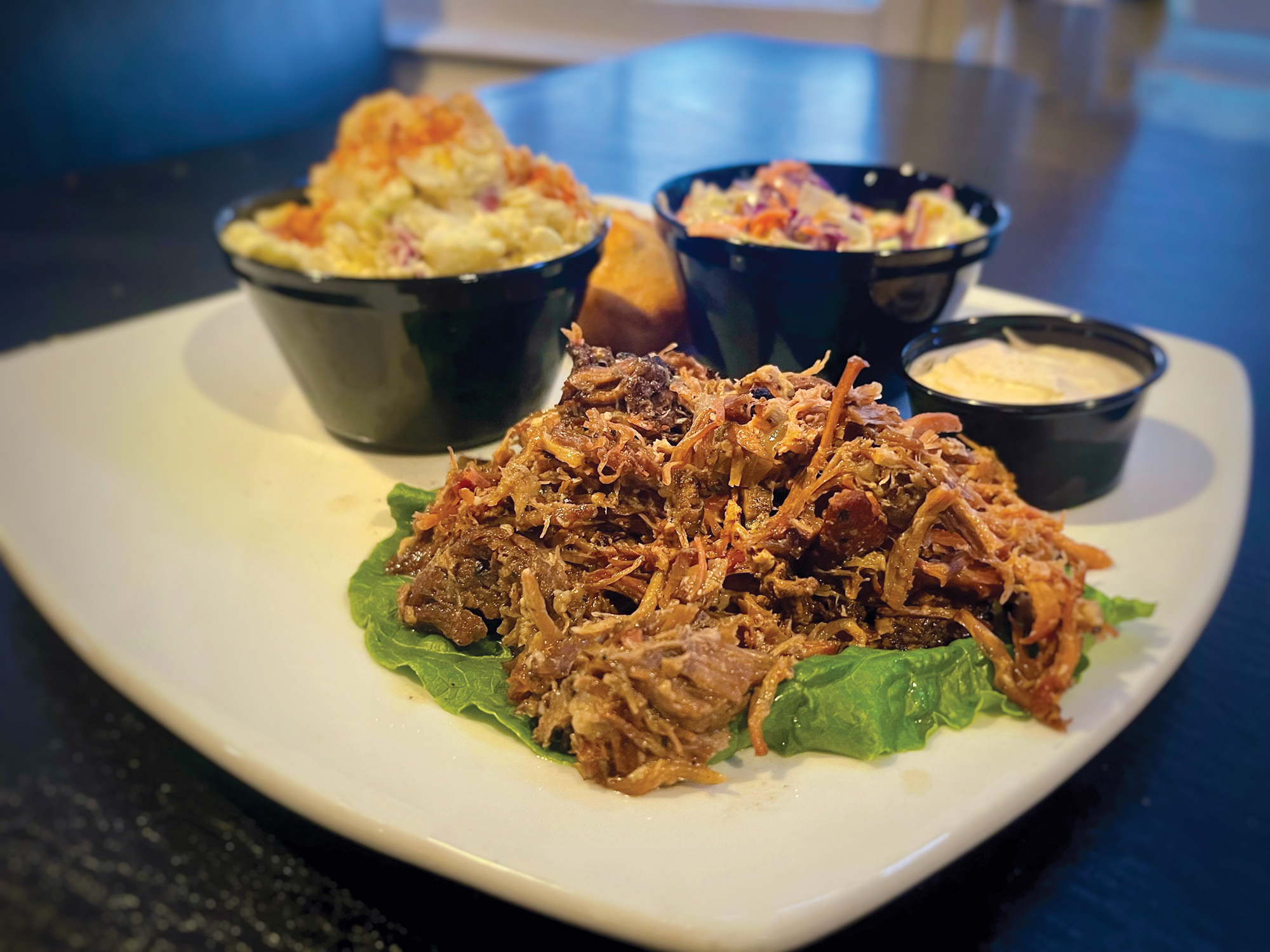 On a trip to the beach with my kids, I stopped for lunch at Rib Line By The Beach in Grover Beach, a bright red building with a cowboy atmosphere. The menu offers all the traditional barbecue favorites with sides like potato salad, coleslaw, and mac ’n’ cheese, all of which were excellent. The steak chili is award winning. But my favorite was getting the BBQ tri-tip salad, wrapped up in a burrito. The restaurant boasts a second location in San Luis Obispo, which also has a food truck for catering. Both locations have been gaining in popularity over the years, particularly after taking home first place in the People’s Choice Chili category at the World Food Championship in Las Vegas, and being featured on Man vs. Food Nation. 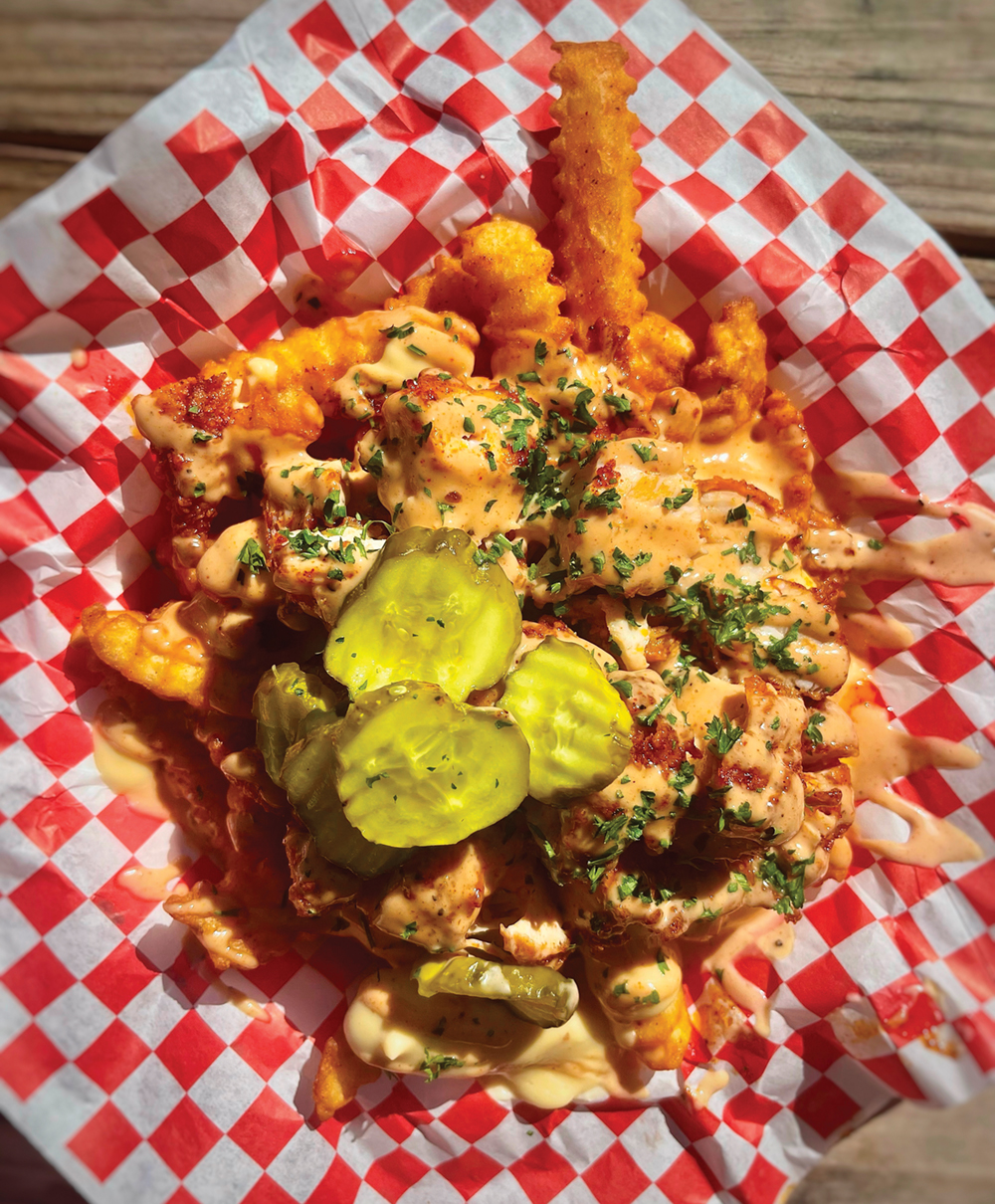 Back home in Ventura County, I stopped in for lunch at Smokin Jay’s BBQ, a casual counter-service eatery in the Harbor Landing building at the Channel Islands Harbor in Oxnard. It shares an indoor seating area with a sushi restaurant and seems popular with the servicemen from the nearby Navy base, but I preferred to take my order outside to sit by the boats. The menu features burgers and Nashville Hot Chicken sandwiches, but what drew me there was the barbecue fries: a plate of thick crinkle cut fries topped with barbecue tri-tip and melted gouda sauce. On some weekends the kitchen runs out of food due to the high demand from the public. The meat is a nod to Santa Maria style tri-tip, but the cheese sauce and pickles together with the fries gives this spot a fun, nontraditional vibe. 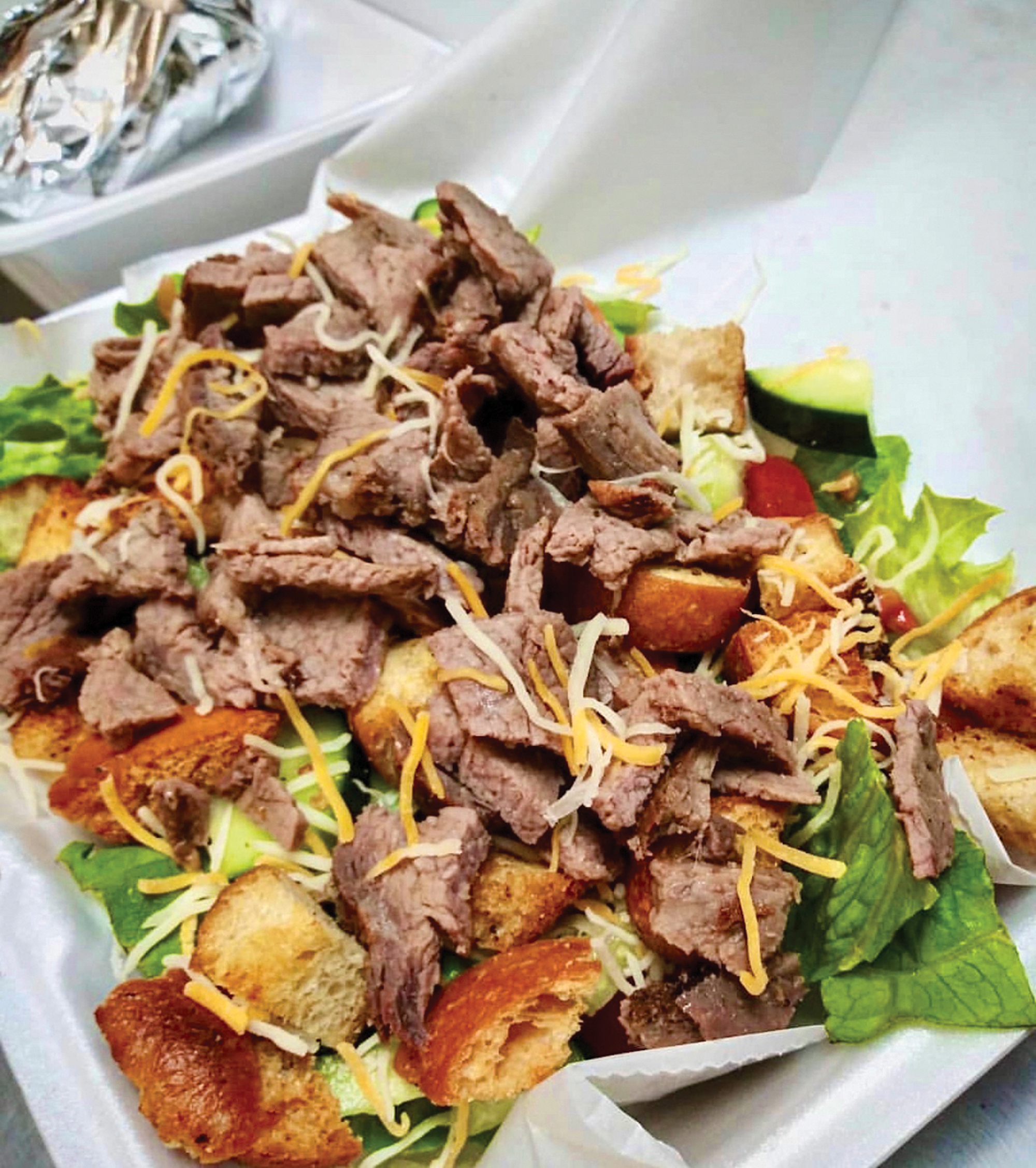 I was on the way to the movies with my family the first time when we stopped at Marshall’s Bodacious BBQ. Located in a small retail strip just north of the 101 at Victoria Avenue, Marshall’s is recognizable by the large rooster statue mounted on the roof. The smoker is parked out front and although there is a modest indoor dining space, most people here order their food to go. Marshall Schmidt has been in the barbecue business in Ventura for a long time, and has developed his own spice rub and special barbecue sauce that has made this spot the stuff of legends in the area. We sat in the car with our food and declared that this was the best we’d had in Ventura County. 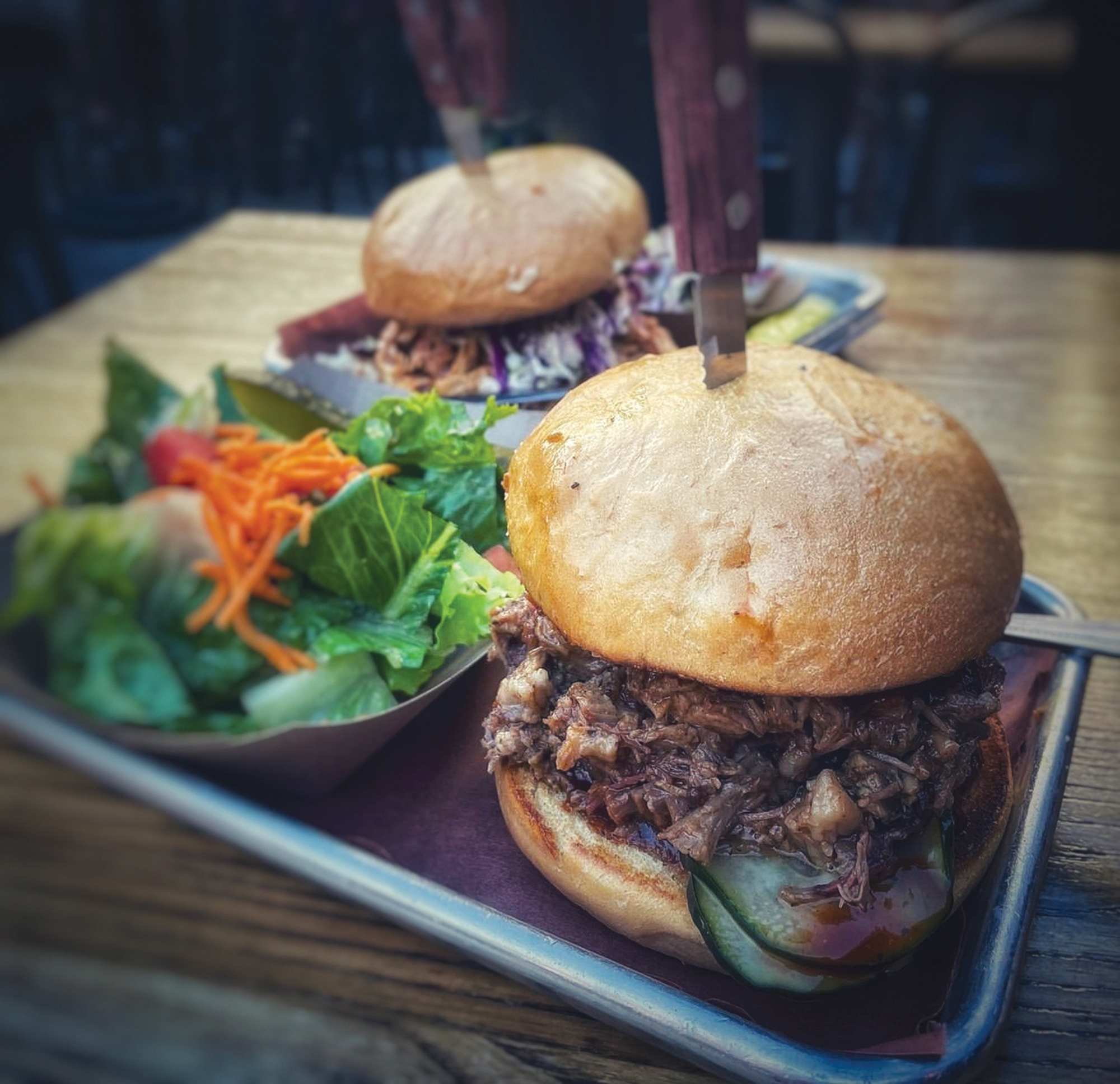 Since it opened in 2018, Jeffry’s Wine Country BBQ in Paso Robles has become a popular local hangout. The menu offers a range of barbecue sandwiches, tacos, and salads, as well as their signature mac ’n’ cheeses. There are also vegetarian-friendly offerings, craft beers, and local wines. Jeffry’s is tucked in Norma’s Alley between Park and Pine Streets, right in the heart of Paso. Wanting some downtime after a day of wine tasting I got my barbecue to go and took it back to the hotel. Owner and award-winning chef Jeff Wiesinger had a vision to create flavorful dishes that are delicious, made from scratch, and beautifully presented. And, of course, they had to pair well with the Paso wine scene. He calls it “wine country comfort food,” and he nailed it. Best barbecue salad I have ever had. 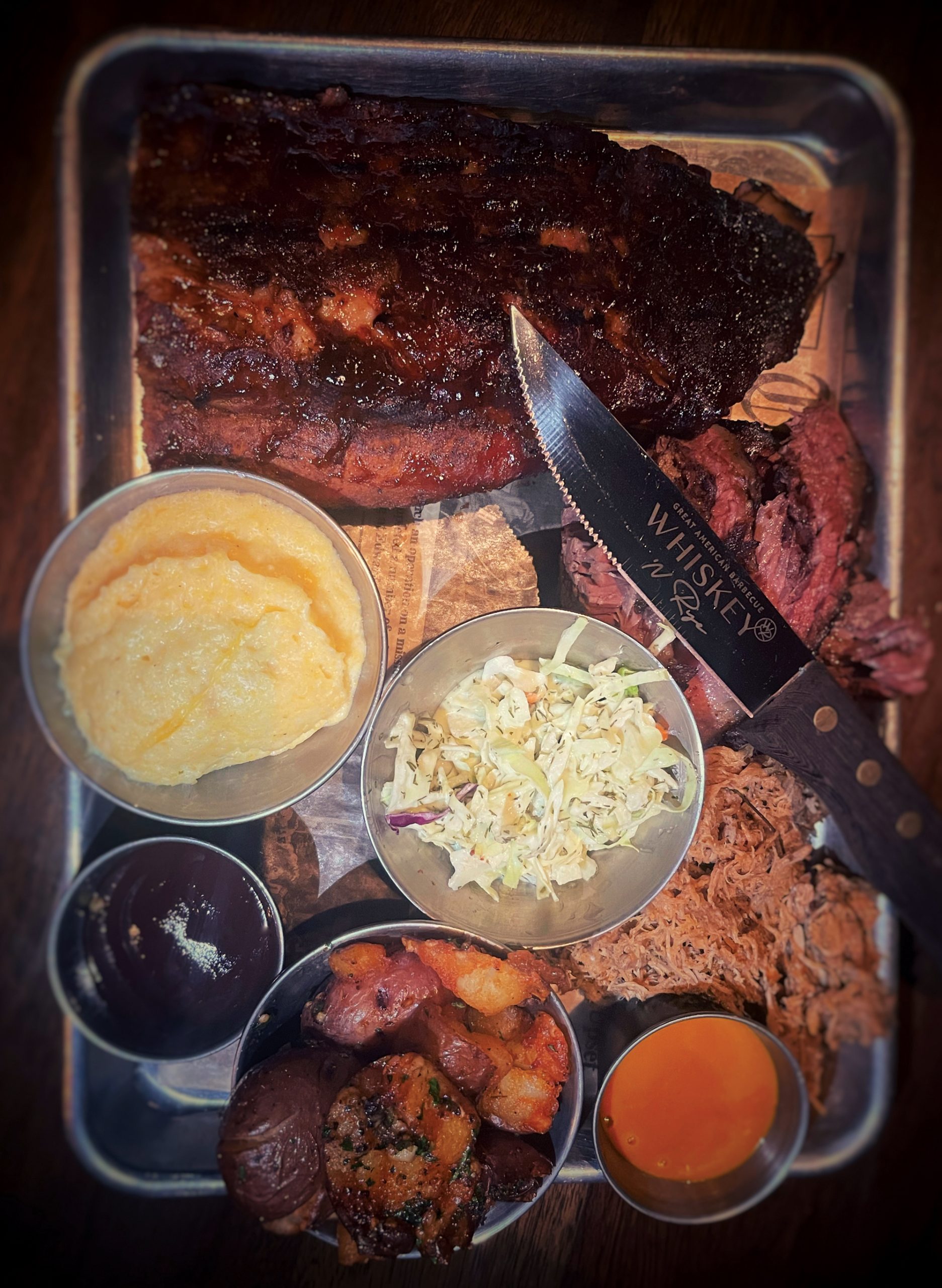 My favorite barbecue experience I’ve had so far on the Central Coast was at Whiskey ’N Rye, a new restaurant in Solvang. Less than a year old, this restaurant is the creation of Don Conner — also the owner of The Maker’s Son, which is another recent addition to the food scene over in Los Alamos. Whiskey ’N Rye has a sophisticated Western decor and offers a barbecue concept that mixes classics from a variety of American styles. Some standouts for me were the cast iron cornbread, made with jalapeños and served with salted honey butter; the brisket dirty fries, with pickled red onion; the grilled watermelon salad; and the BBQ sampler trio which featured a mix of ribs, brisket, and pulled pork. The drink menu was innovative, as well. I really loved the peachy old fashioned, an ideal complement to barbecue fare. I finished with a  skillet chocolate  chip cookie topped with McConnell’s  Ice Cream.