Tom and Rick Husted know their way around appliances. The brothers grew up in the family business, Husted Appliance Center, since the early ‘60s. Back then, their parents, Richard and Audrey, glassed in their Ojai home’s front porch and turned it into a Maytag showroom. They offered washers, dryers, all sorts of appliances, as well as in-home repairs and parts. After a few years in business, they changed over to a service-only company. When Tom graduated from Nordhoff High School in 1982, he decided to join his dad in business the following year. At that time they began offering appliances for sale once again. They’ve been on Bryant Street now as a full-service sales, parts, and repair center for 31 years and counting. 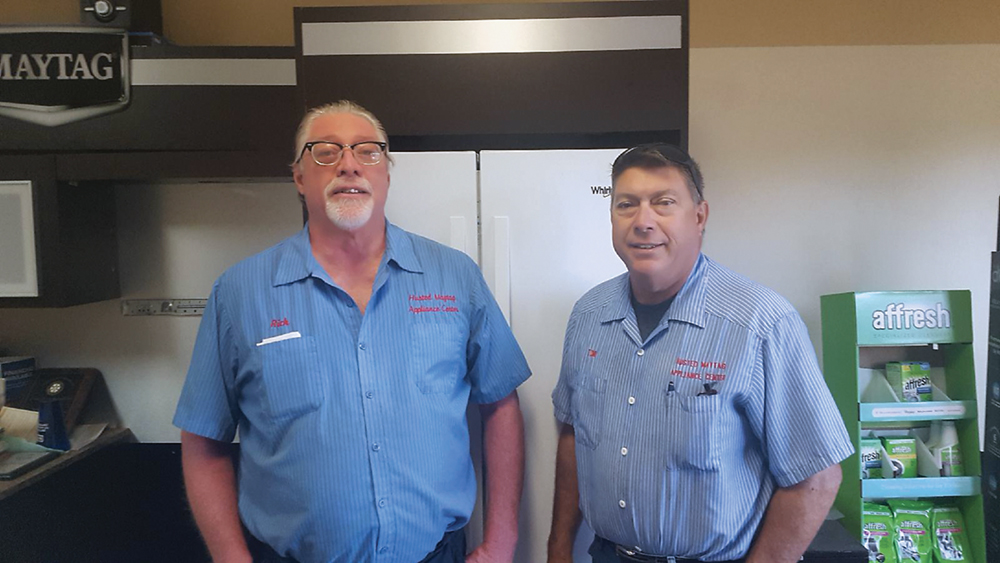 Rick and Tom Husted at the appliance center

Looking back now, over more than a half-century in business, Tom marvels over the fact that it all started with an advertisement his mom found one day. “It was an ad for a course on how to repair appliances,” Tom said, “so my dad took it. They came here (to Ojai) in their early 30s, and they already had a life … it’s amazing that they totally started over!”

But start over they did — with a growing family that would eventually include four children. Tom reflected on his mother’s dedication both to the business and the family. “She made breakfast, got the kids out the door, went to work, came home and made dinner, and tucked the kids in. She did that for years! It’s really cool to look back on all that.” He remembered his mother keeping the books “with a pencil and paper,” until the advent of computers. Her sons showed her how four weeks of year-end bookkeeping could be done in a half-hour on a computer.

Appliance technology has changed as much, if not more, than accounting technology over the decades. Tom pointed to the newest “smart” refrigerators, with which you can communicate via text “to see how much milk you have left in the fridge. Which is kinda scary,” he laughed, “but these innovations continue to make life somewhat easier.”

Today’s washers and dryers, too, have progressed. They now take into account customers’ interest in sustainability and the environment, significantly reducing water usage and often requiring soaps that are less harmful to the environment.

Tom thinks that’s a good thing. The gentler the soaps, the better for the environment; especially in grey water systems, which he says make up almost 50 percent of his repair business these days. Decades ago, clothes could get cleaned with stronger detergents and soak in 50 gallons of water. Now, they’re often using biodegradable soaps — and less soap all together, maybe two or three tablespoons of detergent instead of a cup. They’re also using significantly less water, from around 50 to just 20 gallons of water these days.

“And it’s not only how much water we use,” Tom pointed out, “it’s also about how much energy we use.” Think not only of soaps and water, but also how much energy is put into heating the water in the first place. Thankfully, Tom said, “Our soaps have gotten to the point that they don’t need hot water anymore … they are starting to be geared toward cold water washing.”

All of which, ultimately, means a different kind of appliance that requires different clothes washing techniques. Many of the repairs the Husteds encounter have to do with people misusing their washing machines. “We all remember those 20-year-old washers your mom gave you that were still going to work for 10 or 15 more years,” he said. “But in today’s world, it doesn’t happen like that. The manufacturers still make a good product, made in America, but it’s just a different product. You have to do laundry more like how your grandmother did it.” That means pretreating stains, and sorting laundry into similarly weighted and similarly colored loads. Don’t cram in huge, extra-grimy loads of laundry, Tom suggested. “Just follow the directions on the lid! Read the manual. … You have to slow down, maybe do an extra load, scrub the stains right, to get clean clothes. I mean, we don’t use lye on our clothes anymore, and we’ve probably been doing it wrong all along! There’s a fine line between what’s great for the environment and what’s good to get clothes clean.

Not everyone believes in the new stuff yet, he added, “but it’ll happen. And 30-40 years from now, it’ll change to something else.” Tom pointed to the skepticism his grandparents had when the “automatic” washers and dryers came out. “They didn’t trust them, that they could get clothes clean! But our generation, they barely know what a wringer-washer was.”

The Husteds are proud to be part of an increasingly small population of multi-generational business owners. Tom pointed to the Rains family (Rains Department Store) and the Chisum family (Chisum’s Floor Covering) as fellow “lifers” in the Ojai business community. And while products change, the Husteds’ commitment to small-town service won’t.