Sleeping with the Ghosts of the Central Coast

These chilling accommodations are a great place to rest your head. Just keep one eye open. 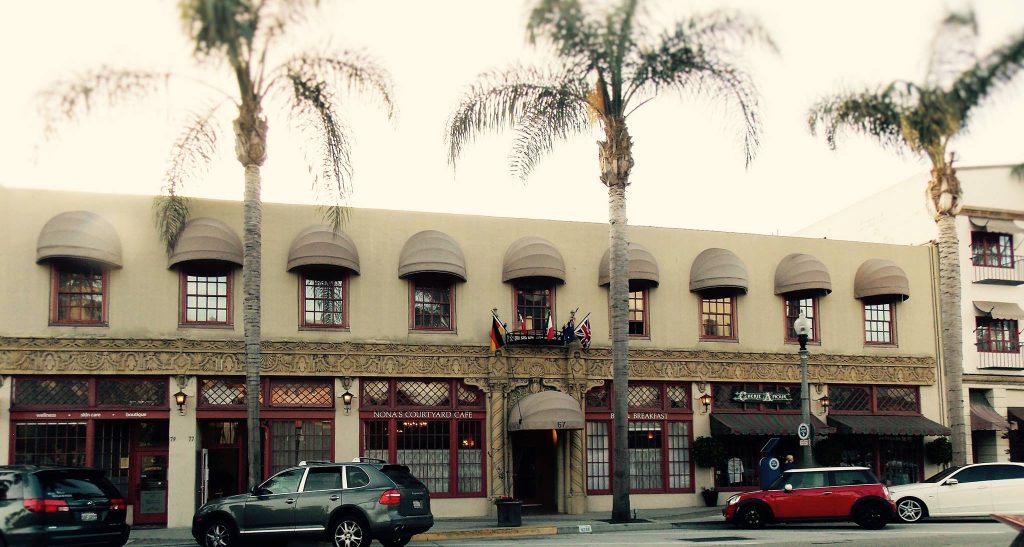 In Ventura, the Bella Maggiore Inn has been operating since 1926 with a full staff and a few extras. Guests note their paranormal encounters in a thick book in the inn’s front parlor.

Just how many poltergeists roam the Bella Maggiore’s halls is a mystery. It’s rumored that the ghosts were victims of an organized crime unit that purportedly ran its business from the inn. Within the dark past of the now-pleasant inn are the deaths of previous guests: Mark, who died of a drug overdose, and Elizabeth, a small child who was murdered on the first floor, to name a few.
But the most frequent midnight visitor is Sylvia Michaels. Many who visit the Bella Maggiore have an encounter with what they can only describe as her specter. Around 1947, she was murdered — or died by suicide — in Room 17 where she lived for a period. Some say she was a writer, but most believe she was a lady of the night who rendezvoused with her clients at the inn. Perhaps the fact that she only knocks on a door if the room is occupied by a man is evidence of the latter. She also has a tendency to prank men by moving their wallets, though both men and women report smelling her signature scent, a heady rose-infused perfume.
While you’re visiting, if you feel that the air has been sucked out of the room or notice flickering lights, it may be signs of an otherworldly encounter at the Bella Maggiore.

Constructed in 1911, the Glen Tavern Inn has a long and spirited history. The hotel’s motto, “Where the Past Comes to Life,” is dead-on, as ghosts allegedly haunt the rooms to this day. In fact, the hotel is so renowned for its uninvited guests that it was featured on an episode of Ghost Adventures in 2013 and “The Dead Files” in 2014.

Rumored to have been a speakeasy during prohibition, the Glen Tavern was no stranger to debauchery. Dark happenings beyond the standard gambling and drinking took place within its walls.
It’s said that a man caught cheating at cards was murdered in Room 307, where his unsettled soul remains. The room is a hub for paranormal activity, guests say.

However, patrons have reported their belongings being moved and seeing the form of ghostly apparitions all over the inn.  Even a piano appears to have been enchanted, as the instrument’s bell-like music can be heard intermittently during the day or night.
Mediums who investigate the sightings are recurring guests of the Glen Tavern Inn. The chill of unnamed specters haunts its halls, so only book here if you’re prepared for a thrill!

You’ll want to sleep with the lights on at the Hyatt Centric Santa Barbara, which was once a  WWII hospital.
Both employees and guests have reported paranormal activity such as creaky bodiless footsteps that pace back and forth along the hallways, shadows that seem to move of their own volition, and airborne objects. It makes one wonder if perhaps some veterans decided to stay on long after the war ended.

Even the wires connecting the electrical current seem to be penetrated by supernatural forces, as the lights flicker on and off without cause. I’d bring along a flashlight just in case you’re thrust into total darkness.

Right around the witching hour at the Hyatt Centric, between three and four in the morning, it’s rumored that motion detectors sense activity when there is nothing around to be seen with the human eye. It would seem these particular ghosts have a knack when it comes to electricity. They certainly know how to turn on my sympathetic nervous system! Whether you take flight or fight, a late night encounter here is sure to get your heart pumping. 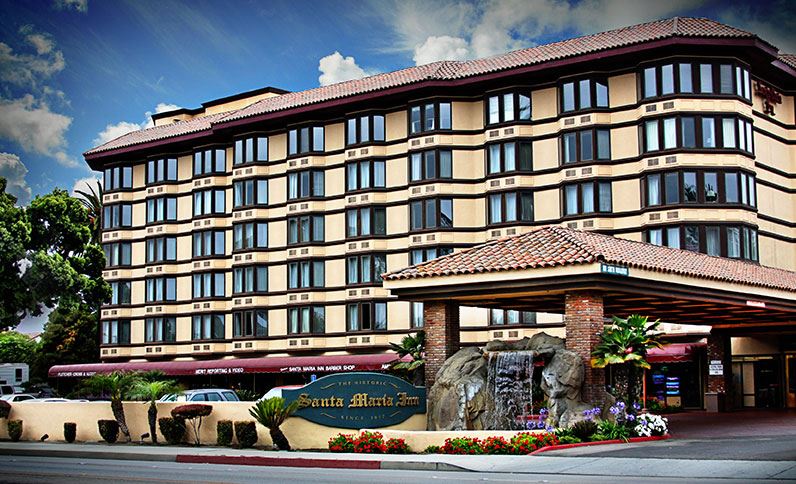 This Historic Santa Maria Inn isn’t just a popular place for politicians and celebrities; according to local lore, it’s a favorite place for poltergeists.

Built in 1917, word got out about the inn’s quality accommodations, and famous folks journeying along El Camino Real regularly stopped in. Those who found refuge at the Santa Maria reportedly include President Herbert Hoover, Charlie Chaplin, Cary Grant, Marilyn Monroe, Bob Hope, William Randolph Hearst, and Rudolph Valentino among others.

Rumor has it that Valentino — a heartthrob actor who starred in several well-known silent films — checked back in to the hotel after his untimely death at the age of 31. But he was missing one vital thing: his body! His room door, marked with a star and his name, is said to be knocked on at all hours of the day or night, though when guests open the door, there’s no one behind it. There have even been accounts of clientele finding the Latin lover sprawled out on the room’s bed.

Another room, said to be haunted by a sea captain and his mistress, may not have the notoriety of Valentino, but that’s compensated by ghostly pranks such as cold spots, slamming doors, strobing lights, and a ghoulish surprise at the foot of the bed.
But these occurrences aren’t restricted to the rooms; professionals found evidence of supernatural activity in the Santa Maria’s gardens and the cellar. There’s even mysterious piano music that serenades the patrons. But guests can rest assured: These ghosts are known to be friendly, if a bit mischievous. 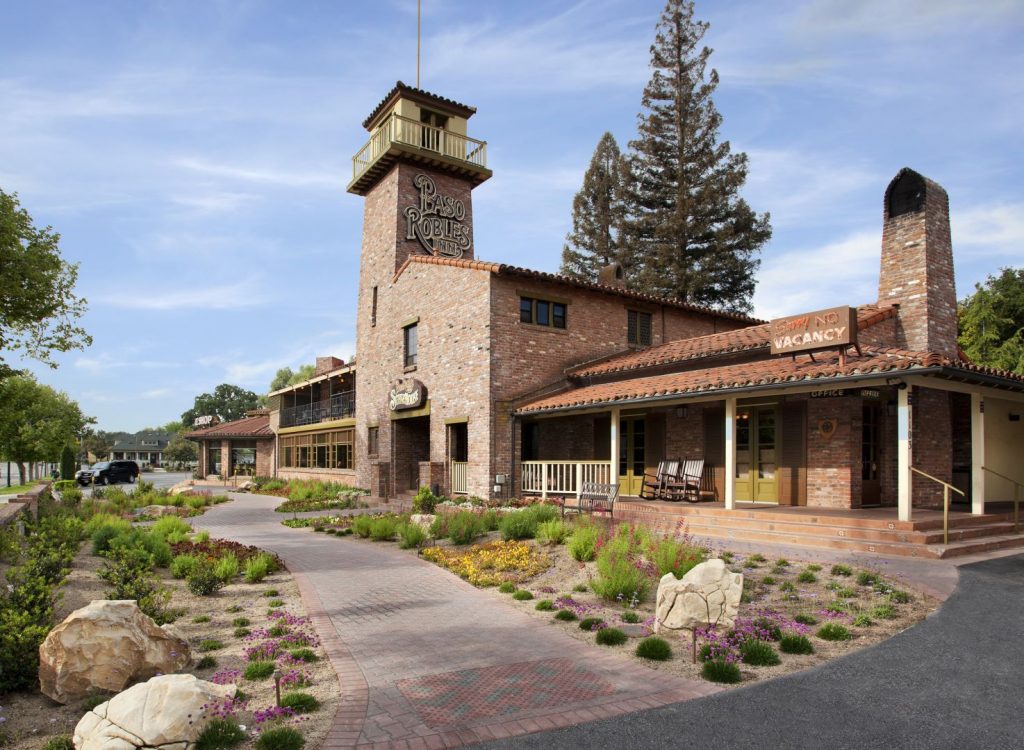 There’s unfinished business at the Paso Robles Inn. A brick hotel was originally built here in 1890 by architect Stanford White, who also designed Madison Square Garden and the Boston Public Library. The Paso Robles Inn was supposed to be everlasting. But, in 1940, careless guests started a fire that resulted in its destruction. J.H. Emsley, the night clerk, discovered the blaze and sounded the alarm. Everyone escaped alive, except him. He reportedly died of a heart attack before learning that all the guests had made it to safety.

In 1945, some of the original bricks were used to rebuild the hotel, including the notorious Room 1007. Shortly thereafter, the phantom phone calls from that room began. The phone would ring and the hotel attendant would pick it up only to hear nothing on the other end. Perplexed, staff at the Paso Robles Inn sought the aid of the phone company, who reported no mechanical problems. The calls are usually made on stormy evenings. Once, instead of calling the front desk, the room dialed 911; even spookier, the call was placed at just about the same time the distress call was made in the 1940 fire.

A few hotel employees have conjectured that Emsley’s spirit, infused into the walls of the new wing, continues to strive to protect the hotel guests to this day. Book 1007 early, as the room haunted by this heroic ghost is in high demand.

Be sure not to cheat at cards at the Glen Tavern Inn. You may just end up roommates with the specter in Room 307.

Did silent film actor Rudolph Valentino return to the Historic Santa Maria Inn after his death?

Stormy evenings make ghosts nervous — especially J.H. Emsley. Rumor has it he likes to make calls to the front desk when the skies turn angry over the Paso Robles Inn.