Since its incorporation in 1969, Simi Valley has acquired a well-earned reputation as a suburban community offering a relaxed lifestyle and inviting place to raise a family. Located in the southeastern portion of Ventura County, it is probably best known as home to the Ronald Reagan Presidential Library. However, Simi Valley has many charms, making this a fun, interesting day trip destination. If you are looking for culture, history, something quirky, and wide-open spaces away from the hustle and bustle of city crowds, you’ll want to visit Simi Valley. It’s full of best-kept secrets for a wide range of interests and ages.

Strathearn Historical Park and Museum is a great first stop for your tour of Simi Valley. This is not only Simi Valley history, this is California history. Here you can take a trip back to yesteryear. In 1968, The Strathearn House and surrounding grounds were donated to the Rancho Simi Recreation and Park District, and has since been managed by the Simi Valley Historical Society. Additional structures of historical significance have also been moved to the park. Take a docent-led or audio tour to learn the history of Simi Valley. Explore 20 stops on your walking audio tour, including: The Saint Rose of Lima church (1902); the Strathearn House (c. 1892); the Simi Adobe (the oldest standing structure in Simi Valley, dating back to the late 1790s); and Rancho Simi, a California State Historical Landmark which was originally a Spanish land grant to Santiago Pico in 1795. Take some time to wander back in history as you enjoy strolling through this six-acre park with historical buildings. See simihistory.com for more. 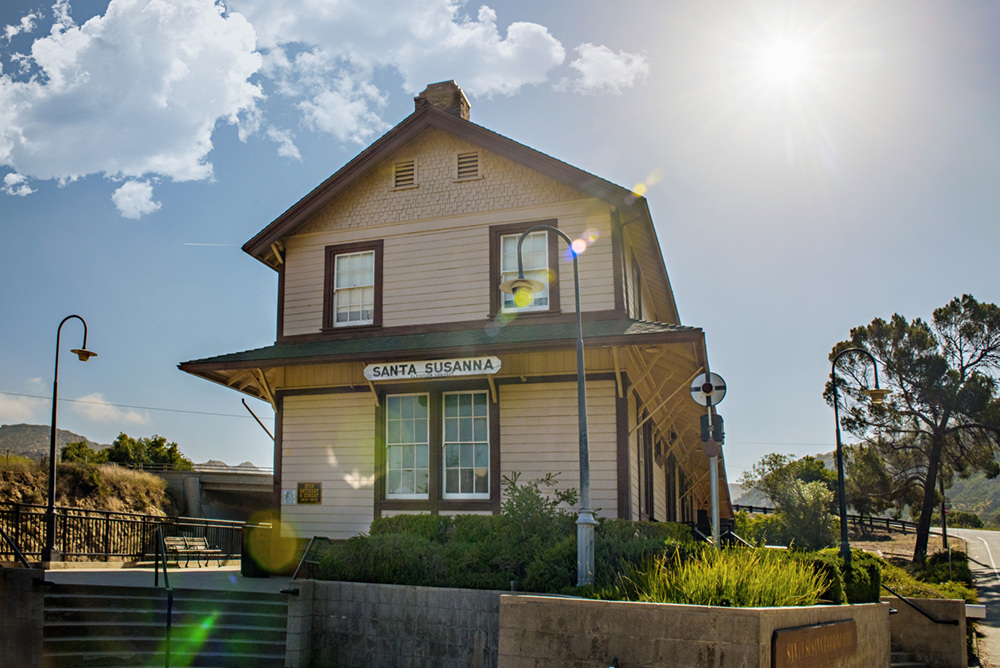 The VFW Military History Museum, located in the Simi Town Center, is open to the general public and displays artifacts from WWI, WWII, Korea, Vietnam, the War on Terrorism, Iraq, and Afghanistan. Its mission is education, “reaching out to the young and adults alike, and enriching both groups on the importance of our military history from the birth of our nation to the present War on Terrorism.” Several Vietnam veterans volunteer their time to give tours and answer questions. (Don’t forget to thank them for their service!) Check out visitsimivalley.com for more.

The Santa Susanna Depot and Museum is another fun stop. Built by the Southern Pacific Railroad in 1903, the depot was active until about the early 1970s, transporting freight and passengers. See what a typical passenger waiting room was like back in the early 20th century as you take another step back in Simi Valley’s history. For more, see santasusannadepot.org. 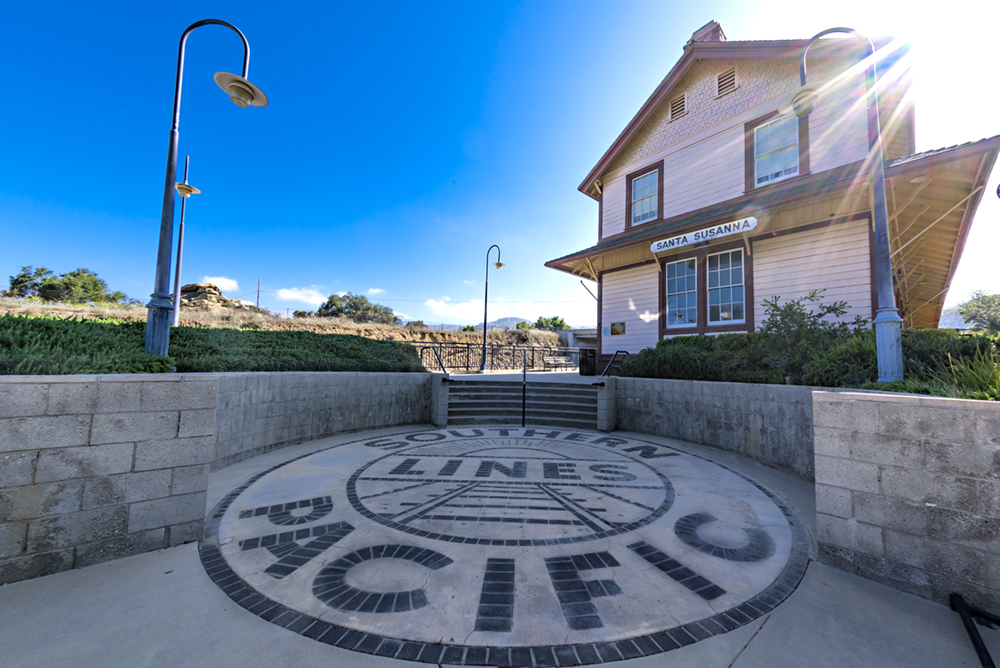 The Ronald Reagan Presidential Library, as referenced above, may well be Simi Valley’s most prominent location. Opened in 1991, this is not only the burial place of Ronald (40th President of the United States) and Nancy Reagan but contains documents and artifacts from Reagan’s time as president. In addition, there is a wide variety of permanent and visiting displays. Among the permanent displays is Air Force One Pavilion, where you can walk through the presidential plane. Also included here: Marine One, several presidential vehicles, and even a full-sized replica of the Oval Office where President Reagan signed bills into law, met with heads of state, and oversaw the stewardship of our country.

Past special exhibits have included: Egypt’s Lost Cities, the World of DaVinci, Baseball: Celebrating Our Great American Pastime, Nancy Reagan: A First Lady’s Style, and Magna Carta: Essence of Democracy. Coming in March 2023 will be Auschwitz, an extraordinary collection of more than 700 original artifacts of immense historical and human value. The Reagan Library also hosts debates, book signings, seminars, and many other events. Check reaganfoundation.org for further information and to plan your visit.

Hiking and mountain biking trails are numerous in Simi Valley. The Santa Susana Mountains boast a large assortment of trails that vary in length and difficulty. Enjoy nature, wildflowers, and native life in this beautiful natural area. You will be amply rewarded with outstanding vistas and surprises in viewing flora and fauna. Two popular trails are Rocky Peak and Hummingbird Trail. From Rocky’s 2,715-foot peak, you will be mesmerized by an incomparable panoramic view. At the very peak of the Hummingbird Trail, meanwhile, you will be surprised as you discover a colorful graffiti painted cave.

For old movie buffs (especially Western lovers), check out the trails at Corriganville Park. This Ventura County historical landmark was once home to Western movie sets where shows such as Fort Apache, The Adventures of Rin Tin Tin, Sky King, The Lone Ranger, and many others were filmed. Unfortunately, fires in the late 1970s destroyed the sets, but you can still find interpretive signs and old structure foundations as you wander the area. Gene Autry, Roy Rogers, John Wayne, and of course Ray “Crash” Corrigan were some of the stars that filmed here. During your visit, if you close your eyes for a few moments, and listen carefully, you may even hear a voice from your memory saying, “Who was that masked man?” or “Yo Rinny!” 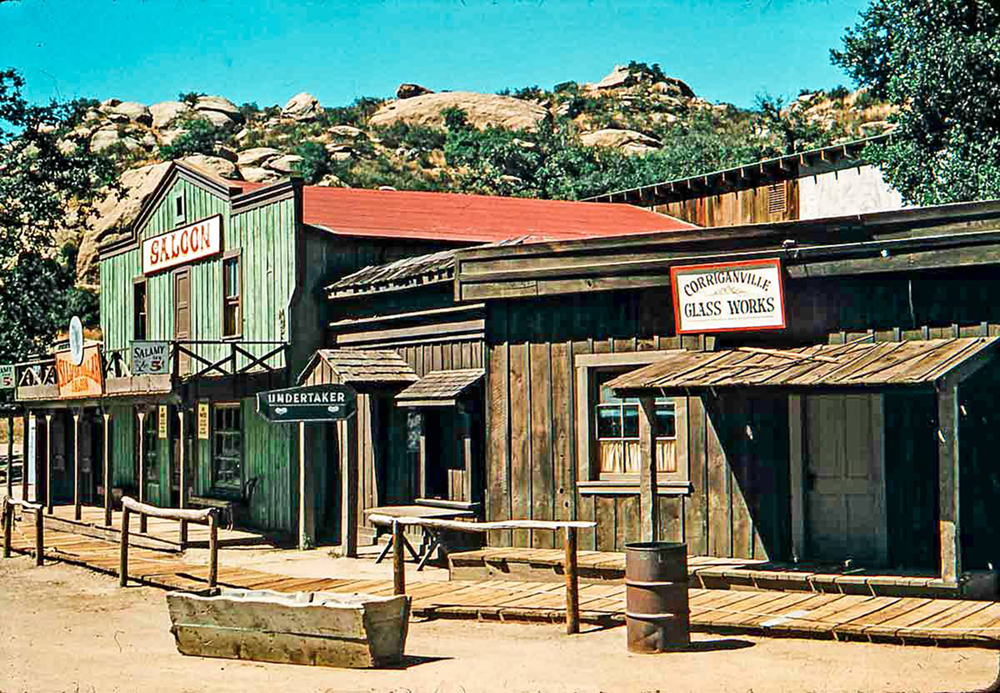 Photos courtesy Simi Valley Chamber of Commerce Corriganville Park, before fires destroyed the buildings in the 1970s. It is now a great place to hike.

If you prefer a bit more sport as you take in the outdoors, head over to Simi Hills Golf Course. With its expansive greens, trees, and water features, it’s a great place to unwind and challenge your handicap as you take in the rolling hills. Recently voted Reader’s Choice Winner by the Ventura County Star, this is a great getaway. This championship golf course offers 18 holes, a practice facility, putting green, and lighted driving range. And if it’s professional instruction you’re looking for, Simi Hills offers that as well. After several hours on the links, relax at the Birdie Bar with a sandwich and adult beverage, and enjoy live music on Saturday evenings (weather permitting). Schedule a tee time and more at simihillsgolf.com.

Theatre, Dance, Music, and The Arts

The Simi Valley Cultural Arts Center has been bringing exciting live theatre, dance, music, and visual arts to the residents of Simi Valley and surrounding communities since 1995. Not only is this a venue providing live entertainment, but the facility also serves the community as a gathering place for lectures, workshops, and educational programs. This historic building started out as a Methodist congregation, and during its almost 100-year history, has also served as a Jewish Synagogue and a mortuary, prior to being purchased and converted to the arts center. 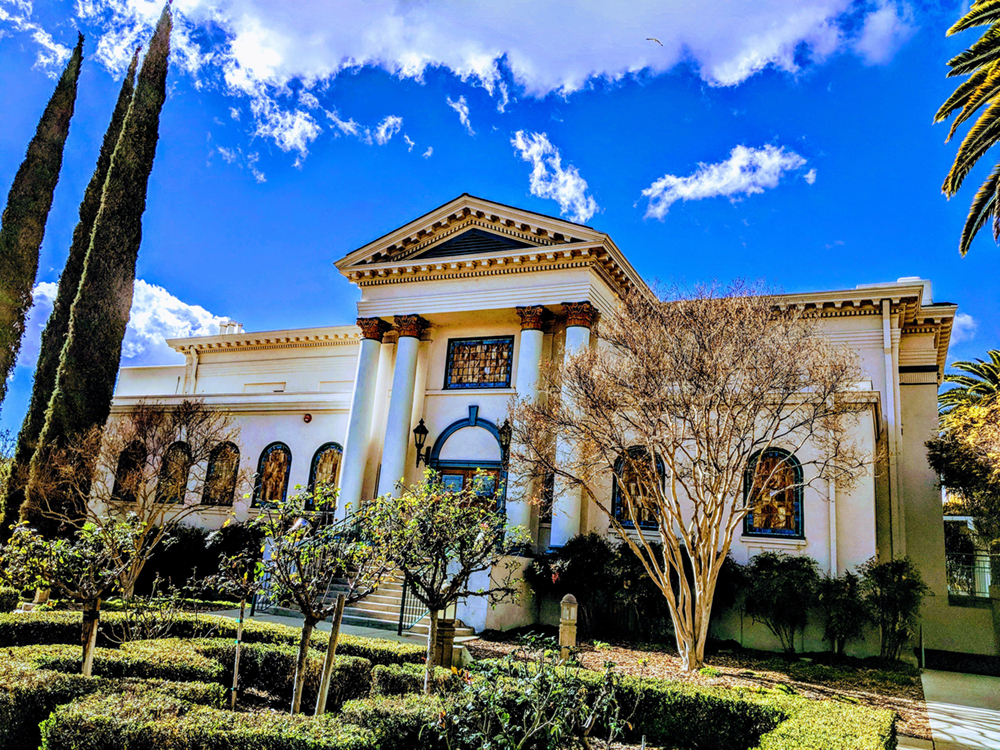 Some recent past productions and events include: 1776: The Musical, The Hunchback of Notre Dame, Beauty and the Beast, Elf: The Musical, and a series of tribute concerts (such as Simon and Garfunkel). Get tickets and more information at svvac.org. 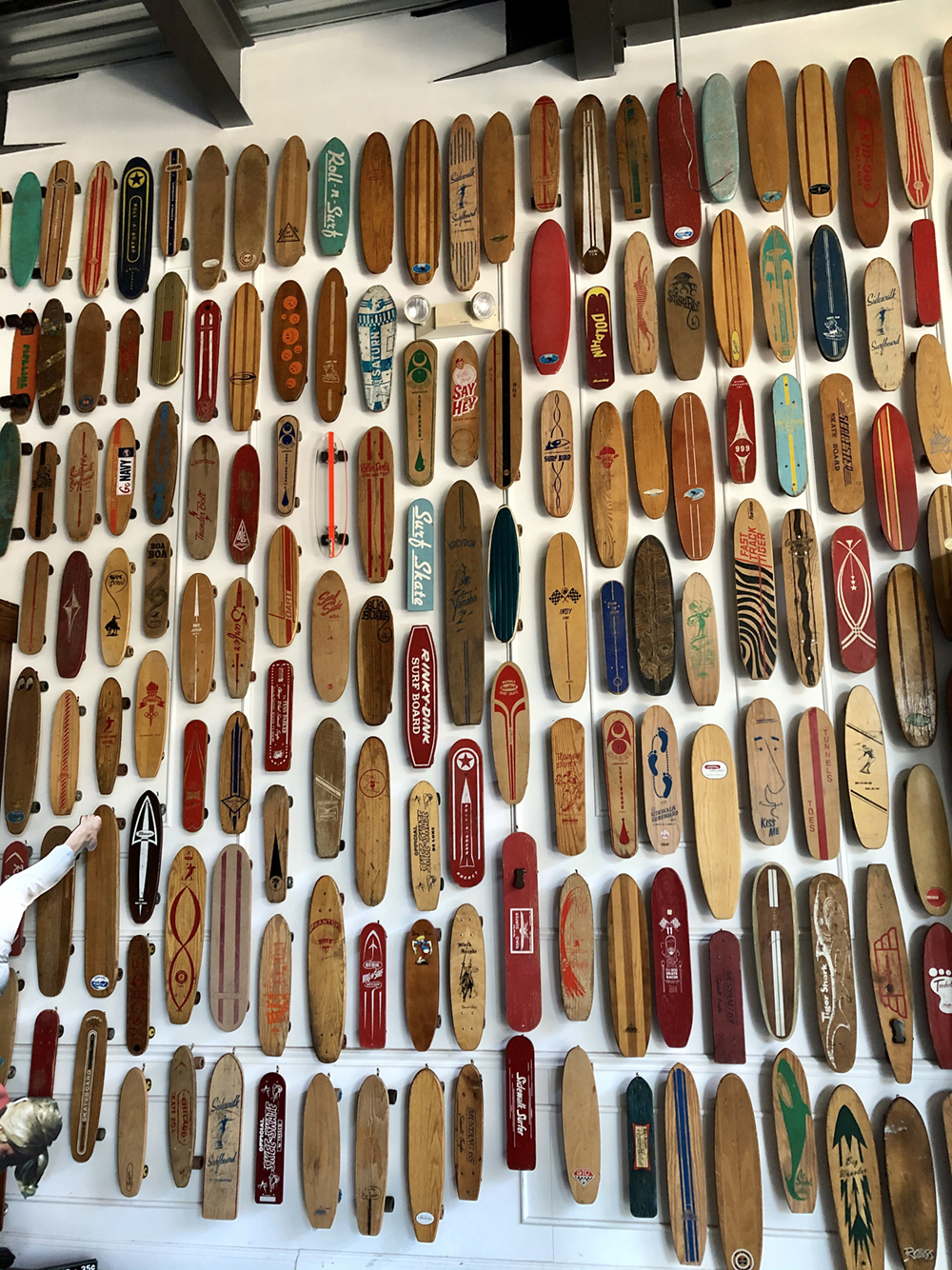 The Skateboarding Hall of Fame and Museum is the perfect place to take skaters of all ages. Photo’s courtesy of Todd Huber

Looking for something unusual? Quirky and fun? Well, Simi Valley has that too! The Skateboarding Hall of Fame and Museum, located a few doors from the VFW Museum in the Simi Town Center, will attract and thrill any skateboarder, young or old! Now in its 26th year, the museum is overseen by Todd Huber, who created it as a tribute to the spirit and sport of skateboarding. Each year there is an annual event with new inductees into its Hall of Fame. Todd Huber has been a passionate boarder for decades and created this space not just to show the history and evolution of the sport, but, as Todd says, “This is just to honor the people that have made this sport great.”

The museum boasts an entire wall dedicated to the evolution of the skateboard, with hundreds on display. You’ll find original skateboards that were made using old roller skate wheels, boards with the VAL SURF logo — which was the first skateboard shop — as well as several other boards displaying their changing sizes, styles, shapes,  and technological developments. There is also an extensive library, a skate park (which can be rented by individuals), a skateboard school, and retail shop. Find hours and more at skateboardinghalloffame.org.

Just a few miles down Hwy 118 lies Grandma Prisbrey’s Bottle Village, which is probably one of the quirkiest, off-beat, folk-art creations you have ever seen. This 25-year project — the creation of Tressa “Grandma” Prisbrey, which she began in 1956 at the age of 60 — is a fantasy cornucopia of shrines, wishing wells, walkways, structures, and pure fancy, built mostly from tens of thousands of bottles and other discarded materials. This is Grandma Prisbrey’s “Wonderland.”

The Bottle Village is such a unique and individual folk-art creation that it holds four historic designations. It’s California Historical Landmark No. 939, Ventura County Cultural Landmark, City of Simi Valley Cultural Landmark, and it’s on the National Register of Historic Places. Bottle Village visitors must schedule a private tour with one of the docents by emailing preservebv@gmail.com, but even driving by will put a smile on your face. For additional information, including availability of public tours, refer to bottlevillage.com.

Simi Valley, surrounded by the Simi Hills and Santa Susana Mountains in Ventura County, is an easy to reach destination, offering a varied selection of places to visit, see, and explore. Take a trip to Simi to experience culture, the great outdoors, California history, and the unusual. You will be amazed and pleased. What an entertaining day trip!