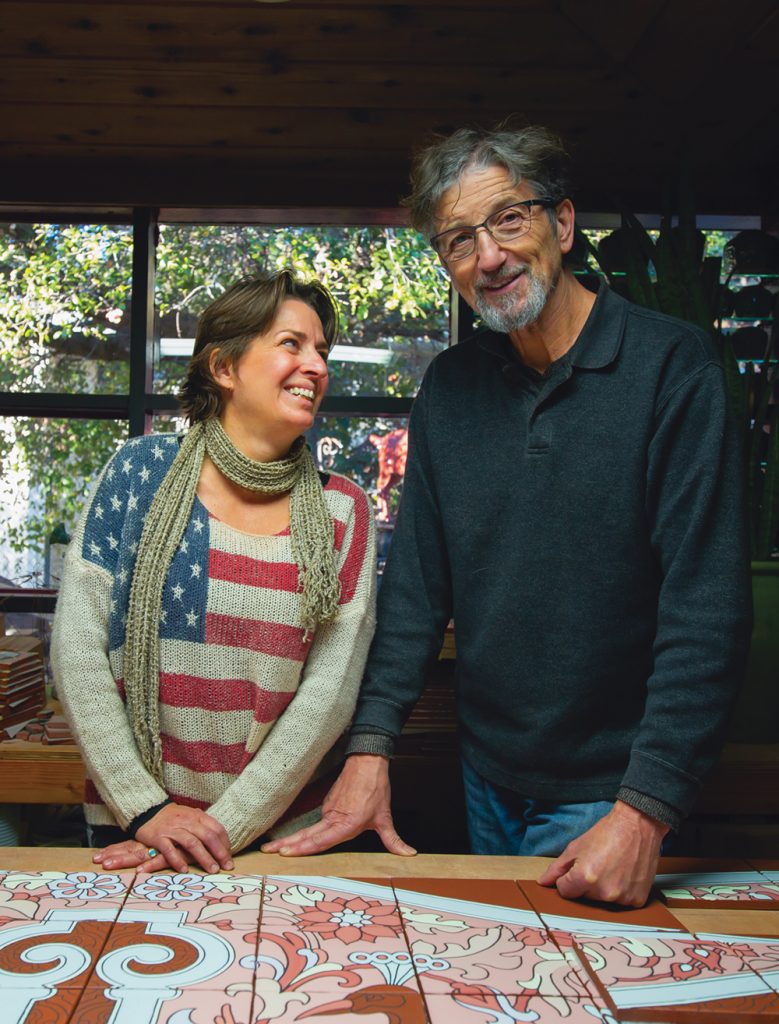 If you’ve ever needed custom tilework in the Ojai Valley, there’s a good chance you’ve gone to RTK Studios. There aren’t many folks who haven’t seen the ornate tiles that have made RTK a household name in the area. Whether adorning a fountain in a central court-yard or depicting a floral scene in a giant mosaic, owners Richard Keit and his wife Mary Kennedy have their footprint in just about every corner of the valley. While they operate from their shop in downtown Ojai, their work can be found all over the world. Clients ranging from Grammy-winning musician Phil Collins to the Royal Family of Jordan have kept the couple busy over the years. “Phil Collins’ place was a big job,” said Mary, who joined Richard in his business and life in 1990. “We worked for a few years on that one. There were fountains, fireplaces, bathrooms, murals — I mean, it was floor to ceiling tile. There were some very lavish layouts.” Richard didn’t discover tile making overnight. 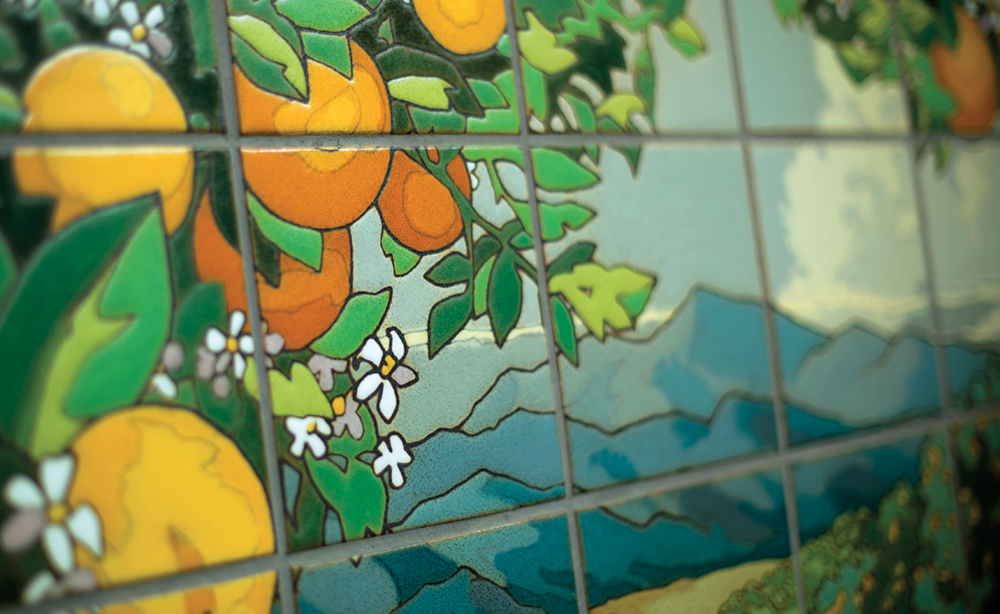 The story of his passion for ornate ceramic tile is rooted in his childhood, when his family would take trips to Catalina Island. “My Dad had us kids for the summer,” he said. “He had a cabin cruiser that he would take to the islands. During the week, he would go back for work and leave me to watch my seven sisters. I started running out of ideas to keep them entertained and needed something for them to do.” What he would find was tile. Tile, tile everywhere. As it turns out, the island was full of it. Keit would soon find ways to keep his family busy with the tile they would find across the island. “We went all over Avalon to look for any tile we could find,” he said. “Back then, the front street had a sidewalk that was all done in broken tile shards. About one out of 10 was a piece of deco-rative tile. We found that we could take rubbings of the tiles using the edges of pencils. I had them hunting down broken tiles to try to get the whole thing on a rub. It was like a scavenger hunt.”

Left: Keit then uses a suction tool to add color to the tiles. Right: RTK Studios has an impressive stockpile of ceramic tiles ready for just about any tiling project.

Before long he realized that he could restore damaged or broken tiles using cement and acrylic paints. It was then that he set out on a covert operation to restore some of the islands most precious tiles. “William Wrigley Jr. had created the largest bird sanctuary in America on Catalina,” said Keit. “He had these giant tile bird murals. All of them were damaged and crumbling. No one at the time saw the value in those.“I had to do something, so I went to the island on several occasions to restore the tiles,” he continued. “I hadn’t been authorized, so I had a friend be my lookout while I went to work. Over a period of about a half dozen trips I had fixed them all. Someone on the island finally noticed all the tiles were fixed but they hadn’t hired anyone. They even put out an ad to ask who had done it. About 10 years later they figured it out when I was doing a job restoring tile for the Wrigley family. ”From there we would catch the attention of many heavy-hitters from all walks of life, including renowned mathematician and blackjack guru, Ed Thorp. He would be a prominent figure in Keit’s life for the next few years, hiring him for many jobs at his various properties.

Left: About 40,000 handmade tiles sit in boxes on shelves and in storage bins, while other featured pieces are placed in their showroom. Right: Colored powders are mixed together to create any number of shades of color for various applications.

“Ed Thorp made a big difference in my life,” said Keit. “I don’t really know how he hunted me down but I ended up doing a lot of work for him. My studio was just 60 square feet back then. ”Now, with the new expansion of their studio, Richard and Mary are looking forward to having a larger work area for the many steps it takes to make tile and produce projects for their vast client list. For more on their products and projects head to rtkstudios.com.