Story and photos by Randy Graham

The year 2020 has been tough for many of us. For those of us with a passion for cooking (and eating), it has been particularly tough, with restaurants closing their doors, not to reopen for the foreseeable future if at all.

I place orders every few days at my favorite Ojai and Ventura restaurants because I believe in supporting them. But the food doesn’t taste as good when I get it home and plate it. Don’t tell anyone, but I often eat it out of the box with plastic knives and forks. That’s just not right.
Eating fresh and tasty food is not easy during the quarantine unless you are a very good home cook. To make it easier for you to enjoy tasty meals at home, I’ve chosen some of my favorite recipes to prepare on the seven major holidays celebrated this fall and winter. It is my hope these recipes will help you put 2020 in the rearview mirror and get a proper start in the new year, which can’t come quickly enough for me.

Halloween evolved from the ancient Celtic holiday of Samhain. Over the centuries, Halloween transitioned from a pagan ritual to a day of parties, costumes, carved pumpkins, and trick-or-treats. Why not celebrate it with my bowl and dip recipe? Not a trick, but a comfort food treat for sure! 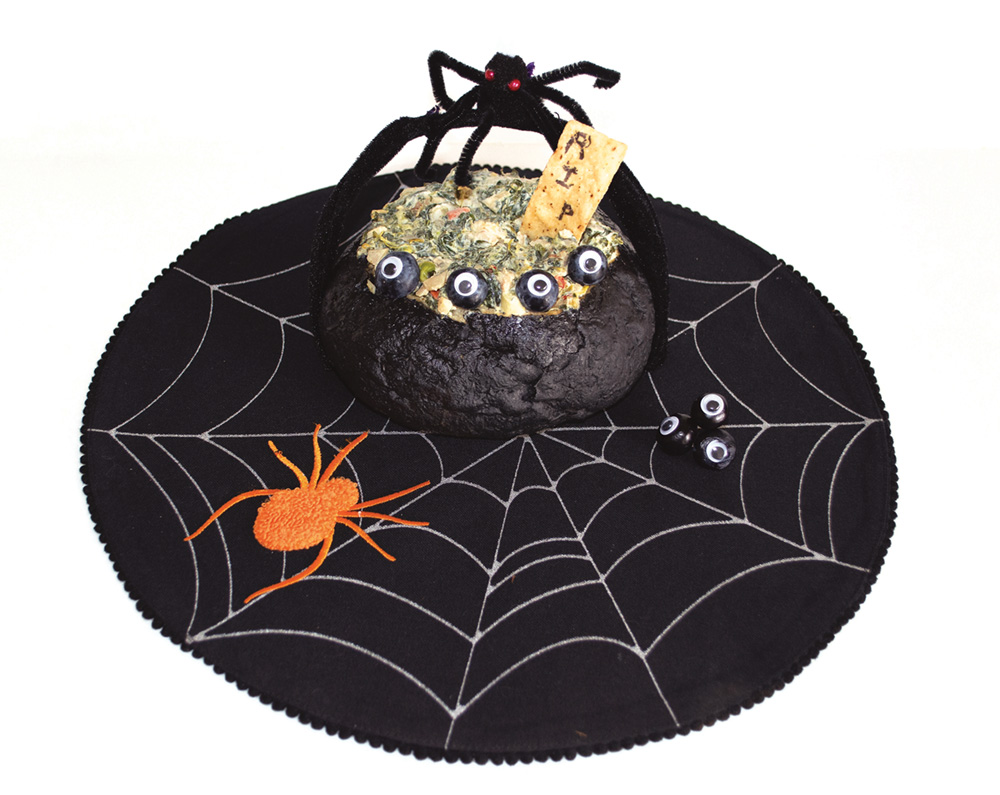 Cook spinach according to package directions. When cooked, drain thoroughly by pressing spinach in a colander until you’ve squeezed out all excess moisture. Mix the spinach with green onions, dry soup mix, sour cream, mayonnaise, water chestnuts, and garlic salt. Set aside for approximately two hours    (overnight is better) to allow dry soup to re-hydrate and for flavors to blend.

When ready to serve, spray paint the outside of the bread with edible food-coloring spray until it looks like a black cauldron (optional). Let dry completely, then cut the top off of bread and discard – hollow out bread, making a bowl. Fill bread bowl with spinach mixture. Serve with tortilla chips for dipping.

In 1621, the Plymouth colonists and Wampanoag Indians shared an autumn harvest feast that is acknowledged today as one of the first Thanksgiving celebrations in the fledgling colonies. It wasn’t until 1863, in the midst of the Civil War, that President Abraham Lincoln proclaimed a national Thanksgiving Day to be held each November. Why not prepare this recipe for your Thanksgiving celebration? 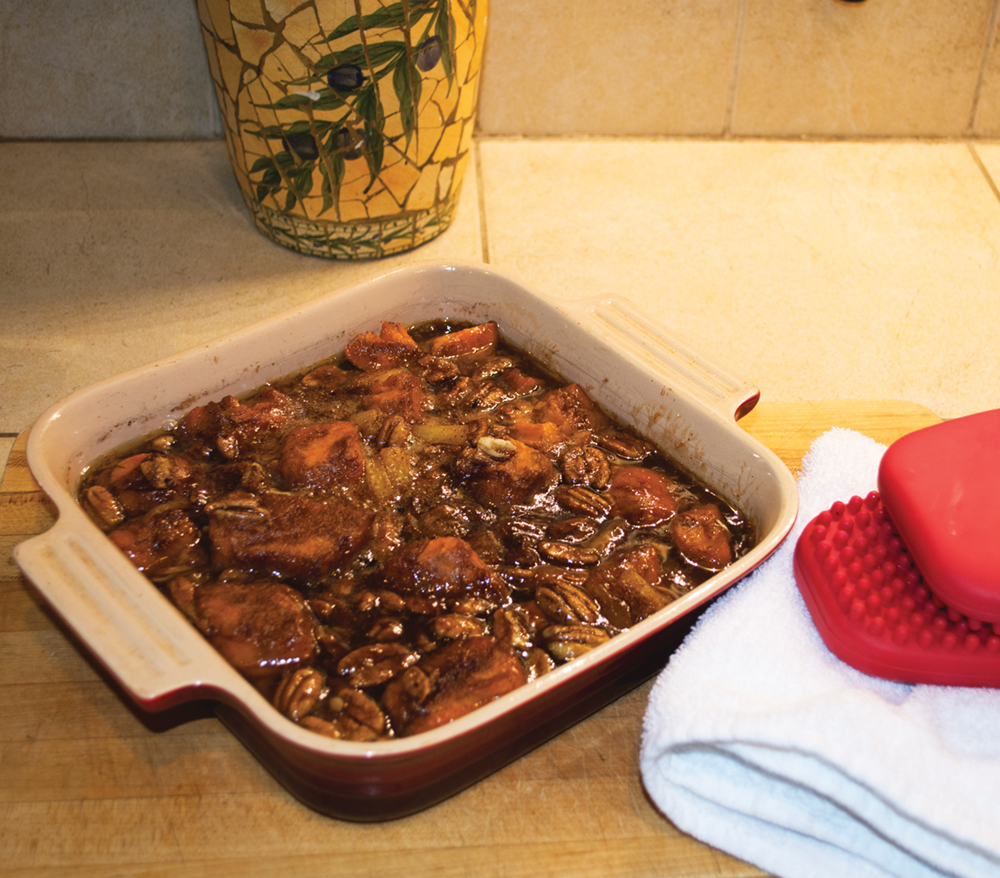 Preheat the oven to 350 degrees. Prepare a 9-by-9-inch baking dish with cooking spray.

Peel and cut yams into ¼-inch slices. Parboil in a large saucepan over high heat for five minutes. Drain, and rinse with cold water (to stop the cooking process). Set aside.

Place the butter into a medium saucepan and melt over medium heat. Add pineapple, cinnamon, nutmeg, clove, ginger, and sugars. Remove from heat and mix thoroughly.

Chanukah is the Jewish wintertime “festival of lights,” celebrated with a nightly menorah lighting, special prayers, and fried foods such as latkes (potato pancakes) and jelly-filled donuts. It is celebrated for eight days, beginning December 10 this year. Although brisket is not fried food, it is enjoyed during many Jewish holidays, including Hanukkah. Here is my recipe for brisket.

Preheat oven to 300 degrees. Rinse the brisket and pat dry. Rub both sides of the meat with salt and black pepper.

Heat a large skillet on medium heat. Drizzle two tablespoons of the olive oil into the pan. Brown the brisket on both sides – it will take four to five minutes per side.

While brisket is browning, pour canned tomatoes, garlic, brown sugar, apple cider vinegar, and 1½ cups broth into a blender or food processor. Add two teaspoons of salt and ¼ teaspoon of black pepper. Pulse until garlic is chopped small, and all ingredients are combined.

Remove the browned brisket from the skillet and set aside.

Drizzle two more tablespoons of the olive oil in the same skillet and add the onions. Sauté over medium-high heat for four to five minutes or until they begin to soften. Add the carrots and celery. Sauté for another five minutes. Pour the vegetables out of the skillet and onto a plate. Set aside.

Add the remaining ½ cup broth to the same skillet and let it heat on medium-high heat. Use a spatula to scrape up any browned bits and pan juices clinging to the skillet. Set aside.

Cover the roasting pan tightly with a layer of parchment paper followed by a layer of foil (the parchment forms a protective layer between the meat and sauce, which is acidic, and the foil). Place the brisket in the oven. Let it roast undisturbed for five to seven hours. It will take about one hour per pound of meat (leaner cuts of meat like grass-fed may take longer; test for doneness).

When fully cooked, the brisket will have shrunk in size. It is ready if it flakes when pierced with a fork. Remove brisket from the pan and let it rest on the cutting board fat-side up for 20-30 minutes.

While the brisket is resting, pour the sauce and veggies from the roasting pan into a smaller saucepan. Skim fat from the surface of the sauce, then reheat the sauce until hot, but not boiling. Set aside.

Cut the fat cap off the brisket, then cut the brisket in thin slices against the grain. Arrange slices of brisket on a serving platter. Top with hot tomato sauce and veggies and serve with a smile!

The winter solstice is the longest night of the year and celebrates the first day of winter. It occurs on or about December 21 every year. One of the most famous celebrations of the winter solstice takes place in the ancient ruins of Stonehenge, England. Thousands of Druids and Pagans gather there to chant, dance, and sing.

Want to wake up to something warm on the first day of winter? No, I’m not talking about your partner or spouse. I mean something warm for your belly and for your palate. Even Emeril Lagasse would like these grits. Bam! 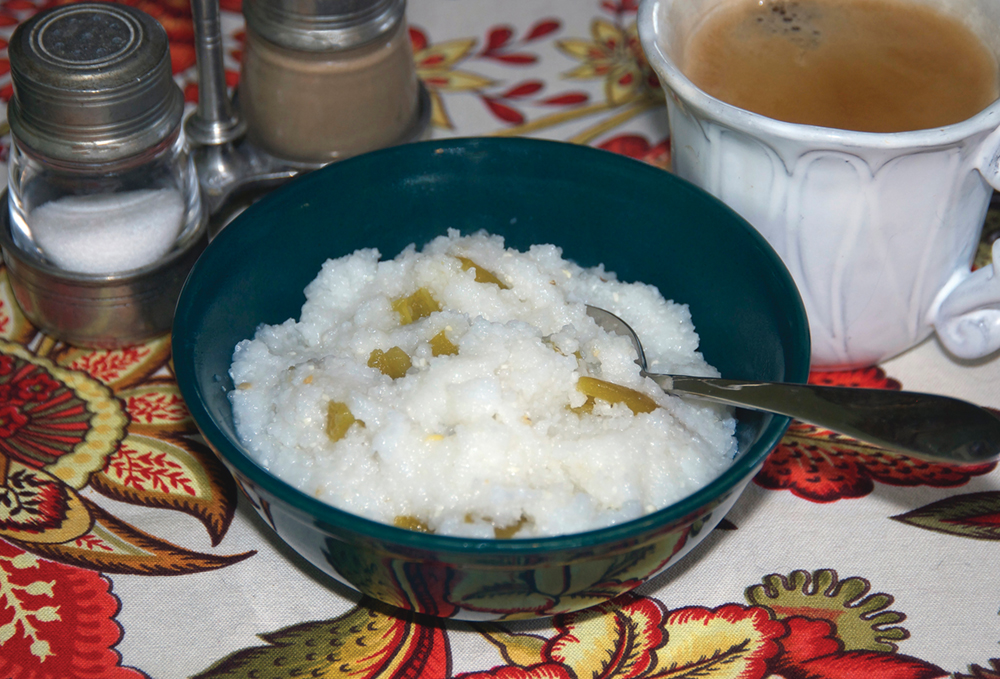 Bring milk, salt, and pepper to a boil in a medium saucepan. Pour in grits and whisk vigorously to blend. Reduce heat to medium-low and continue cooking, frequently stirring until thickened, about 25 to 30 minutes. Add more liquid (water or milk) as needed. The grits should be done and still hot as you finish preparing the peppers and onion mixtures.

Place the peppers directly on the grill (leave the cover open), occasionally turning, until blistered and blackened on all surfaces, about three to five minutes for each exposed surface. Remove from grill and set aside to cool. Once cooled, run the peppers under a stream of cool water and pull off the blackened skin. Remove seeds and stems. Stack the roasted peppers and cut them into ¼-inch-wide, 2-inch-long strips. Set aside.

In a large skillet, heat the oil over medium-low heat. Add the onion and salt, and cook, occasionally stirring, until softened and lightly browned, about 15 minutes. Set aside. Gently fold the horseradish into the grits along with the roasted peppers and sautéed onions. Serve immediately.

The celebration of Christmas started in Rome about 336, but it did not become a major Christian festival until sometime in the 9th century. Many Christmas traditions, such as decorating trees, started in Germany and later spread to other parts of the world, including the United States. One of the traditions in our household is to make a generations-old pecan pie recipe. If you have a sweet tooth as I do, this is the ultimate comfort food. 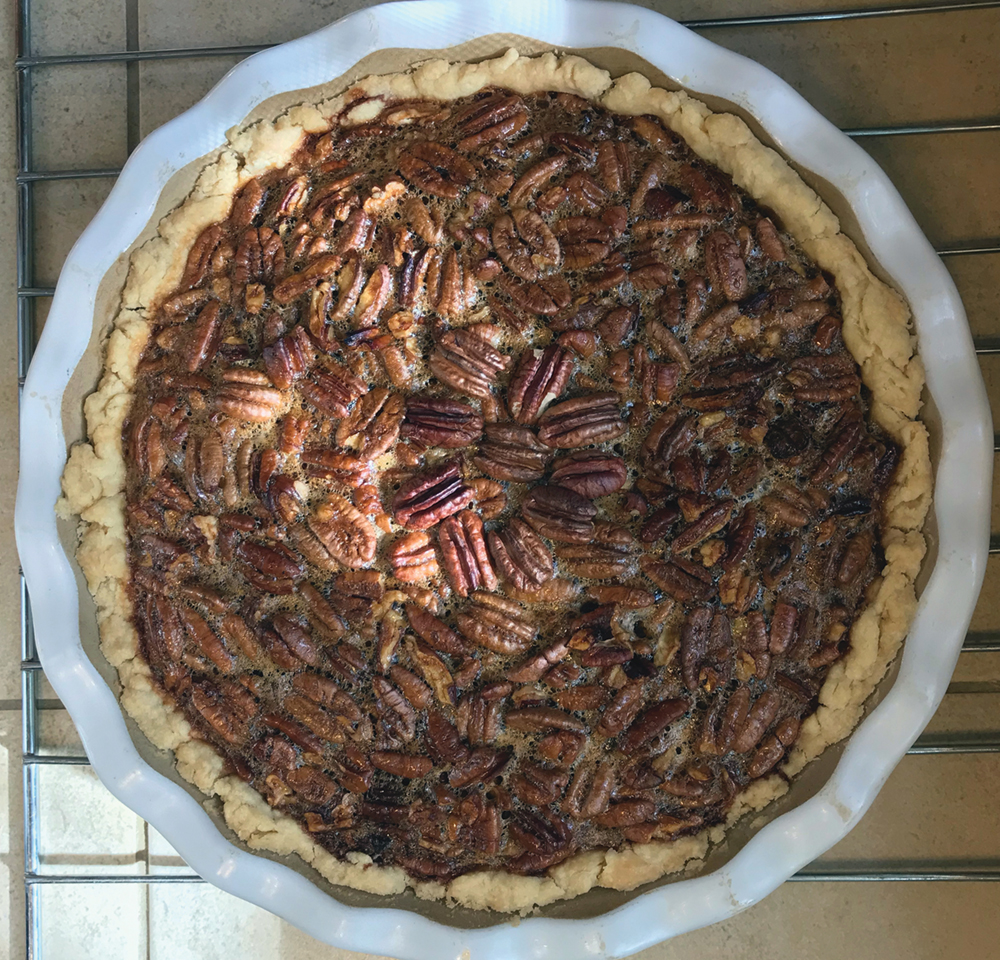 Break eggs in a bowl and beat well. Add syrup, sugar, and rum extract. Mix well. Add pecans and stir to incorporate. Pour mixture into the unbaked pie crust and cook at 450 degrees for 10 minutes. Reduce oven temperature to 300 degrees and bake for another 35 minutes. Remove from the oven and let sit for about 15 minutes before serving.

New Year’s Day:  Wake Up to Champagne and Strawberries

I like to celebrate the new year in style. By “in style,” I mean breakfast in bed. Here’s how to do it. 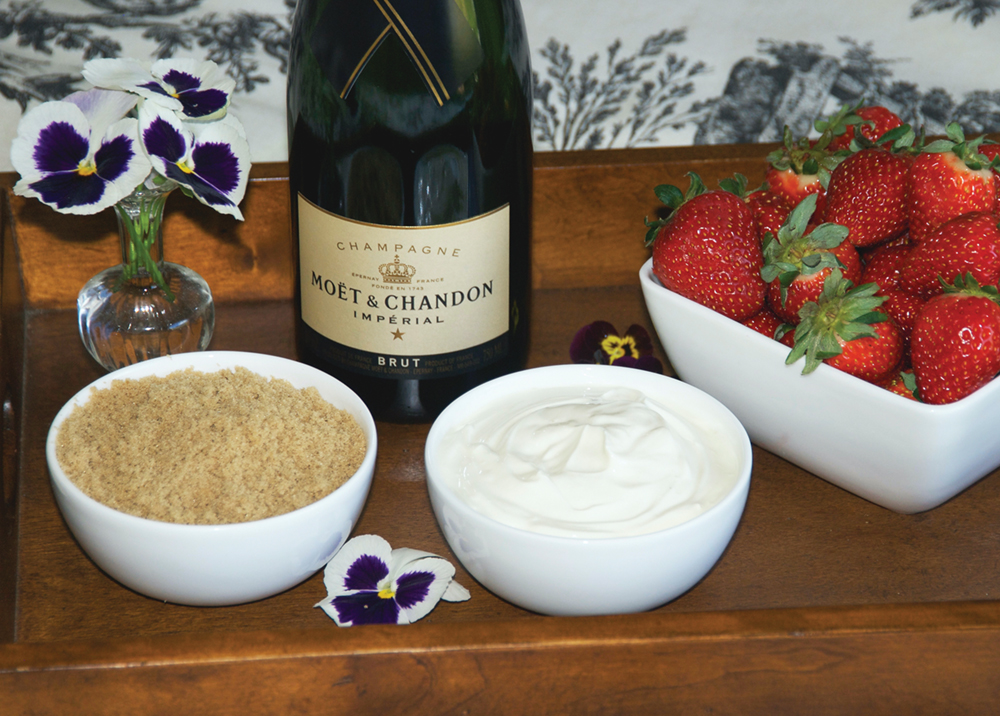 It is important to start with good quality champagne and fresh strawberries. Moët & Chandon Brut Imperial is my go-to bubbly. Pour a flute of champagne. Then, dip a strawberry in a small  bowl of sour cream and twirl it in a little bit of brown sugar.  Take a bite and take a sip of champagne. Then, sit back, put all thoughts of 2020 out of your mind, and think positive thoughts  for the new year.

So, what is King Cake? King cake is an oval or ring-shaped sweet yeast bread, sometimes containing a filling and typically decorated with vibrant purple, green, and gold sugar or icing. Here is my riff on this traditional, labor-intensive cake. My version does not have a filling (or a tiny plastic baby), but I think you will like it just the same.

Dissolve the yeast in the warm water. Stir in one teaspoon sugar and let stand until foamy (about five to ten minutes).

Knead the dough until smooth and springy, about five minutes. Add raisins and knead for one minute more. Place dough in an oiled bowl and turn to coat. Cover with plastic wrap and let rise in a warm, draft-free place until doubled in bulk, about two hours.

Divide the dough in half and shape each half into a 24-inch-long rope. Braid the two ropes together. As you braid, be sure that you are pulling the strands gently taut to make a neat and even braid; otherwise, your cake may bulge in some areas. Bring the ends together to form an oval, pinching the ends to seal.

Place on a parchment paper-lined baking sheet, seam side down. Cover with a towel and let rise at room temperature until nearly doubled in bulk, about 1 hour.

Brush the dough with the egg wash and bake until golden brown (about 25 to 30 minutes). Transfer to a wire rack to cool.

In a medium bowl, stir the confectioners’ sugar, optional butter or cream cheese, vanilla, and enough milk until smooth and of pouring consistency. Drizzle or spread the icing over the cake. Add colored sugar.

Tip: To make colored sugar, in a jar shake ¼ cup granulated sugar with four drops yellow, green, or purple food coloring.
Additional tip: Decorating a King Cake can be tricky and messy. I use a pastry brush to apply icing to one section, then sprinkle with sugar, let dry, and move on to the next section. 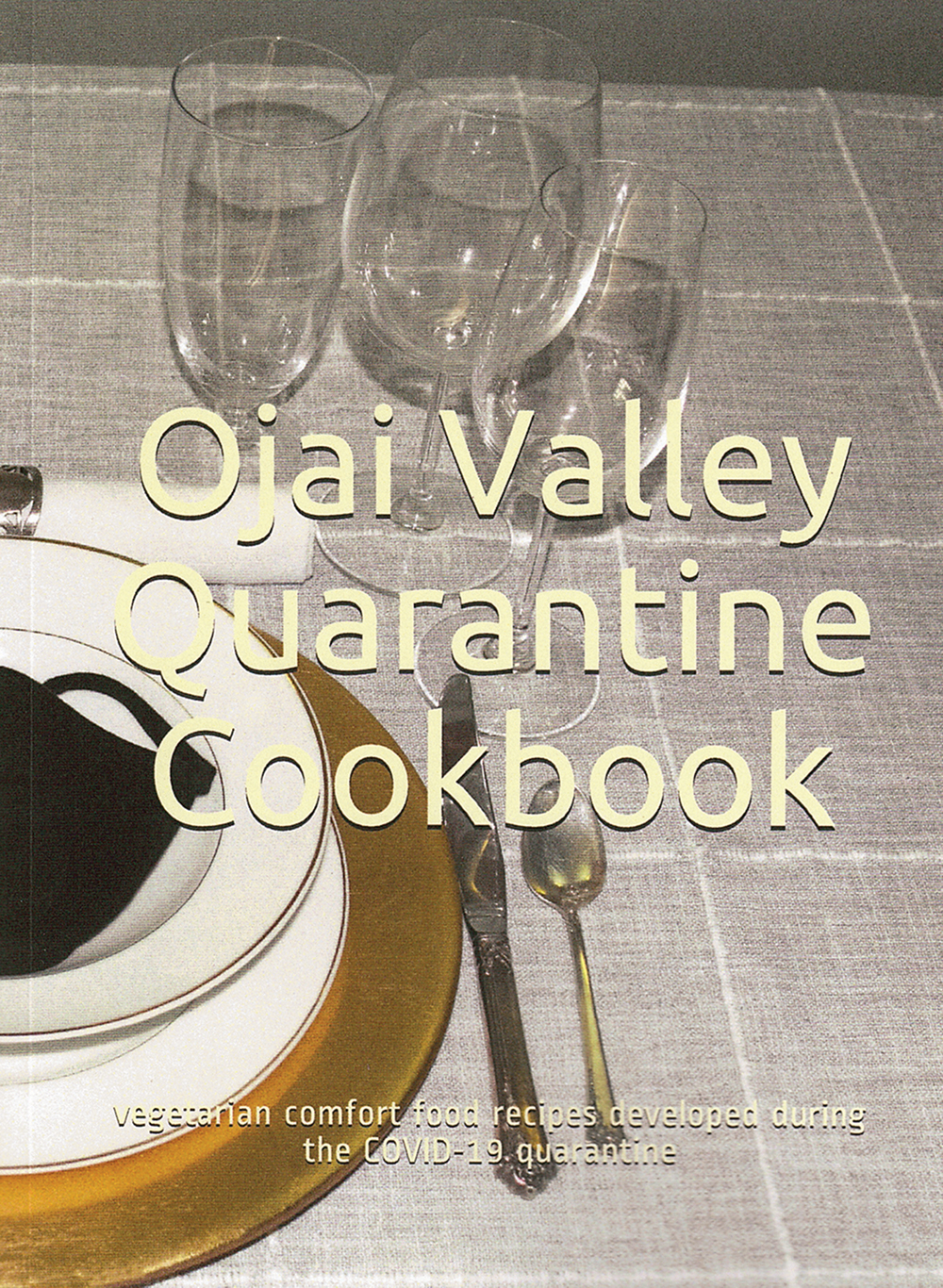 I have been going stir-crazy during the COVID-19 quarantine. So, I looked for something to keep me busy. Something to provide a creative outlet for my overactive mind. I began creating new vegetarian and vegan recipes at an alarming pace. Alarming because the refrigerator was overflowing with leftovers (good leftovers to be sure). The results of my stir-crazy efforts are included in this cookbook. Most of the recipes are comfort food, plain and simple, and seem fitting for the times.

You can find Ojai Valley Quarantine Cookbook on Amazon.com.

Randy Graham has been a vegetarian since August 1975 and eats fresh and local as much as possible. He enjoys cooking for friends and family using ingredients from backyard vegetable and herb gardens. He is known regionally as the “Healthy Chef,” and his food is often called vegetarian comfort food. He teaches at the Ojai Culinary School and his recipe column, Chef Randy, is syndicated in coastal California newspapers and magazines.

He, his wife Robin, and their dog Cooper, live in Ojai, California. Robin and Cooper are not vegetarians.