Olives and olive oil are extremely healthy. They are not only loaded with beneficial fatty acids and powerful antioxidants, but are also an integral part of the Mediterranean Diet — a way of eating based on the traditional cuisine of countries bordering the Mediterranean Sea.

While there is no single definition of the Mediterranean diet, it is typically high in vegetables, fruits, whole grains, beans, nut and seeds, and olive oil. The Mayo Clinic website says, “The Mediterranean Diet is one of the healthy eating plans recommended by the Dietary Guidelines for Americans to promote health and prevent chronic disease … It is also recognized by the World Health Organization as a healthy and sustainable dietary pattern and as an intangible cultural asset by the United National Educational, Scientific, and Cultural Organization.”

I like to cook with olive oil because it is a healthier alternative to butter. Its pungent yet smooth taste provides a great flavor profile in a wide variety of meals. I also like to use high-quality olive oil from a trusted olive oil company.

Need suggestions? See our story for some great local choices!

Need an excellent recipe? Read on! 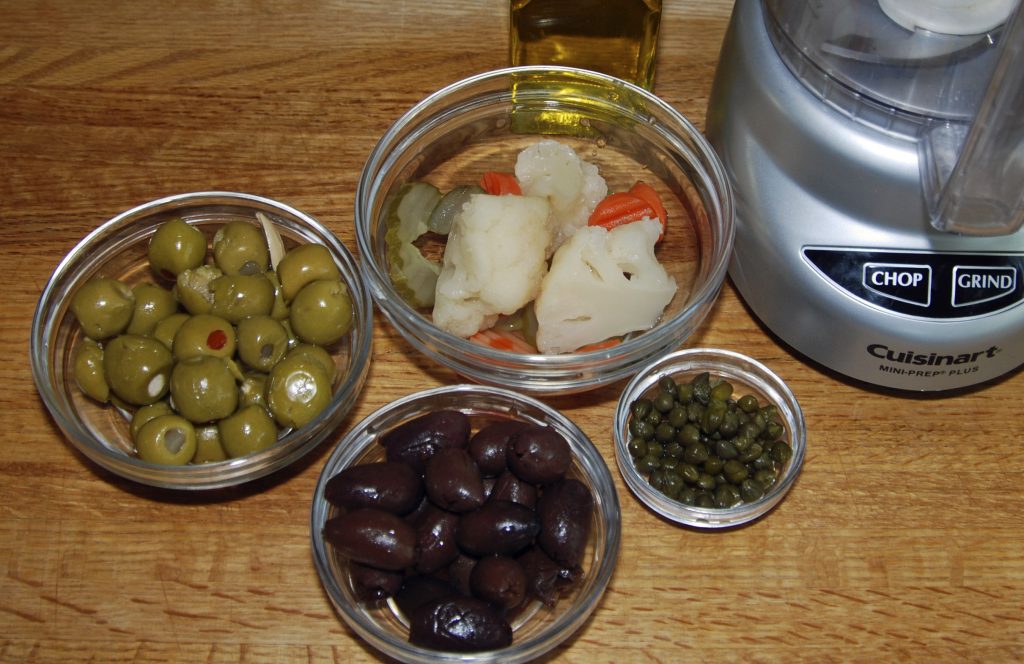 Tapenade is an olive-based spread common in Mediterranean cuisine. The traditional recipe involves only a few ingredients, including black olives, caper berries, olive oil, and anchovies ground together to make a thick, spreadable paste. The dish originated in the South of France, but is popular all over the world today, and comes in many different variations.

This is a simple yet flavorful vegan recipe. Use on bruschetta, as a topping for a scrumptious burger, or use on pizza instead of sauce. I even use it in place of salsa for quesadillas.

Directions:
Drain giardiniera and rinse with cold water to remove excess brine. This will help the tapenade from tasting too salty.
Using a food processor, combine giardiniera, garlic, capers, and olives and chop until you have a course chop. With the motor running, add olive oil in a constant stream. Puree until mixture forms a coarse paste. Cover and chill until ready to use. Tapenade will keep for up to a week in the refrigerator. 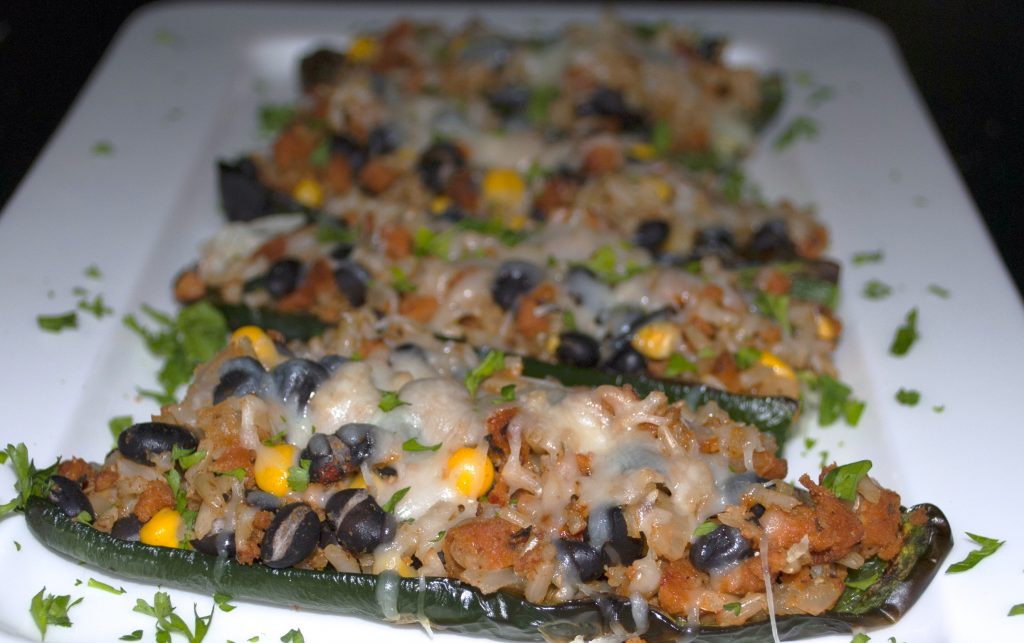 This is a tasty and colorful appetizer that doubles as a complementary side dish for almost any entrée. It’s that good. ‘Nuff said.

Directions:
Preheat oven to 375 degrees.
Cut peppers in half lengthwise. Remove seeds and ribs. Rinse and place on a baking sheet. Place the peppers in the center rack of an oven set on broil. Roast for four to five minutes on one side, turn over and roast for another five minutes. Remove from the oven and set aside.

While the peppers are roasting, chop two of the sausages into quarter-inch pieces. Measure out 1 and a half cups and set aside.
Heat the oil in a large skillet on medium-high heat. Add the onion and jalapeño and sauté for two minutes. Reduce heat to medium. Add the sausage, stir, and sauté until sausage is warmed, about six minutes more. Stir in rice, beans, and corn. Sprinkle in the seasonings (chili powder through salt and pepper) and stir well to combine. Remove from heat and set aside.

Place the cooked peppers on a baking sheet and mound the sausage mixture onto each pepper. Top liberally with shredded cheese. Bake for 20 minutes or until the cheese begins to brown.

To serve, sprinkle with green onions. You can also drizzle a creamy chipotle dressing over the top for extra taste. 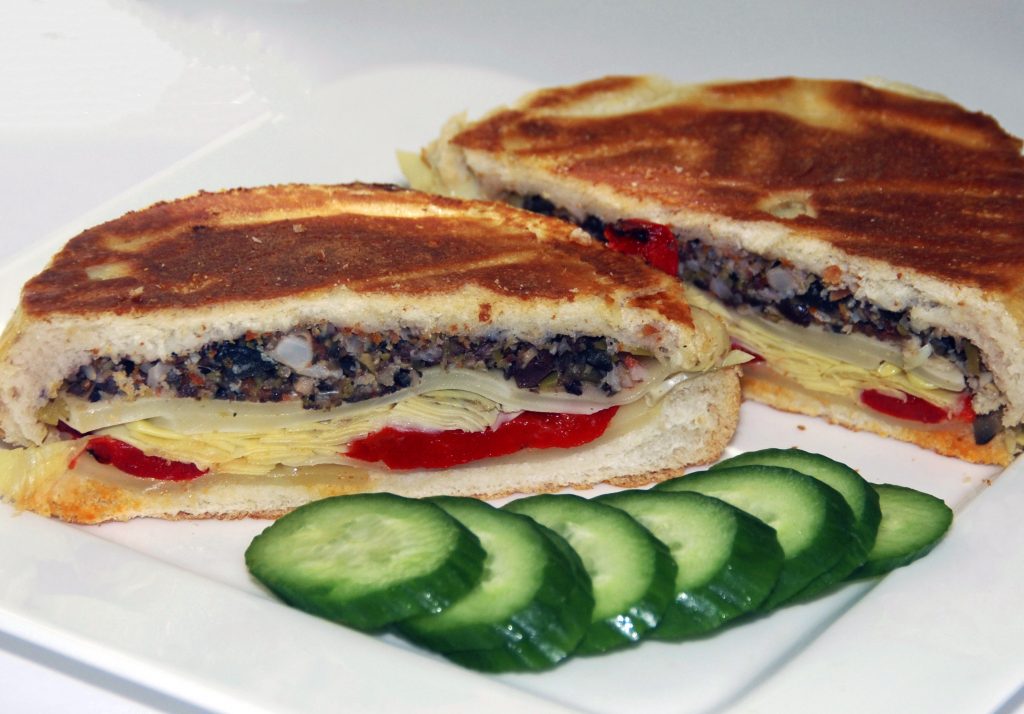 Remember the Panini sandwich craze of the 1990s? Millions of people bought electric Panini grills as either a gift for others or for their own use. I did both. Now that Robin and I have downsized, and do not have as much counter space as in the past, a Panini grill on the counter, sitting unused for most the year, doesn’t make much sense. But that doesn’t mean I don’t make Panini-style sandwiches!

Here’s how to make four tasty vegetarian Panini sandwiches without an expensive grill. They don’t have the distinctive “grill marks” of the traditional Panini sandwich, but the flavor and crunchy texture are there. Serve with a fresh green salad for a nutritious and filling lunch.

Directions:
Preheat a large pan, a griddle or grill to medium-high heat.

Place olives and giardiniera in a blender or food processor and pulse chop into a relish. Divide the relish among the four sandwich roll bottoms and top with a single slice of cheese, then artichoke slices and peppers, then top with another slice of provolone. Add pepper to taste. Press tops in place.

Place sandwiches on grill and press with heavy skillet weighted down with cans. Press a few minutes on each side. When sufficiently grilled, remove the sandwiches and cut in half. Serve hot off the grill! 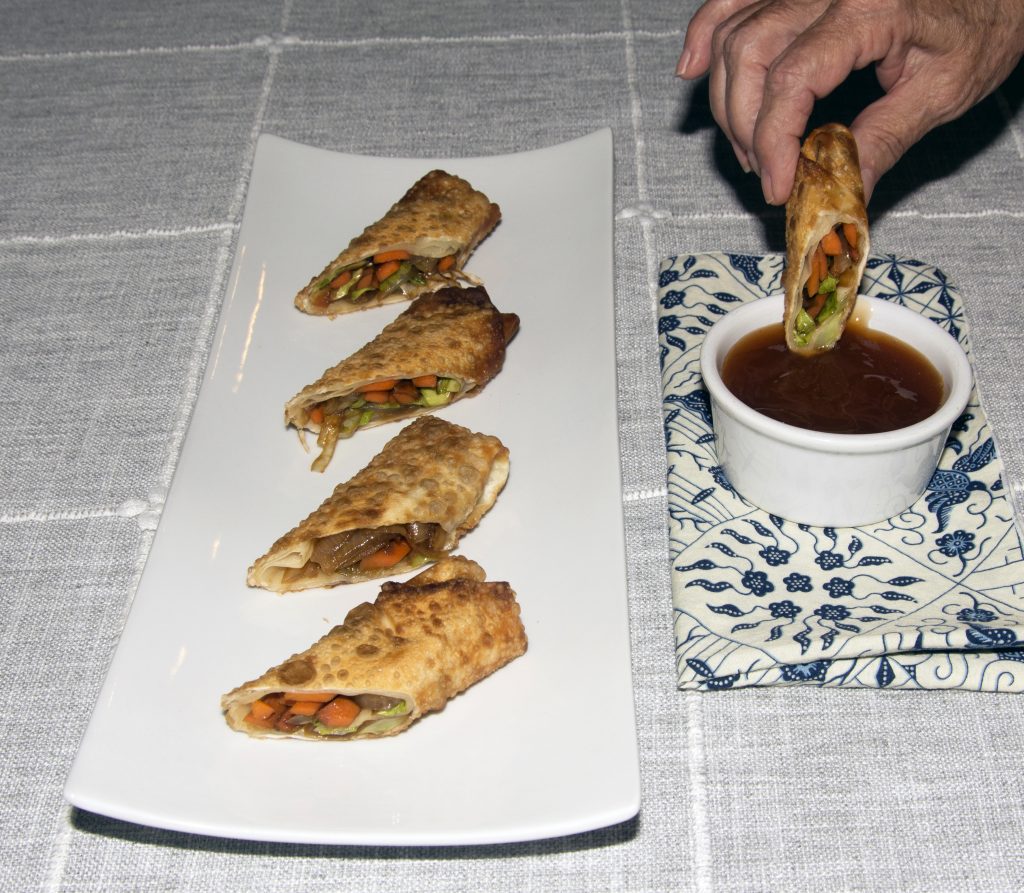 These vegan egg rolls are easy to prepare and explode with flavor when eaten. As an added bonus, the sweet and sour sauce is also vegan and ready for dipping in about ten minutes.

Egg Roll Directions:
Add olive oil to a large skillet and heat over medium-high heat. Add the garlic, onions, carrots, cabbage, ginger, and tamari sauce. Cook for about five minutes. Remove from heat, scoop into a serving bowl, and set aside. Wash the skillet for later use.

Place a wrapper on a cutting board and place two tablespoons of filling near one corner. Tightly roll the wrapper, fold over the left side, fold over the right side, brush a little water along the edge and close it up tightly. Do the same for the other five wrappers.

Add plenty of extra-virgin olive oil to the skillet and heat on medium-high heat. When it’s hot, add the egg rolls and cook for about 30 seconds on each side or until golden brown.

Remove rolls from the pan and place them on the cutting board. Cut them in half and bring them to the table on a large platter.

Sweet and Sour Sauce Directions:
Mix ketchup, tamari, vinegar, and agave syrup in a small mixing bowl. Dissolve the cornstarch in water. Stir into ketchup mixture.
Cook the mixture in a saucepan over high heat until it just begins to boil. Reduce heat to medium-low and cook until it thickens, stirring occasionally. Remove from heat so the sauce can cool to room temperature. Pour into small, individual dipping bowls and bring to the table along with the egg rolls. 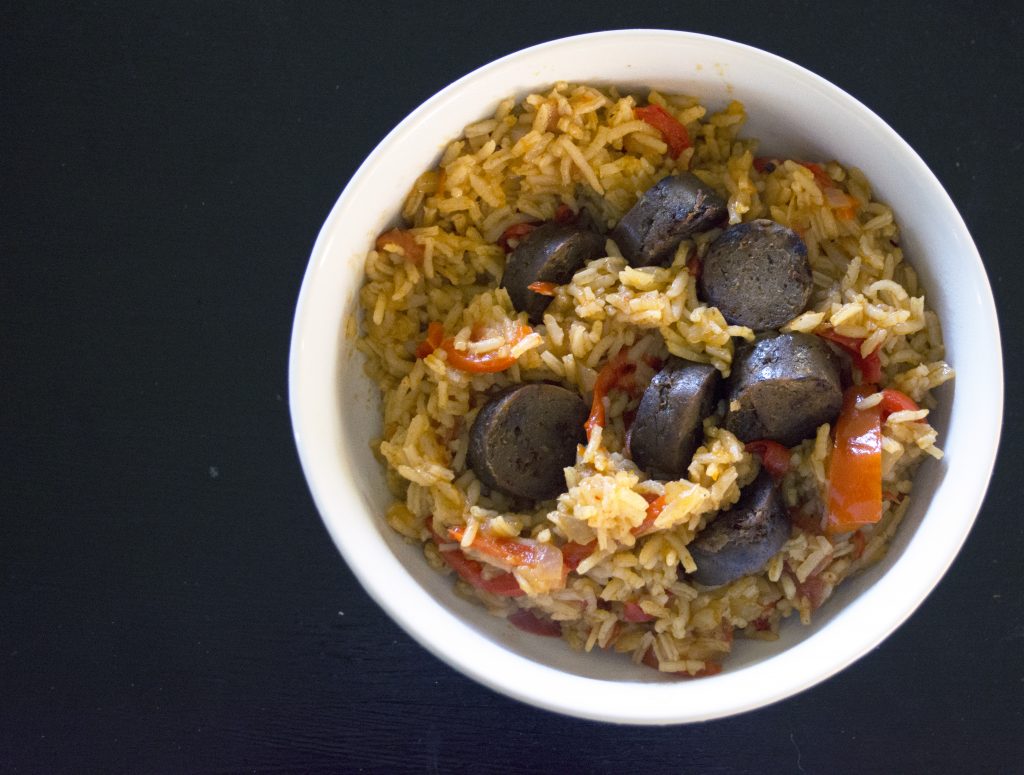 My friend asked me the other day if I had a recipe for Jollof. I told her that I had heard of it, but had never made any. I was intrigued and told her I would check it out.

So, what is Jollof? Jollof is a one-pot rice dish popular in many West African countries, including Ghana and Nigeria. If it has a North American equivalent, you could loosely say it is similar to jambalaya without the celery.

Spicy and colorful, Jollof is fun to bring to the table where it is sure to elicit oohs and aahs. My recipe includes slices of sausage. You can leave the sausage out, but the sausage turns a side dish into a hearty meal. I like to remove the seeds from the habanero pepper, but if you like super spicy rice, leave the seeds in!

Directions:
Using a nonstick pan, fry the sausage over medium-high heat for two minutes. Turn each slice over and continue frying for two minutes more. Cover, remove from heat and set aside.

Using a 4-quart saucepan, sauté the peppers and onions in the oil over medium-high heat for about five minutes, stirring frequently. Add garlic, salt, habanero pepper, tomatoes, and dry seasonings (thyme thru paprika) and cook for another ten minutes over medium heat, stirring on occasion. Add the tomato paste, cook for 60 seconds more.

Turn the heat off and allow the rice to steam, covered, for another 10 minutes. Keeping it covered while it cools improves the final taste and texture of the rice. Take off the cover and let the heat escape for five minutes. Fluff with a fork to separate the rice, slowly working inward from the edge of the pan in a swirling motion. Gently fold sausage into cooked rice and serve immediately.

Note: This recipe makes a generous amount for two and can be double

Randy Graham is a private chef, writer, and author. His Ojai Valley Cookbook series of books include vegetarian, vegan, and gluten-free recipes. The seventh and newest cookbook has soup and stew recipes created specifically for the Instant Pot. See Randy’s cookbooks on his website at Valley-Vegetarian.com.