Ojai has long been nicknamed Shangri-La. And it’s no wonder, with its beautiful surroundings and relaxed vibe. People vacation here to get away from it all, to escape from the chaos of the city.

But even though Ojai is a small community, it’s actually pretty close to just about everything you could ever want to do — whether that’s Rodeo Drive or rural drives, Big Sur or Little China.

That’s why, this week, we’re talking proximity. Here are some of my favorite day-trips (by foot, bike, and by car) that you can take right from your doorstep in the Ojai Valley.

We’re surrounded! No matter where you are in Ojai, you’re almost certainly within walking distance of killer valley views.

One of my favorite things to do as a kid was to walk straight up Ayers Avenue from my grandmother’s house and “blaze a trail” up to Shelf Road with the neighborhood kids. Sadly, I don’t think you can do that these days, but it’s still an easy walk to the trailhead on Gridley Road to the east or Signal Street to the west.

And with Los Padres National Forest bordering Ojai on three sides, I recommend stopping by the Ranger Station at 1190 E. Ojai Ave, or the Wheeler Gorge Visitor Center 8 miles north of Ojai on Maricopa Highway, to find out how you can get the most of the area. They can help you with Adventure Passes and share information about how to get to some of the best views in the valley: up to the old Nordhoff Ridge lookout, or even to the top of the Topa Topa Mountains, of Pink Moment fame.

You can also check out the Ojai Valley Land Conservancy website ovlc.org, for a list of the many other mountain trails around the valley.

Into rock climbing? A 30-minute drive up Highway 33 (also known as Maricopa Highway) will take you to the Sespe Wall. You can’t miss the sheer rockface on the west side of the highway just a few miles past Rose Valley Road. The world-class climbing spot is known for both its technical and novice routes. Newbies — even youngsters — can make their first-ever ascent here with the right equipment and a good teacher. (Lucky for you, we happen to know a good teacher, Ojai’s own Alex Bury. Find out more at ojairockclimbing.com.)

If bouldering is more your thing, check out Mount Pinos and Reyes Peak Campground. Each lies about 45 minutes to an hour past the Sespe Wall, and offers the added convenience of being situated in or within walking distance of campgrounds. 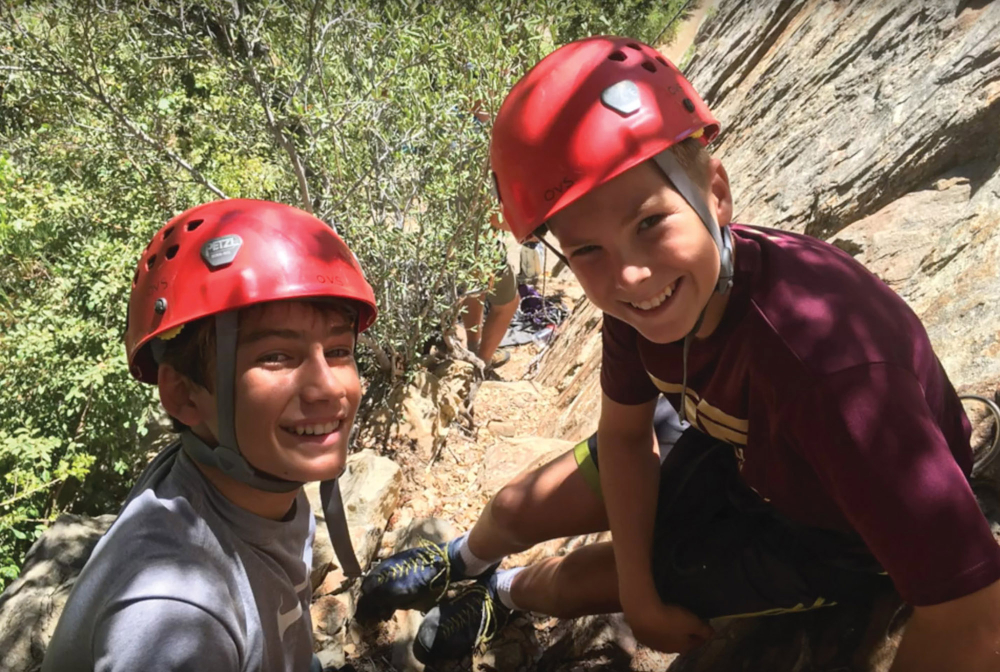 Each year Ojai Valley School takes students in middle and high school to the Sespe Wall. For many of them, it’s their first time climbing, but this spot close to home is renowned for both its variety of routes and its proximity to Ojai.

Ninety minutes from Ojai — and also up Hwy. 33 near Cuyama — is the Carrizo Plain National Monument. I’ll fill you in on this incredible spot in a future column, but here you’ll find amazing geology (you can actually see where the San Andreas Fault ripped the earth apart), rich Chumash Native American history, foxes, elk, kangaroo rats, and some great off-road trails. In the springtime, you’ll find uninterrupted miles of wildflower blooms.

I realize we’re just a week into autumn right now, but keep Highway 33 in the back of your mind for winter; you can have some pretty serious snowball fights about an hour from Ojai after a decent rainstorm in town. There’s a popular, highly accessible spot near the Pine Mountain/Reyes Peak turn-off with perfect little sledding hills right off the side of the road.

And if you want to get really crazy, drive back down the hill after your snowball fight and hit the beach. Talk about California dreaming! Most of the valley lies within about a 30-minute drive from the Pacific. Or, you can take a leisurely bike ride down the Ojai Valley Trail and it still won’t take you more than an hour to reach the sand. 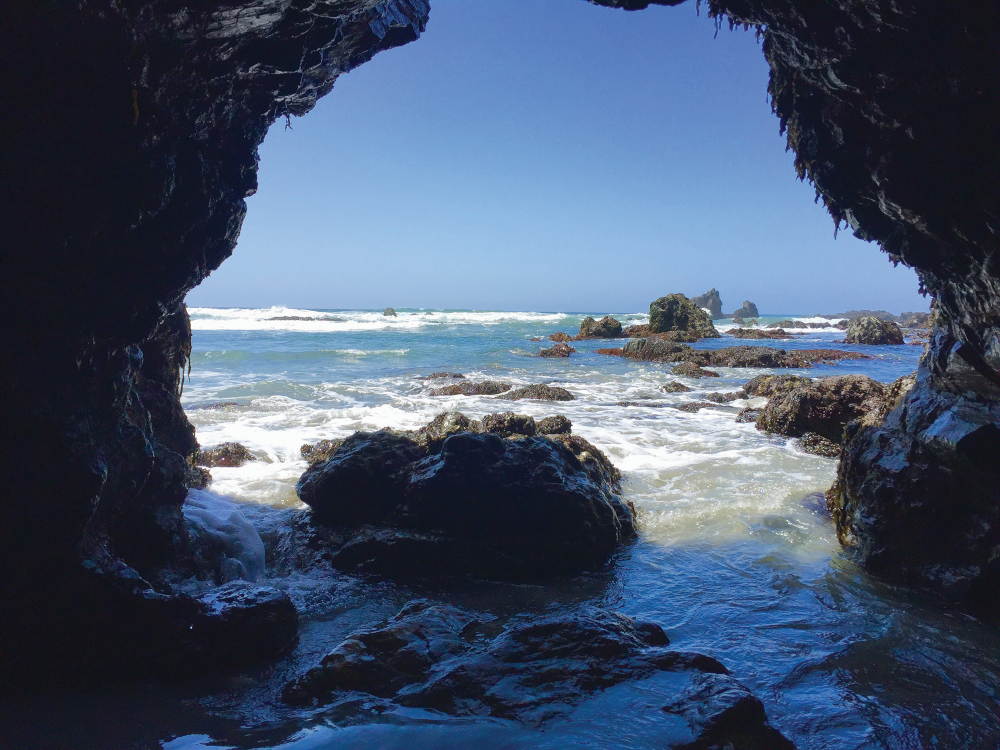 Step back in time and witness untamed California up close and personal along Highway 1.

The beaches of Oxnard, Ventura, Carpinteria, and Santa Barbara offer something L.A. beaches just can’t anymore: a quiet spot to lay your towel. Sure, every beach is crazy-busy on weekends and most days during the summer. (It’s California, what do you expect?) But there’s just … more room to breathe around here.

In Oxnard, Silverstrand cuts a broad swath on either side of the Channel Islands Harbor. During late afternoons as a kid, my mom often took me to the nearby corner store for Sidewalk Sundaes, then we’d walk down the jetty and wait for my dad’s sportfishing/scuba diving boat to come into the harbor. Even when it  was super windy, it was still great fun to watch the guys with trick kites get dragged down the beach.

When my dad moved his boat to the Ventura Harbor, we had similar adventures. More of a tourist spot than Channel Islands Harbor, it boasts a bunch of cute shops, awesome restaurants, and the Channel Islands Visitor Center. Once my dad (aka Captain Tony) pulled his scuba diving boat into the dock, my little brother and I would take off to Coastal Cone and buy absurdly large ice creams. Then it was off to the Village Carousel and Arcade, where we played skee-ball and Pac-Man, rode the carousel, and crammed into the photo booth to take selfies 20 years before the term was coined.

Grownups will enjoy a variety of dining options, from The Greek Restaurant to Brophy Brothers, and the Ventura Harbor Comedy Club, a great place for a few drinks and laughs as up-and-coming comedians hit the stage.

You can also rent stand-up paddle boards, paddle boats, kayaks and other boats right there in the harbor. And my dad might not forgive me if I didn’t mention there are sight-seeing, sportfishing, and scuba diving boats all within the harbor as well. A 90-minute ride with Island Packers (islandpackers.com) will get you out to the nearest Channel Islands, Anacapa and Santa Cruz, for an educational tour of what some call “America’s Galapagos.” Check out all the fishing and diving boats (my dad’s is The Explorer) at venturaharbor.com/list/dive-fish-boats.

A few minutes north, and a few minutes closer to Ojai, is the Ventura Pier and San Buenaventura State Beach. Long and wide-open, the strip includes a few sand volleyball courts and a sweet little playground. Grab some fish tacos on the Pier and take a stroll to the end of the wooden structure, then head north along the paved Promenade to our next spot: Surfer’s Point. Guess what they do there? Excellent surfing in the traditional sense, yes, but also wind and kite surfing. Even if it’s a little too windy to enjoy the waves yourself, park in the long lot, watch and wait. The spectacle of kite surfers flying through the air and wind surfers speeding along in the chop is quality entertainment.

Just north of where Highway 33 meets Highway 1O1, you’ll find the exit marked State Beaches. Take it. You’ll find a roughly 6-mile stretch of beach, interrupted by a few gated communities and public campgrounds. But mostly, you’ll find beaches like Emma Wood, Mondo’s, Faria, and Hobson. I learned to surf at Mondo’s. The gentle waves are a great place to stand up for the first time. It can get a little crowded sometimes, so if that’s not your scene, keep driving; there’s plenty of space for everyone. 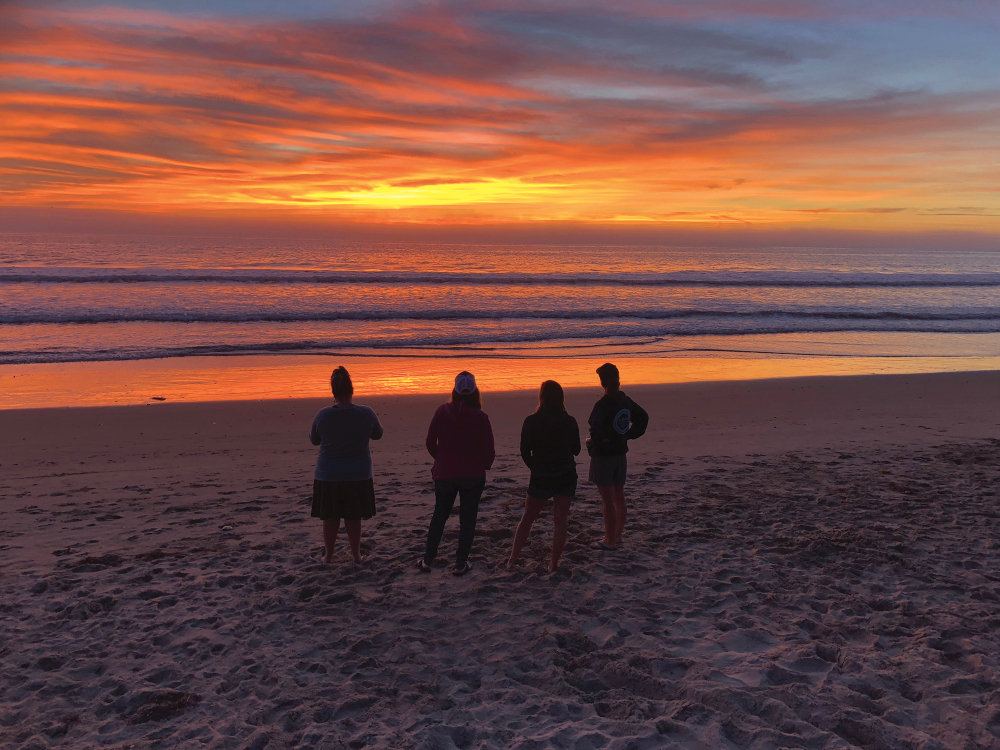 Autumn brings some of the year’s best sunsets. They’re as grand from your front door in Ojai as they are at the beaches, just 30 minutes away.

Still not finding what you’re looking for? Jump back on the 1O1 and you can easily access Rincon, Bates, and Carpinteria beaches. The town of Carpinteria itself is worth exploring; it is a classic California beach town, and if you’re a fan of microbreweries, Rincon and Island breweries are within walking distance of the beach. A little further up the road is Santa Claus Lane, a name that is admittedly misleading but that contains one of my favorite places to grab a bite: Padaro Beach Grill. Amazing burgers and fries and a sprawling lawn with beach views make it a fun and tasty experience.

By this time we’re about a 40-minute drive north of Ojai. A few more minutes will bring you to Santa Barbara, which is similar to Ojai, only on the beach and a bit larger. Here, you can walk from the zoo to East Beach within moments, or jump on the cute little trolley and roam Stearns Wharf (which contains the awesome Sea Center!) and/or downtown’s State Street, and/or The Funk Zone, where craft cocktails and devastatingly-hip décor make it a hot spot for the UCSB college crowd.

And all of this with an ocean breeze.

I grew up running around the hills of Ojai, but I knew all about L.A. because of two things: Disneyland and Dodger Stadium. Mouse ears and Dodger Dogs were coveted treasures, and although I didn’t know it as a kid, most of L.A. is less than a two-hour drive from the Ojai Valley. You can get to almost everything the informal capitol of SoCal has to offer in about the same amount of time it takes to watch “Die Hard.” 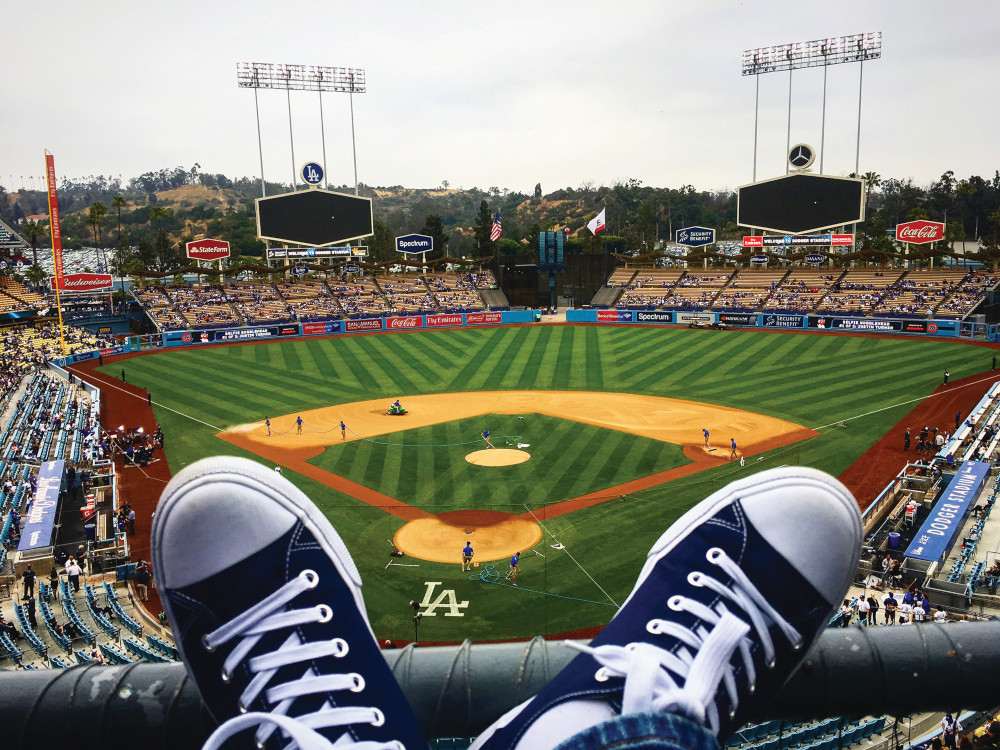 They call Disneyland the “Happiest Place on Earth,” but maybe they’ve never been to Dodger Stadium. It’s less than 90 minutes from Ojai.

There’s a reason Angelenos often buy homes in Ojai; come up for the weekend, then hop back on the 1O1 to Hollywood on Monday morning. And perhaps it’s that convenience that has imbued Ojai with subtle hints of Los Angeles over the years — like the endlessly hip Caravan Outpost, with its Airstream trailers as accommodations; Revel, the kombucha bar and tasting room featuring locally-made jun kombucha (known as the champagne of kombuchas); and the organic, gluten/sugar/soy/GMO-free restaurant Food Harmonics Ojai.

For those willing to go a bit further and brave the dreaded 405 freeway, San Diego is only about 5 hours south, even in heavy traffic. Or, head east for about the same amount of time and you’ll find yourself in Las Vegas. Sin City can also be accessed through flights out of Santa Barbara (but then you wouldn’t get to drive past by the oddly-named Zzyzx Road on Interstate 15!).

I’m not trying to reach for patterns here, but also about 5 hours from Ojai — to the northeast this time — you’ll find the exact opposite of Las Vegas: wide-open spaces, surrounded by 10,000-plus foot peaks known as the Sierra Nevada. Fishermen, backpackers, skiers, snowboarders, explorers, and nature-lovers consider the area paradise. With its high deserts, natural hot springs, ghost towns, 4,000-year-old trees and trout-stocked streams, what’s not to love? Combined with their proximity to Yosemite, the Sierras are more than worth checking off your bucket list. 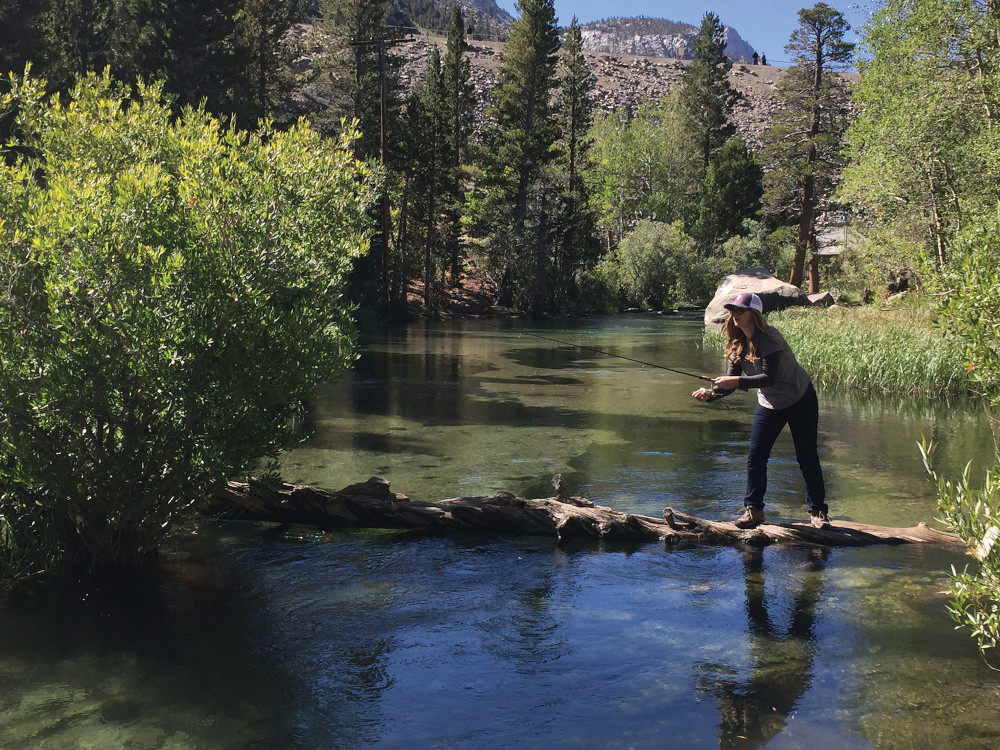 Each year Ojai Valley School takes students in middle and high school to the Sespe Wall. For many of them, it’s their first time climbing, but this spot close to home is renowned for both its variety of routes and its proximity to Ojai.

If you’re looking for even more adventure in a rural setting, try Highway 1. Also known as Pacific Coast Highway, it’s accessible from Ventura off the 1O1 and spans from Orange County to Mendocino County.
My favorite stretch runs from Morro Bay (2.5 hours from Ojai) to Carmel-by-the-Sea (4.5 hours away), where Hwy. 1 carves a winding path between jagged coastlines and undulating mountains. If it weren’t for the asphalt and sporadic towns, you might feel like you’ve gone back in time to the earliest days of California’s geologic history.