Outrigger canoeing off the Central Coast

The first time I saw an outrigger canoe was on vacation on Oahu in 2010. It was the 4th of July, and it also happened to be the day of the annual Walter J. Macfarlane Memorial Canoe Regatta — the oldest annual outrigger canoe race in the world, getting its start in 1943. Hundreds of canoes lined the beach. The race had finished earlier that morning, and the paddlers were now enjoying cold beers and celebrating their finishes. 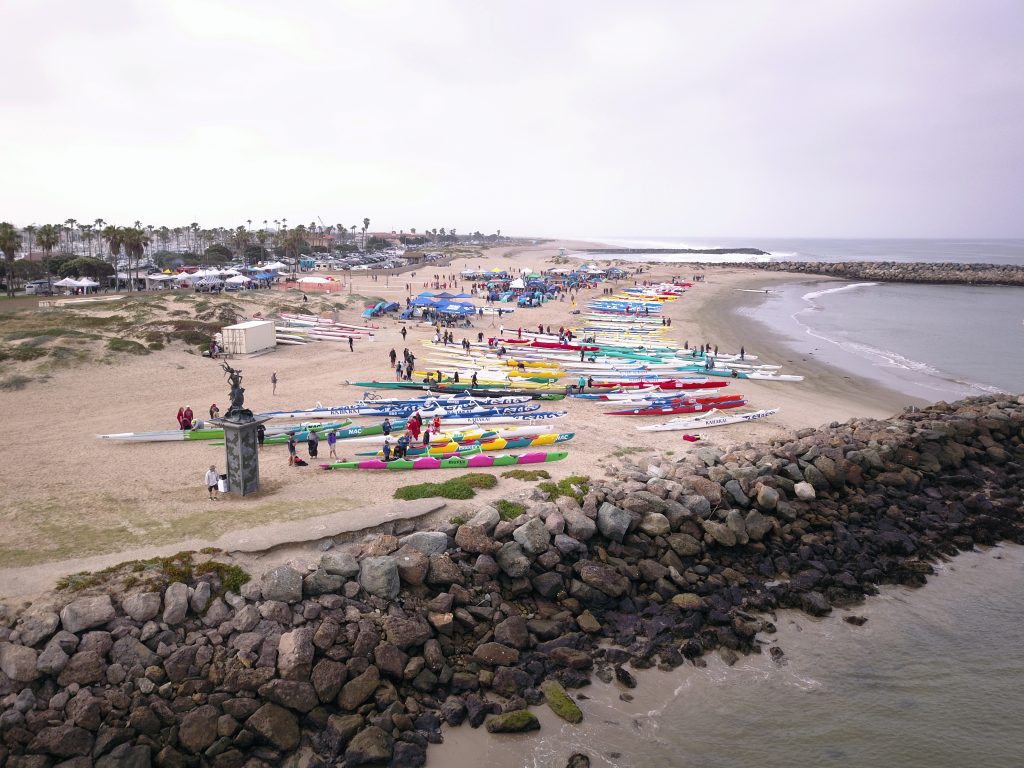 I was fascinated by the boats, the camaraderie, the overall vibe of the group. I’ve always loved the Hawaiian culture, and this just solidified it. I woke up early every morning for the rest of that trip so I could watch the boats glide across the water with what looked like such ease.
I learned years later, off the coast of Ventura County, just what it takes to move those 400 pound boats so gracefully. 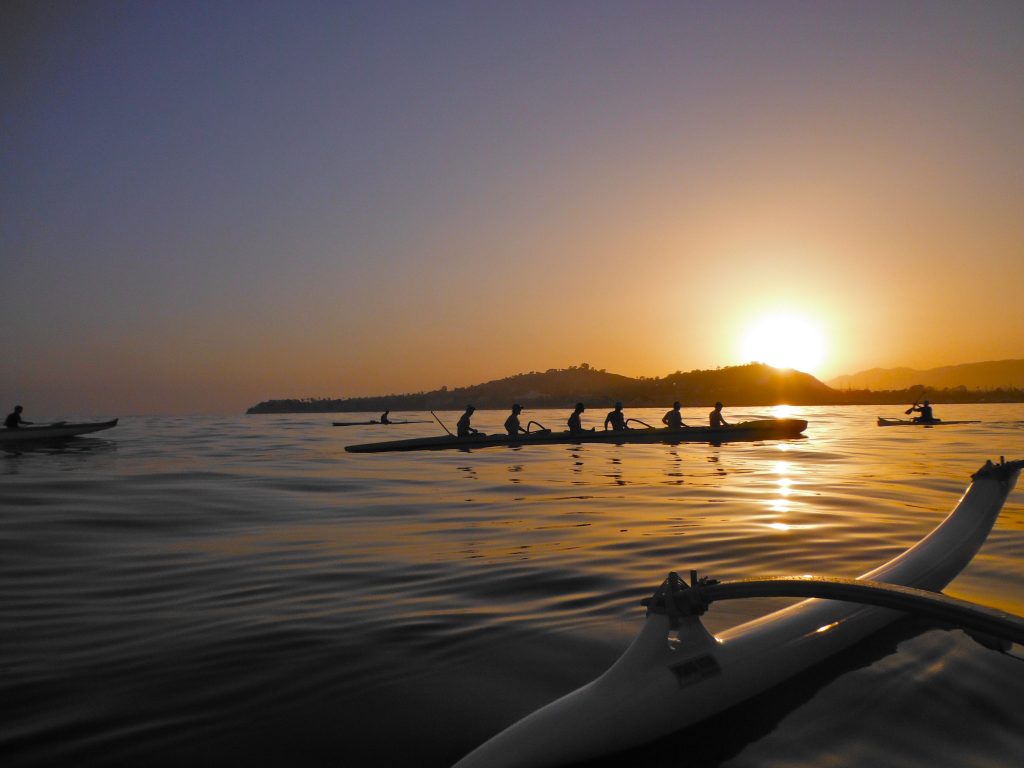 Outrigger boats date back to 200 AD, and were originally developed for sea travel. Most outrigger canoe racing can be traced back to the Polynesian cultures of Tahiti and Hawaii. The sport, called hei hei wa’a, was practiced among Hawaiian chiefs, and bets were placed on the outcome. Traditionally outrigger canoe racing took place in a canoe with six paddlers (OC-6 or six man canoes). It was in the early 1990s that kayak builder John Martin of Hawaiian Designs built a rough water one man outrigger canoe (OC-1). My former coach, Roy Ervin, happened to be getting ready for an OC-1 race in Kailua Kona when I reached out to him for a quote. “The energy here is overwhelming with true Aloha Ohana. People come right up to you and greet you like they haven’t seen you for awhile.”

This “ohana,” a Hawaiian term meaning “family,” is exactly what sets Outrigger Paddling apart from other sports. “Looking to my 11th year of racing, it has brought me to a point where I look beyond the season and more to what touches my spirit. To be on the water, gliding effortlessly along on my one man canoe (OC-1).To be on the water and looking back on the land is a reminder that perhaps some of us belong more on the water. To be in the pure moment of connecting without forward thought, but to feel that exact peace with every paddle stroke.” 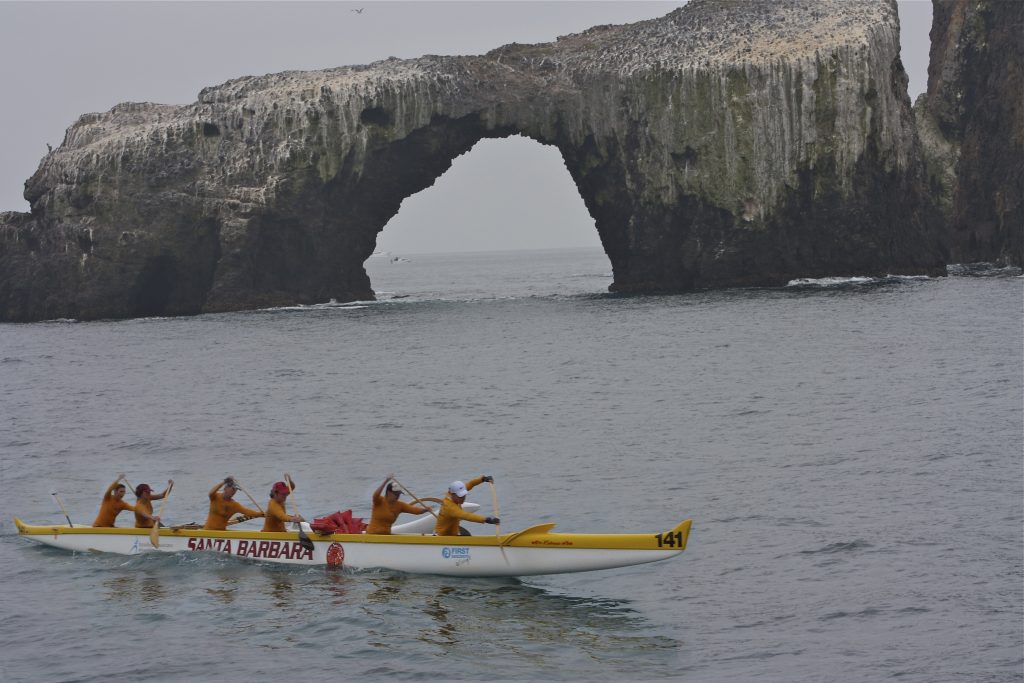 I signed up on Facebook for a Hokuloa Outrigger Open House in April 2016. I didn’t think much of it (my main concern was that it was so early on a Saturday – why?!). But man, were my assumptions wrong. I showed up to the Open House at Ventura Harbor and was immediately greeted by several people on the beach. There were two outrigger canoes on shore. I had no idea how big they actually were until I was standing next to one. An outrigger canoe is 45 feet long, generally made of fiberglass, and more than 400 pounds. I chatted with the Novice Coach for a few minutes, letting him know that I have a background in water polo and swimming, and have a love for the water in general. He tried to get me in a boat that morning to try it out. I declined, saying I’d come back the next morning for the 9 a.m. paddle. I had to mentally prepare for this!

In the power seat

The next morning was clear and sunny. I arrived at the beach a bit before 9. They gathered us newbies, explained a bit about what to expect, handed us paddles, and put us in the seats they thought we’d be best in. There is so much more to paddling than you’d think — seat placement being super important. I sat in Seat 4, which made me a little nervous. Seats 3 and 4 are often referred to as the “engine room” or “power seats.” The heavier, stronger paddlers take these seats and are responsible for providing the power required to get and keep the canoe moving. 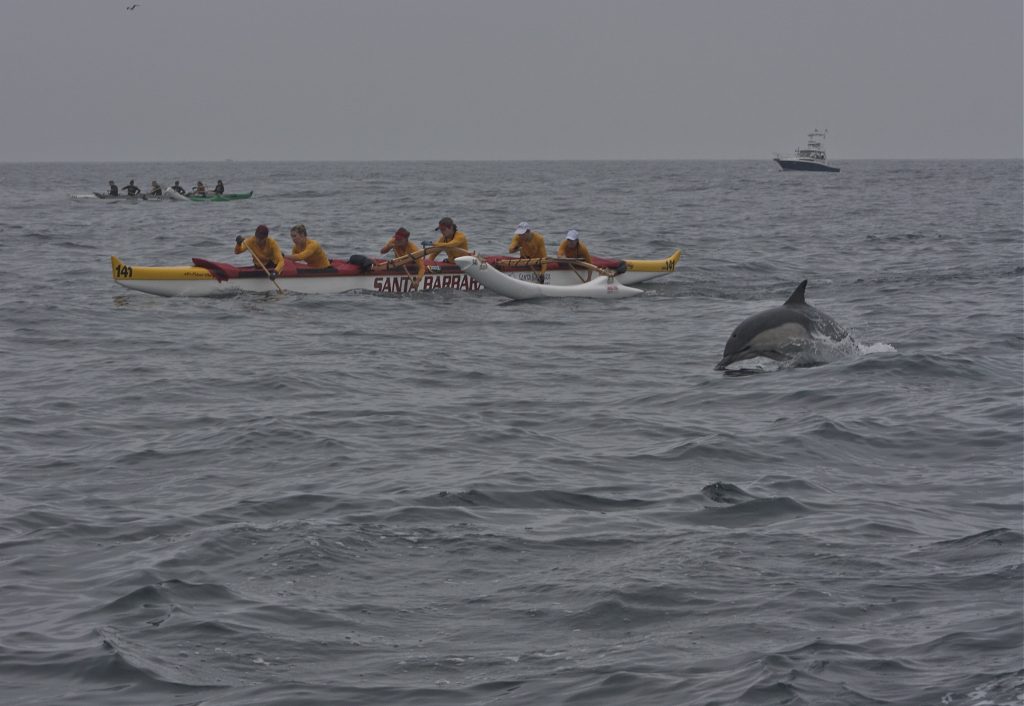 I won’t bore you with the details of that first grueling 4 mile paddle — which I laugh at now, considering that by the end of the season our team was participating in 20 mile races. I will tell you that after that, I was one thousand percent hooked on outrigger paddling (even if I did start by holding my paddle backwards).

Paddling quickly became a way of life. Practices were three times a week — two weekday evenings and 8 a.m. Saturday practices. I was working a full time job that was somewhat intense, and paddling was my outlet.

Once you’re in the boat, that’s all you focus on. The movement of your paddle. The placement of your feet. Synchronization with the other paddlers in your boat. If one person is off, the whole boat is off. Finding that rhythm is sometimes elusive, but when it hits? That boat gliding across the water when everyone is in sync is almost magical. You get in this groove, and you’re going, and sometimes it is ROUGH. You’re exhausted. The sun is beating down on you. Salt water is spraying your face. You’re on mile 10. But you bear down, find that strength, and keep going. And when you get back to shore, and realize you just helped move a 400 pound boat 10, 15, TWENTY miles? MAN. That feeling carries over into your daily life. Paddling forces you out of your comfort zone, and helps you realize that you actually can do those things you didn’t think you could do.

A way of life

I quickly realized paddling is not just a sport. It’s a way of life. It becomes ingrained in you. Danielle Diaz-Peters, a teammate of mine, says it perfectly:  “I started paddling for the forced workout — once you’re in the boat there is no stopping until the boat returns. After the first day I fell in love … I found being on the water brought my mind, body and spirit peace. I was fortunate to be blessed with a novice coach who not only taught us how to paddle, but the spirit of the sport, the history, the definition of Ohana. He taught us there aren’t 6 people in the canoe, there are 7. When together on the water the canoe and its crew become one. The people you paddle with not only become friends, but life long Ohana that are forever  connected and reunited the moment you touch the water.” 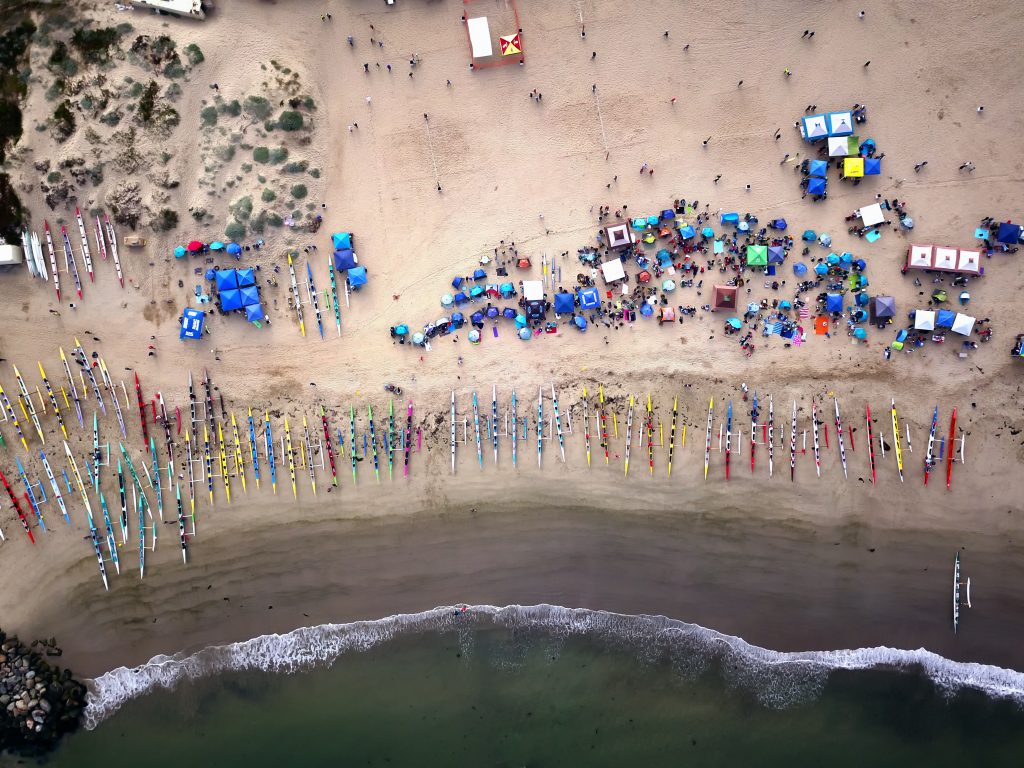 Diana Ovadia, another Hokuloa teammate, has a similar story. Paddling off the Ventura coast with Hokolua, she said, “became church to me — I wasn’t right if I didn’t get on the water with my ohana … The sport pushed me, fed my competitive appetite, and gave me a renewed sense of self. The people made me laugh and became my closest friends. It’s still the highlight of my life and I look forward to my kids growing up on the water with me.”

Join the club (or the spectators)

Joining an outrigger club is a great way to start your paddling journey, and many clubs offer adult and keiki (children’s) teams. There are several clubs along the Central Coast (see below). Race season is May through September, and official practices usually start around February or March. 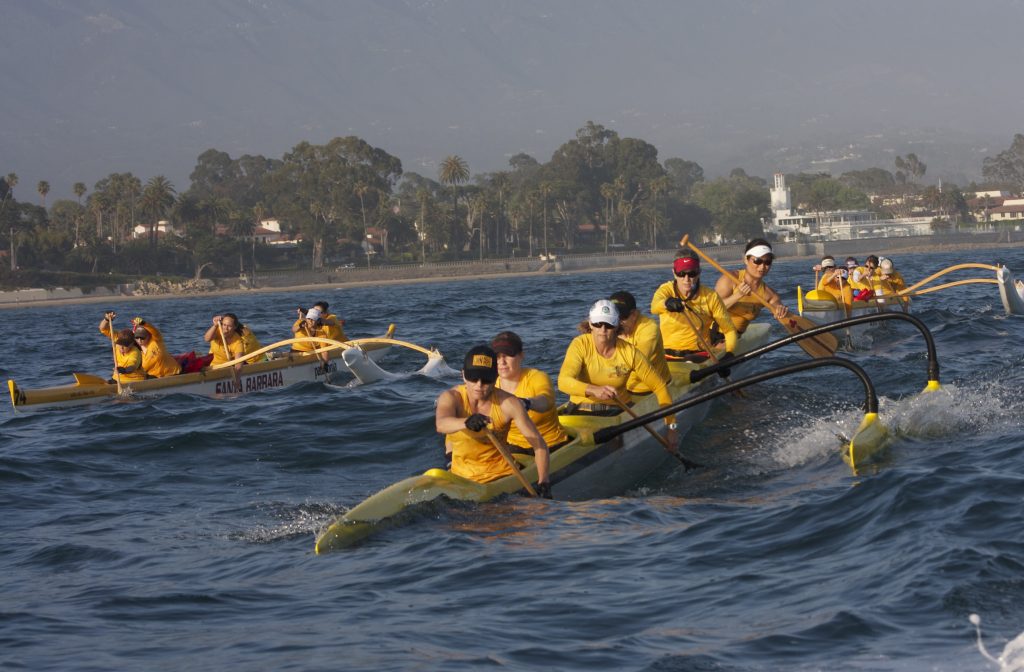 Not so sure you’re ready to hop in a boat? Races are actually really exciting to watch! They’re open to the public, and are fun for all ages. Make a beach day of it, and enjoy the food, retail vendors, silent auctions, beer gardens, music, and more. It all helps offset the costs to the clubs (after all, outrigger canoes can cost upwards of $20,000 each). You’ll also get a chance to check out the boats and chat with the paddlers.

But the best part? Standing on the shoreline, cheering on the boats as the sprint toward the finish line.
Most race days begin around 8 a.m., but be sure to check club websites for details.

Upcoming Races on the Central Coast

• May 16: Ka Nai’a Outrigger Canoe Club’s Rig Run in Santa Barbara. Race takes place on the beach just off Cabrillo Boulevard, across from Santa Barbara City College. Two races — one four miles, the other 10 to 12 miles — take paddlers out toward the oil rigs that dot the coastline. Afterward, head to nearby Stearns Wharf for fantastic eats and stunning views, as well as the awesome Sea Center, where you can touch sharks and get up close and personal with moon jellies! 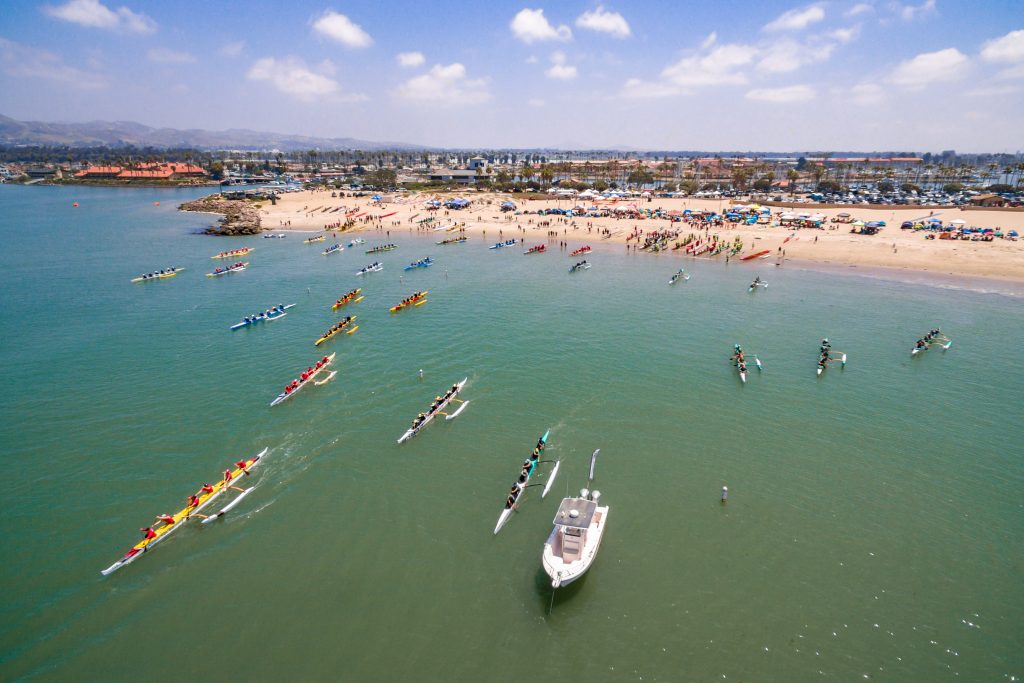 • June 6: Hokuloa Outrigger Canoe Club’s Ventura Outrigger Challenge, in Ventura. Race takes place at Harbor Cove on Spinnaker Drive, at the mouth of the Ventura Harbor. Teams from across the state convene on this normally-quiet little beach, making a 10-mile loop out toward the gorgeous Channel Islands National Park. When you’re done racing (or spectating) spend the evening across the street in the Ventura Harbor, with its many shops and restaurants.

Several other races are scheduled throughout Southern California this summer, including a race from Newport Beach to Catalina Island; visit www.scora.org/race-schedule for dates and more.