My husband is a barbecue master. He’s got several sizes and varieties of barbecues and smokers, each with its own specific (magical) purpose. So when we signed up to make a meal for the Ojai Valley Family Shelter last year, I requested that he make my favorite meal: pulled pork sandwiches. A slow smoked (15-plus hours!) pork shoulder cooked to fall-apart perfection, shredded on a Hawaiian-style bun, with all the fixings. Yesss! We knew it would be a fantastic meal for our OVFS guests, and a great bonding opportunity for our family, too.

What I didn’t really realize was the kind of impact this experience would have on us. Because these weren’t just locals who had fallen on rough times and needed a helping hand. They are our neighbors. And the people who were volunteering alongside us are our neighbors, too. 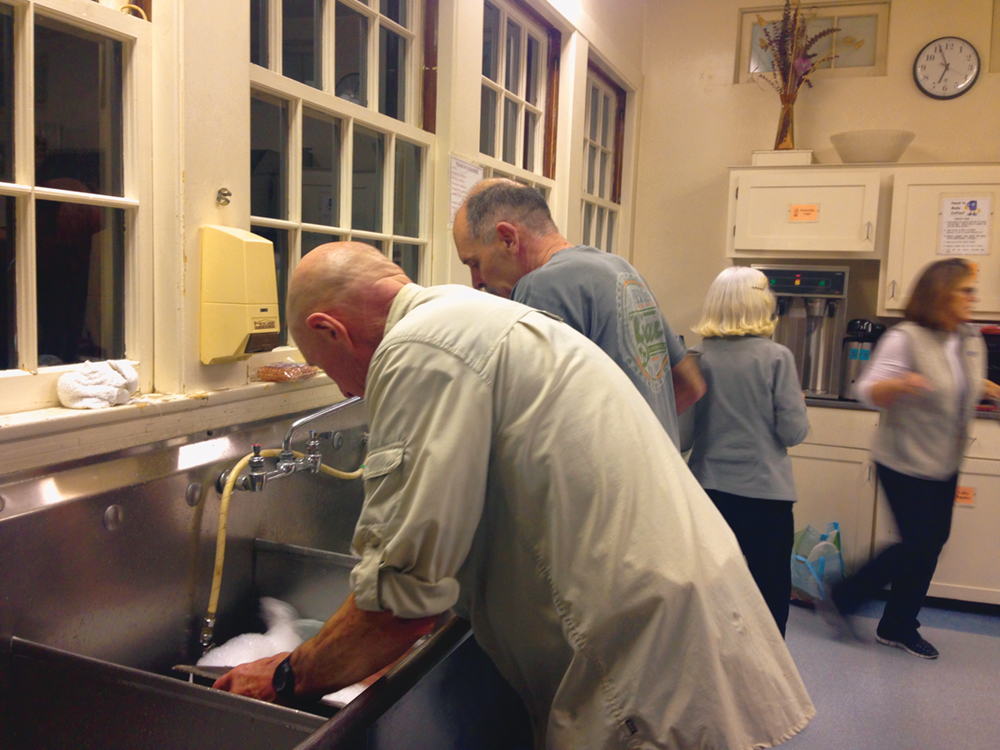 Volunteers are always needed and welcome at the Ojai Valley Family Shelter.

I realized that, in the truest sense, this is what community looks like. Here in Ojai, we still help each other, and we’re all better because of it. As I’ve said in this column before, the people are a huge reason why I love living here.

As shelter president Martha Ditchfield puts it, “They might be houseless, but they are still a part of Ojai. Many of them have lived here their entire lives, and they love Ojai as much as everybody else … Ojai is a special place, and those who’ve spent most of their lives here really see that and they appreciate it. They want to stay here like the rest of us.” 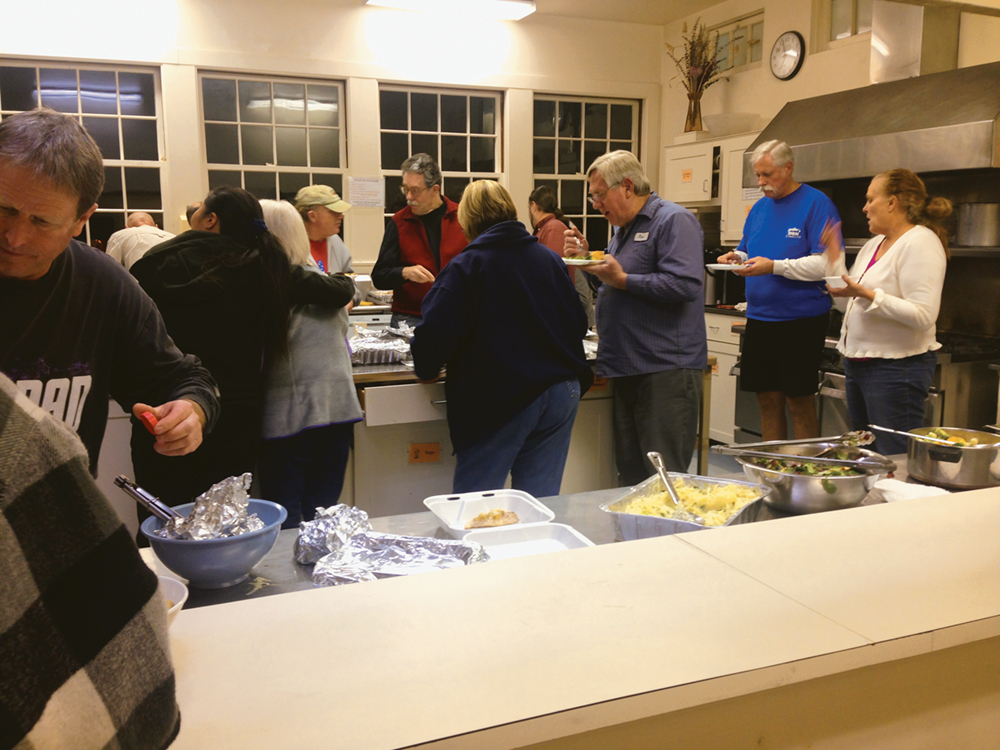 The OVFS was founded almost three decades ago by a small group of churches who decided to open their doors during the coldest months of the year for those who had no place else to go. At first, just a handful of people showed up each night. But the need has definitely grown over the years.

If you Google “One month away from homelessness,” you’ll find a slew of articles and studies showing that about 40 percent of Americans — more, in areas like Southern California — are one illness, one unanticipated expense, one monthly rent increase, away from losing their housing.

“We’re seeing more families, and more women. There are more people who don’t want this lifestyle, who are being forced into it,” Martha says. “The homeless in Ojai aren’t the people you see in the park and on the street … a lot of them have jobs, and cars. It’s the housing crisis. They just can’t afford it.”

And that’s where the OVFS comes in. From the beginning of December through the end of March, volunteers come together to provide food, shelter, and showers for those who need them. All they ask is that guests be Ojai locals, remain peaceful, and have proof of a negative tuberculosis test.

“They’re our guests, not our clients,” says Martha. “For me, my church is home. So they’re in my home, and they’re treated like guests.”

The shelter rotates to different locations during the week, but the basic services remain the same. The doors open at 6 p.m. for check-in and snacks. “We do snacks because, for some of these folks, it’s the first time they’ve eaten all day,” Martha notes. Sometimes there are also donations of things like new pairs of socks — a small but powerful (and useful) gift for those with so little. Guests also receive a pillow, blankets, and fresh sheets to make up their beds. The converted shower trailer is open at this time for anyone who would like one. Dinner is served between 7 and 7:30 p.m., followed by clean-up and a movie/games/quiet time, then it’s lights-out at 9:30 p.m. 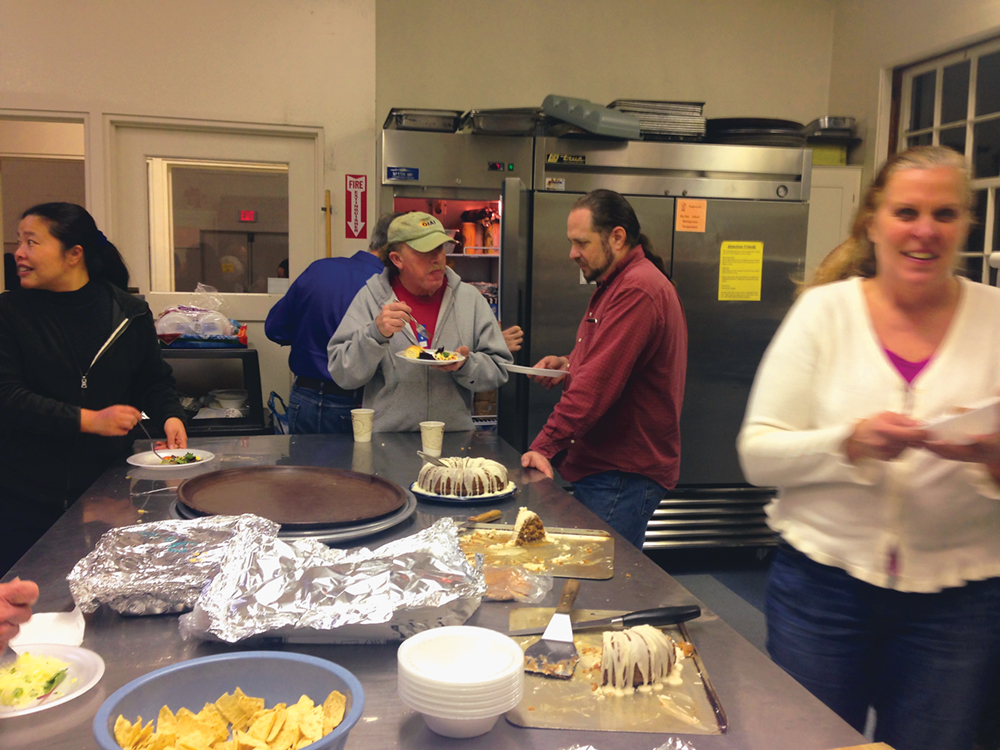 Overnight hosts stay with guests, and wake everyone at 6 a.m. the next day. Breakfast is served, guests help clean up, and everyone’s off by 7 with a sack lunch in hand.

During the warmer months, OVFS does still offer some services, including once-a-week showers in their mobile shower trailer. Throughout the year, OVFS coordinates with Help of Ojai’s Community Assistance Program (C.A.P.) for those who need more specific or substantial assistance.

Among the intangible but most important things the Ojai Valley Family Shelter provides is community. “Everybody needs community,” Martha says, “and the shelter offers community to those who don’t have one. It is truly a community. Sometimes they fight like real family, but they care for each other, they take care of each other.” 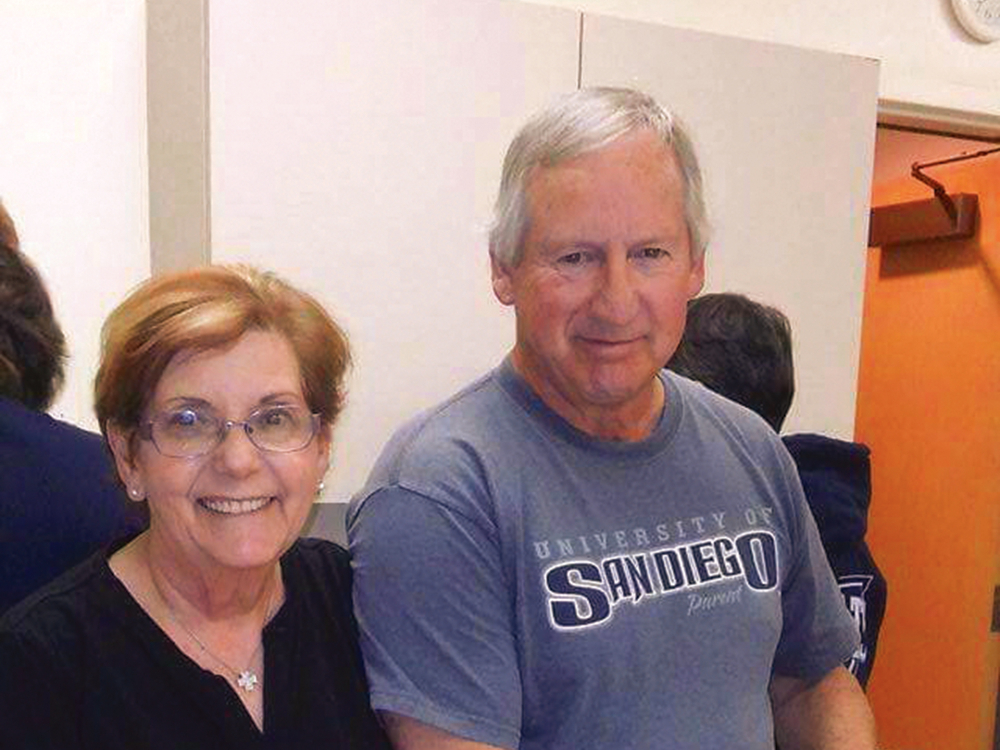 Not surprisingly, all of this takes a small army of volunteers. Some, like those who make the dinners, only come once. Others, like the intake volunteers, overnight hosts, shower monitors, lunch-makers, etc, are familiar faces who show up multiple times each week during the season. “We’re always looking for more volunteers!” Martha says. Teenagers (with adult supervisors), church groups, sports teams, clubs, families, friends, individuals … all are welcome volunteers.

The shelter relies entirely on volunteers, donations, and a few grants. They keep overhead as low as possible with only a couple of actual paid employees. Among the biggest current needs is a new shower trailer.

“What we have is an old RV turned into a shower trailer, but it wasn’t designed to do that. We’ve replaced the flooring three times! So we would love to get a real shower trailer, with two showers instead of just one.”

With the holiday season in full swing, give yourself the gift of giving back. That sounds cheesy, I know. But I can tell you from experience that you really do get back just as much as you put in.