Ojai Chautauqua — a big idea in a small town

It might be hard to spell, but the Ojai Chautauqua is a very easy sell.

Run by the local nonprofit Agora Foundation, the Ojai Chautauqua hosts panels of experts to tackle some of the most important and controversial topics facing us today. Immigration, fracking, Ojai tourism, water rights, the 2016 presidential election … you get the picture. Chautauqua events bring together experts from academia, politics, media, and the public and private sectors to enlighten and inform audiences through civilized discussions. 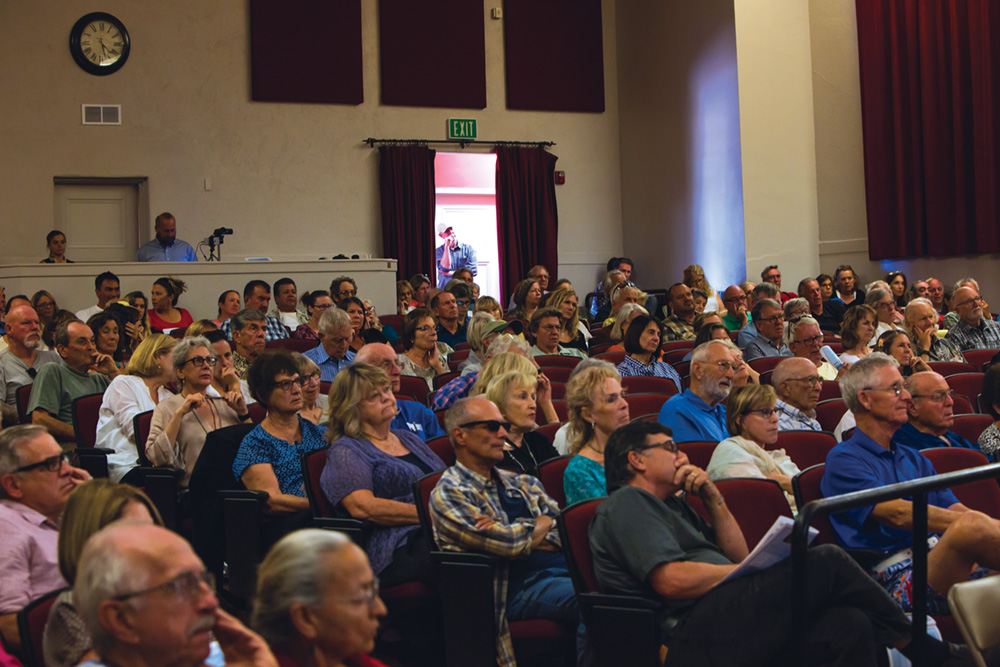 The Chautauqua events have grown in popularity in Ojai, as evidenced by the near-capacity crowd at the  last panel on water.

Is it possible that this tiny little valley 90 minutes north of L.A. is ground zero for the very thing that could save our country? More and more, I kinda think it is.

Why? Well, we just don’t listen to each other anymore. Whatever the reason(s), we’ve become so fractured, so splintered and divided in America that we’re beginning to lose ourselves. What do we all collectively stand for anymore? What can we all unequivocally agree upon?

Yeah, my point exactly. Never before in the history of our country has civil discourse been more essential. It’s mind-boggling to think that, despite being more connected than ever through the internet, we’re simultaneously more disconnected than ever. All of which is incredibly sad for such a social species.

So what’s the solution?

Talking. Listening. Respectfully considering viewpoints, facts, and ideas that might not entirely align with our own. And the Ojai Chautauqua is a really good way to get started along that path. The goal of each event is to inform, enlighten, and make the audience think — not to convince anyone of a specific ideology. The Ojai Chautauqua will often give you as many answers as the new and more profound questions it presents.

As you’ve probably discovered, “balanced” news is hard to come by these days. That’s why it’s so important to get several different voices together in one room, all at once, to delve deep into topics that have the potential to reshape our lives as Americans — and as humans.

The latest event, titled “The Future of Water in the Ojai Valley: What’s Changing and What Might Still Need to Change,” opened to a sold-out audience Sept. 30 at Matilija Auditorium. The topic of water has been broached by the Chautauqua in the past (the last being in April), but, to paraphrase moderator Tom Krause, the more you learn about water, the more you realize you don’t know. This latest iteration provided information on the current levels of Lake Casitas and the groundwater, what’s being considered to keep the valley from running out of water, and some of the options and obstacles to securing a sustainable water future for our area. With desalination plants, drilling 6,000-foot deep wells in the Matilija formation, and teaming up with two other water districts to connect to state water for a more secure water supply, the options are as broad as they are complex. 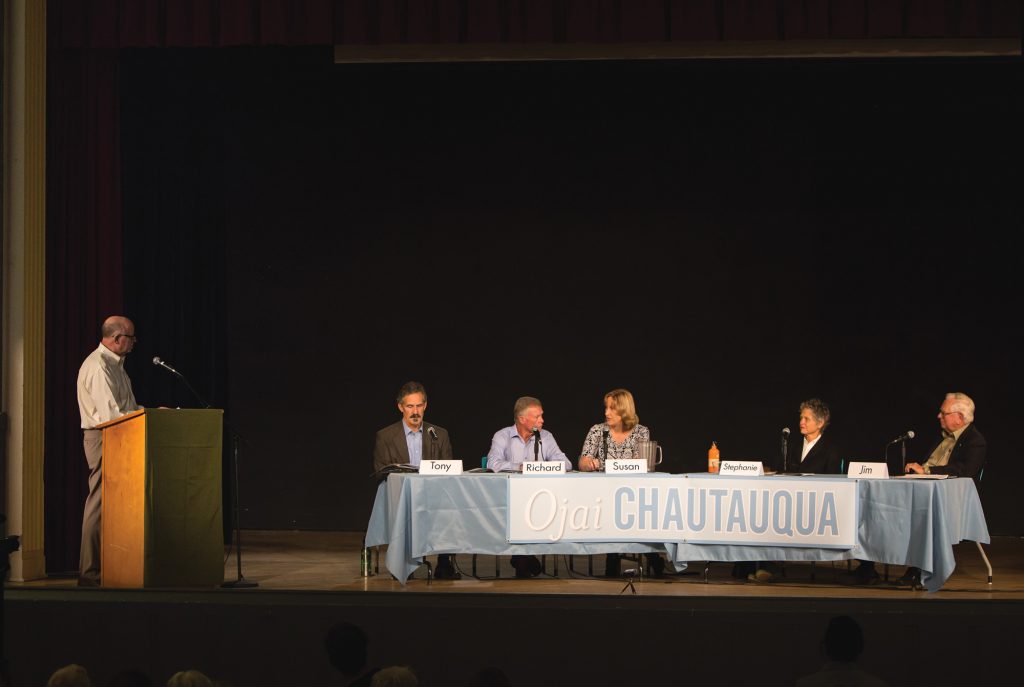 And, as we see with most topics vital to human survival, there were more than a few opinions on how to approach these things — both from the panel and the audience, which got a chance to ask the panelists questions in the second half of the discussion.

The interaction was powerful, insightful, and, as mentioned above, left us with new questions to consider. 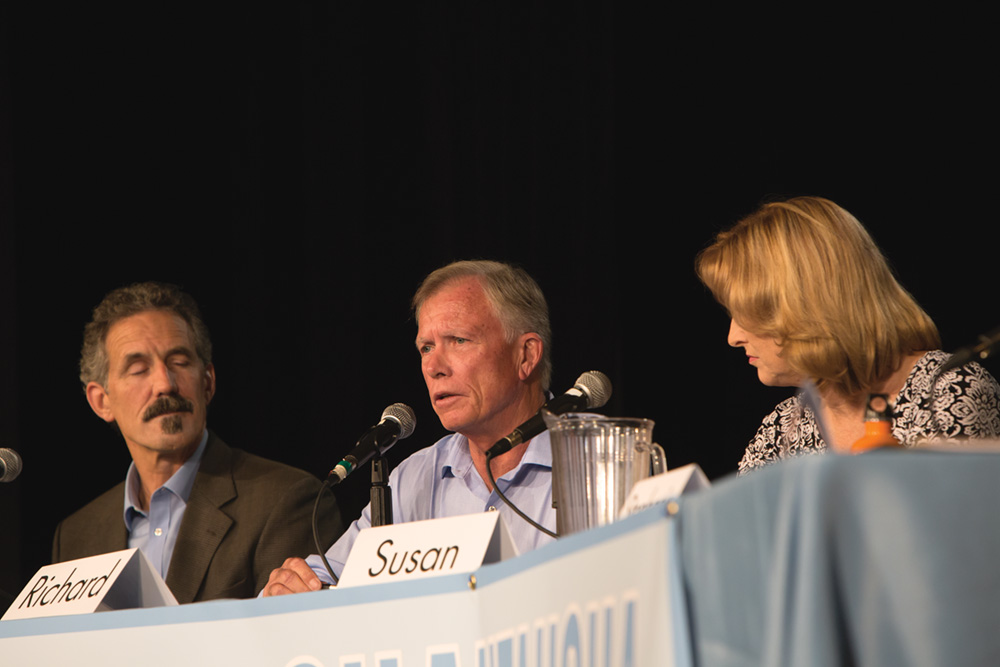 Every time I attend a Chautauqua, either to lend a hand to the organizers, take photos, or just listen, I find myself feeling a little bit better about the future of our world. People CAN come together to solve problems creatively. It just takes the right forum.

But, full disclosure: When I first heard about this Chautauqua thing, I was skeptical. (OK, maybe a smidge more than skeptical. More than a decade in a newsroom can do that to you.) After countless City Council meetings and various public hearings over the years, after reading the bile-laced comments sections on YouTube and news websites, I just didn’t have a whole lot of faith in humanity’s ability to be civil — let alone actually listen — to one another.

But once I attended my first Chautauqua, I discovered those cheesy elementary school posters were true: Like an umbrella, a mind works best when open.

As sometimes-moderator Dan Schnur (of the USC Institute of Politics) has said, “Ojai Chautauqua can set an example of how citizens can discuss the challenges facing our country while still maintaining a higher level of civility and respect.”

It’s incredible what’s possible when the goal is not to sway the audience’s opinion left or right, but simply to inform. Traditional news outlets are so often at the mercy of their revenue dollars. “If it bleeds, it leads.” But the cost of this business model has been to bleed us of something bigger than ourselves.

So do yourself — and me, and all of us — a favor, and keep an eye on ojaichat.org or Ojai Chautauqua on Facebook for the next event. It’s pretty amazing, what’s happening right here in our own backyard.

For more information on the Ojai Chautauqua, including full videos of past events, visit ojaicivildiscourse.org