The Alchemy of Ojai Botanika

In a lot of ways, Ojai Botanika bridges the gap between old-school and new. Founder Malina Majikina started her soap and candle company the way craftspeople have done since, well, forever: through word of mouth. But her business really took off when she began connecting with customers through social media platforms, which allowed her to vastly expand her reach. Today, Ojai Botanika ships its all-natural soaps, candles, and curios around the world. 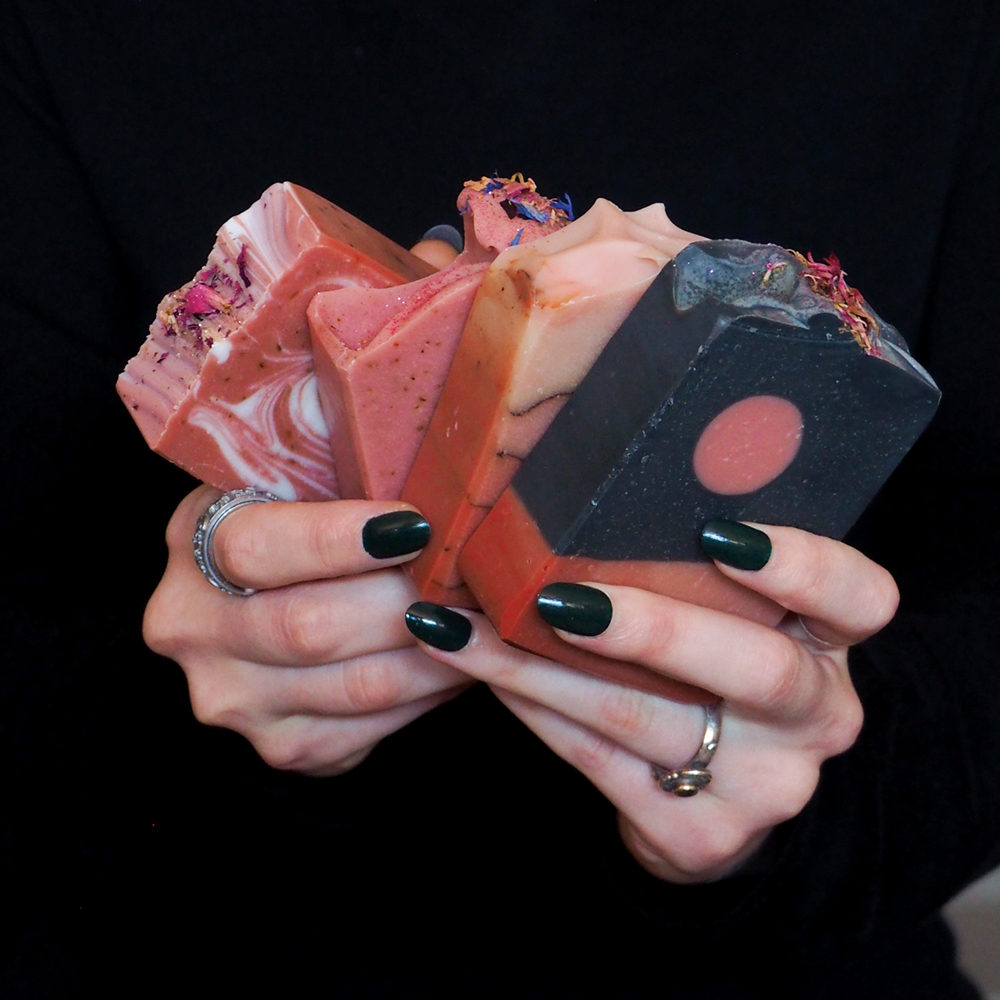 What began as a hobby in a teenager’s bedroom has, over the last 10 years, become a thriving business — one that sells out of stock so quickly, she has to remind her 41,000-plus Instagram followers to set their alarms for her release dates. Take a look at @OjaiBotanika on Instagram, and you’ll begin to see why. Her feed is full of carefully curated content, with rich earth tones, beautiful detail shots, and aesthetically pleasing reels inviting followers to “make a candle with me” or “pack an order with me.” That’s the new-school stuff.

But behind all of that visual goodness is true substance — the old-school stuff — that keeps customers coming back. Her products are handmade from high-quality, organic, vegan, and cruelty-free ingredients. And most importantly, they do what they claim. Her candles are gorgeous, and they actually maintain their smell, burn after burn (you’ll even notice their scent when they’re not burning). Her soaps look and smell amazing, but they also lather well, hydrating the skin rather than drying it out unlike many soaps you see in a grocery store, which are usually stripped of oils and are technically not even soap at all, but rather surfactants.

The ingredients Malina uses in her cold-pressed soaps and soy candles are carefully sourced. There is no paraffin wax, no phthalates, no toxic fragrances here — just organic, ethically sourced oils, cotton wicks, and natural botanicals. “I definitely go out of my way to source really high-quality ingredients,” Malina said. “A lot of them are food grade. When I source oils, I go through a small, woman-owned business that’s certified sustainable, certified organic.” Sustainability and quality go hand-in-hand for Ojai Botanika; even the packing materials are environmentally friendly. 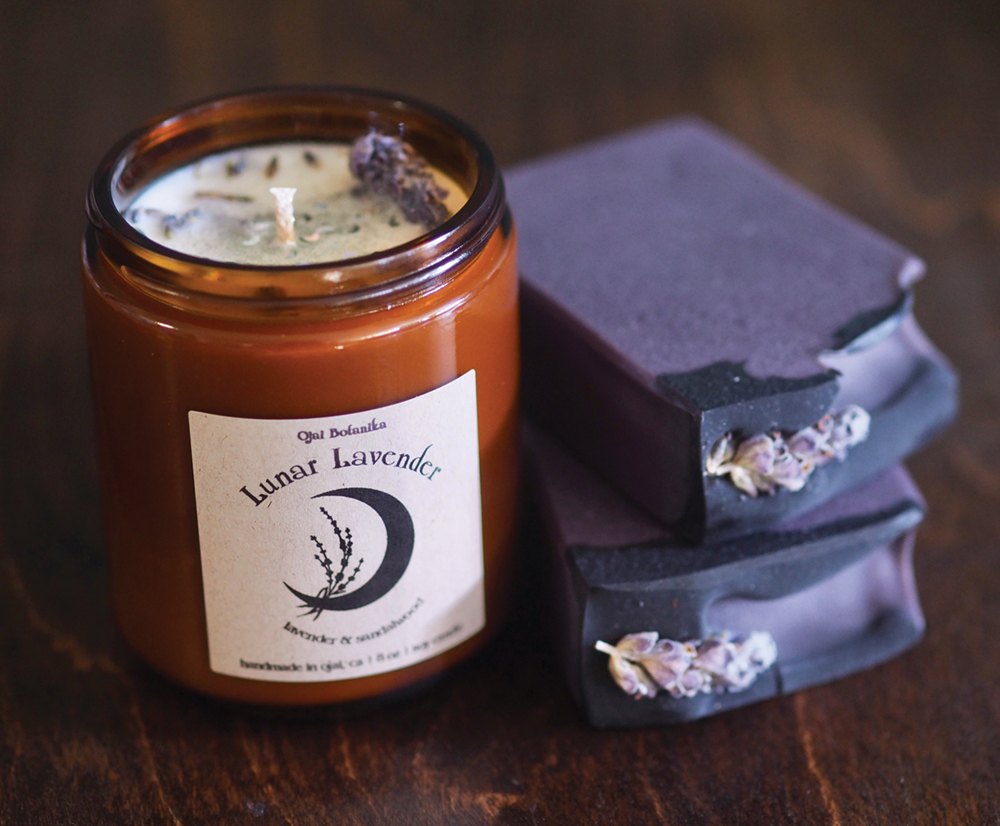 Both her soap and candle offerings change throughout the year, inspired by the seasons and astrological events. “I love doing seasonal collections,” she said, especially those that help bridge the gap between seasons to ease the transition. As the new year approaches, Ojai Botanika brings out scents that are light, cleansing and energizing, as well as scents that are comfy, cozy and warming. Her Sea Salt soap is always a big hit, with its lavender oil, bergamot oil, and sea salt. White Sage soap is another perennial favorite, made with homegrown sage Malina sustainably and ethically harvests herself, along with cedarwood, basil, and lavender. As she says on the Ojai Botanika website, “It’s like a sage smudge stick without the smoke.” Then there are those cozy, wintery scents like Woodlands — with cedarwood, fir needles, and patchouli, topped with juniper berries and cypress. She also returns again and again to the festive Winter Cabin, with its swirls of green, red, and white, its notes of fir needle, peppermint, cinnamon, and vanilla-like benzoin, and toppings of ethically wild-harvested mini alder cones, organic juniper berries, cranberry seeds, and ecoglitter (which is biodegradable). Yule Log is visually stunning, with flame-like swirls in its dark natural clays, with a cedarwood, cinnamon, vanilla, and blood orange scent.

The coziness continues in her winter candle collection. Yuletide Hearth carries you past the holiday season well with cypress, orange, clove, and fir; Woodland Wanderer, rings true to its name, with a woodsy blend of cedarwood, palo santo, herbal sage, and fresh cypress. Morning Ritual, meanwhile, is like a cup of java for your nose, filling the room with delicious scents of fresh, dark roasted local coffee and vanilla. 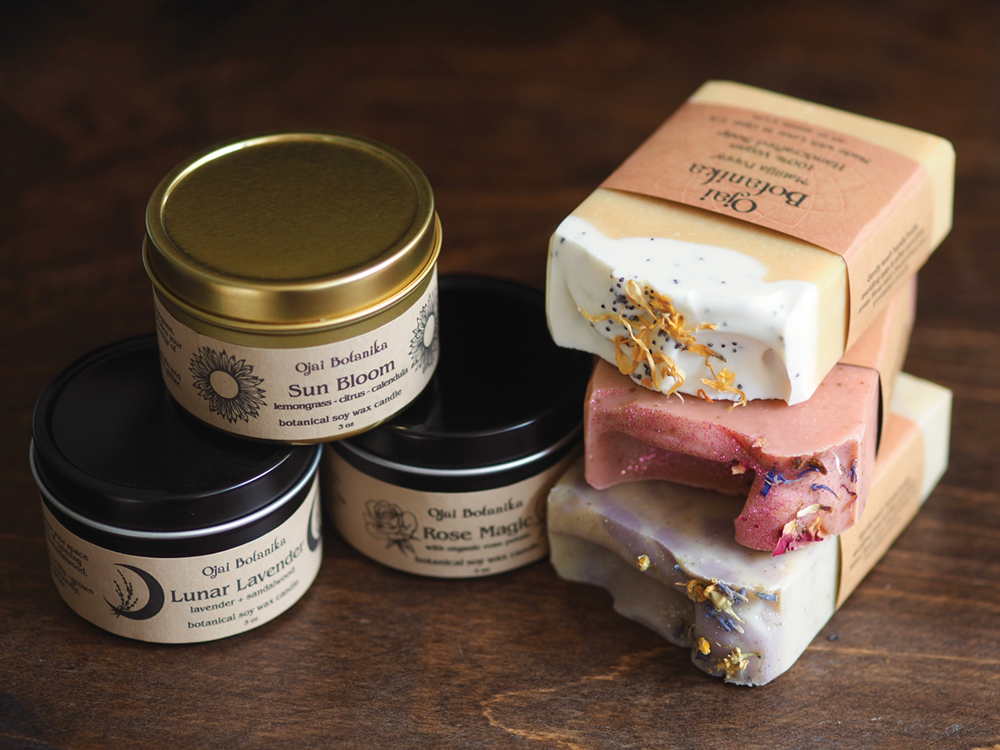 As a resident of the valley of the moon (Ojai is derived from the Chumash word for “moon”), it’s no surprise that Malina loves creating soaps and candles inspired by celestial happenings. Her Wolf Moon soap is especially popular, featuring a charcoal gray, night sky blue, and a yellow orb representing the moon, which she carves by hand. She makes variations for her Harvest Moon (with orange peel and cinnamon) and the Pink Moon (with notes of citrus, bergamot, and benzoin). Last summer’s Strawberry Moon inspired a candle, as well, with wild berry, rose, and vanilla and topped off with whole pomegranate flowers, rose buds, cranberry seeds, a quartz crystal, and ecoglitter. 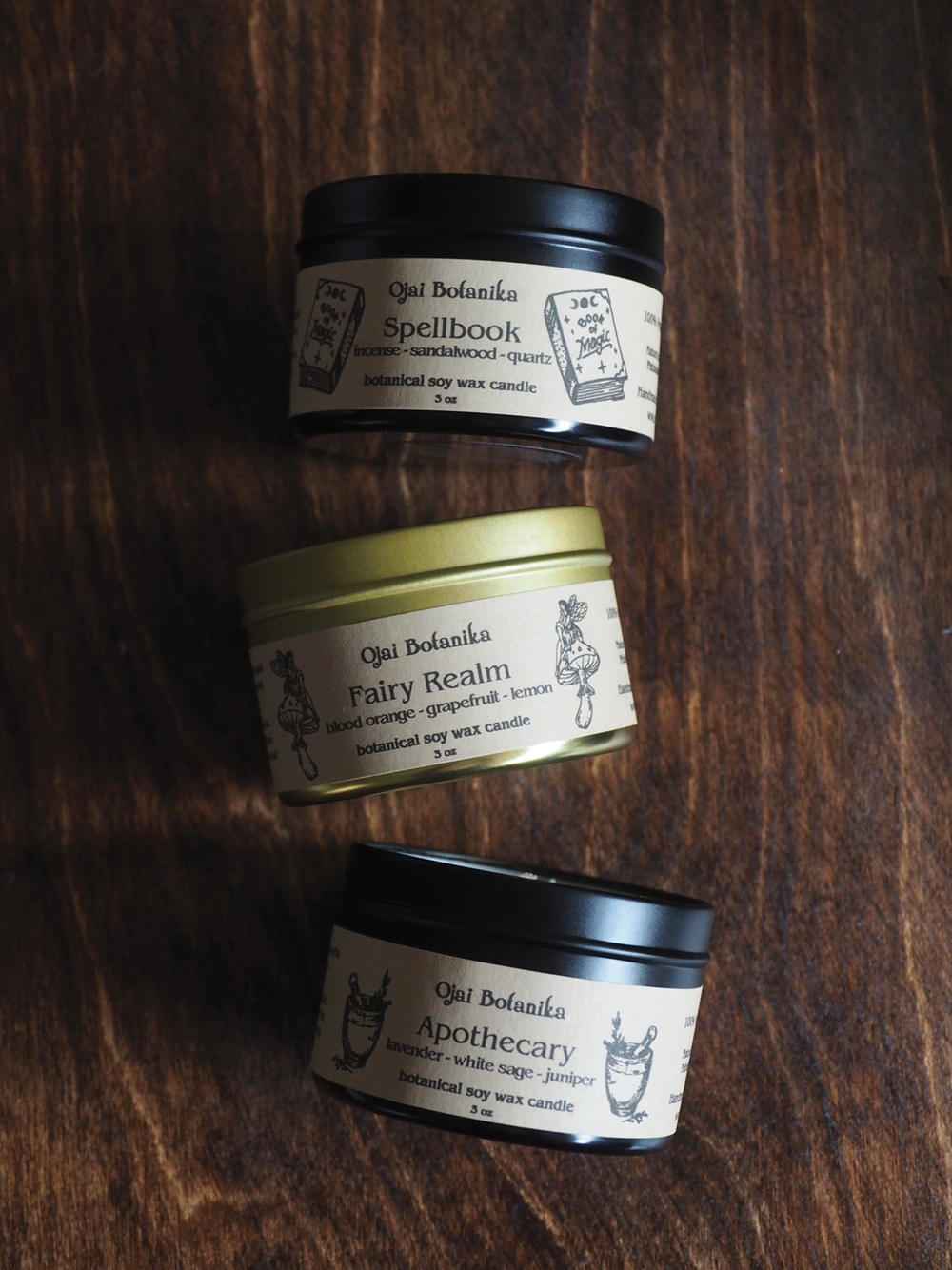 During the early spring, she’ll bring out the botanical scents, particularly ones inspired by her hometown like Ojai Lavender, Matilija Poppy, Ojai Rose, and Ojai Pixie (made with the much-beloved tangerines). Her most popular candles, year-round, seem to be Fairy Realm and Pixie Blossom, although their roots can be found in the springtime. Fairy Realm offers a citrusy combo of blood orange, grapefruit, and lemon, and a whimsical topping of Ojai Pixie tangerine peel, chamomile, calendula, safflower petals, ecoglitter, and a miniature glass mushroom. Pixie Blossom is a nod to Ojai’s springtime, when the entire valley is filled with the scent of citrus blossoms.

At the age of 25, this techie-alchemist has become a much busier person than she ever expected, constantly restocking her website, numerous Central Coast shops, and filling frequent custom orders. Ojai Botanika has compelled her to become a Renaissance woman — part product developer, tester, shipping department head, web designer, graphic artist, accountant, and social media strategist.

Malina started making soap at 15, when a family friend first showed her the process. Thus began a decade-long passion. She started giving away soaps to friends and family, and they were a hit. Soon a friend referred her to another friend, who was opening a shop in Ojai. “I took in a basket of soaps I had at the time — kind of a ragtag bunch of different soaps, just to show what I had,” Malina said. “She literally bought the whole basket right away. I was shocked!” 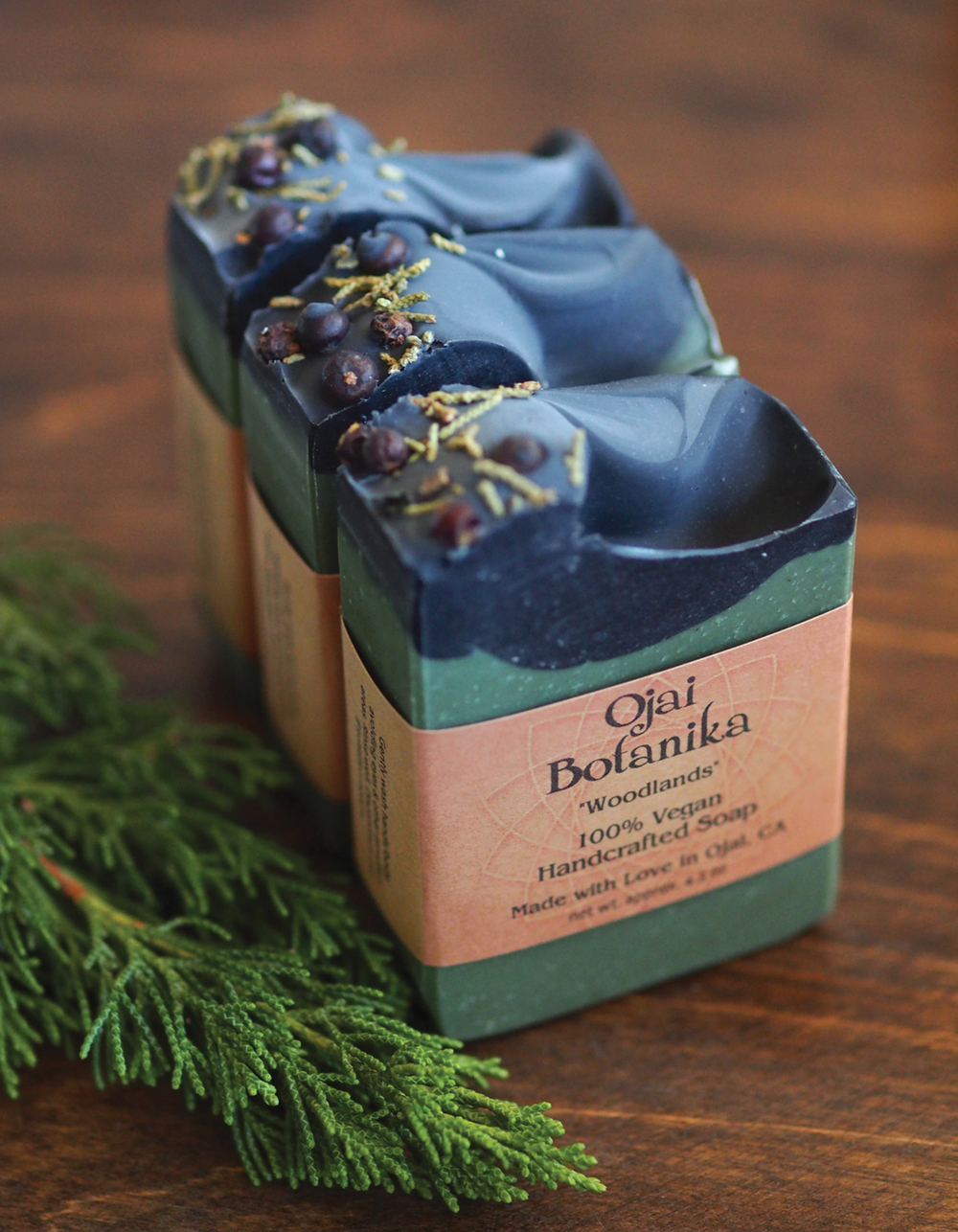 FiG became her first big wholesale client, and the downtown Ojai store continues to carry her soaps and candles today. They can also be found at the nearby Bungalow. Over the years, Ojai Botanika has continued to expand outside the boundaries of Malina’s hometown. In Santa Barbara County, find her at the Santa Barbara Company, which also uses her wares in their gift baskets. Further north, Ojai Botanika can be found in various shops around San Luis Obispo County, including in Cambria. Out of state, you can find her in Creatures of Whim in Lexington, Kentucky, and even in a tattoo shop in Ohio. Worldwide, of course, you can find Ojai Botanika on her website and, more recently, on Etsy.

Shops all seem to love her Ojai-inspired candles and soaps, like Matilija Canyon and Pink Moment — both of which feature scent and gradients of color inspired by the changing colors of the valley’s surrounding mountains as well as its world-famous sunsets. They also regularly feature her seasonal offerings. 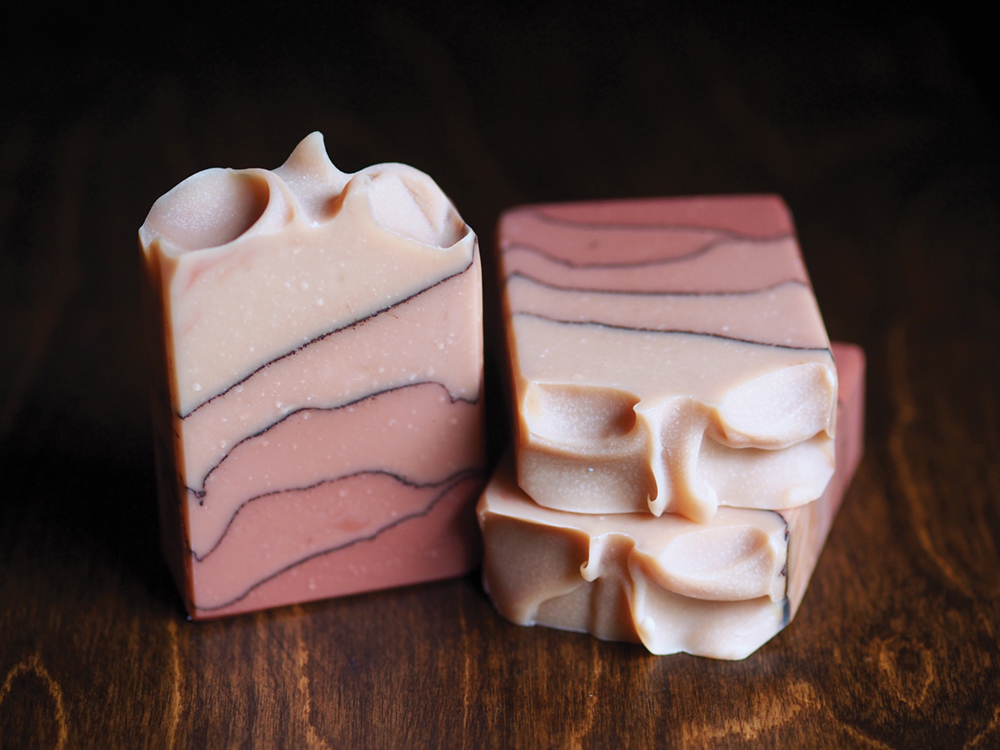 Despite running what are, essentially, two full-time businesses herself, Malina still manages to find some downtime. The part-Okinawan, part-English, part-Irish Ojai local loves fantasy novels, video games, and baking (more than once it’s been suggested she start her own bakery).

But it’s the ability to be creative in her business that drives her. “I’m drawn to the artistic aspect of it,” she said. “It’s like alchemy. You have oil and water, and somehow combine them together to make this totally different end result. It’s a pretty magical process.”

For more on Ojai Botanika, including the latest restocking at Central Coast shops, follow @OjaiBotanika and visit ojaibotanika.com.