Martha Moran always knew she would come back to art.

Growing up, she loved to make things, but after pursuing creative studies at UC Santa Barbara, she discovered a flaw in her plan: “The whole gallery thing, trying to make it as an artist, terrified me,” she said.

That revelation inspired her to change careers and head to UCLA film school. It proved a lucrative decision; she was able to build a career in Hollywood, working as a writer and director for children’s TV shows and movies. It was a creative career, yes, but a bit different than what she had imagined.

By the early 1990s, Moran sought a change. And that change was Ojai. She was an avid hiker, and what better place to get away from it all — but still be relatively close to work — than Ojai?

“I moved to Ojai in 1993 from L.A,” she recalled. “I was still story-editing shows, doing it long distance, and it was great to be able to do that.”

On her wanderings through Ojai’s backcountry, Moran began finding rocks stacked on the sides of the trails. “I loved that. There was something magical seeing them,” she said. But she noticed one shortcoming. “The stone wasn’t that nice. And so it occurred to me, wouldn’t it be interesting to do rock stacks, but with more interesting stones?”

That question would shape the coming decades of her life, and take her around the country and world in search of stones and inspiration for her art. 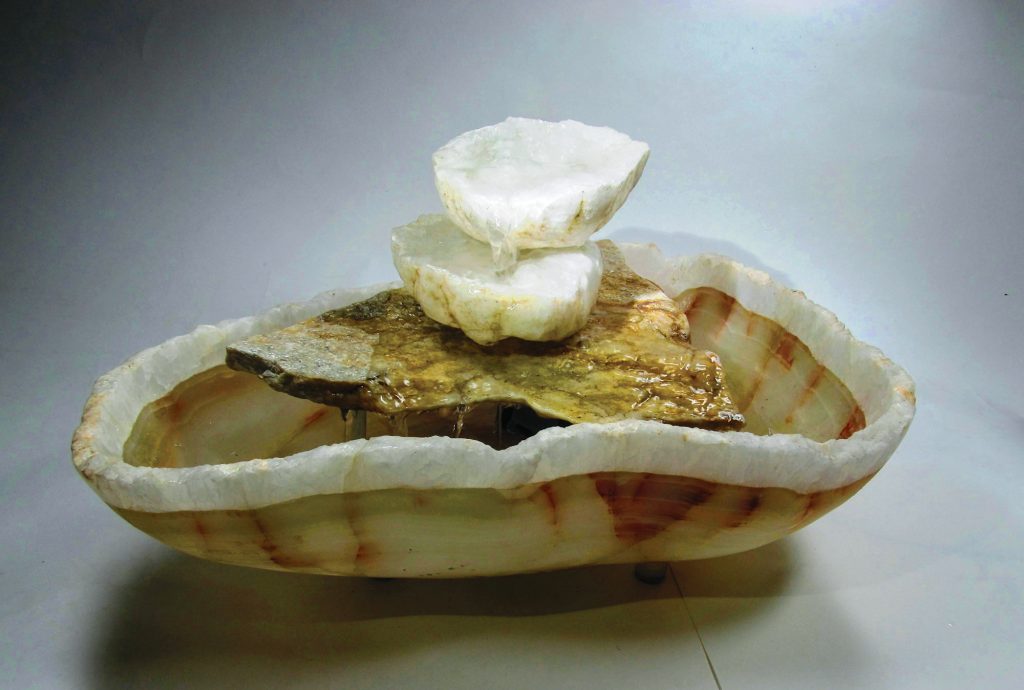 A Mexican onyx bowl complements a “waterfall” made with a quartz crystal from Madagascar. The edge is rough because it was crafted to keep the “rind” — that’s what the outside surface of a stone is called — intact and part of the design. It can be seen at Earth Tonics Skincare on Montgomery Street.

Today, Moran is a popular rock stacking artist whose one-of-a-kind sculptures lend a natural, yet timeless aesthetic to both public spaces and private homes across Southern California. Moran also specializes in unique fountains and custom rock-work in showers and murals, among other things.

Increasingly, her pieces incorporate materials outside of the traditional rock stacker — such as metals, fishing floats, and found objects like sea glass.

Moran started out small, with mini-sculptures meant as desk-top art. “At first I made very tiny rock stacks, thinking of people in terrible work spaces needing something beautiful, something to turn it into a sacred space,” Moran said. In those early days, she admits being intimidated by power tools — which she now uses to drill holes to stack the stones on stainless steel rods.

And the stones! Where would she get stones from? Turns out, the answer was easier than she thought. Moran joined a few gem and mineral clubs and began going to rock shows, in particular the Tucson Gem and Mineral Show. Along the way she met experts willing to share their knowledge. “I met some really lovely geologists, very smart scientists, who can tell you what every rock is, and what works with what,” Moran said. They also shared their insider knowledge of upcoming sales — and that, as it turns out, has been one of Moran’s best sources of stones.

“One I went to in Altadena, the sale was the people who had run the L.A. County Fair Gem and Mineral show for 17 years!” she remembered. “And they’d inherited collections from their own parents, and from other people who had run the L.A. County Fair exhibit. So they had rock from places where you can no longer collect, from the petrified forests, Death Valley, all these places that are now monuments. So the rock is extraordinary and rare, and really fun to work with!”

As her stone collection grew, so too did her power tool collection — and, more importantly, her confidence. The more sculptures Moran did, the bigger she felt she could go. “It’s interesting! And it keeps evolving!”

Moran also loves mixing local Ojai rocks with more unusual stones and gems. “I love found rocks, normal boulders and sandstone native to our area, and adding beautiful sculptural elements in them. Perhaps inlay them with a geode.” She also enjoys creating unexpectedly harmonious combinations. “Obsidian, petrified wood, copper … I like mixing things that you don’t tend to see together.”

Gradually, Moran’s work expanded into creating fountains of varying sizes. As drought set in, she found fountains were a refreshing opportunity to incorporate the sound of water into xeriscape gardens, where the goal is to create beautiful spaces with as little water as possible. “You can have a beautiful garden, and have a sense of water, hear water, and it feels so reassuring,” Moran said, “but you’re not using that much! And you can plant around it, so you’re not wasting water, you’re actually getting something out of it.”

Some of Moran’s fountains are indoors, such as those she’s created for psychologists’ offices, where the sound of water flowing over rock is not only soothing to those in the waiting room, but also provides extra privacy to patients in session.

Others pieces are a bit larger, but they have the unmistakable mark of Moran to them. She cites several examples — fountains where the water emerges from geodes, oddly-shaped rocks from Mexico, or stones from Madagascar. “I keep finding new stuff and thinking, ‘Oh, that would make a cool fountain!’” 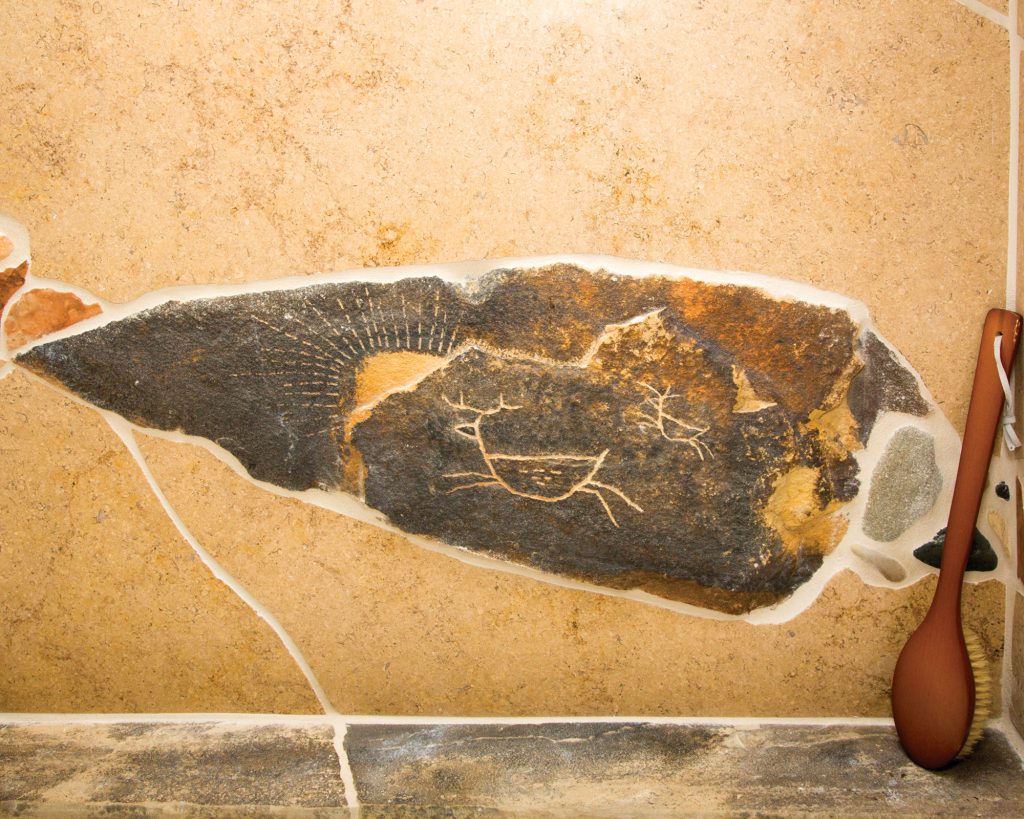 And though it’s a fun form of art, Moran takes her fountain-building seriously. “Boy, there’s a lot of ugly fountains around!” she laughed. “So many are plastic. And they’re just trying to make them easy for people. But that’s why I always give a year for free (to my clients) to come over and adjust their fountains as needed. I always tell them, if they’re having a problem, stay in touch with me! Call me, we’ll solve it! So many people turn beautiful fountains into planters, but fixing them is easy.”

One project she’s excited to get started on fixing: fountains that survived the Thomas Fire in December 2017, when everything around them turned to ashes. “I know 14 people who lost everything in the fire,” Moran recalled. “One couple — their house was probably one of the first houses that burned — they went back to their property after the fire, and my two fountains were still standing. I’ll re-sand them to get the soot off, but they still stood. That’s the thing about stone!”

The timeless aspect to her art is what keeps her coming back. There’s nothing like installing a sculpture and finding it fits the surrounding landscape perfectly, “As if it had always been there,” she said. “That’s my favorite part!” She remembers a fountain she made for a consultant friend’s beach condo that features a large cobalt blue fishing float and dark blue and white sea glass. “It’s simple and elegant,” she said. “And when we installed it, it looked great, like it’d always been there! They said they have a completely different attitude toward their outdoor space now. I love that!”

That happened again with another client, who wanted a piece that felt zen both indoors and out — even though it was placed outside. “So we put it at a height, where they could see the top of it when they were lying in bed. I crafted it so that you don’t have to be outside to enjoy the fountain.”

But some things were made for the outdoors, like her “Men-an-tol West” at the Agoura Hills Recreation and Event Center, which she installed in 2014. It is inspired by a rock formation in Cornwall, England, comprised of two rock pillars separated by a large O-shaped rock, whose historical significance dates back at least to the Bronze Age as a sacred place for women trying to get pregnant (or to cure their children of the rickets, depending on who you ask). Moran traveled to Britain to see it in person and was so moved that she created her own California interpretation, which she inlaid with otherworldly “fairy stones.” 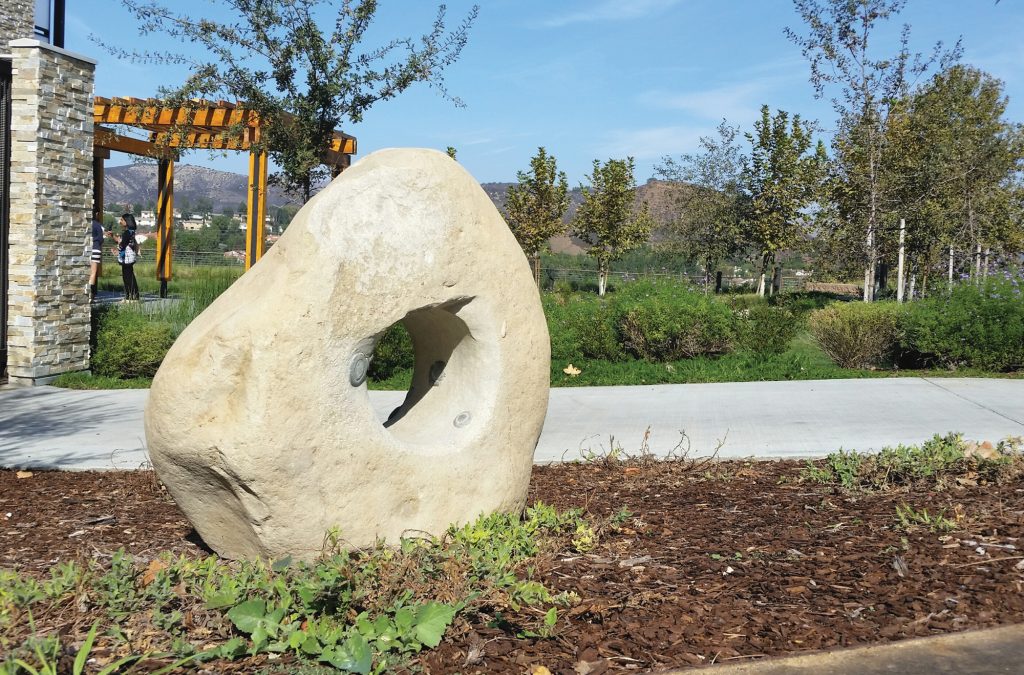 Other public installations include sculptures in front of the Ojai Valley Museum and Contempo Hair Design, as well as a tribute sculpture Moran created for the museum’s “Scorched Earth” exhibit. That one featured a panther stone from India that, in the right light, looks like it’s on fire. It can now be seen at the city gallery in Ojai City Hall. 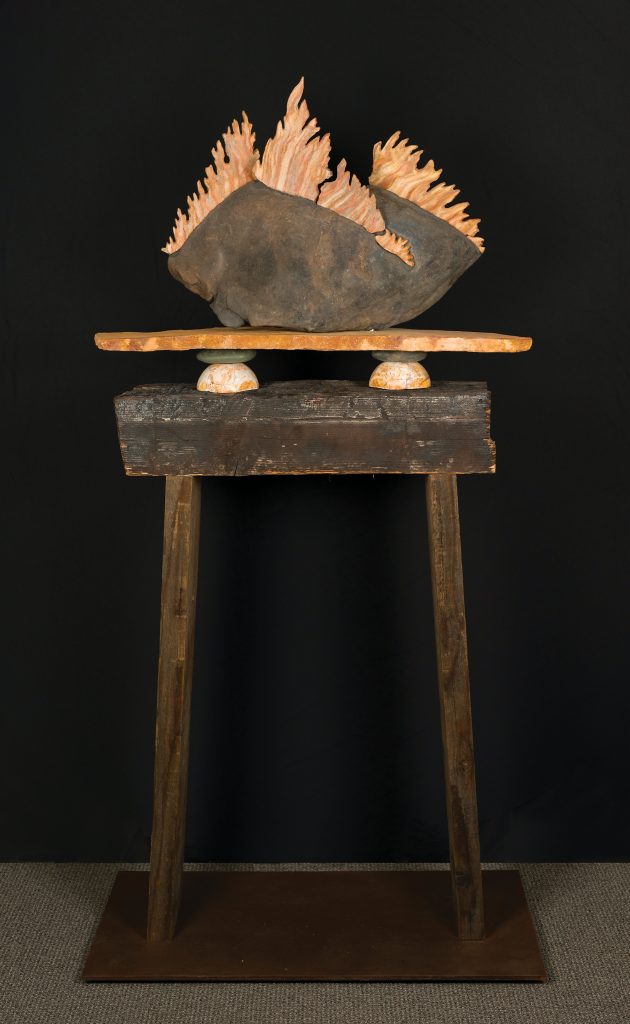 Altar the Fire Gods” is now part of the City of Ojai’s art collections.

And then, some of Moran’s pieces were made especially for one person or one family, such as her shower pieces. She started this aspect
of her art in her own home, after a house  fire required a rebuild of her bathroom. She inlaid stones in ribbons, creating something not just one-off, but that also has deep personal importance with petroglyphs she designed herself. She did the same for a local business woman, crafting a petroglyph she calls “The Rainmaker,” a nod to the woman’s business prowess. In yet another shower, Moran took stones and sea glass that her avid backpacking clients had collected from all over the world, and incorporated them into the design. “So that one’s completely different,” she said. “They can point to stones and say, ‘that one’s from New Zealand, and that one’s from Australia.’ They can name where the individual stones came from!”

Moran’s passion (though she dislikes the word) for building keeps growing; she’s working on commissions for the City of Ojai and a cottage renovation on Aliso Street.

But stones aren’t the only thing Moran is passionate about. She’s also a reiki master, and currently serves as president of the Ojai Studio Artists, a nonprofit that’s 35 years in the making. Its 70-plus artists will be opening their studios this weekend, Oct. 13 – 15, for the annual Ojai Studio Artists Tour (see ojaistudioartists.org). While Moran won’t be in town to join the tour this year, she encourages both locals and visitors to check out this not-to-be-missed opportunity to get a glimpse inside some of Ojai’s most amazing — and diverse — studios.

To tide you over until she opens her studio again to the public, here’s some local spots to check out her work in person:

For more information about Moran and her work, visit ojairockstacker.com