The art of Jes MaHarry 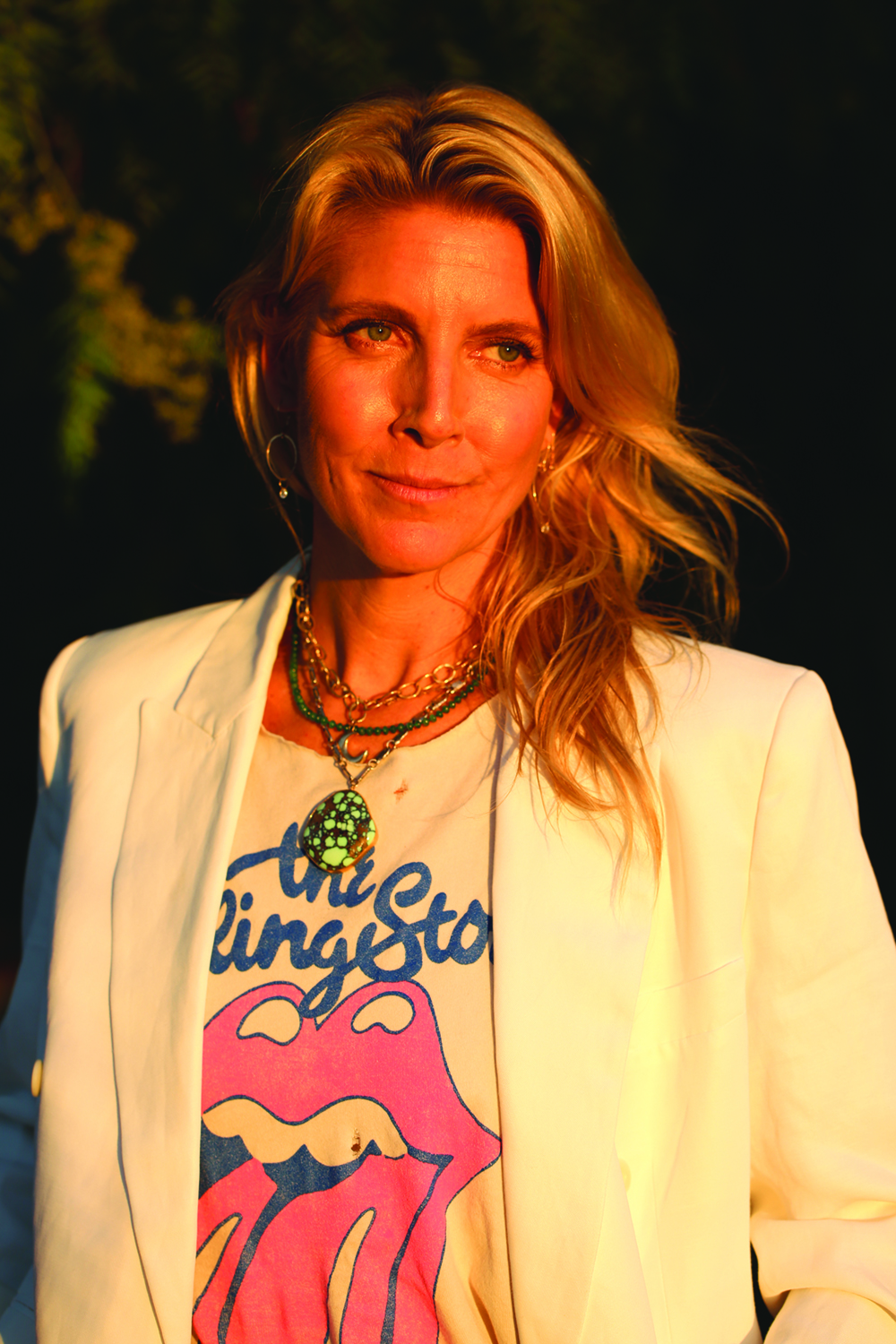 Sometimes when you step into an unfamiliar place, there’s a vibe, an energy, a magic to it — something that’s hard to describe, but undeniably there. That’s how you’ll feel entering Jes MaHarry’s shop in downtown Ojai. The renowned jeweler/artist and her family have put countless hours into revamping the flagship store, where every item, every light fixture, even the boards in the floor, tell a story that’s entirely MaHarry’s.

Though the shop has been in the heart of Ojai for five years, it was shuttered for 18 months during the pandemic. We met there in late winter just before its reopening.

“This is a really special store, we put our heart and soul into it … everything has a story,” MaHarry said, pointing to the rounded, copper-topped counter stamped with messages. She described how she and her family put in 15-hour days over six months to give the space new life. MaHarry and her sister, Wendy, ripped up carpets, painted the colorful, whimsical murals on the walls, and installed custom flooring. “It’s from Jane’s broken fence,” MaHarry explained. “She put her head through it.” Jane, it turns out, is a 2,000-lb orphaned Angus cow that MaHarry rescued. The damaged and worn wood was repurposed to make a section of flooring in the store. “Now Jane’s on a 1,000-acre ranch. She still knows me, when I call her name, she comes running to me.”

Personal touches abound. MaHarry’s father, who has since passed away, created the sculptures in the store. Her husband Patrick Henderson, a skilled and artistic welder, made the jewelry cases, tables, and many of the lights for sale in the store from old gears and other motorcycle parts. The walls of the shop showcase the wildlife and animal photography of MaHarry’s other sister, Jennifer, which include a stirring image of a herd of American mustang horses during a round-up. A large lighting fixture in the center of the shop was wired by her sister’s stepson from several large can-lights that were used in a 1960s Disney film.

Along with the jewelry she’s most known for — which is available on her own website and through the dreamy Sundance catalog — MaHarry also draws and crafts ceramic pieces. Her simple one-of-a-kind plates and bowls are available in her store, as are her line drawings which have been collected in a coloring book. “They’re not technical,” she said about her drawings and other creations. “I’m not taught or trained. It’s very organic how I make things.” 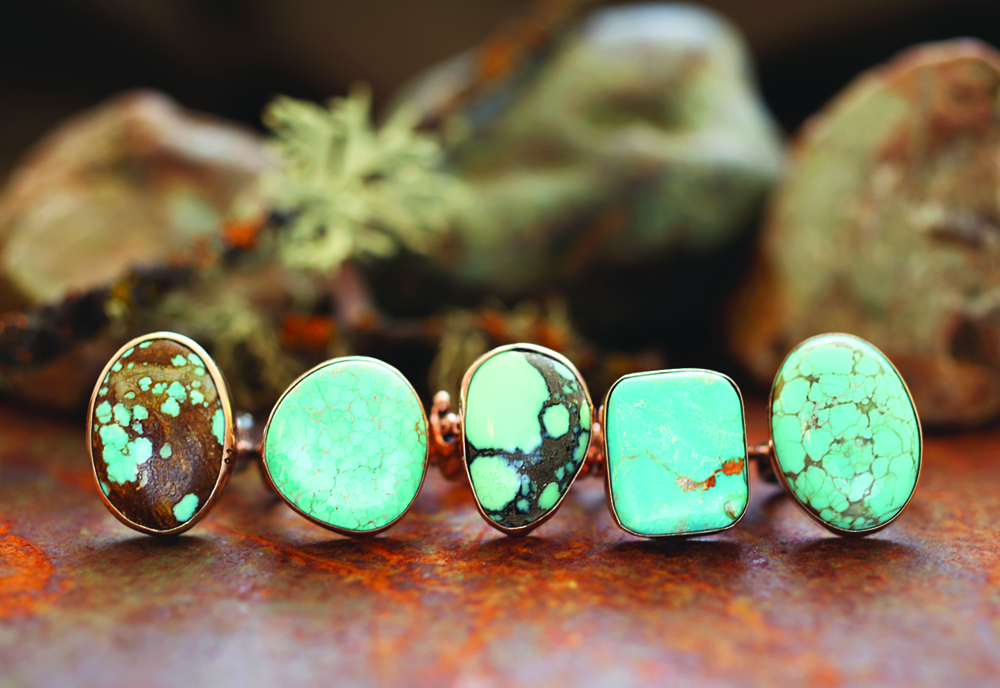 MaHarry has been making things from found objects since the age of 3 or 4. “I’ve always loved making things, even as a little, little child,” she recalled. “One of my first memories is playing with my grandmother’s costume jewelry — the colors, the beads.”

It felt natural for her to create things with artists of all media all around her: musicians, writers, painters, she added. “I always made jewelry with little things I found — washers, feathers, bones. I’d give them to people, and they’d wear them.” 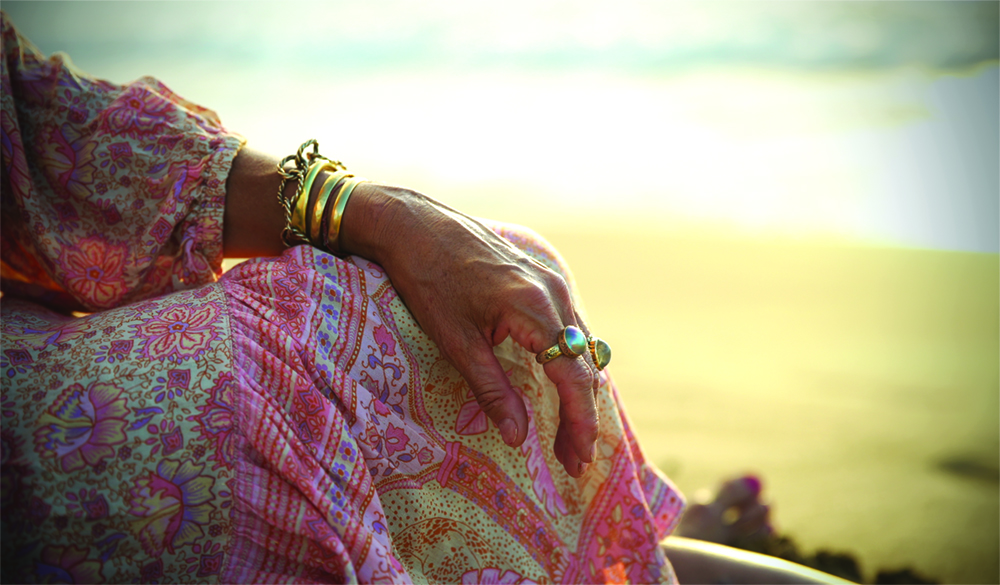 Years later, when studying illustration in college in Columbus, Ohio, the college president would tell her that jewelry making “was not an art form.” She just knew that was wrong.

MaHarry found herself in the library researching ways of making jewelry and worked mostly with copper or brass wire — generally things she’d find. A local coffee house was selling African trade beads, and she was immediately attracted to them. “I love the aged, worn feel,” she said. “They were 200 to 300 years old.” That led her to start researching the history of the beads being used in trade in Africa. She loved the natural hues, “the earth tones, all colors from the minerals in the ground.” 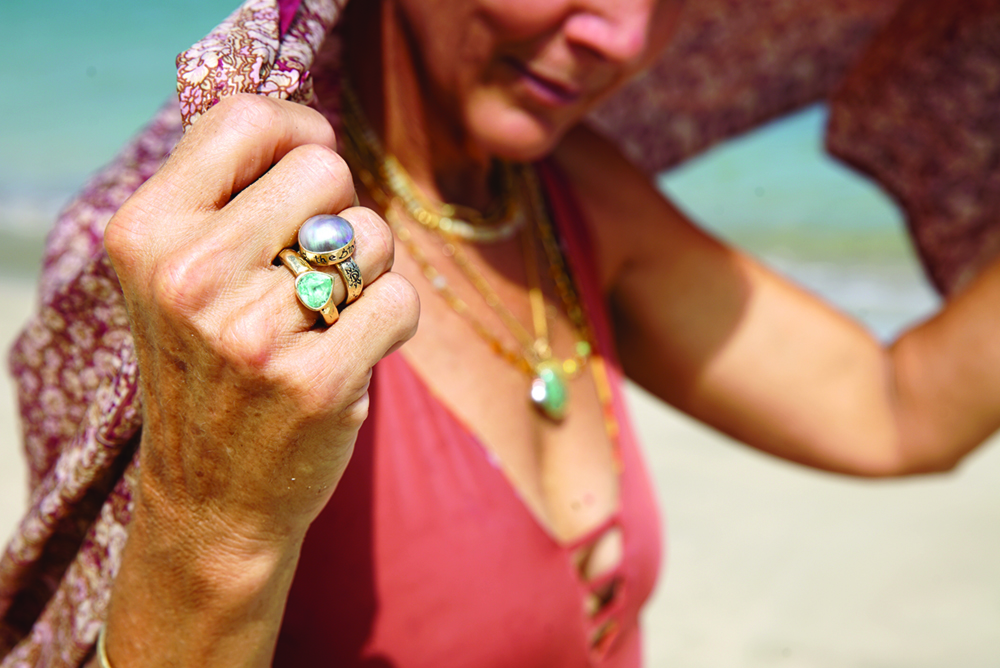 She never did graduate from that college, for want of a few credits. While her father wanted her to take a job on Madison Avenue with friends of his in the advertising world, she knew it just wasn’t the right fit. “I was in these waiting rooms, with businessmen and my portfolio … it was like Mad Men,” MaHarry remembered. They looked at her “crazy, weird drawings” and would ask, “What are you doing here?”

She was at a point where she had to figure it out on her own. “My dad said, ‘I’m not giving you another penny.’” Today she laughs describing the challenges she faced and the jobs she had and failed at.

“I got fired from everywhere,” she said — waitress jobs, or at McDonald’s, Burger King, and Wendy’s.

“I’d save up my money and pay $7 for one bead” — one of those African beads — to make a piece of jewelry with. As she kept getting fired, “It was a huge awakening … a continual reminder that I’m not doing what I’m supposed to be doing.” She was squeezing in her jewelry-making between her working hours at those dead-end gigs, taking every opportunity to draw or make a new piece. “I never thought I could earn a living doing it,” she reflected. “I was trying to fit into a mold that wasn’t me.” 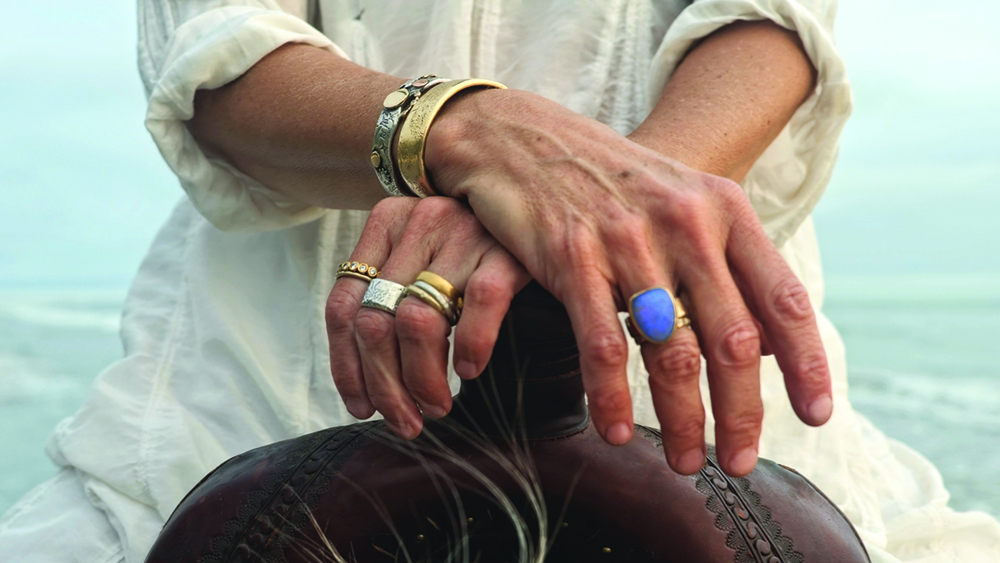 Eventually, MaHarry’s mother paid for her to take a class at a local museum. It was the first time she worked with silver, she said. “It was like the parting of the sea, that moment for me when I realized I could draw on metal. Everything else in my life funneled into that moment.”

That’s when things started to shift. She found shops in New York that would sell out of her handmade earrings in a week. Her first pairs of earrings were made from soda can pop-tops with beads and charms. She soon learned about casting, and that opened up an entirely new possibility: to be able to make more than one piece from an original design. 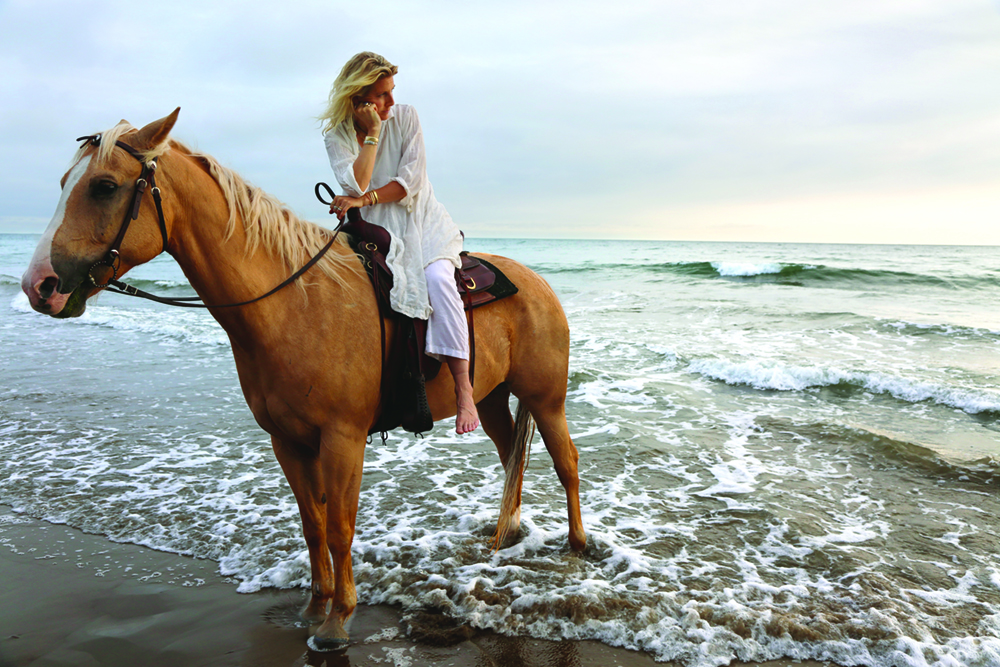 Today, MaHarry’s wildly successful — not to mention stunning — jewelry line is still breaking records in the Sundance catalog, and flying off the shelves both on her website and at her shop in Ojai. All of MaHarry’s pieces are handmade by a team of people who have found their way to her studio. The pieces each have a story, like the top-selling tree ring that was inspired by the strength of her father. A piece, she said, remains among the most popular in the Sundance catalog. She credits the success of her pieces to the message and the story they contain, and the meaning they impart to the person who wears them. 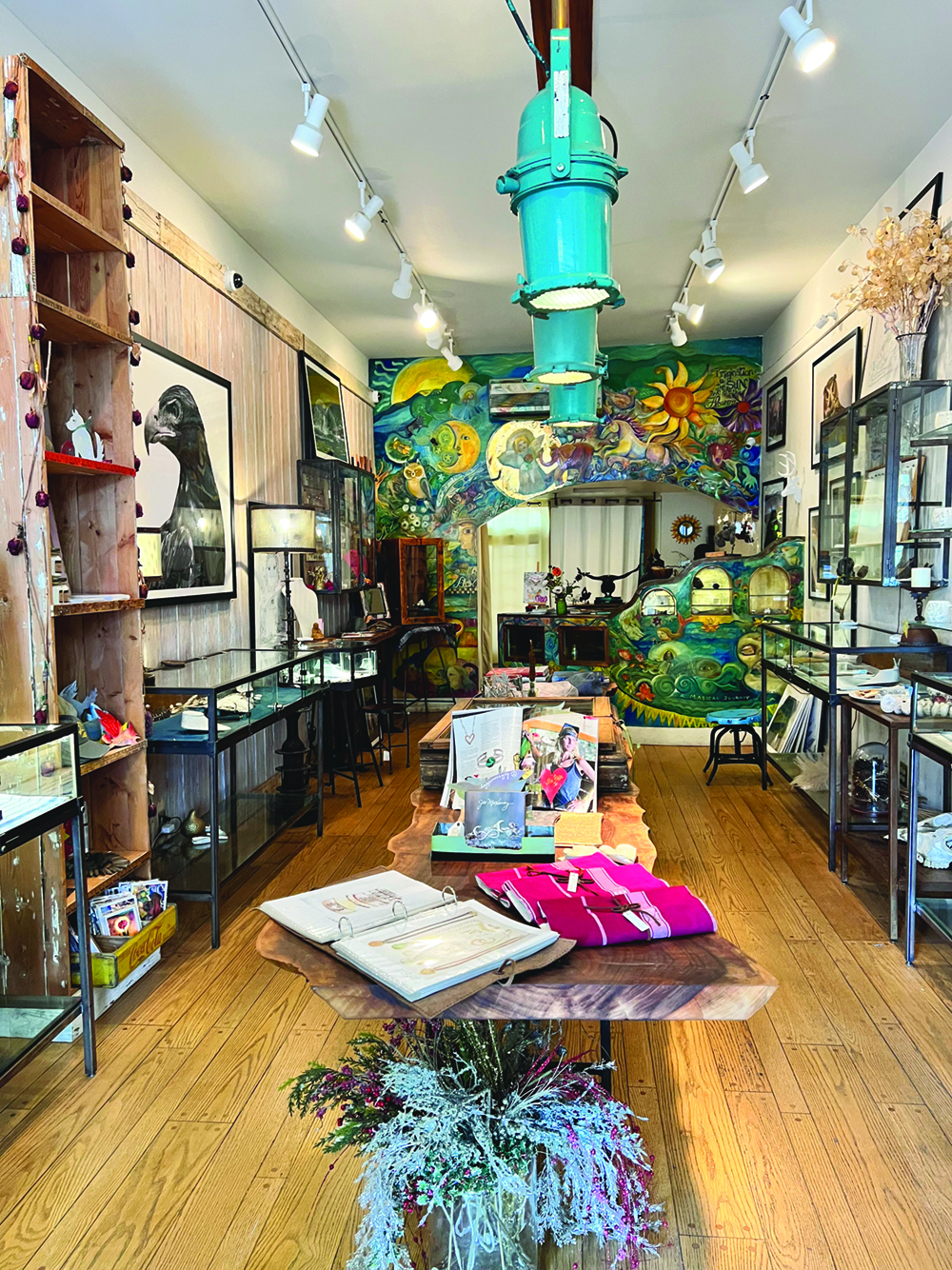 But the road to success was paved with missteps. Still, MaHarry pushed on. As she found herself in the learning curve of building a business, she’d be without cash but still working to fulfill orders and attend tradeshows, where her pieces would sell out again and again. The first tradeshow netted them just enough money to buy a fax machine, which was needed to receive orders from the larger department stores. “We did everything wrong,” and spent too much money getting to the show and creating the pieces for the show. “And his iguana pooped in the fax machine and broke it,” MaHarry said, laughing with Patrick at the memory.

After a successful tradeshow in New York — where their display was made from a gate they pulled out of the snow and ice — photos of MaHarry’s pieces started making the rounds. They were suddenly on billboards in New York, and her pieces were being worn by the likes of Susie Tompkins from Esprit, Hillary Clinton, and even the Pope. She would eventually get her jewelry into Macy’s and other stores, garnering a $45,000 order, and finding herself suddenly with 19 employees.

Her business was growing fast, and she had her first opportunity to get into the Sundance catalog. “But I wasn’t ready … in my craft,” MaHarry recalled. “We were not polished enough. I was making my ear wires by hand. We were hard-working, continually working, but really rudimentary.” So, she made a decision. “I made a promise to myself.” Even though the Sundance catalog had become her “goal of all goals,” she wouldn’t more forward until she was ready. “I wouldn’t act on something that doesn’t feel right.”

Several years later, she felt ready, and crafted a rose gold ring. She put images from the story of who she was into the gold band. “Fire, wind, sun, rain, horse, heart.” To MaHarry, they are part of her life, her favorite things, her love of animals, and the Ojai Valley where she makes her home.

She was ethically sourcing her gems before that was a thing, and she ensured that the materials she used were always top-quality. Nothing dyed, nothing plated, “All with an authentic energy.” There was pressure to change her approach to lower the price, but MaHarry refused. “I can’t sacrifice my ethics on why I’m doing this to sell a cheap version,” she asserted. Her attitude and dedication have cultivated a dedicated following. 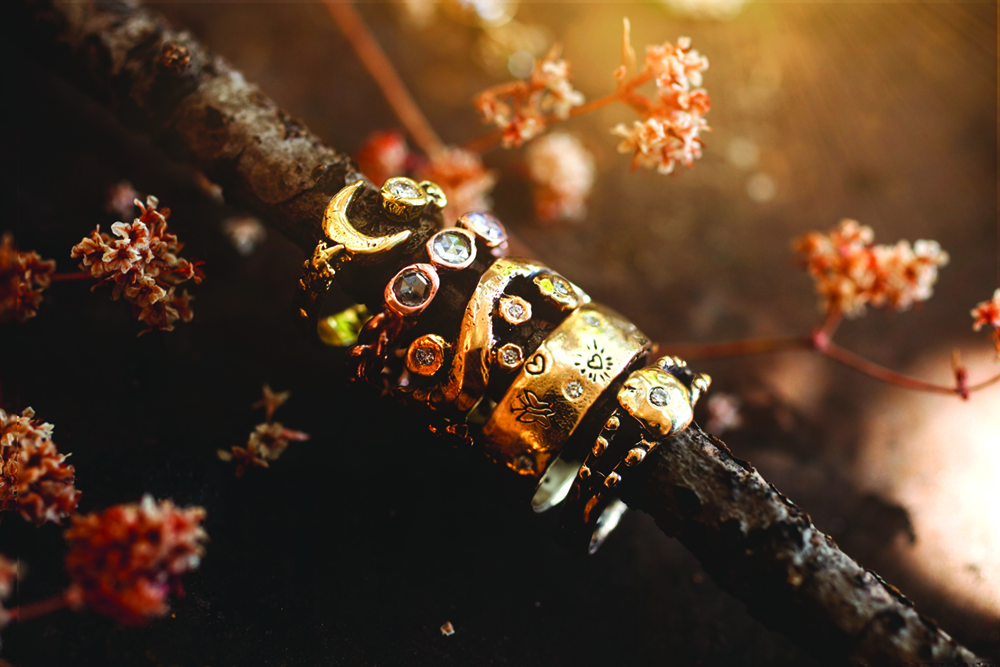 Messages are written into the pieces — charms, rings, bracelets — creating a “hidden good vibe” in the pieces. “We get letters and gifts” from people who buy her jewelry and want to share how that ring or necklace brings them joy.

“That is the beauty of it,” said MaHarry smiling. They are seeing and feeling the love put into each piece.

The Jes MaHarry Flagship Store is located at 316 Ojai Ave. in downtown Ojai. For more: jesmaharry.com