SLO Down and Explore Highway 227

Discover rolling hillsides, and almost 30 wineries making this a detour worth taking
By Bennett Barthelemy

It wasn’t all that long ago: Our grandparents would pile the kids and the dog into the car and go out for a Sunday drive in search of new adventures on the quieter, lazy highways not too far from home. In our region of the Central Coast, there are still many such backroads, the blue highways on the nostalgic paper maps that denoted a two-lane, somewhat rural road off the well-beaten path, and connected tiny communities and estates to the outside world. In some ways, this feeling that time has forgotten us here still exists.

Along the Central Coast not far from the intense 101 freeway, you will find historic wooden buildings that dot oak woodlands, neatly nestled in the golden rolling hills of the coastal ranges. Working farmsteads offer their inviting fruit stands, and  cattle munch quietly into the gloam of another simple day. Some of these mellower and often scenic byways have been quietly revitalized with vineyards and tasting rooms, as well  as bicycle lanes for those wanting to slow it down even more. This is essentially the character of the Edna Valley, and State Route 227. 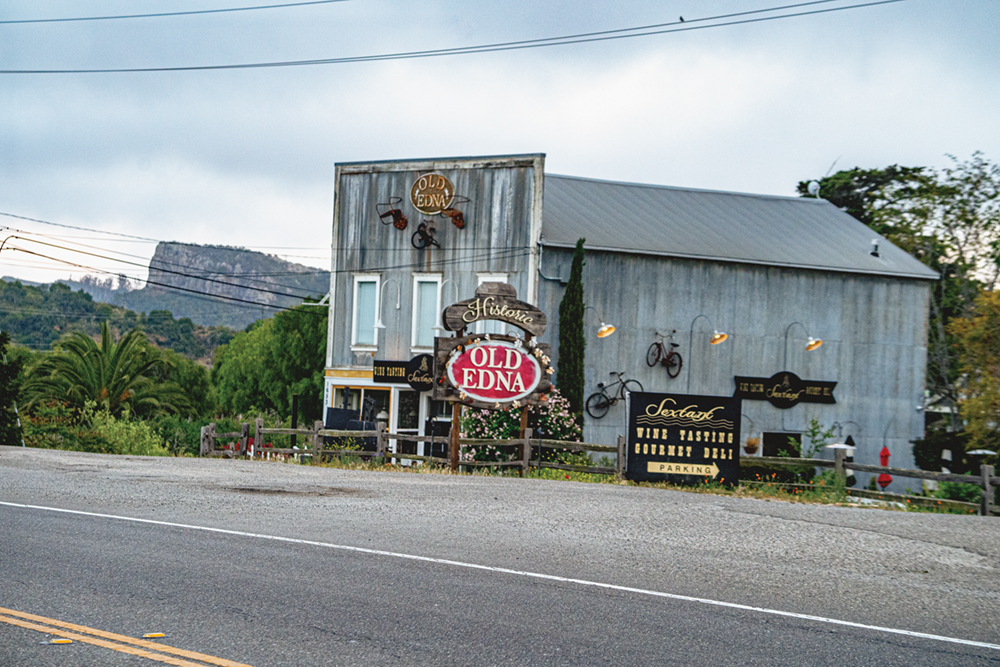 Brought your bikes? Old Town Edna is about halfway down the 227, making it the perfect jumping-off point to explore the surrounding countryside. Photo by Bennett Barthelemy

The Edna Valley is just 5 miles inland from the coast, and essentially parallels the 101 freeway. It provides a nice alternative offshoot from the traffic, and the drive itself is recommended if you have a spare half hour.

Like many towns along the Central Coast, Edna started as a deeded Mexican land grant in the 1840s. The highway first appeared in 1933 but didn’t officially become “the 227” until 1964 when it got its official number and corresponding signage. It wasn’t until 2000 that the town of Edna changed hands again, when restoration began to replicate some of its old charm and began very actively inviting tourists into the area. 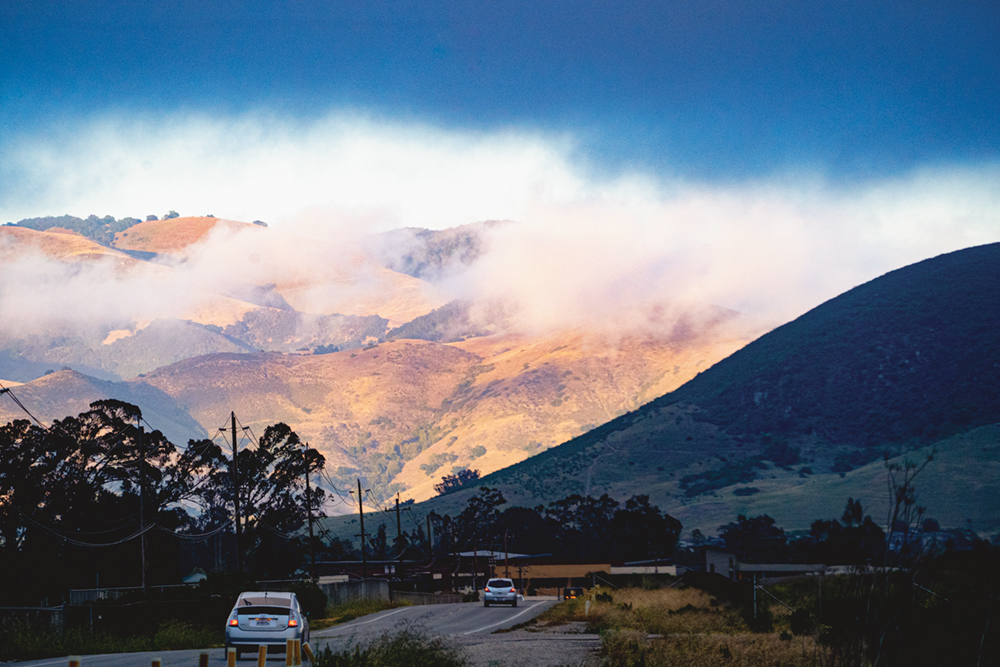 But let’s back up just a bit for a turn-by-turn, if you will. Heading south on Highway 101 through San Luis Obispo, the exit for the 227 lies across from the famed (and quirky) Madonna Inn. The Inn began in 1958 and features over-the-top decor and delightfully themed rooms. So far, I have only been in the men’s restroom, and I have to say, that alone was an unparalleled architectural experience, just not in the way you might think. It’s worth a trip to find out why.

After crossing Highway 101, the 227 then cuts through various SLO neighborhoods, and quickly becomes rural after you pass the San Luis Obispo County Regional Airport. It’s a neat place to stop to watch airplanes, and grab a beer in one of the nearby breweries. Summer also brings live music to the area, particularly at SLO Brew (slobrew.com) with its event center and beer garden.

But it you’re more of a wine drinker, drive on. The meandering 227 highway bisects and provides easy access to one of the denser concentrations of quality vineyards, cellars, and tasting rooms in California. And as we know, the Central Coast is world-renowned for its vineyards and vintners. This appellation, blessed with the coastal fogs, creates incredible Mediterranean micro-climates that mimic, and arguably surpass, some of the other magnificent grape growing regions in the world like coastal Croatia, Italy, Spain, and France. One fun idea is to bring your bicycle and park in Old Edna townsite, which sits at about the midway point of the 14-mile-long highway, and fan out on a ride to enjoy some of the nearby tasting rooms. The road is gently rolling on the valley floor and into the surrounding foothills, so the grades are not too stout. 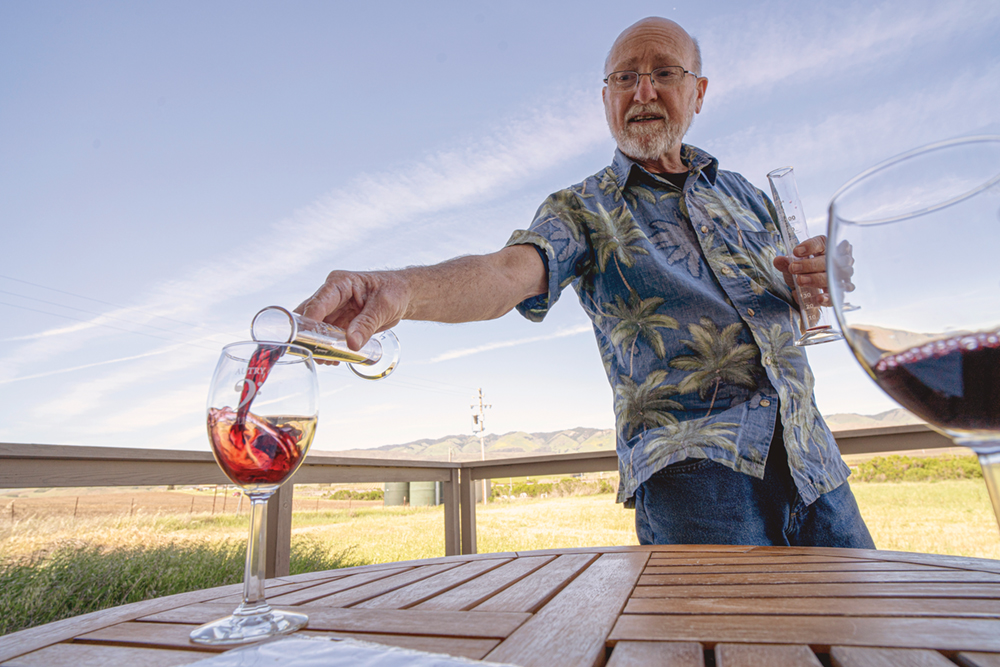 All told, there are almost three dozen wineries and tasting rooms spread across the Edna Valley, many on the 227 itself, and several more off Orcutt Road which runs parallel to the east. Because of its climate, you’ll find plenty of top-notch chardonnays and pinot noirs in particular. No matter which you choose, you’ll find sprawling patios and stunning views at every stop. Take your time and discover other hidden gems, from a pumpkin patch to rescue centers for turtles, tortoises, and donkeys. 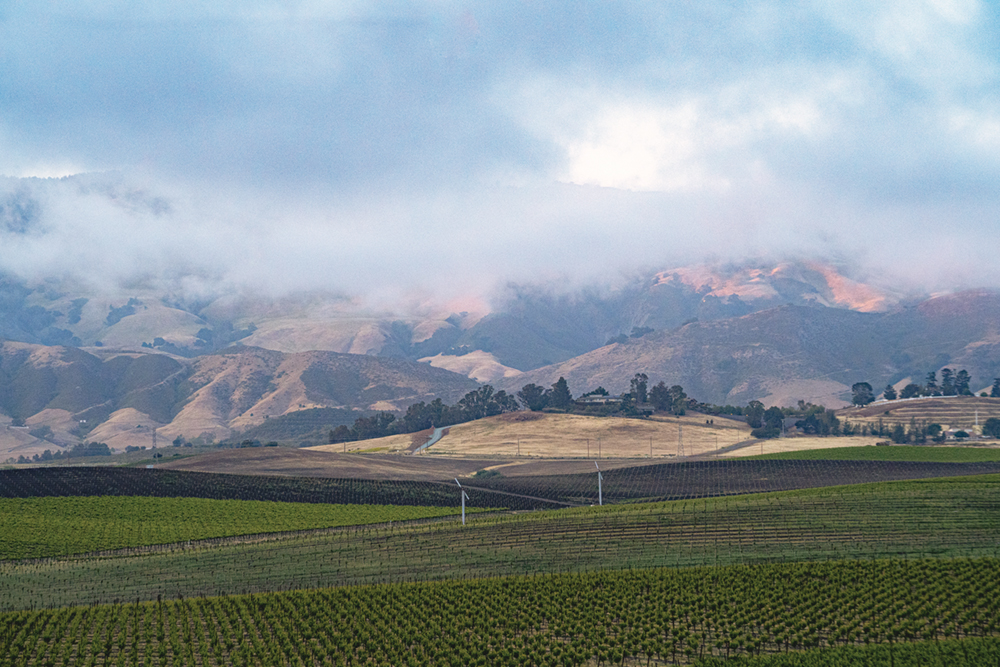 After passing through Edna Valley, the highway crests barbwire, eucalyptus, and cattle dotted foothills, and descends to Arroyo Grande Valley. After enjoying some tasting rooms, it’s nice to finish off the evening at one of a handful of diverse and high-quality atmospheric eating options in Arroyo Grande Village, located at the southern terminus of the 227 where it hooks back to the 101. Recently, we chose Gina’s Italian kitchen. Seared scallops with penne pasta and handmade ravioli with shrimp and crab, paired with their solid selection of wine and draft beer, rounded out the day perfectly. So please go explore. You have been officially invited.