Fusing the Flavors of the 101

The diverse landscape and climate found along the 101 is what makes the region not just so good for agriculture, but also an international destination. From the world-renowned wine country to the plethora of craft breweries, this area has a little of something for everyone that can appeal to a wide range of palates. But some of these establishments are going past their standard offerings to craft beverages that fuse several ingredients and highlight all that this area has to offer. 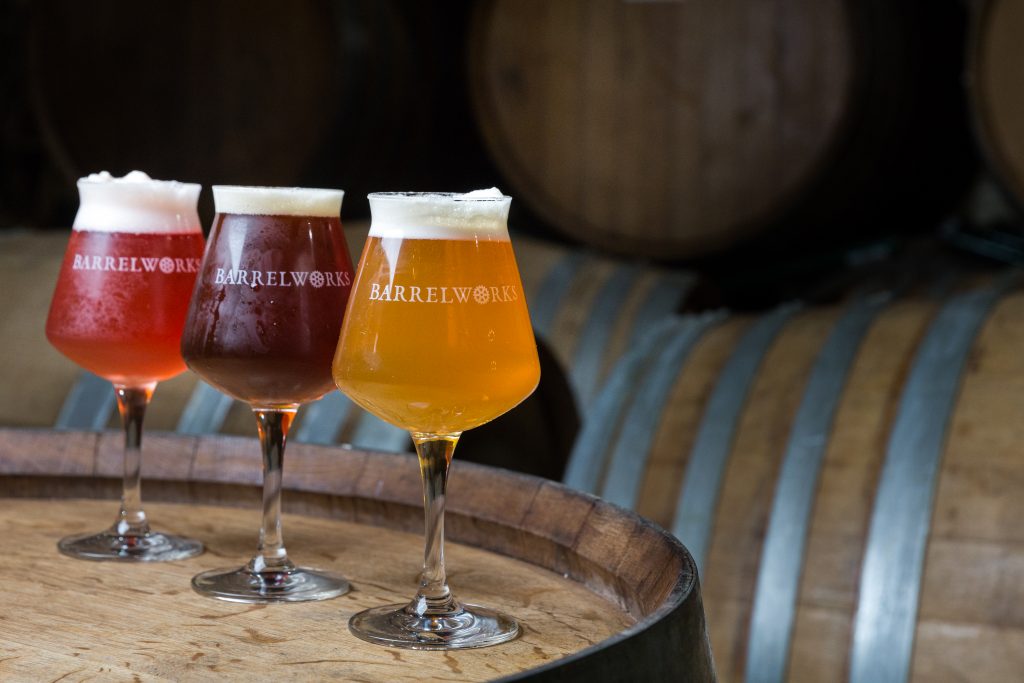 No brewery has done more to put the Central Coast on the map as Firestone Walker Brewing Company, and especially Barrelworks, a separate facility that houses their barrel-aging program. Since opening in 2013, Barrelworks has made its own name for itself and has cemented Firestone Walker’s legacy in the craft beer world. While their barrel-aged strong ales have received plenty of praise, the sour and wild-fermented beers of Barrelworks are known to rival the famous lambics and sour beers of Belgium. Many of these beers are made with a variety of ingredients and incorporate local fruits, even some that include grapes from the very vineyards that make this area such a celebrated wine region. The end result is neither beer or wine, and is instead its own experience.

These beer-wine hybrids began actually as a collaboration between Firestone Walker and Mikeller, the famed Danish craft brewery. When coming up with ideas, grapes were suggested, and both breweries quickly jumped on board. Jim Crooks, Master Blender for Barrelworks, started exploring local vineyards and began experimenting with Sauvignon Blanc and Chenin Blanc must. This sparked what Jim calls the “curiosity phase” of the beer-wine program. He quickly realized that these beers could not be approached with the standard methods and Jim began experimenting further with different grapes, techniques, and microflora. An early experiment with grapes actually helped form the cornerstone of Barrelworks. One of the yeasts Jim discovered on a Chardonnay grape skin produced such a nice, crisp Belgian-yeast flavor that he knew immediately it would become their house yeast. This wine yeast now ferments a good majority of Barrelworks’ saisons and other beers. When Andrew from Andrew Murray Winery in Los Olivos began helping Jim with their beer-wine hybrids in 2013, the program began to really take off. Over the years the two have experimented with a wide range of grape varietals and both brewing and winemaking techniques.

Today, collaboration remains an important part of the process and these experiments have culminated in the Terroir Project. Each fall, Firestone Walker gets together some of the world’s best breweries for a festival that features beer-wine hybrids crafted only from grapes that have been grown within 100 miles of the respective brewery. But when the festival is not happening, it is easy enough to visit Barrelworks at their Buellton-based tasting room attached to the Firestone Walker restaurant. Visitors can taste a range of their barrel-aged specialties, including their beer-wine fusions. Bretta Blanc incorporates Sauvignon and Chenin blanc grapes from David Walker’s family vineyard into a silky yet tart brew that has white grape aromas of passion fruit, honeydew, and guava. Thin Skin is made with pinot noir grapes and brings flavors of black cherry and peppered earth while the similar themed, Zin Skin, features zinfandel grapes and is more herbal with a prominent American oak character of coconut cream. Of course, Barrelworks is an ongoing experiment and each visit will get you a different set of these imaginative brews.

Down in Santa Barbara, Third Window Brewing Co. has been experimenting with a similar process, but with a beer that has its own tradition. The feast day of Saint Barbara, the city’s namesake, is held each year on Dec. 4 and is celebrated with burbara, a holiday porridge made of boiled barley, pomegranate seeds, raisins, anise, and sugar. When Third Window founder Kris Parker heard of this, it sounded like the perfect recipe for a beer-wine fusion. About five years ago Kris got together with his neighbor, Potek Winery, and friends at the Orange County-based The Bruery to craft their own interpretation of burbara. Kris is actually the grandson of Fess Parker, actor and founder of Fess Parker Winery, and so had already worked on a range of beer-wine hybrids with The Bruery. The result was called Bierbara and was a blend of beer with Santa Ynez Rodney’s Vineyard Alvarelhao raisins, Fess Parker estate raw barley, Turkish apricots, and a spice blend. Since then they have changed the recipe each year. This year’s rendition is a Belgian Quad aged in bourbon barrels with syrah grapes and traditional burbarra spices. Still available in their Santa Barbara brewery and tasting room, it has a strong coconut and earth aroma with a rich cinnamon bun flavor that is not to be missed.

Wine-beer: A fusion of the new and old 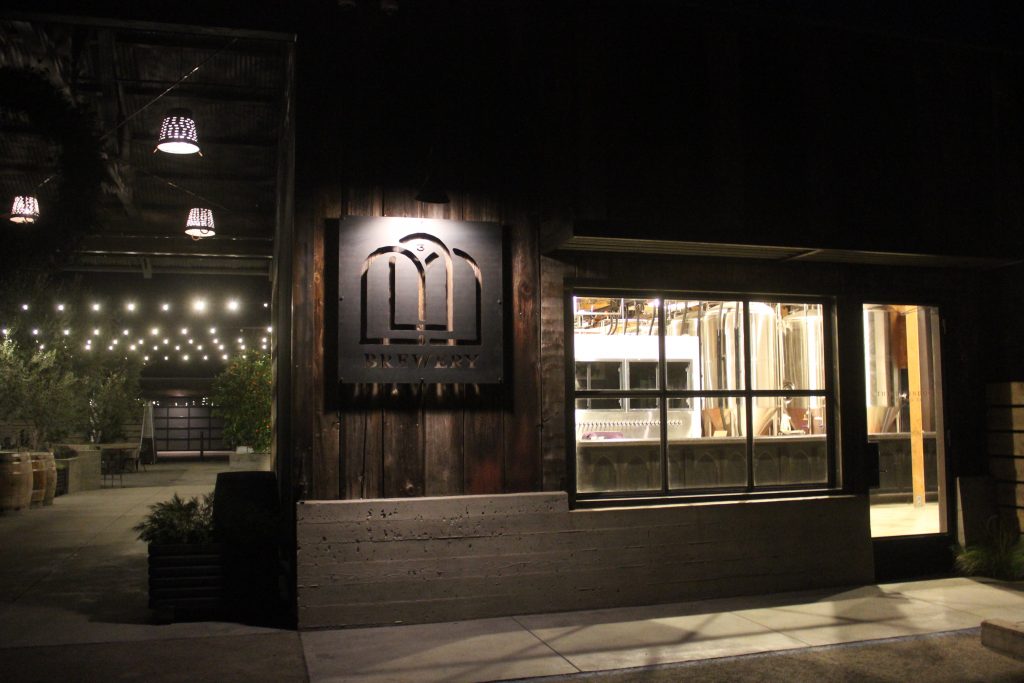 Nearby in Solvang, Buttonwood Winery & Vineyard, is going a completely different direction with the idea of a beer-wine hybrid. Their Hop On white wine actually incorporates hops grown at the winery. This was a natural fit for Buttonwood winemaker Karen Steinwachs, who is both a beer lover and has a family history with beer. Her great-great-grandfather founded the Pabst Brewery. After trying a hopped cider, she began to wonder why she couldn’t do the same with her wine. She wanted to bring all of the complimentary aromatics of hops from her favorite IPAs, but without any of the associated bitterness. It took some experimentation and help with local hop grower Brian DeBolt of Pacific Valley Hops in the Santa Rita Hills, but after some tries she was able to produce a white wine that also captured the essence of hops. The product was so unique that the TTB actually had trouble classifying it. Karen refers to this as easily the most difficult label-approval she has ever experienced. The persistence paid off though, and today Hop On has become one of their more popular products.

The result is a grape blend (93% Sauvignon blanc, 7% Sémillon) that is cold-infused with hops after the wine has undergone fermentation. It is then matured in neutral French oak barrels to smooth out and develop all of the flavors. The original releases explored a range of hop varietals, however the current Hop On is made with estate-grown Cascade and Crystal hops. The sauvignon blanc wine character comes through clearly in its flavors of honey, kiwi, and gooseberry, accented by some of the spicy floral and citrus fruit aromas of grapefruit and orange peel that these hops are famous for. It perfectly marries the the flavors of both wine and hops with a refreshing quality that can attract both the beer and wine drinker. 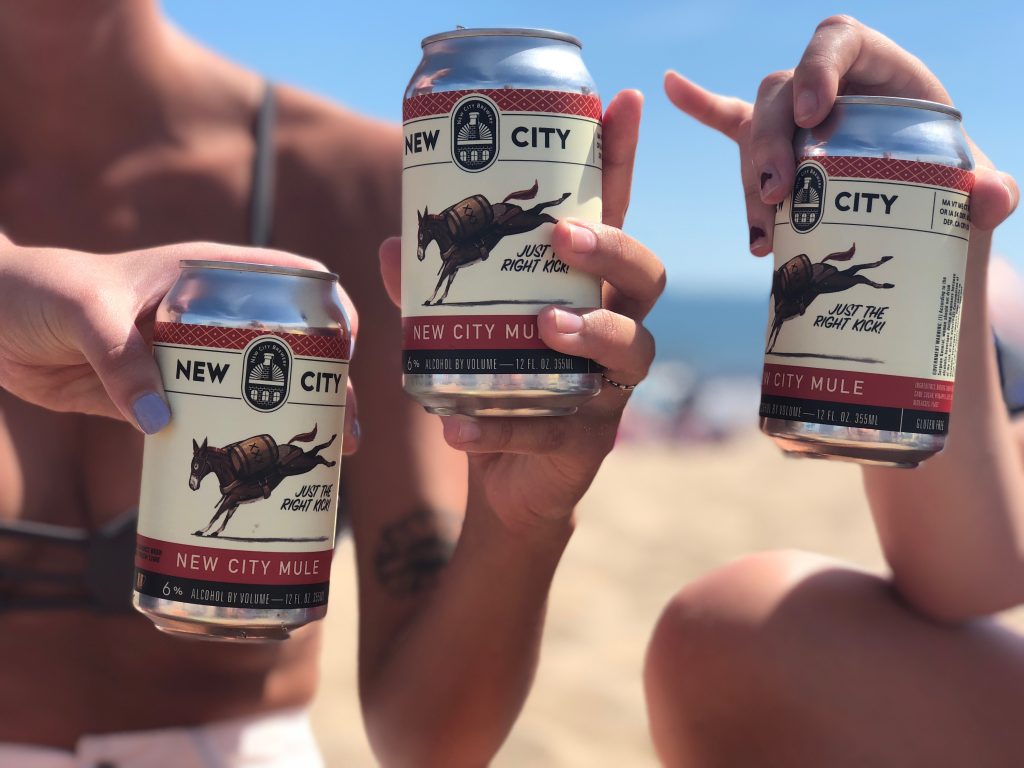 One brewery is developing something new that comes from something old. Before Prohibition, ginger beer was just as popular as regular beer and New City Brewery is trying to resurface that tradition. Their brewery is based in Southampton, Massachusetts, where their special line of ginger beers begin with something even older. The water in Southampton comes from a 10,000 year-old underground glacial lake and is famous for its quality, having been voted “Best Tasting Water” five years in a row by the National Rural Water Association in the Great American Water Taste Test that is held each year in Washington, D.C. “We like to joke that it has taken 10,000 years to make our beer products,” Ray Pierson, co-owner of New City Brewery, chuckles. But that is not the only thing that particular area is known for. The brewery is housed in an old brick factory from the 1880s that specialized in flexible rubber products including tires for Model-T Fords made of cotton woven with latex. When the factory was being built they had to recruit people from all over the region and build a city to house the new employees. The distinctive and historic building provided the perfect name for their blossoming brewery, New City Brewery.

The company is a family affair, being owned by Ray, his son-in-law, Sam Dibble, and two close friends. Sam runs the brewery, while Ray lives with his wife off of the 101 in Ojai, where they self-distribute New City’s ginger brews throughout the area.

They felt that the refreshing bite of this ginger beer perfectly fit the California atmosphere and especially “goes with the Ojai vibes” since it is preservative-free and all natural. Their popular base ginger beer is made from only cane sugar, molasses, lemon, lime juice, and of course, ginger. Quite a bit of it, in fact. Each gallon of their ginger beer used one whole pound of ginger, ground fresh by-hand. When they found that people were using the Ginger Beer to mix into cocktails they decided to explore the possibilities of what their brew could do.

They developed a Moscow Mule version that ends the fermentation a little early and then adds in lime juice in the bottle to give the flavor of the popular cocktail. Ray notes that because the Moscow Mule does not contain any actual vodka, it goes down far smoother than the standard cocktail, and still brings the lively bite of ginger that their products have become known for. They will even soon be releasing a Ginger Beer that uses blood orange juice to add a ripe finish. While these fusion ginger beers may be made on the east coast, they can be found all along the 101, and especially in Ojai. Ray mentions that he is happy to have the brewery grow organically to maintain the quality of their products. 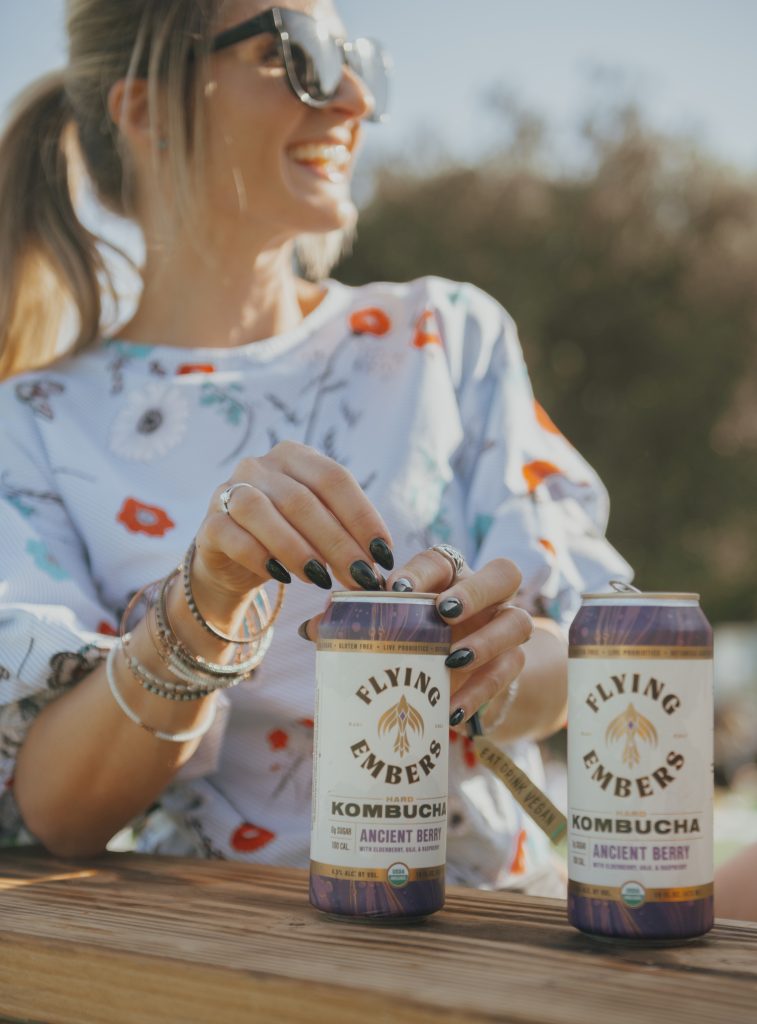 Down in Ventura, Flying Embers is bringing their passion for healthy lifestyle practices and quality ingredients to the world of high-alcohol kombucha. The founder, Bill Moses, has a long history with fermentation and kombucha. He originally founded Kevita, a non-alcoholic kombucha company, that he eventually sold to Pepsi Cola. Healthy living is his ethos and he wanted to bring the health benefits of kombucha next to the hard kombucha category. After founding the experimental laboratory, Fermented Sciences, in his home’s hundred-year-old stone wine cellar, Bill almost lost everything during the Thomas Fire of 2017. His neighbors and surrounding community came together to save their land and laboratory. In honor of the fiery battle they fought, he named the kombucha brewery, Flying Embers.

Today they donate a minimum of 1% of all proceeds toward firefighters and first responders, wanting to be a positive force for change and show their appreciation for everything that these people do. Focusing on health, they use all organic ingredients and guarantee a minimum of 500 million live probiotic counts in every single can. Each product also uses an adaptogen root blend of ginger, astragalus, turmeric, and ashwagandha to promote homeostasis in its drinker. And with flavors like Pineapple Chili or Grapefruit Thyme, each one of their hard kombuchas are aimed to please the palate while also providing the benefits of kombucha.

Whether it’s a beer-wine hybrid, hopped wine, or something entirely different, like a high alcohol kombucha, each of these items fuses the unique flavors found along the 101.