All photos by Misty Hall

the Ojai Valley citrus trees bulge with juicy and delicious oranges, lemons, and Pixie tangerines. But thanks to the valley’s ideal growing conditions, you can find fresh fruit year-round in this corner of Ventura County.

Locals know that when the trees overflow with fruit, so too do the wood-framed farm stands that dot the roads across the valley. “The sweetness of a freshly picked Pixie from a farm stand during Pixie season just can’t be beat,” said Ojai’s James Grigsby. 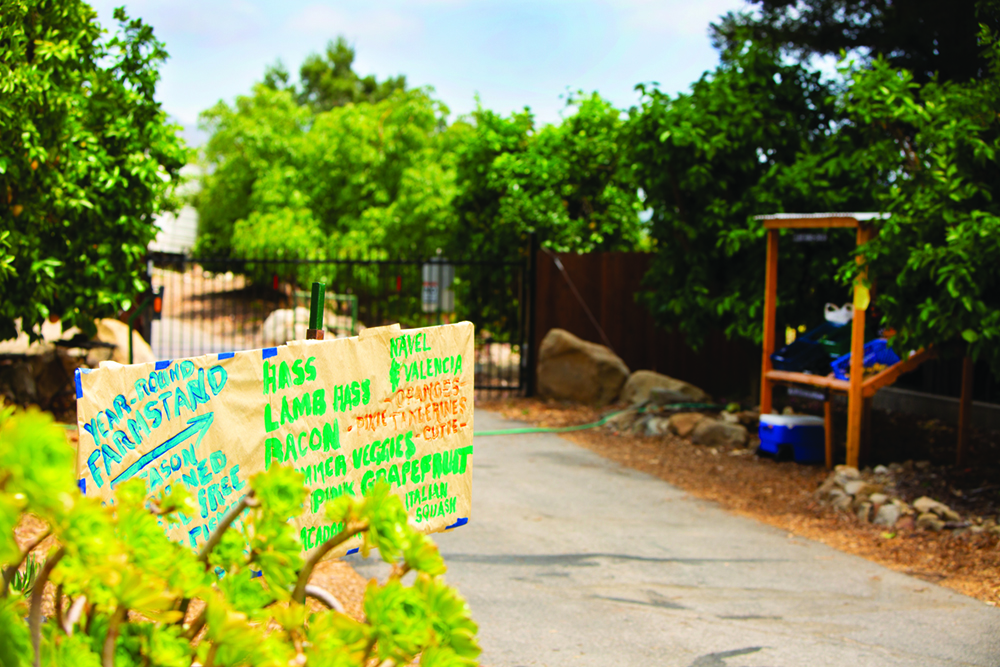 Ojai’s version of a billboard.

He and his partner, Carrie Switzer, admit that they are a product of a very spoiled town. “People who don’t like oranges have never had an orange off a farm stand in Ojai,” said Grigsby. “I have a friend who can’t drink store-bought orange juice because he grew up here.” 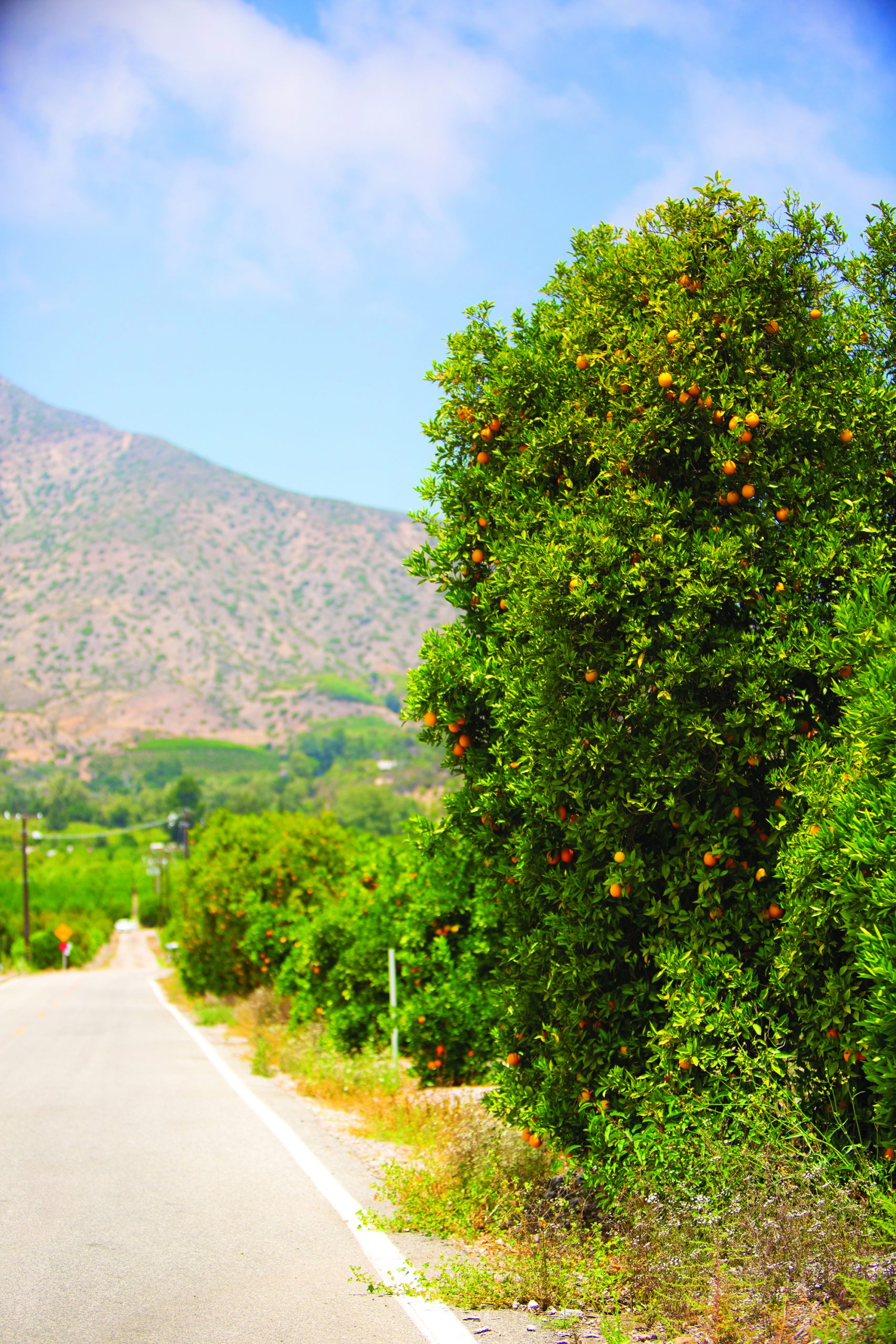 Ojai citrus ripens on trees just a few feet from the farm stands where they’re sold.

This is not a new phenomenon. Since the late 1800s, farming, especially avocados and citrus, has been a major revenue source for Ojai residents. Ojai itself has changed in many ways over the years (think tourism dollars), but the farm stands, luckily, have remained.

The Ojai farm stands are a well-kept secret from passing travelers. From a moving car window, it’s easy to dismiss the haphazard piles of fruit as typical grocery-store produce. But the fruit stored in those hand-built boxes is anything but typical.

Drive up to one and start chatting with a local shopper, and you’ll learn why. Lupe Laura has spent 30 years living in Ojai and raised her kids on the fruit she buys from the farm stands. “I will only buy my fruit at farm stands,” said Laura. “When one is empty, I will just drive to the next one.”

Laura distrusts the quality of store-bought fruit because she has no idea when it was picked or how long and far it traveled to end up on a shelf. But the fruit in these shaded stands is sold just a few feet away from the land where it was harvested — usually on that same day.

Boccali’s Pizza and Pasta in Ojai’s East End also includes a farm stand. Owner DeWayne Boccali is baffled that the saying “farm to table” has been commercialized. He has lived and sold the real farm-to-table experience for decades, creating a thriving restaurant which feeds on the fresh Ojai grown produce that comes straight from Boccali’s 2-acre garden and orchards. What he doesn’t use for the restaurant — or at his own home — ends up on his farm stand. “Real ranch, real farm, real food,” said Boccali. “That’s what you’re getting at the restaurant and the stand.”

Beyond the quality of fruit that you get at farm stands, the abundance of them creates a readily available supply of easily accessible produce at any time. “It’s really a 24-hour local quick mart,” Grigsby pointed out. “You can go out and get a lemon at 3 in the morning. Which is pretty cool!”

During the Covid-19 pandemic, a vast number of people flocked to the farm stands. These tiny outdoor markets provided a much less risky shopping experience — with the added bonus of freshness, of course. Nan Davis, who currently runs her long-time family farm, spent much of her pandemic isolation running wagons of fruit from her orchards to her farm stand. “I was picking anywhere between three and five hours a day,” she said. “I just couldn’t keep the stand full!” 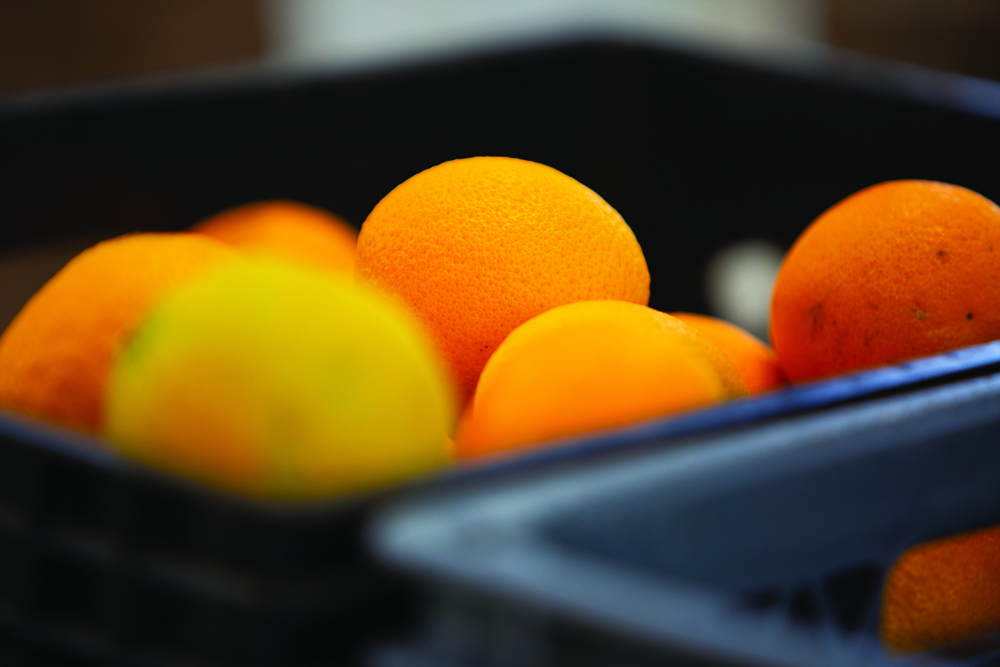 Not surprisingly, the people who bought the fruit and produce for convenience and safety during the pandemic got hooked. Locals and visitors alike come to Davis’s stand for their seasonal fruit fix, she said. “I have an older gentleman, I think he’s probably in his 80s, who drives from Santa Monica for my oranges and when they’re not out, he knocks on my door and he’s like, ‘Uhh hi, I was just wondering, do you have them?’” Davis recalled, giggling.

The majority of farms in Ojai get picked commercially and their produce is sold around the world, but there is always excess produce. The farm stands have given an opportunity for farmers to see all of their produce sold and enjoyed, said Ojai farmer and school administrator, Tracy Wilson. 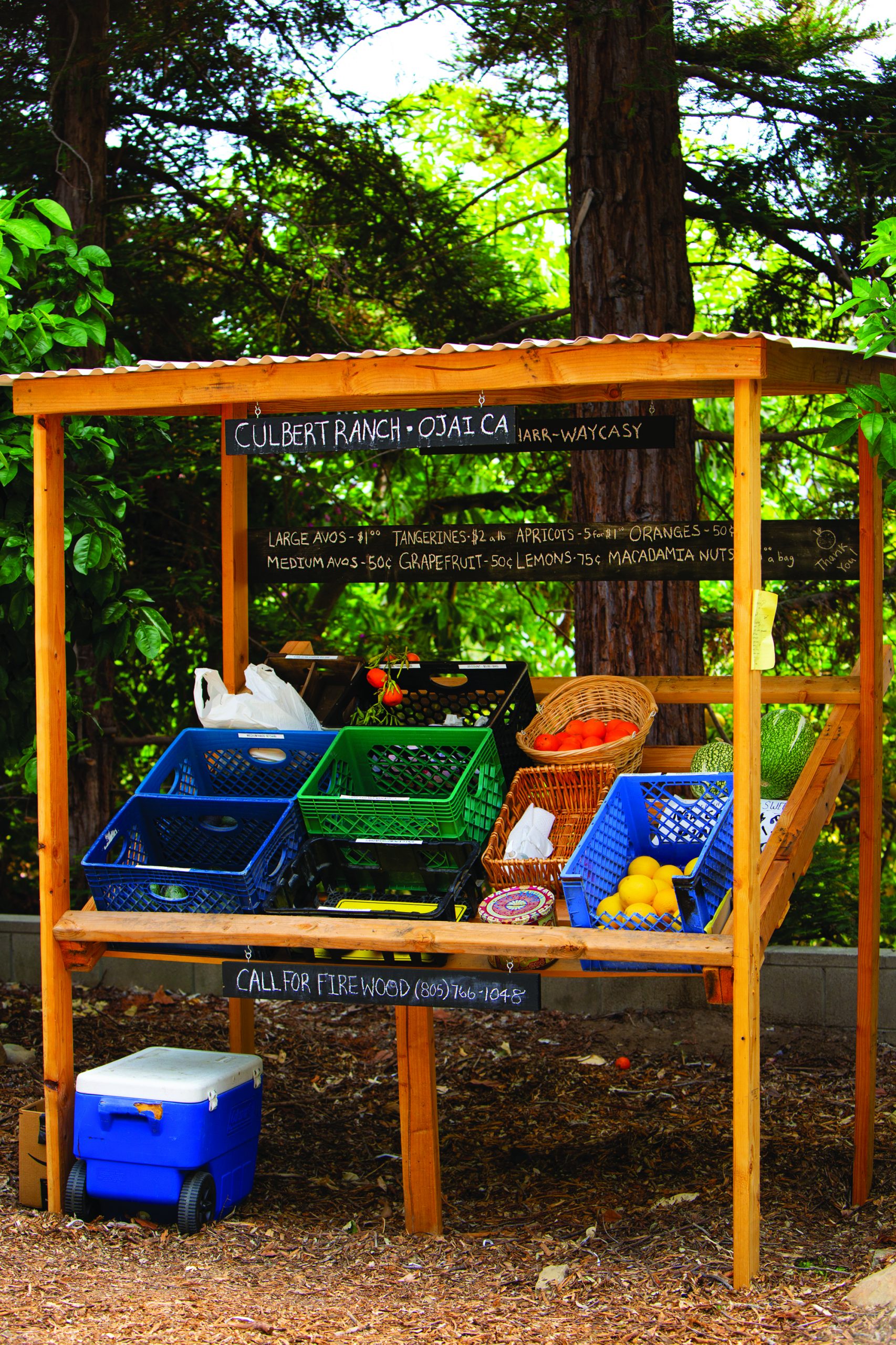 You never know what might pop up on these wooden stands.

Wilson owns and manages a 100-acre ranch that commercially sells oranges, lemons, and avocados. Farming is a tricky business; wind, drought, and the economy can affect sales from one year to the next, she said. “There are times when you don’t know if your fruit is going to make it to market,” said Wilson. “There is something reliable about the fact that you can always put it out on your own farm stand and have control over how much you’re gonna get and how much you’re going to sell.”

Although much of what can be found on Ojai’s farm stands is seasonal fruit, visitors can also often find eggs, flowers, honey, vegetables, and more. On Gridley Road, a purple, blue, and green painted stand sits on the side of the road and is filled not only with fruit, but an abundance of flower bunches and bulbs when the season is right. The owner, Rick Brooks, has found a passion for growing not only fruit and vegetables in his garden, but also tulips, lavender, oriental lilies, and more.

Brooks has also created the idea to cater his gardening skills to what folks want. “I made a chalkboard to put out there that says, ‘Is there anything that you want me to grow?’ If people have comments of what they would like to eat in particular, I could grow what people wanted,” said Brooks.

It is this sense of community that sits at the heart of these farm stands. Although visitors might not meet the farmer in person when they pull up to a stand, there is an implicit connection between seller and buyer. And that connection extends to the little wooden chests and rusted metal boxes attached to the stands to collect money. The customers are expected to pay through the honesty system. 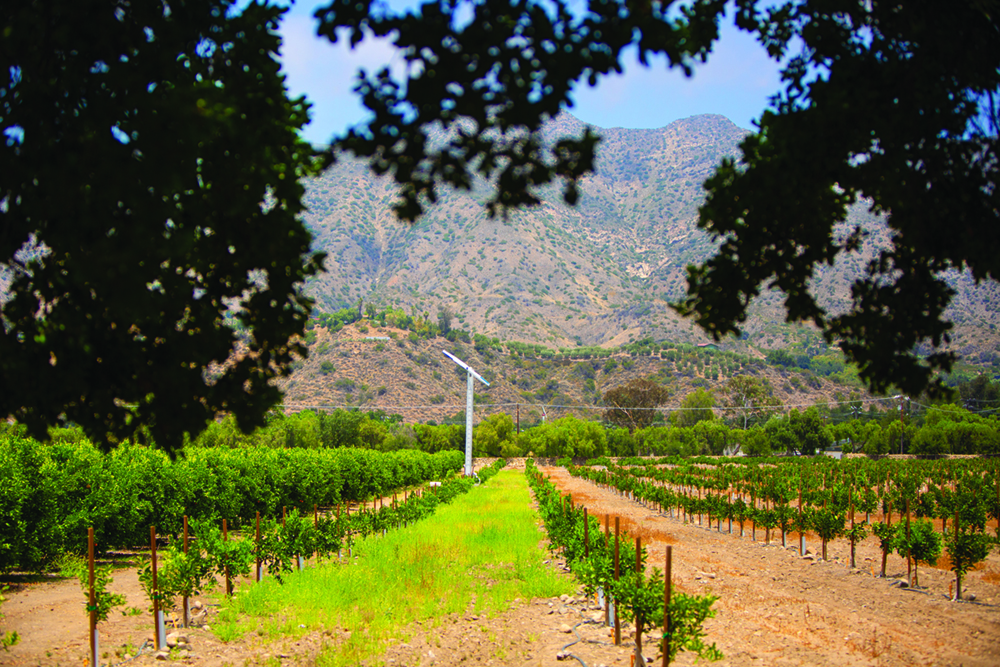 New Ojai residents often wonder why there are helicopters flying over the orchards on cold winter nights. It’s not helicopters, but wind machines, keeping the warm air low to protect the fruit that will soon fill farm stands across the valley.

“One of my customers from L.A. was laughing and said he couldn’t believe it’s an honor system. He goes, ‘This wouldn’t last an hour on my street,’” said Davis. “I think that a part of Ojai is the honesty and sincerity of the community.”

Across the street from Davis’s stand on Grand Avenue is the stand owned by Brian Whitaker. Unlike many other farm stands, his does not hang a sign of prices but a sign that reads in bold letters: Take what you need and pay what you can.

Although most farm stands list prices for their fruit, the farmers all embody the same giving spirit. Wilson recalled neighbors not having money on-hand but needing an avocado for dinner. Her response? “Of course, take it and pay whenever you can.”

“There’s something really heartening in this day and age, that there’s such a level of trust,” said Wilson. “Whether you’re a tourist or a local, we’ve never ever had a problem with anyone stealing.” Other farmers shared that sentiment, saying that stealing happens rarely — and when it does happen, people don’t go for the money, but the fresh fruit.

For those wishing to visit these hidden gems sprinkled around the valley, the best place to start is on Grand Avenue where you can find about eight farm stands tucked on the edge of the road or just inside driveways. But if you happen to find yourself in the Ojai area, do yourself a favor and explore the quiet roads around the edges of the valley, particularly in the East End. You’re sure to be delighted by the fruits of your labor.