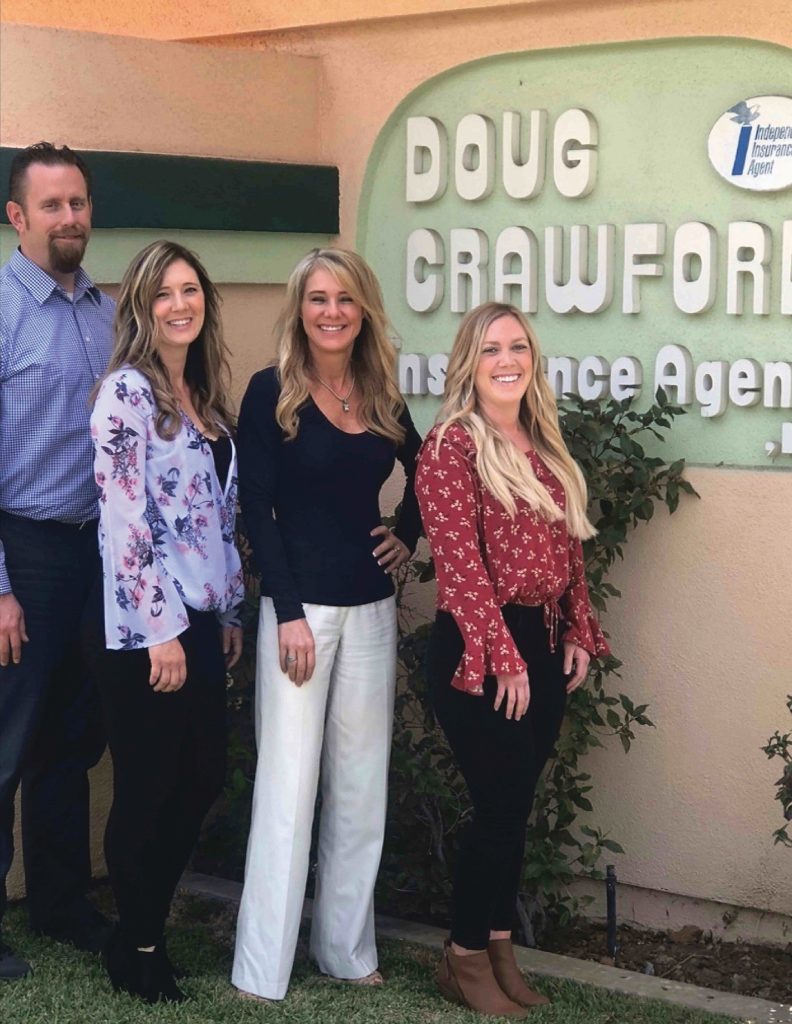 It’s been almost a year and a half since the Thomas Fire devastated a huge swath of land across Ventura and Santa Barbara counties. Those of us who live in the area still remember all too well the fear, the uncertainty, and for many, the devastation, it brought. But while thousands of us evacuated in those early days of December 2017, Charlene and Bryan Crawford stayed put. Despite mandatory evacuations that covered most of the Ojai Valley and surrounding regions, the owners/brokers at Doug Crawford Insurance Agency still clocked in, fielding countless calls from clients worried about their homes, cars, businesses, their futures. Even when Bryan eventually evacuated with his family, he took his computer systems and phone with him, staying in touch with clients.

It was the biggest single event the brother-sister team has ever encountered in their decades as brokers. “Every single phone call, all day long, it was nothing but those calls,” Charlene said. “We just had to be there for our clients.” And there were a lot of them who needed help. “I’d say 50 percent of our clients, at least, filed a claim,” said Charlene. “And about 90 percent of our business clients filed claims — most for loss of business income.”

That dedication to their clients is the foundation upon which their dad, Doug, founded the Doug Crawford Insurance Agency in 1971. “That’s just how our dad trained us. Customer service is the biggest thing,” said Charlene, who joined her dad in 1986. She started working there as a clerk, at the age of 16. After attending classes at Buena High in Ventura, she’d head up to her dad’s Ojai office. Once she graduated, she got her broker’s license. Bryan, who is the younger of the two, would follow 10 years later, getting his broker’s license in 1996 after a stint in retail.

Today, 19 years after their dad retired, the Crawfords still do the same thing Doug did, only on an expanded level. They’ve added another broker, Jessica Manning, and a receptionist, Makenzie Hardman. They now work with more than 40 carriers for just about every kind of insurance you can think of — personal, home, auto, life, health, business, worker’s comp, etc. As they like to put it, “If it’s insurance, we write it!” Charlene expanded: “You don’t have to go anywhere else. That’s a big bonus. It’s all in one place.” In other words, you don’t necessarily need different companies for different types of insurance; just call the Crawfords and they’ll take care of it all. Another bonus: If your insurance carrier raises your rates, decides not to renew your policy, or otherwise changes things in a way that doesn’t work for you, the Crawfords have your back. “We do all the shopping for you. You don’t have to spend your time or hard-earned money doing it yourself,” Charlene pointed out. That seems especially helpful nowadays, when the Thomas Fire and other regional events have drastically impacted in the insurance world. “There have been some huge rate increases,” Charlene said, “and some companies are not renewing (policies). So, we have to requote it with a new carrier. Sometimes, we can’t rewrite … and sometimes, people can’t afford that increase.” So, what then? The Crawfords go on the hunt for other options. “We’ll say, ‘OK, let’s increase your deductible, or maybe you have extra bells and whistles you don’t need right now. We’re making changes to offset the premium increases.”

Sometimes — as in the case with wildfires — you can’t avoid filing claims, and big policy changes will inevitably follow. But there are some simple things the Crawfords share with their clients to keep things running as smoothly as possible. Filing more than three claims in a year could be grounds for a nonrenewal, Charlene said. Take a stolen bike, for example. Just because the theft is covered under your policy, it doesn’t necessarily mean it’s a good idea to file a claim — especially if you’ve already had a claim or two recently. “Call us first,” urged Charlene.

There are lots of other things the Crawfords urge their clients to do and consider when purchasing insurance. Here are their top tips:

• Bundling multiple insurance types can save a lot of money. (And hey, it’s also pretty convenient having only one bill to pay.)

• Homeowners insurance covers a lot, but not everything. You’ll want to consider flood and earthquake insurance — which, yes, are separate things — and perhaps umbrella insurance to give you extra padding for unanticipated needs.

• Younger folks just starting out might not think they need more than auto and health insurance. But renter’s insurance is surprisingly affordable, especially when it’s bundled with other insurance. “People don’t realize, even young people, that you accumulate a lot of stuff!” Charlene said. “It could be $50,000, $75,000 worth of stuff — your clothes, computers, pots and pans, what’s in your garage, your tools, everything! … When it’s gone, it’s gone.”

• Keep important documents somewhere other than in your home/business — either online in the cloud, in a safety deposit box, or at least, in a fireproof safe or box.

• It seems like a pain, but keeping receipts and writing down serial numbers for your belongings is very important. (And, as in the above tip, keep that stuff offsite.) “If you’ve never had to file a claim, you might not understand the process,” Charlene said. But documentation is the only way to prove what you owned before it was damaged, stolen, and/or destroyed.

• Take photos and videos of your belongings. It can be hugely helpful to “Just scan the walls, the things you have in each room,” said Charlene. And it’s worth noting again: keep that documentation offsite!