The Spirit of the Central Coast: Craft distilling along the 101

With the rich agriculture and lush landscapes lining U.S. Highway 101, it’s no wonder that the wineries and breweries along the way have become known worldwide. With about 20 craft distilleries dotting the 101 between Camarillo and Paso Robles, there is now a whole new group of craftspeople capturing the spirit of these cities and putting these regions on the craft distilling map. Although distillery tasting rooms are currently limited to only serving 1 1/2 oz per person, always remember that liquor is much stronger than beer or wine. Never drink and drive.

Fortunately the distilleries along the 101 will take you on a ride. 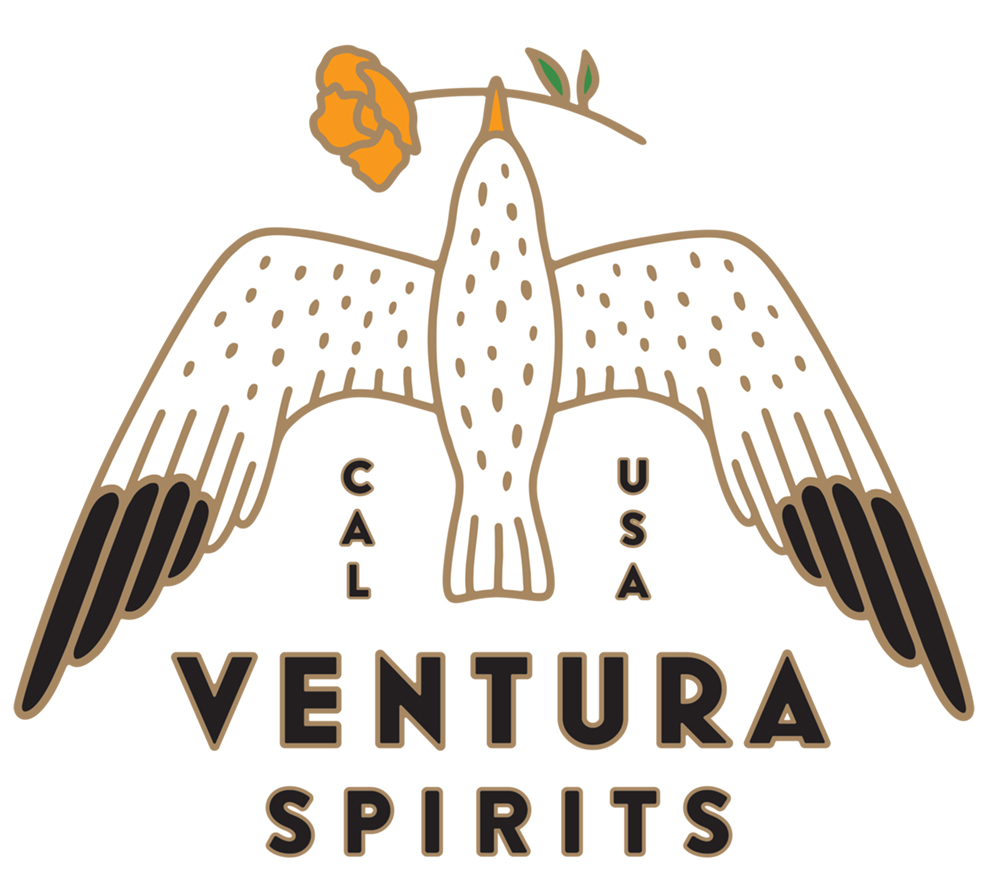 Just off Hwy 101 and a short drive up SR-33 lies a large  warehouse painted with swaths of sky blue. Off to the side, a large ramp leads down past a mural of Ventura Spirits’ bold logo to their festive tasting room. While many college students may spend time thinking about liquor in college, two engineering students, Andrew Caspary and Henry Tarmy in particular, thought about it is as a solution for a school assignment. Their project looked at using a distillery as a way of dealing with excess agricultural waste. Many farmers have to throw out “secondary” fruit that is not aesthetically pleasing, but perfectly fine otherwise. Both had a lifelong fascination with distilling, and the idea stuck. Andrew’s brother, Anthony, was an industrial designer and Henry’s brother-in-law, James Greenspun, was a package designer. It was a natural fit for this team of family and friends, and together they formed Ventura Spirits. 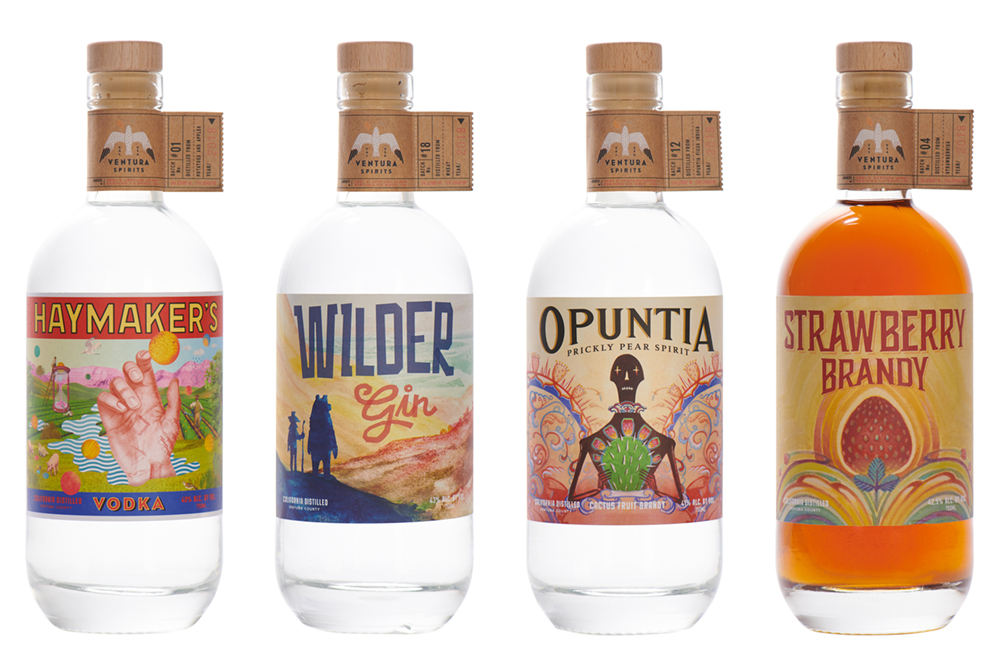 Ventura Spirits brought the skills of several friends and family members together to create a distinctive selection of spirits. (Photo courtesy of Ventura Spirits)

To this day, they stay true to the intent of that college project. Not far from the distillery lie the expansive strawberry fields of Oxnard. Knowing that during harvest many farmers often need help off-loading secondary strawberries, they planned a strawberry vodka for their initial launch. Those strawberries are now used to produce their gentle yet firm brandy that is aged for two years in French oak. Ventura Spirits’ new vodka, Haymaker’s, uses excess potatoes and apples in a 50-50 blend to produce a zippy vodka with a hint of earth in the nose and a dash of apple that brightens up the neutral spirit. Their whole team has a love for nature and harvesting wild botanics. The Wilder’s Gin turns this passion for foraged botanics into a gin with its own spirit and a minty finish, balancing the wild and cultivated with exotic flavors that highlight the diverse flora of the central coast. Or as James puts it, “We want to take the natural elements of our environment and distill them down.”

The New and Old in Santa Barbara and Beyond

In Santa Barbara’s popular Funk Zone lies a small tasting room, where a window looks in on a busy workshop piled to the ceiling with bottles, crates, and equipment. This is Cutler Artisan Spirits, and its namesake distiller Ian Cutler will sometimes be in the front room leading a tasting — but more often than not, he can be seen through the window, toiling away tirelessly in back. Ian seems almost born to be a distiller. In fact, he is the fourth generation of his family to go into the trade. His great-grandfather was an (alleged) bootlegger during Prohibition, and Ian pursued geology in college. He will happily discuss the mineral content of water for vodka or the chemistry of various terpene compounds. Ian opened the distillery in 2013 and since then his line of whiskies, gin, and vodka have won a range of awards, becoming known for their sophisticated yet clean and balanced flavor profiles. 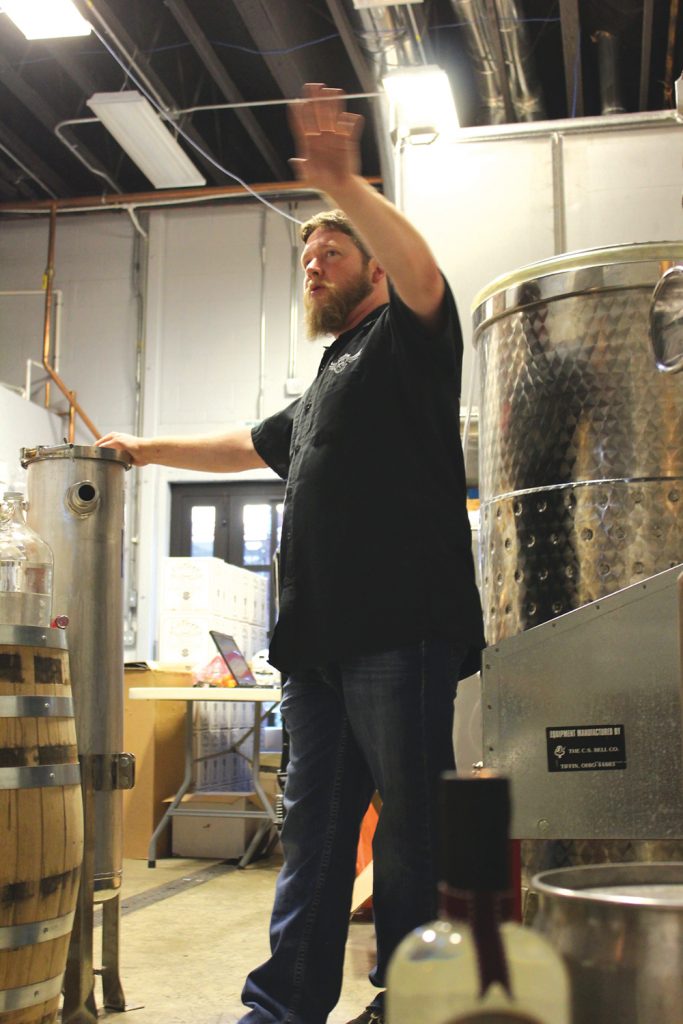 Ian Cutler is a multi-generational distiller with a wealth of knowledge. (Photo by Zachary Rosen)

More recently, he installed a continuous still and new charcoal filter towers to begin producing a vodka that will be available nationwide. It’s one of several new endeavors he has undertaken, including a completely new line of spirits that will soon be announced. This new line will have more approachable flavors and price than his standard range of spirits. Of course, his original line of spirits remain classics. His Grandma Tommie’s Apple Pie Liqueur is a family recipe and combines Ian’s vodka with fresh apple juice and organic cinnamon and vanilla, along with a secret blend of other spices. It makes the perfect ingredient for a range of fall drinks with its ripe apple flavor, hint of sweetness, and warming buzz of spices.

In nearby Goleta, the university and growth of tech companies are fueling a vibrant new culture to support the expanding industry of the area. In a large industrial park, through a quirky hallway you can find one of the area’s newest additions, Goleta Red Distilling. Open for about a year and a half now, it is run by founder and head tinkerer, Michael Craig. This is his newest profession, but in the past Michael says he has done a “million different things.” He was a potter for years, which sparked his interest in chemistry, even owning a pottery store and teaching classes. Later, he worked for 25 years with adults with developmental difficulties, feeling that that work was a life calling. Michael knew he was ready to retire from that line of work, though, and began thinking of his next life calling. He started homebrewing as a way of unwinding from the stress of his humanitarian work. Brewing naturally led to an interest in distilling. However, the seed was first planted at age 14, when he experimented with distillation in an advanced science class. And after doing the math and seeing that it was practical to open a distillery, he began down the path. It took him a few years to find a building and set up the space, but it’s now really beginning to take off. 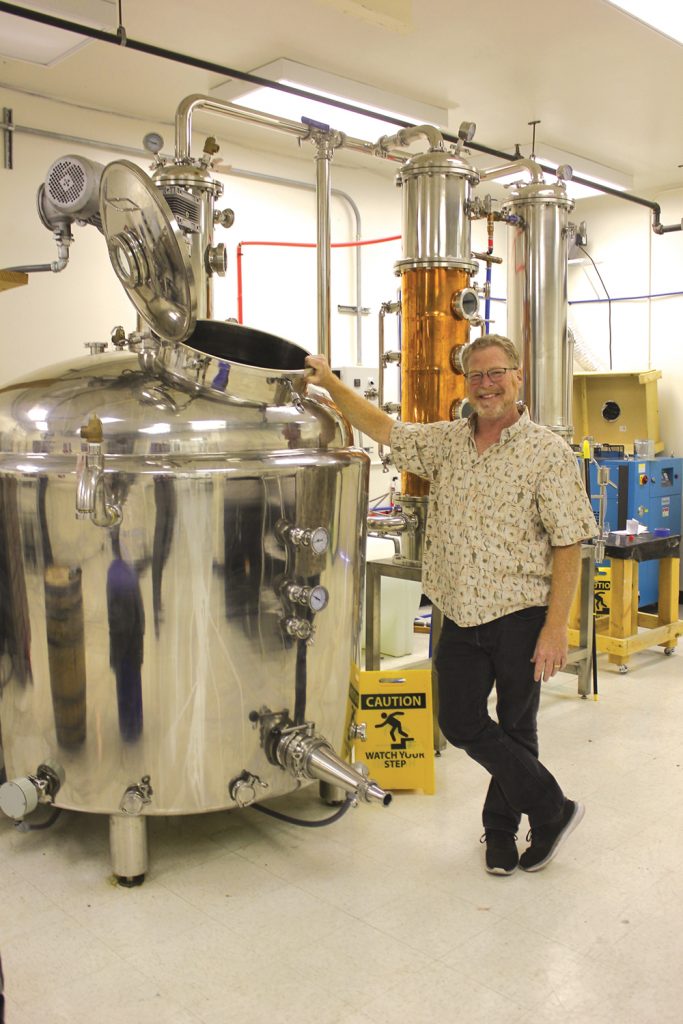 At just under two years old, Goleta Red is the new to the craft distilling scene. (Photo by Zachary Rosen)

Michael uses mostly molasses and raw turbinado sugar, sourced from a small Louisiana farm, to produce his spirits. This means that there is a large focus on rum in the distillery. The unaged Sterling Silver is a white rum with a smooth vanilla and banana flavor, followed by a touch of grass and hay in the finish. The Solid Gold is produced by aging the rum on American white oak cubes, which imparts a slightly peach color to the liquid that complements the toasted cinnamon aroma and gentle honey sweet warmth on the palate. In addition, Michael produces several specialty rums, including one aged on cacao nibs to give it a dry finish of peppered earth, raisin, and cocoa.

Beyond his well-rounded rum offerings, Michael offers a fresh, flowery gin and a smooth agave spirit with a cantaloupe-like sweetness. There are new projects in the works, too, like an amaro and a barrel-rested gin. Naturally, it is best to swing by the tasting room to see what new treats he has in store.

Heading north on the 101, you reach the rolling hills and lush landscapes of Paso Robles. This area is known worldwide for its wines. Several of these wineries have begun to produce spirits that capture the essence of these renowned grapes. There is now even a Paso Robles Distillery Trail. Traveling along this path, you can find nine different distilleries around Paso Robles. At the top of the route lies In Vino Veritas Custom Crush Winery which also houses Azeo Distillery. A “custom crush” facility is where people can commission their very own beer, wine, or cider, using the equipment and resources of the facility. Now, inevitably, not all of these projects are seen to completion by their owners — and this was the problem that In Vino Veritas’ full time resident winemaker, David Vondrasek, was trying to address when he and the other owners opened up Azeo Distillery. This attached distillery, located in the custom crush facility, now brings new life to these abandoned projects. 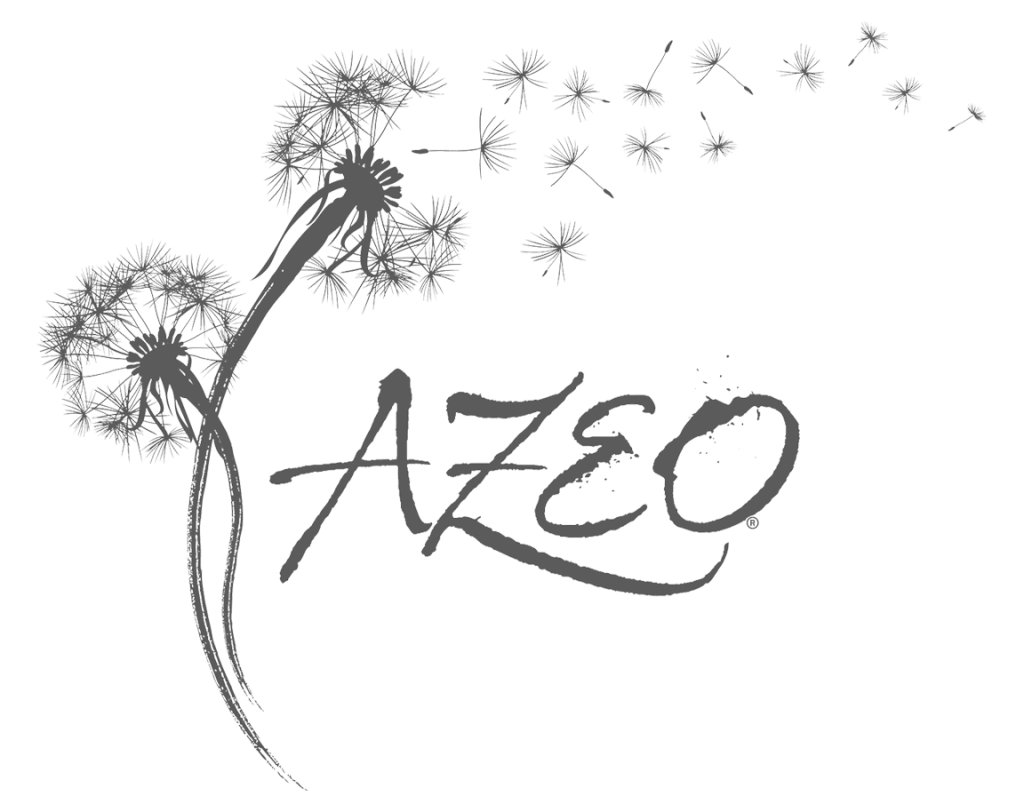 While some of these abandoned projects may no longer fit their intended product, they were still perfect for distilling. They became the original batches of grape-based vodka that Azeo now produces. David also makes an apple-based vodka, and uses both of these vodkas as a base for their own respective brandies. He feels that brandy hasn’t had a big revival like gin and some of the other spirits, but hopes that these two can help restore people’s interest in fine brandy. In contrast, the boozy moonshine they produce is just for fun; they even put it in a special brown bag-lined bottle. 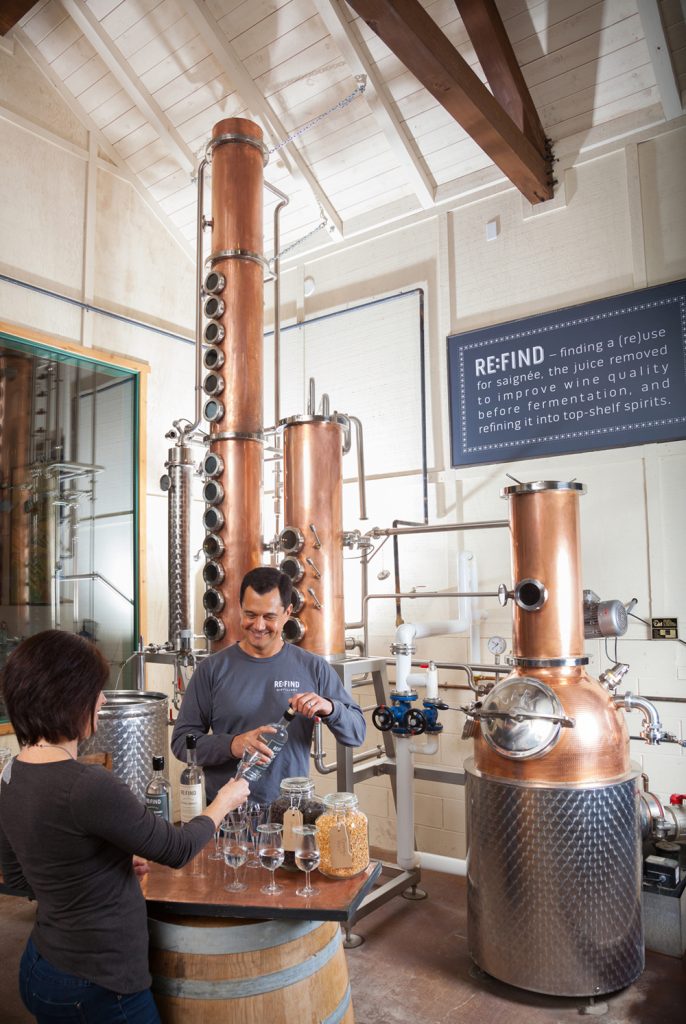 Alex Villicana pours some RE:FIND in the tasting room. (Photo courtesy of RE:FIND)

Easily the largest of the Paso Robles distilleries is RE:FIND Handcrafted Spirits, which sits next to their associated winery, Villicana Winery. The winery was opened in 1993 by husband and wife team, Alex and Monica Villicana. They built the vineyard themselves, even digging each hole by hand. When making their wines they will remove 10 to 30 percent of the free run juice (saignée) to help increase the contact between the liquid and grape skins. This helps the wine extract more flavor and color during fermentation. The removed juice would normally go to waste; however, Monica and Alex wanted to find another use for it. A distillery seemed like a natural fit, and in 2011 they opened up RE:FIND, the first craft distillery in the area. Today, they use more of the saignée than they can produce, so they buy the excess juice from other Paso Robles wineries to keep up with demand. By Monica’s calculations, they use enough of this excess juice to reclaim a 60-acre vineyard, not just recovering the grape juice that would’ve gone to waste but all of the energy and water it took to grow them, as well.

The high quality grapes they use in the distillery means that their base vodka has a naturally high glycerin content. This gives it a fuller body and a perfumey finish. Whether it is in the winery or distillery, Monica is conscious about reusage and waste. Their barrels, on average, are used three times before being passed on to craft brewers. The barrels first house their bourbon batches before being used to age their rye whiskey. The esteemed Firestone Walker Brewing Co. is nearby and produces special proprietary base “beers” for their whiskies. The final barrel rest is used to produce RE:FIND’s unique Barrel.

Monica remains dedicated to being local and hands-on with their approach to both the winery and distillery. RE:FIND produces several seasonal products that each highlight a local crop. Springtime brings the fresh flavors of their Limoncello Liqueur. The heat of summer is lightened by the refreshing taste of their Cucumber Flavored Vodka. Just in time for the crispness of fall and winter’s calm is the release of their feisty Kumquat Liqueur. One of their exciting new products will be a self-described “Paso Robles Whiskey,” made entirely from locally grown and malted spring wheat aged in wine barrels. 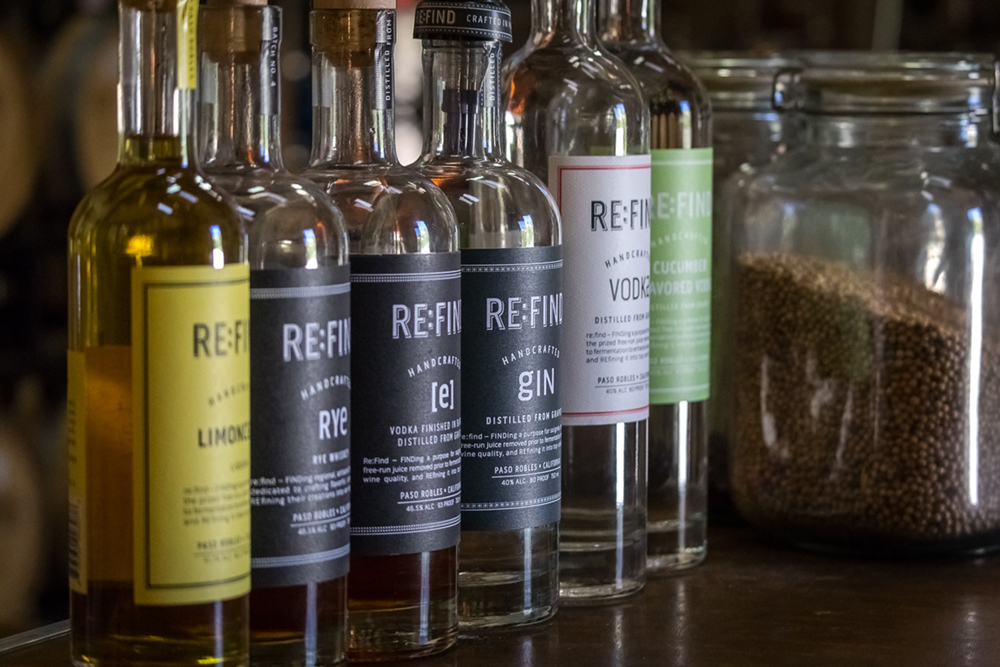 For those visiting the distillery, Monica focuses on education and hopes to demystify the world of spirits. Spirits, she explains, are just another form of “agricultural product.” Each one takes fruit, grain, or sugar, and captures the essence of both the source and its surroundings.

And whether it is revived wines, wasted juice, or heirloom recipes, each of these distilleries captures the spirit of the Central Coast, and celebrates the diverse landscape found along the 101.