Let’s be clear:   We know condors are not attractive birds. Some might even call them ugly. But what they lack in beauty, they more than make up for in size, cultural significance, and an epic tale of recovery.

With a wingspan of nearly 10 feet, the California condor is the largest native bird in North America. Fortunately, condors pose no danger to humans or any other living thing. They are carrion eaters, feeding only on animals that have died. As such, they are considered part of “nature’s clean-up crew.”

Fossil records of condors date back more than 10,000 years. Due to the loud whooshing sound the feathers make in flight, some historians believe the condor may have been the mythical “Thunderbird” depicted in Native American art and symbolism. Even today, condors hold an important role in Native American cultures and traditions.

Condors once ranged throughout the western states, but in the 1900s their numbers dwindled rapidly due to hunting, habitat destruction, and egg theft by humans. By the 1980s, only 22 condors remained in the wild. An ambitious California Condor recovery plan was launched by the U.S.  Fish and Wildlife Service to capture all the remaining condors and breed them in captivity. Once condor numbers increased, they would be released back into the wild. The plan worked, and in 1997, the first captive-bred condors were released into the Big Sur 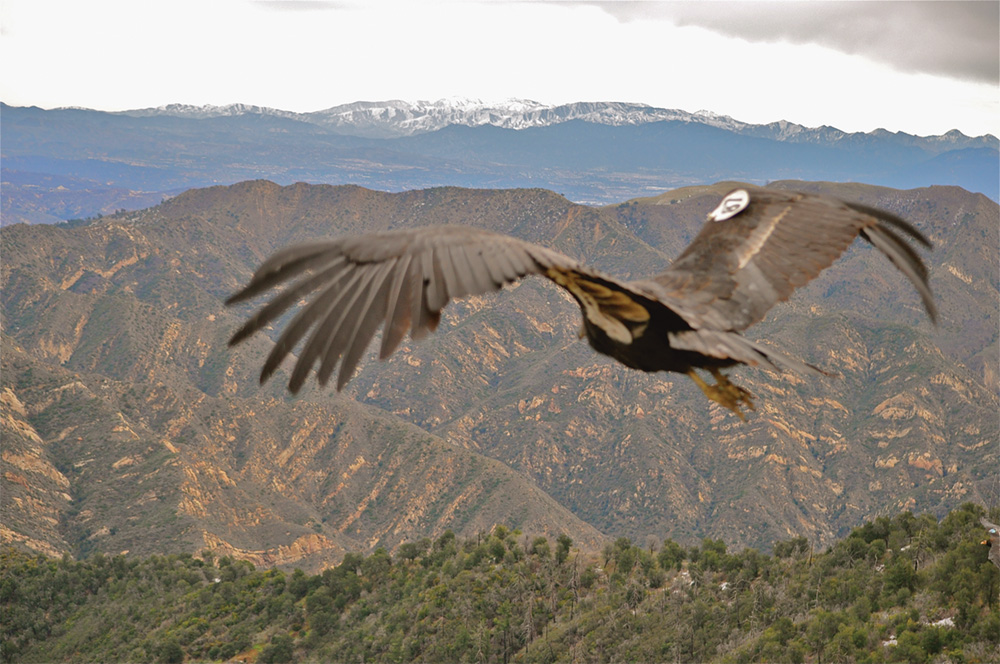 Photo by Kim Valverde/National Park Service Hopper Mountain, located in the rugged backcountry of the Central Coast, is home to a growing population of condors.

Wilderness. Other release sites were added, and now there are more than 500 condors flying wild throughout a portion of their former range. Much of Central and Southern California is now considered part of condor country, including the mountains of Ventura, Santa Barbara, and San Luis Obispo counties. There are a number of sanctuaries – most of which are off-limits to the public – across the region, such as the Sespe Condor Sanctuary, Hopper Mountain National Wildlife Refuge,  and Hi Mountain. 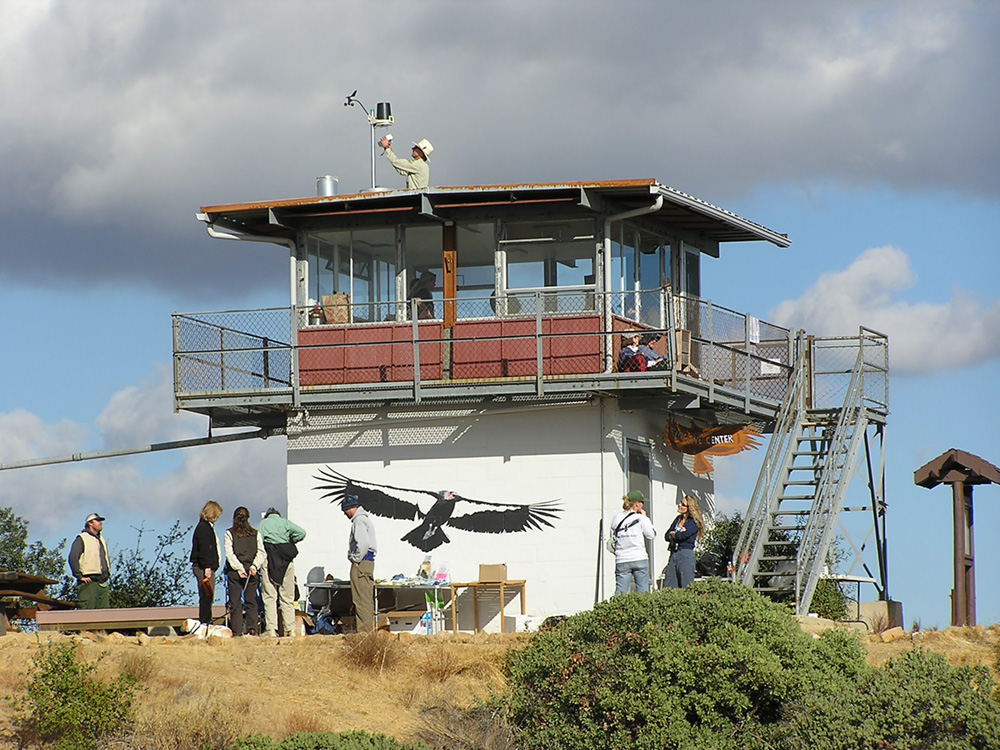 We are accustomed to seeing the condor’s smaller cousin, the turkey vulture, scavenging along the highway and spiraling up thermal air currents in the sky. Besides the size difference – which can be difficult to determine at a distance – turkey vultures can be distinguished from condors in other ways. As the National Park Service puts it, “If you’re viewing the birds from below, you’ll notice the adult condor’s striking white triangle on the leading edge of the underside of their wings. (This patch is more     of a mottled gray color in juvenile condors.) Turkey vultures, on the other hand, have silver-gray colored feathers on the trailing edge of the underside of their wings.” Both birds have featherless heads, but the turkey vulture’s head is red, compared to the condor’s pinkish head.

Photo by TC Perch Even from a distance, tags make California condors easily distinguishable from their smaller relatives, the turkey vultures.

Perhaps the most significant identifying feature on every condor, though, is a large colored tag attached to the wing. This allows researchers to identify them visually. Many condors also have a satellite antenna attached to the tag, so biologists can follow and track them using GPS technology. This is essential, as condors frequently travel more than 100 miles in a day.

Condors are social animals and often join up with other condors for a few days, eventually returning to their home base. They nest in rugged, remote areas, often in cliffside caves or cavities in tall trees. Egg incubation lasts about two months, with both parents sharing the duties of protecting and warming the egg. Chicks learn to fly at about six months, although a chick will usually stay with the parents for at least a year.
Ironically, the largest bird is often compared to one of the smallest. Condors are sometimes considered the proverbial “canary in the coal mine.” Their near-extinction is attributed to many different types of environmental hazards. The use of DDT, an agricultural pesticide that leaked into the natural food chain, caused the shells of bird eggs to be so thin they cracked, killing the unborn chicks. Lead ammunition has also been documented as being consumed by condors when feeding on the carcasses of animals that had previously been shot.

Photo courtesy of NOAA Condors are social animals and often join up with other condors for a few days.

According to the United States Department of the Interior, there have been 76 confirmed lead mortalities in wild condors between 1992 and 2017. In 2013, California became the first state to enact legislation banning the use of lead ammunition; that law went into full effect in 2019.
Microtrash, too, has posed a threat to condors. To supplement their chicks’ diet with calcium, condor parents feed small bone fragments to their offspring. Plastic litter, cigarette filters, and bottle caps are mistaken as bone chips and fed to chicks, damaging their digestive tracts.

The story of the condor’s recovery from near-certain extinction has made it a subject of curiosity and interest. Volunteers assist researchers in tracking and monitoring individual birds and nests, checking sick condors for lead poisoning, and assisting with public education. Several organizations offer “Condor Cams” – cameras installed near release sanctuaries or nesting areas – that can be viewed from their websites.

Both the Santa Barbara Zoo and the California Living Desert in Bakersfield are part of the ongoing captive breeding program. Their captive condors can be seen “up-close” in zoo enclosures and flight cages. Like the condor itself, the people who contribute to saving the species have a great vision for the future.

Michele Roest is a biologist and naturalist with a lifelong love for California’s Central Coast.