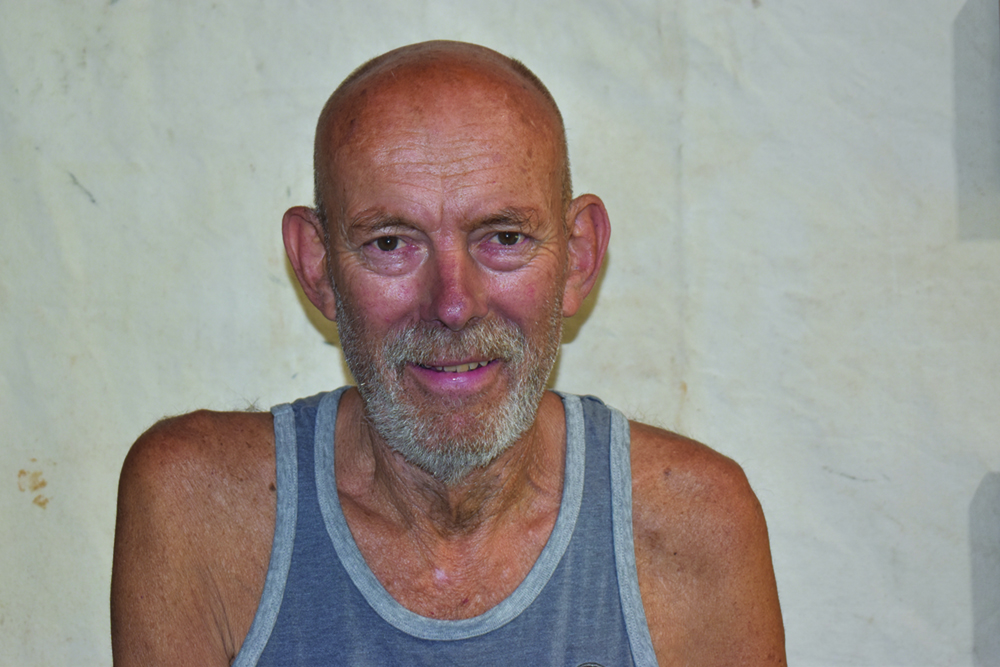 The blacksmith trade dates back to 1500 BC. The craft has evolved dramatically since then, and pieces forged today in 2,000-degree heat have changed from simply utilitarian metalwork to works of art.

Santa Maria blacksmith Hans Duus has been honing his craft and creating iron pieces rooted in tradition, the art of handcraft and a love of metalworking. For the last 54 years, he’s melded modern technology and engineering into a wide variety of projects, with a specialty in light fixtures. Although he started his first forge in Buellton in 1982, these days, he can be found further north.

Duus recently worked on a project for a hotel that meant hanging very large iron chandeliers throughout the building. “How do you safely hang something that weighs 2,500 lbs. over someone’s head?” he asked. “And how do you make it look like it’s floating in air?” His work today requires an understanding of engineering in addition to managing the hot forge and working the metal to match the design he has in mind. 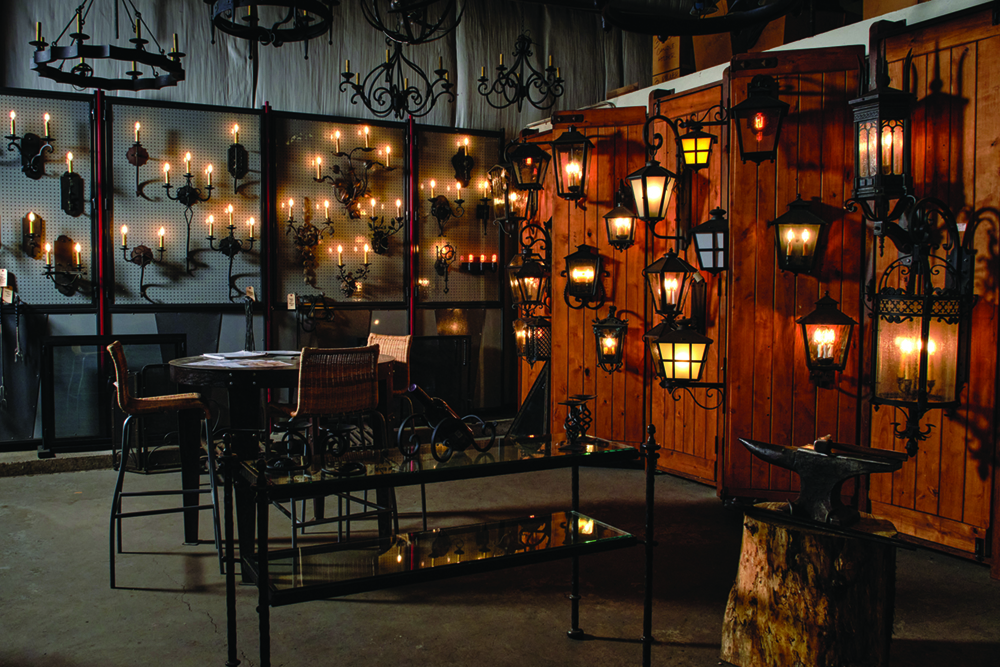 Duus specializes in lighting fixtures of all sizes.

Those extremely high temperatures are needed to change the steadfast black metal into a pliable medium he can twist, pull, mold, and braid into various shapes and designs. Working with hot metal is a dynamic process. “Because you think of metal as being this immovable object, you get it up to a couple thousand degrees and it goes into a plastic state.” The iron begins to move, he said. “It stretches and compresses, bends and just about does almost anything you want it to, if you know what you’re doing.” 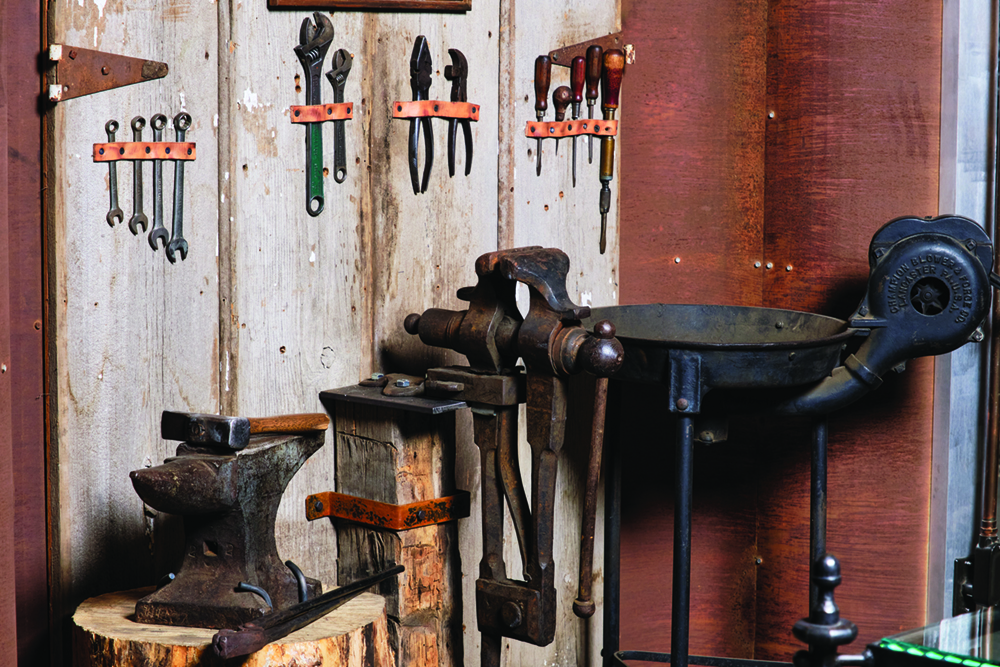 A display of antique tools hearkens back to the old-fashioned way of doing things — ways which Duus was taught when he first started out.

One look at the incredible designs he creates, from modern and chic to rustic and Old West, and you know he’s a master of the craft. His fixtures have a signature hand-forged look. 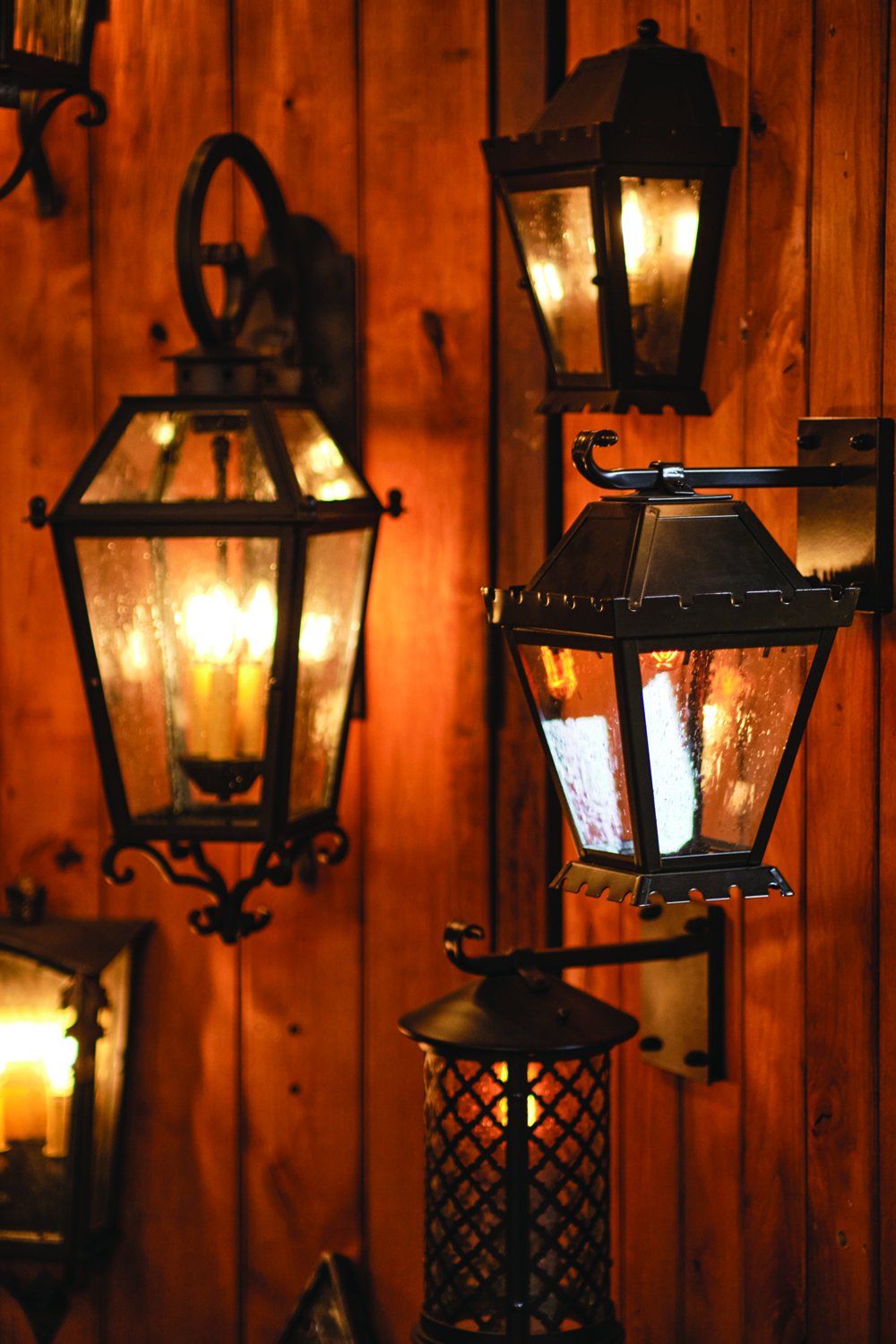 Duus is perhaps best known for his designs in the Wizarding World of Harry Potter attraction at Walt Disney World in Orlando, FL, where he was involved in the initial concept phase. He shared a story about a hiccup early on that might have thwarted his involvement: the project submittal manual — all 400 pages of it — repeatedly called for CAD drawings done on a computer.

“The first thing out of my mouth was, ‘I don’t do CAD.’” After his hand drawings were submitted, he received a phone call from the art director at Warner Brothers. “He was thanking me for giving him a hand-done drawing. He said ‘I can understand how you’re going to make these things. You show it in your drawing style. I can trust you to make what I want.’ That was kind of a fun pat on the back, and he appreciated the hand work and knew that would carry on into the creation of the lighting.”

His love of working with hot, black metal goes back to his childhood. His father was a carpenter and while Duus didn’t take to woodworking, he soaked up vital skills. “I’ve always built things,” he said. “When I was a little tiny animal, I heated up nails in barbecue pits and pounded on them. That’s where it started.” He fell in love with the process in a high school welding class and found a summer job at a forge. There, Duus learned from a German man who came to the United States after World War II. He brought his craft with him, teaching Duus the foundation of crafting black metal into light fixtures. “Here I am, 54 years later, still making light fixtures,” Duus said. 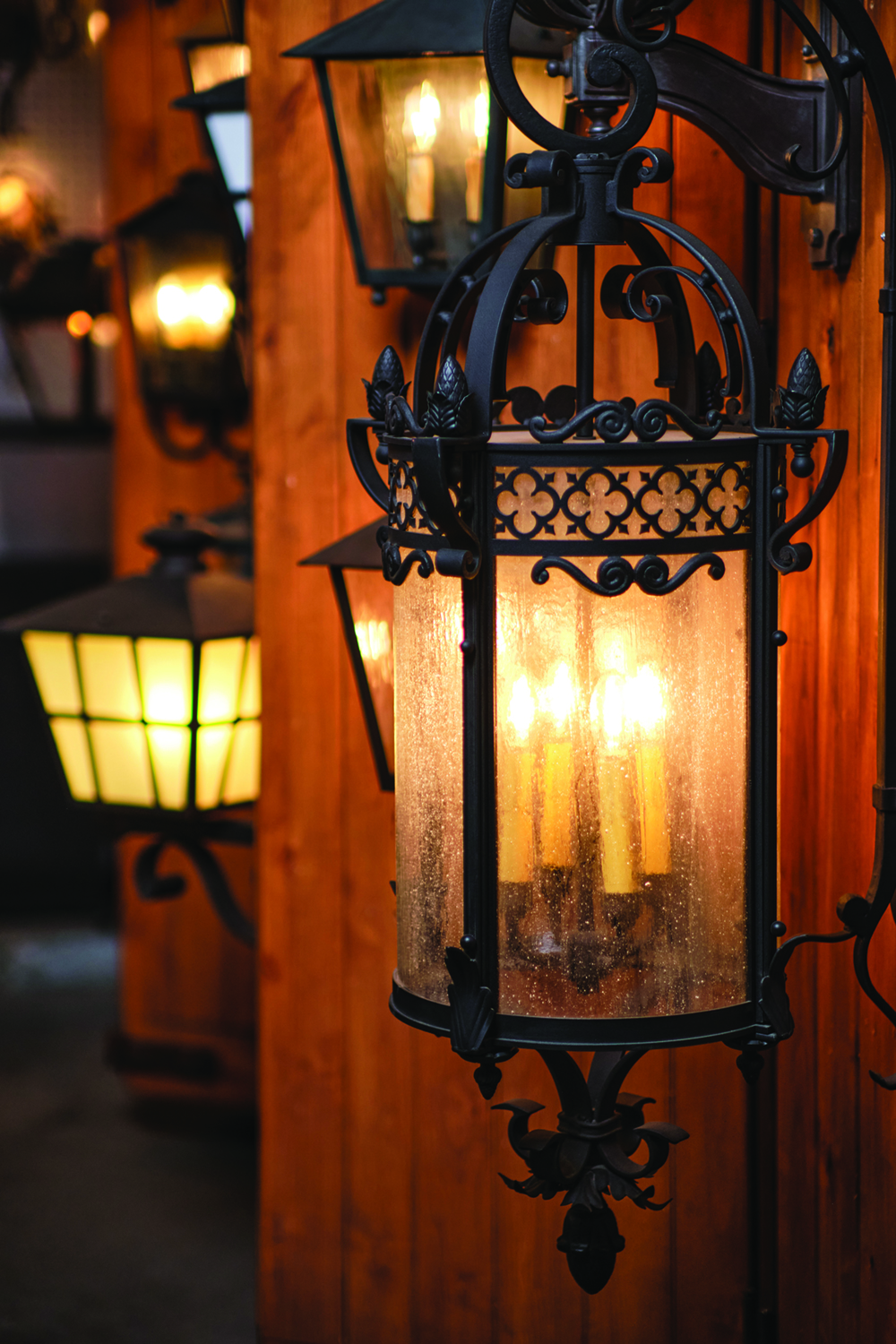 Duus is known for the incredible details that have gained him recognition across the country and beyond.

Education has been an important part of developing his craft over his lifetime, and he still refers to his textbooks from college. He has served on the advisory board for Alan Hancock Community College in Santa Maria for more than 30 years and has been teaching blacksmithing at the college for 25 years. “It’s actually a really good deal,” he explained. “I use it for recruiting. When you spend a semester with somebody, you kinda see what they’re all about.” Three of his employees are Hancock College graduates. One of them, Lydia Nelson, saw him give a demonstration when she was in high school and sought out his course a few years later.

Today, his forge runs off of natural gas and propane, but when he started learning the art and craft of working black metal he worked with coal, Duus said. “I love coal, it’s a great heat. I learned on coal. It has a really pungent odor. If I smell it anywhere, I go chasing it. The problem is smoke.” The gas and propane used today may be easier to work with than coal, but Duus still reminisces about the traditional material. “There’s still something that I miss about it. I do have a sack or two of coal around somewhere. Sometimes I break out a little old-fashioned forge and get some good heat.”

Not all of his work is large-scale amusement park art. His business is about 15 percent of stock products that are “off the rack,” so to speak, and available for sale through his website or in his Santa Maria shop. That includes items like light fixtures, fireplace and barbecue tongs, tables, mirrors, and iron brands.

“The rest is all one-of-a-kind, contract work.” Along with designs for theme parks, he also works on hotels and housing development projects. A current project involves outdoor fixtures for townhomes being built in historic Downtown Pasadena. “You name it, we’ve probably done it,” he said. “I did the Hotel Drover at the stockyards in Fort Worth.” That luxury Marriott Hotel project wrapped up about a year ago and Duus drew inspiration from the Old West. “They wanted some very unique chandeliers. I came up with the concept of barbed wire, not the regular kind you find on fences; serious barbed wire, heavy scale,” he said. “It could hold elephants.” 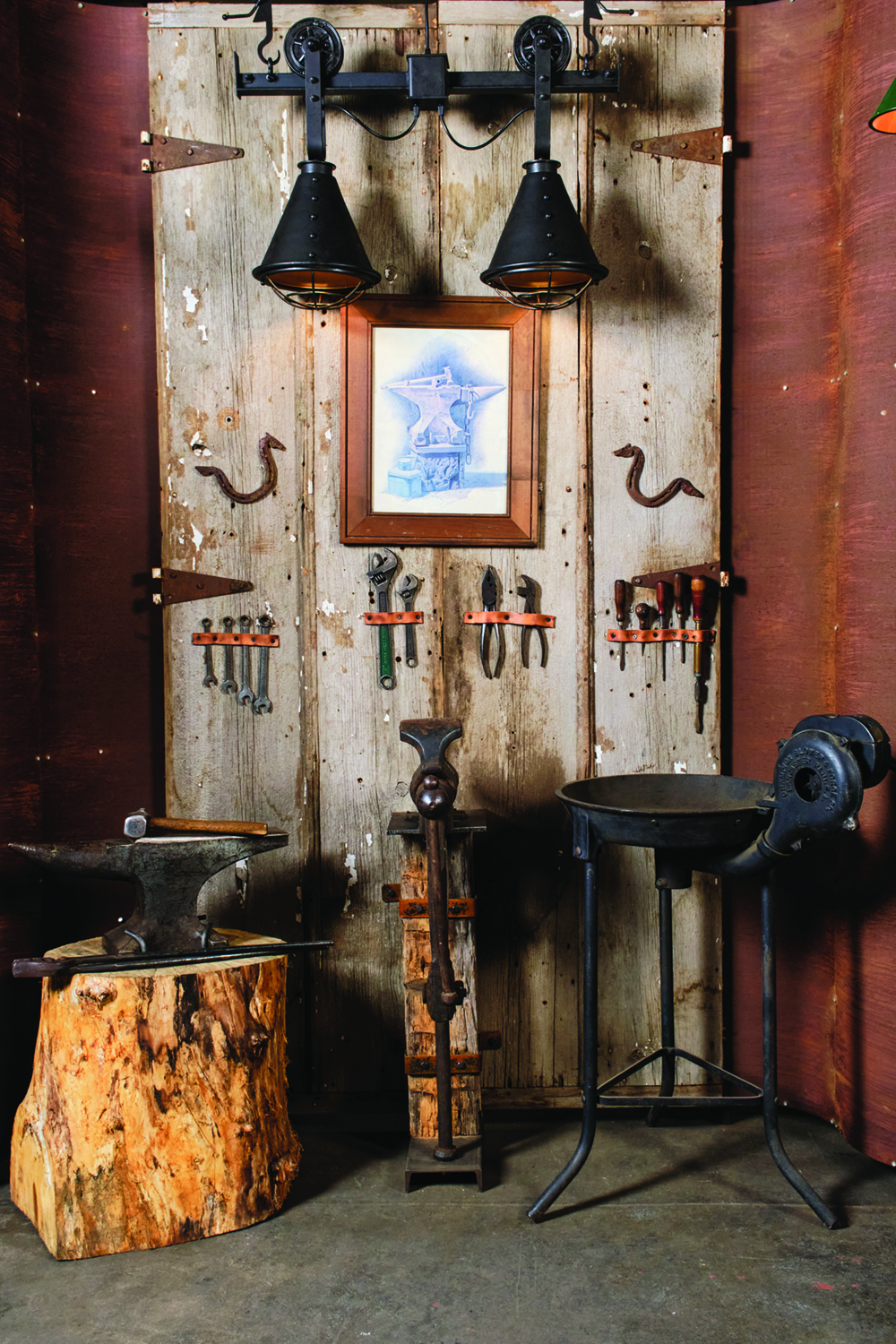 Another project he enjoyed working on required him to design and build historically accurate lamp posts for the restoration of Leland Stanford’s mansion at the California State Capital in Sacramento. The mansion was built in 1856 and was restored about 20 years ago. Duus had to work with old, blurry photographs to design two lamp posts that were long gone. He completed several castings, retooling the design until it matched with what he saw in his mind. “They turned out as close as anybody could come to what we thought was originally there.”

To meet the high standards required by these projects, all of the Duus fixtures meet the highest standards and carry the Underwriter Laboratory (UL) label and are subject to unannounced inspections four times a year. Many of his designs meet Dark Sky requirements to prevent light pollution, Duus pointed out. “We fight light pollution, especially in the rural areas, and try to educate the public not to litter the sky with light.”

His design process starts with what the client wants, but then he takes it from there. Based on the client’s initial request, Duus begins to see a shape develop in his mind. “I can see what it is, what needs to be done. The challenge is to get other people to see it. I don’t know if it’s a gift,” he mused. “I do a pretty good job of looking at something and knowing what it needs.” In finding the sweet spot in the size of his staff — today a team of four, down from 20 several years ago — he doesn’t have to hunt down jobs “to make payroll.” And he has the option of turning down jobs.

Duus described the actual process of working the metal as “sketching in iron.” It’s a term credited to master blacksmith Samuel Yellin, a Ukrainian immigrant who worked with metal in America in the early 1900s after learning the trade through apprenticeship in Europe. “He did some tremendous work. The National Cathedral, the Federal Reserve Building, are full of his creations. He wouldn’t know if the piece was going to work until he actually made a little fragment out of iron.” That fragment could be “a leaf scroll, a little detail.”

Figuring out “how are we going to make this work” is the part of the process that Duus most enjoys. “I want to create. I want challenges. How are we doing to make this work? That’s where I get my satisfaction. Take it from a piece of paper, build it in [my] mind, take it out in the shop, with those practice pieces.”

His shop is open to the public and he welcomes visitors to come learn about the traditions of forged ironwork. This summer, the shop will begin hosting public workshops (by reservation) for the novice to learn hands-on and complete a project in a couple of hours. Groups up to five, ages 16 and up, are welcome. Check the shop’s website for details. 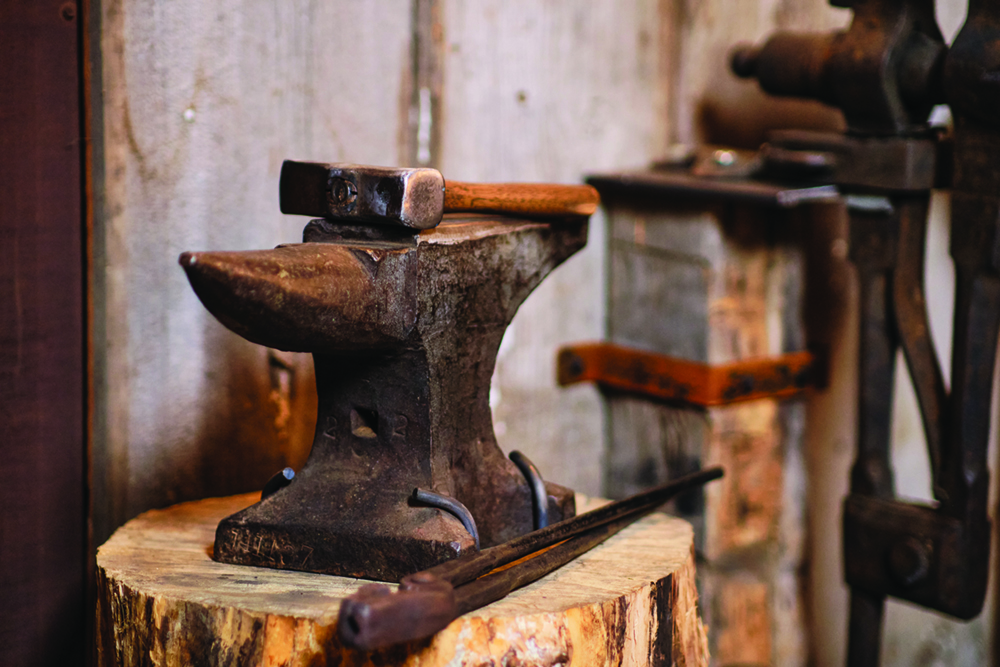 Duus hopes his show room will help inspire people to create their own unique spaces, whether with work he has on-hand or something entirely new they’ve dreamt up. “You can find inspiration in a pile of metal, or hidden in a box,” he says.

For those just planning a visit, giving a call or email in advance can ensure a superior experience. “When you pull in, it just looks like a big warehouse, 10,000 square feet,” said Duus. Part of the space is a fabrication area, and another section for finishing assembly. “Then we have what I’m calling the Gallery at the Forge. That’s our showroom. It’s meant to be inspirational.” There are some products for sale, but Duus expects potential clients to “start to get an idea” of what they want by looking at various pieces.

Being a working shop, Duus says, “It’s dirty. It’s noisy, and there’s a lot of stuff laying around. Creative people love it … I let them wander around and dream … You can find inspiration in a pile of metal or hidden in a box.”

Find Hans and his Gallery at the Forge at 2976 Industrial Parkway, Santa Maria. For more: hansduusblacksmith.com