“Slow the f-* down! Get out of the car and pee — feel the earth,” my partner Rita admonished me. Her words were softened by her relaxed bright smile as I dove the van aggressively into the well-crowned twists of Old Creek Road out of Cayucos. She then challenged me to find three bird species and to identify them. I listened to her, and looked for the birds, and even stopped periodically. The drive was exponentially enhanced. 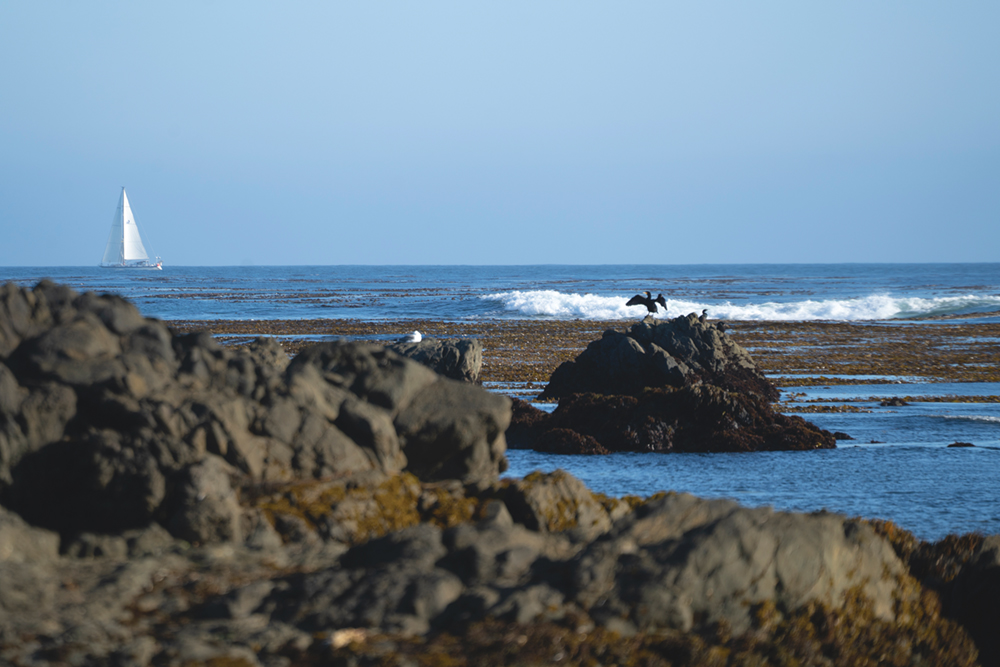 Whale Rock Reservoir is a quiet place for contemplation, bird watching, and fishing — all within a short distance of the ocean. Photo by Bennett Barthelemy

If you’re driving Highway 1, consider this detour. Running inland from Cayucos, it takes just 20 minutes longer than Highway 1 to get north to Cambria and San Simeon. Clocking in at 37 miles total, Old Creek Road will surprise you; live oaks hang heavy with Spanish moss kissed by tendril caresses of coastal fog. This mini sojourn meanders past Whale Rock Reservoir, ranch lands, avocado orchards, nascent vineyards, rolling oak savannah, and epic views from the crest of the Coast Range to Morro Rock. Coastal grasslands give way to this route’s terminus, San Simeon’s beaches, where 5,000-pound mating-farting-fighting elephant seals haul up on the sand — sometimes by the thousands, depending on the time of year. 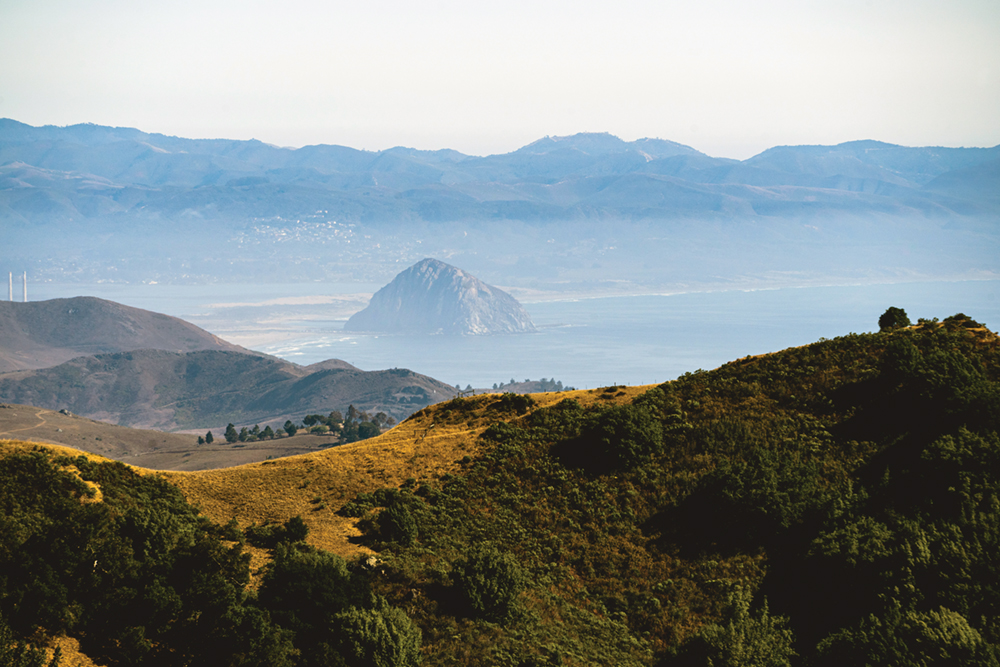 We start our drive at the junction of north Highway 1 and Old Creek Road. If we look in the rear-view mirror, we can see the hulking Morro Rock. The history of the naming of Morro Rock is somewhat contentious. Some believe, due to the historical record, that it is a Spanish word for crowned hill and so named by the 1542 exploration by Portuguese explorer Juan Cabrillo. Spelled historically with a missing R, moro means Moor/Muslim, and the shape of the rock is said to resemble a Moor with a turban. In the local language of the Northern Chumash, they call it Lisamu. I would argue that this is the best way to identify it. 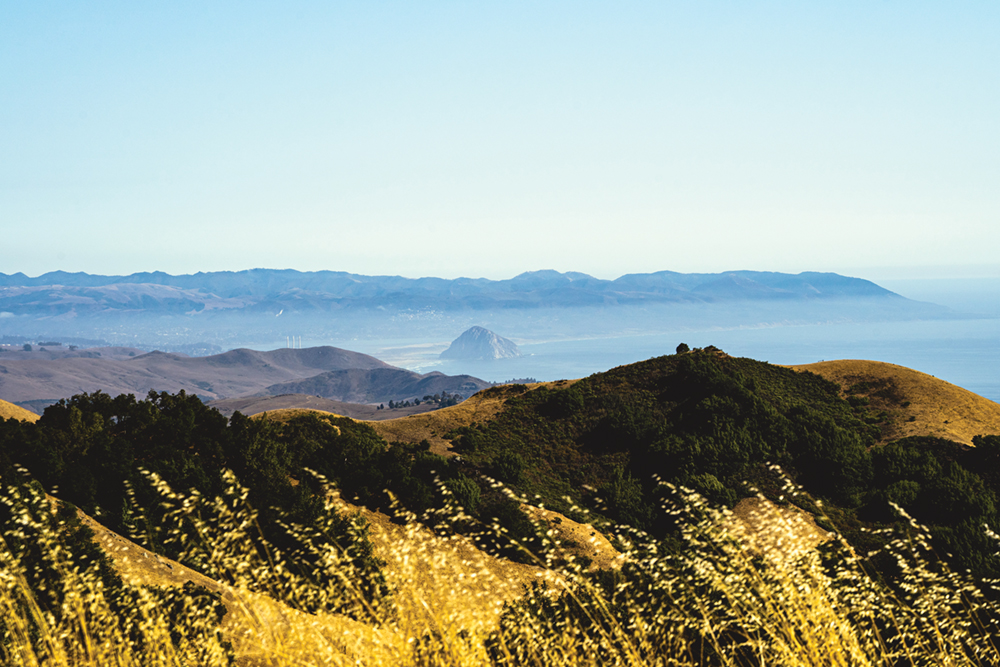 Your everyday climber (like me) is barred from climbing the nearly 600-foot volcanic plug of dacite and semi-solidified bird guano. But Salinan tribe members are allowed to climb it each year at the winter and summer solstices for ceremonial reasons, although this right is disputed by other area tribes.

Morro Rock is also a designated sanctuary for peregrines, and I know from intensely scary personal experience that peregrines are extremely territorial and will dive-bomb you to keep you out — a 200 mph screaming/shrieking bird of prey with huge talons going for your head is likely to keep you away. It is said the local Northern Chumash, who are still here, believe that the rock is sacred and should never be climbed — maybe because they listened to the peregrines? 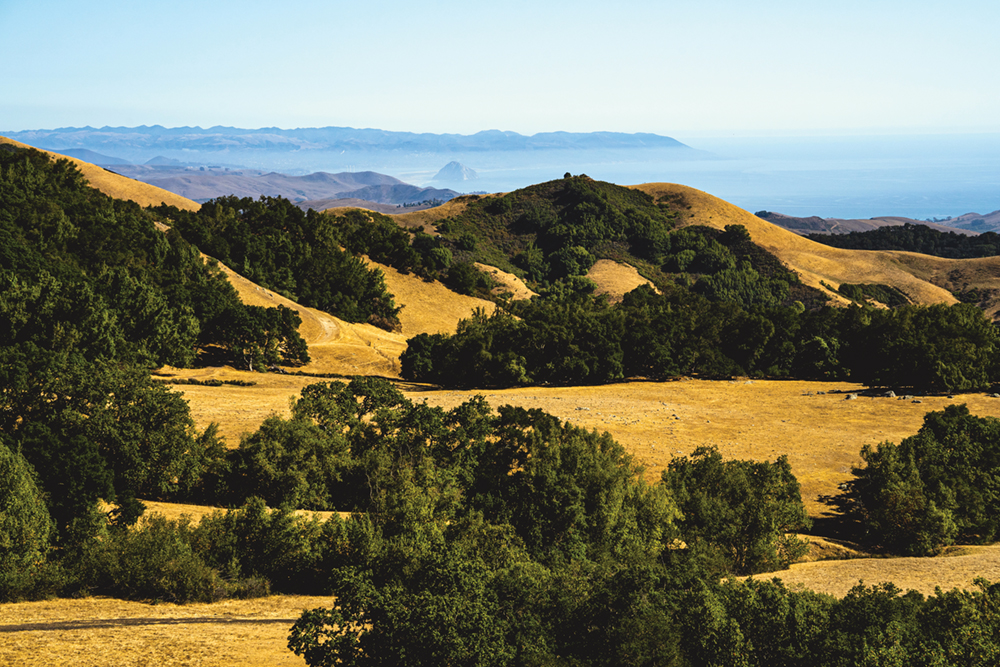 Regardless, its prominence in the region is impossible to ignore, especially from the start of our jaunt in Cayucos. Cayucos, by the way, has been rated one of the coolest towns in the U.S., with its 6 miles of sandy beaches, a pier dating back to 1872 with frolicking otters below, and a broad array of food options throughout the historic downtown. For a bit more context, the word cayucos is said to be the Spanish word for the region’s local tule reed canoe — not to be confused with the tomol, which was a solid piece of tree trunk sealed with asphaltum and used for much more serious ocean journeys. 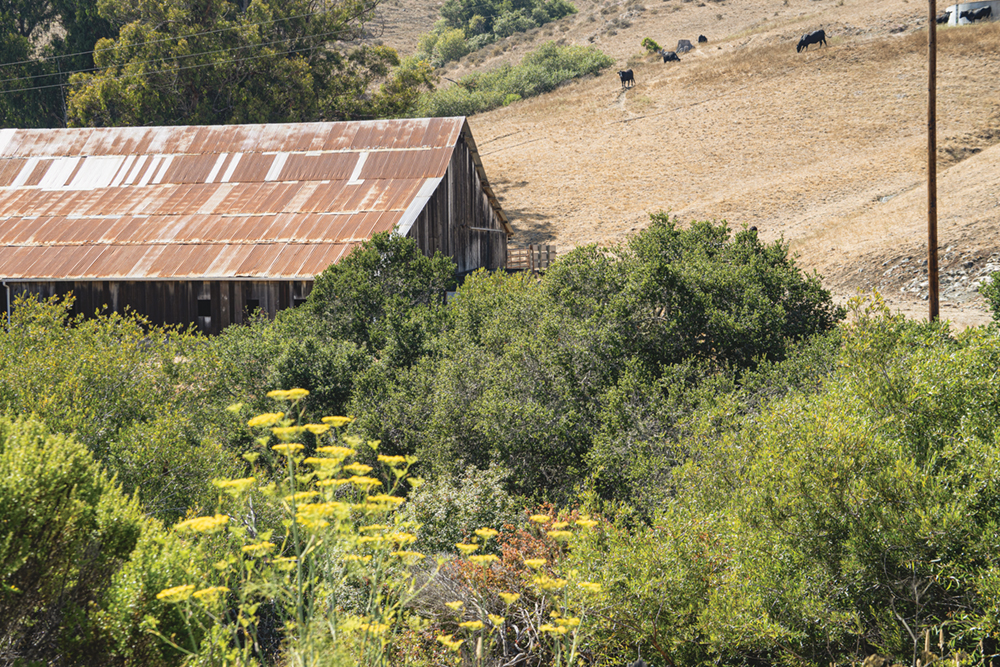 A historic barn sits half hidden by brush and mossy oaks. Photo by Bennett Barthelemy

As we leave the coast behind, we pass the historic and picturesque Creek Ranch on the left, with its legions of cows, before the road climbs to 220 feet above sea level to Whale Rock Reservoir. It’s a popular spot for trout fisher-folk and used often by those with a pole in hand, but is also a popular out-and-back hike for the rest of us. Built in 1961 to provide water for San Luis Obispo County, the reservoir is like a floating lagoon hemmed in by small rolling peaks floating above the shimmering Pacific Ocean. The muddy flats at the water’s edge are home to many birds as well, including egrets, bald eagles, turkey vultures, and many more. 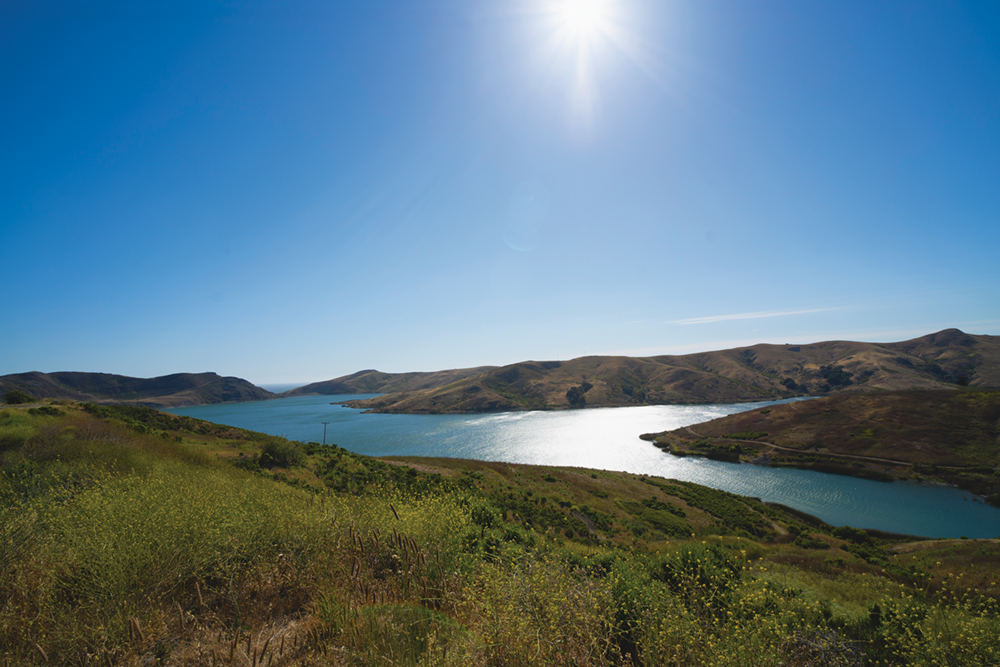 Whale Rock Reservoir is a quiet place for contemplation, bird watching, and fishing — all within a short distance of the ocean. Photo by Bennett Barthelemy

From here, the road engages tight twists as it crawls past avocado groves and vineyards fed by the waves of coastal fogs that rush in pretty much daily. Once at the Highway 46/Green Valley Road crossing, we turn left, and before long we are cresting the pass at some 1,300 feet elevation, taking in majestic views of Morro Rock and the Pacific past the rolling hillocks of the grasslands punctuated by oaks. Just beyond, the steady descent drops us back to Highway 1. Making a quick right turn, we enter Cambria proper.

Rita and I chose to push a few miles further to enjoy views of the vertiginous William Randolph Hearst Castle (aka La Questa Encantada, aka The Zoo, aka What God would have built if he had the money), with its 38 bedrooms, 40 bathrooms, and a dazzle of zebras far below. Yes, you read that right, a herd of zebras is called a dazzle. If you are lucky enough to spot more than one of the 120 zebras on the 83,000 acres, you too can call it a “dazzle.” This section of the 1 is arguably one of the finest along the celebrated highway. Not only do you pass the Hearst Ranch in San Simeon where you can stop for lunch and a bottle of quality local wine, you can venture a few miles further, as we did, along the western edge of the North American continent to Piedras Blancas Elephant Seal Beach and Rookery. There you’re in for a raw and quite popular display of mammalian male dominance. 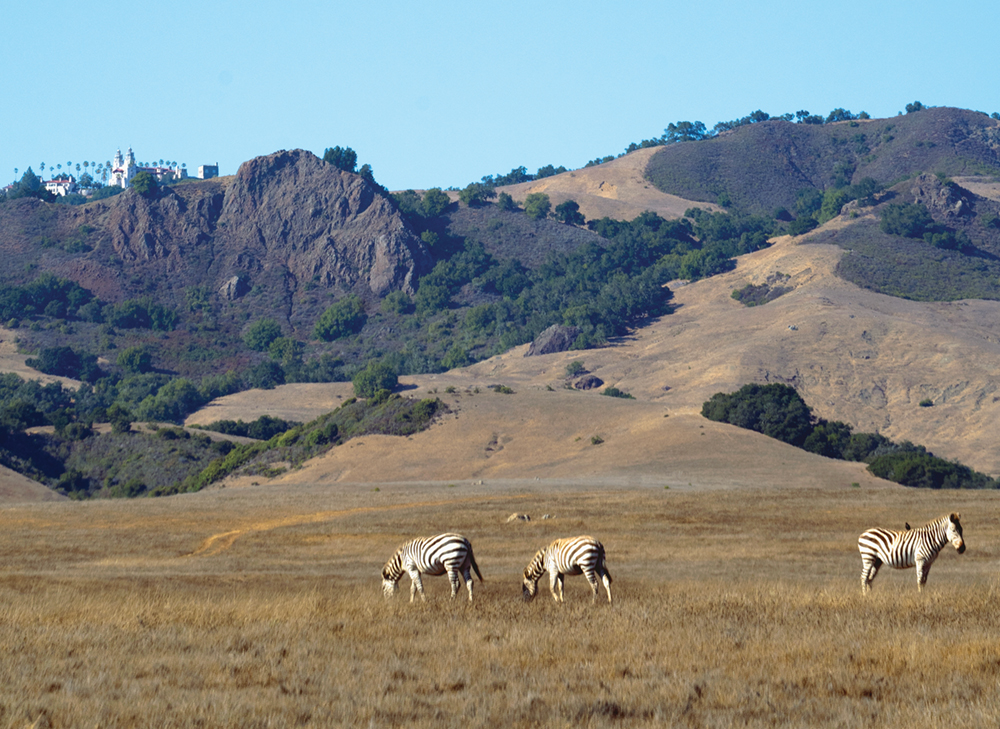 Back down on the San Simeon coast, zebras graze as Hearst Castle stands sentinel on the hill above. Photo by Bennett Barthelemy

The fascinating (and sometimes fragrant) display rotates throughout the year: mating males fighting for dominance to command their harems of some 50 females; lounging elephant seals recovering from their biannual 3,000-mile swims between Alaska and Baja; molting groups; nursing mothers. According to Friends of the Elephant Seal, some 25,000 elephant seals call this 8-mile stretch of beach home. When you see them by the thousands, it’s hard to believe they were almost wiped out, with only some 50 remaining in Baja California, Mexico. But they are a rare success story. The discovery of kerosene, which meant animal blubber was no longer needed for oil lamps — as well as laws restricting hunting — helped the species recover. Check out Friends of the Elephant Seal at elephantseal.org to get involved and learn more.

So please, next time you have an option to take the path less traveled, take the backroads for a fresh perspective. Slow down, engage with the local landscape and the wildlife, and say hello to a local — furry, feathered, or two-legged. I can share with good authority, having been a slave to my ADHD and the straight-shot drive for far too long, that these little sojourns can be invigorating, revitalizing, and exponentially rewarding when you consider the overall serendipitous engagements that make these wanderings so much richer.