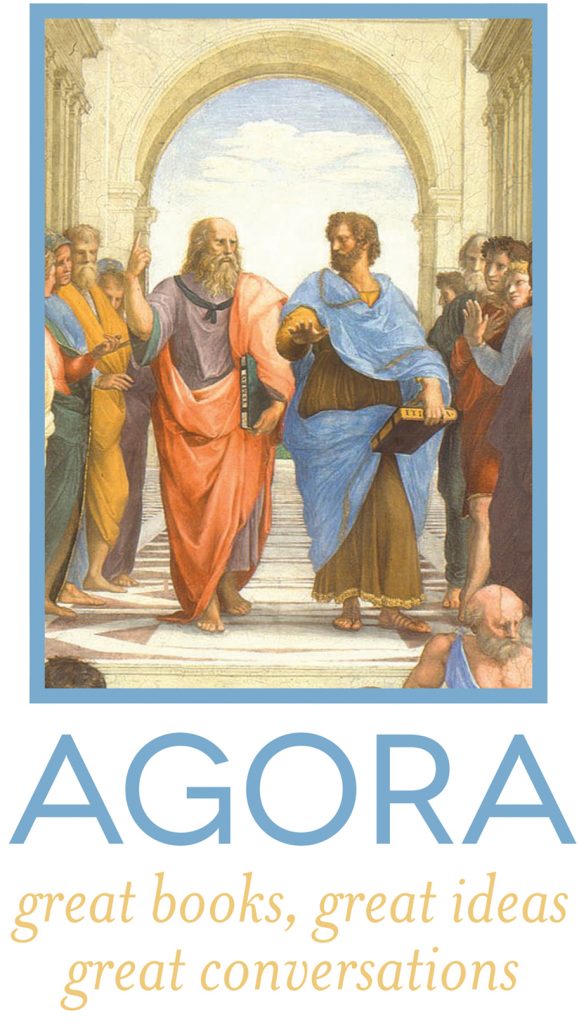 Why are we here? How are we different from animals? What does it mean to be happy? When is war justified?

I know that’s kind of a heavy way to start what is usually an entertaining column, but I promise I have a point. And come on, you’ve thought about that stuff before. We all have, as our ancestors did for thousands of years. There are some pretty smart guys (Aristotle, Kant, Nietzsche) who came up with some pretty interesting answers.

But if delving into their works on your own seems a bit intimidating, don’t worry — Ojai’s Agora Foundation has your back. They’ve put Ojai on the map as the go-to place for exploring Man’s greatest works, in an accessible and deeply fulfilling way.

Turns out, there are surprisingly few places in the country that you can do this outside of a full college course. But most of Agora’s seminars take place over a single day, or even a couple hours.

Utilizing the seminar method, Agora event participants gain a solid understanding of a text by going through it together, discussing it piece by piece, under the guidance of a tutor who gently steers the conversation rather than lecturing.

“It’s a really amazing way of learning,” says Andy Gilman, executive director and frequent tutor. He has a point. Think back to the last time you were in a classroom. You’re likely picturing a teacher in the front of the class, going on and on as you struggle to pay attention and take notes. Ugh. Boring.

But in Agora seminars, the teacher isn’t up front. They’re not even sitting around the table with you. That’s because the teacher is the author. “Our job is to try to understand what the teacher is saying, before we decide if we agree or not,” Gilman says. “So literally, 75 percent of our time is trying to figure out what Moliére is saying in ‘The Miser,’ what Márquez was saying in ‘One Hundred Years of Solitude,’ or whatever the book is. And that’s hard enough!” (Kudos to Gilman for plugging those two, which are on the seminar schedule for April 14 and April 6, respectively.) 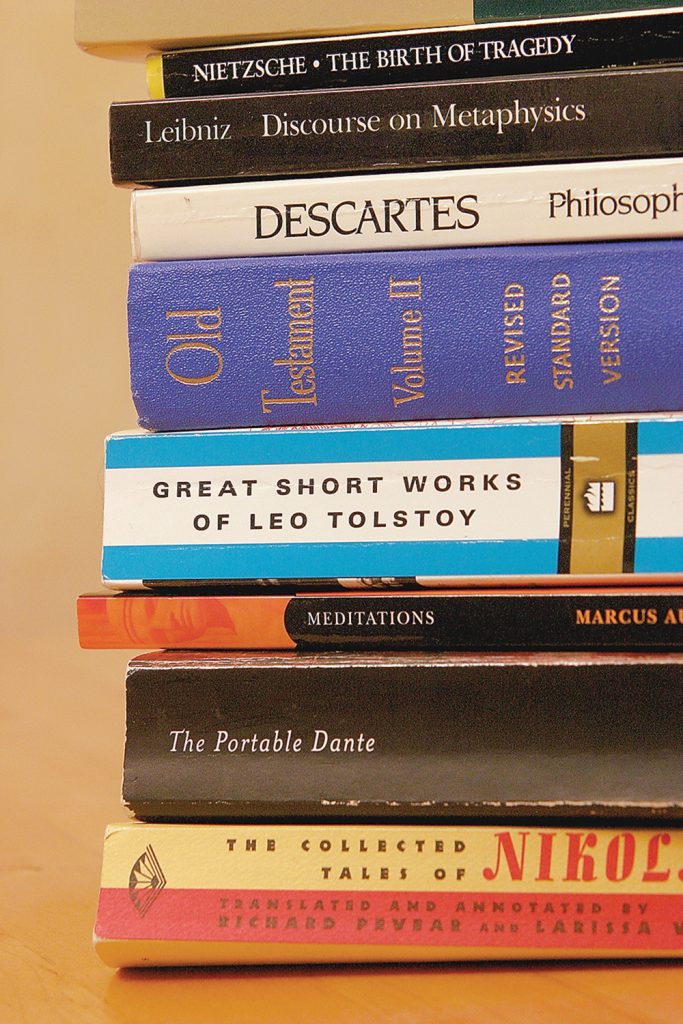 The seminar method works with just about any kind of text, and Agora has put it to good use in more than 200 seminars discussing philosophy, science, politics, poetry, literature and more. So along with Kant and Freud, you’ll find Homer, Sartre, Austen, Twain, and Dostoyevsky in the lineup. And although they’re an entirely secular organization, Agora doesn’t shy away from theology, finding that studies of Bhagavad Gita and the Bible offer value and insight, as well.

Ultimately, the goal is to make weighty, complicated texts and ideas accessible, and more than that, super interesting. As Paul O’Reilly, vice president of curriculum and tutor, says on the Agora website, education isn’t mean to be passively received; it should be an active practice. That’s probably why so many Agora participants are teachers themselves, who bring both the texts and the teaching techniques back to their own classrooms.

Gilman points out that it actually goes even further than just understanding a text. “You get to really actively listen to other people,” he says. “Usually, when someone else is talking, you’re ready to say your answer. But as you go on (in the seminar), you realize more and more than, no, actually, the better thing to do is to really understand what the other person is saying. So that’s a huge benefit.” He goes on to list some others — “how we can actively disagree with someone, civilly … and, how to disagree without being disagreeable … So really, it’s learning how to work in a group.”

Dang. That is some pretty profound stuff.

The fact that this kind of thing exists in Ojai — and that valley residents are the kind of people who value it enough to keep supporting it — is pretty amazing, and speaks volumes about this community. 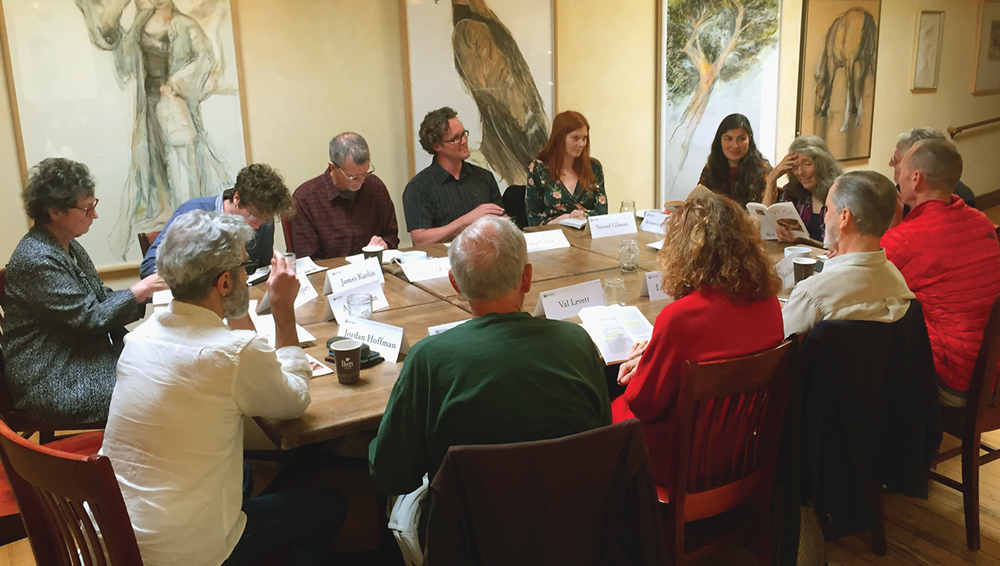 All photos courtesy of Agora Foundation

Making it even better is the fact that Agora is teaming up with other Ojai groups, like the Ojai Art Center and the Ojai Music Festival. Agora already offers several seminars a month (with at least one being shorter, and free of charge), but new for 2019 are a few expanded offerings. The first is the aforementioned seminar on “The Miser.” When Gilman saw that the Ojai Art Center was going to produce the play in the spring, he thought it would make a great seminar topic, as well. So, on April 14, Agora’s got a full day planned that will include: breakfast at Azu; a seminar in the morning; a French lunch and French wine from Ojai’s Point de Chene; a showing of the Art Center’s performance; and a discussion with the play’s director and the theater’s artistic director afterward.

Then, on May 18, the Agora Foundation will pair with Lance Brunner, professor of music at the University of Kentucky, for “Adventures in Listening: New Music Since 1899.” Another full-day event, it’ll include seminars on how to listen to new music, featuring work by the Ojai Music Festival’s 2019 music director, Barbara Hannigan.

Participants delve into a deep discussion in a seminar titled “Structural Anthropology,” held at the Ojai Retreat.

Coming up soonest will be a free Ojai Chautauqua Panel (oh yeah, I forgot to mention, the Agora also produces the Chautauquas). The topic is one that still weighs heavy on many minds in the valley: fire. Titled “Not if, but When: Preparing the City, Valley and Region for the Next Wildland Fire,” it’s set for March 30 from 3 to 5 p.m. It’s free, thanks to sponsorship from the Ojai Valley Chamber of Commerce, but you’ll want to RSVP in advance because this one will definitely fill up quickly.

To see what’s on the Agora lineup and learn more, check out their website, agorafoundation.com.