If you’ve ever been to the Ojai Valley, you probably know how we feel about our citrus. We turn our noses up at the greenish-tinted imports at the supermarkets, and instead seek the goods grown right here in the valley. Whether it’s at the Ojai Farmers Market, one of the many roadside fruit stands, or the mecca of Ojai citrus, Friend’s Ranches Packinghouse, we know where to go to get the freshest, most flavorful stuff available. 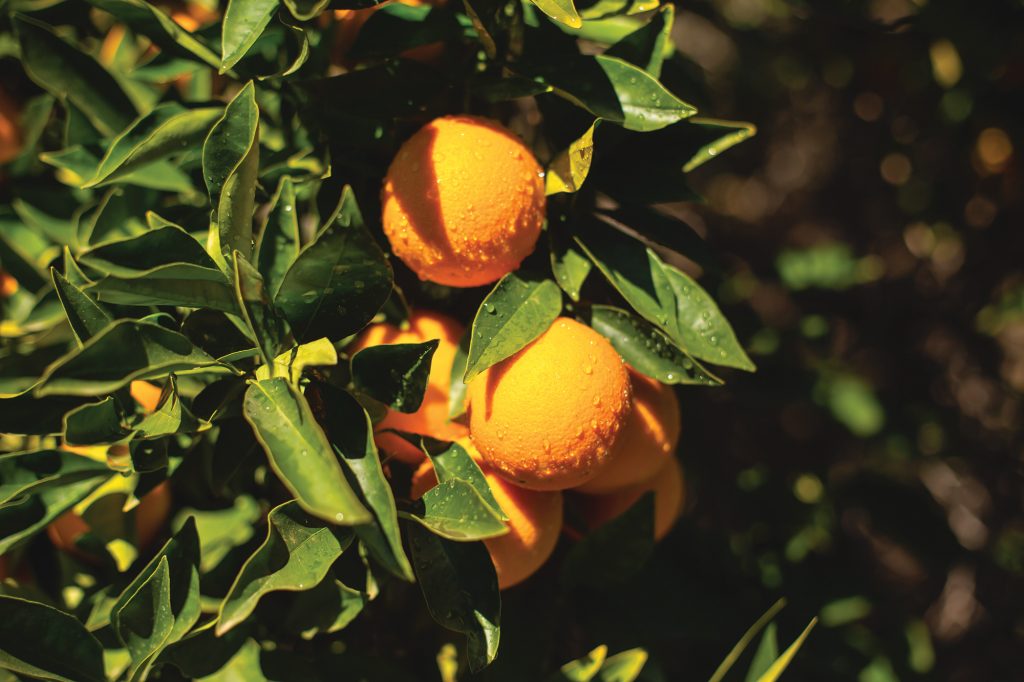 Photo by by Logan Hall

Oranges after the rain. Happy orange trees line the East End after one of this winter’s storms. The amount of rain this season has gone far to help area farmers.

That’s especially true this time of year, when the Ojai Pixie tangerine is in season. Seedless and super-sweet, they have become a symbol of the Ojai Valley that we proudly wear. You’ll find local restaurants using them in salads, desserts, cocktails, and more, from March through May each year.

But it’s not just hometown pride that makes us see this valley through tangerine-tinted glasses. There’s actual science behind our “only Ojai citrus” attitudes. It’s a combination of three factors: ideal climate, the right soil, and patient farmers. “Ojai has a great climate to develop a really good flavor,” said Emily Thacher Ayala, of Friend’s Ranches. “Pixies are hard to grow, but our climate develops excellent flavor on late-season tangerines.” Ojai’s rocky, quick draining soil, she added, makes it perfect for farming tree crops.

But neither of those things would make much of a difference if it weren’t for the final factor: the dedicated local farmers for whom taste and quality is paramount. “We’re small enough growers that we can wait until they taste good before we pick them,” Ayala said. “A lot of companies pick too early; they’re not maximizing the flavor.”

But the Ojai Pixie Growers Association — which includes more than 60 local farming families — doesn’t have that problem. They’re focused on making Ojai Pixies, and all of their other citrus, the best-tasting product they can produce. “People need to love what they’re selling, and we certainly love what we’re selling!” Ayala said. 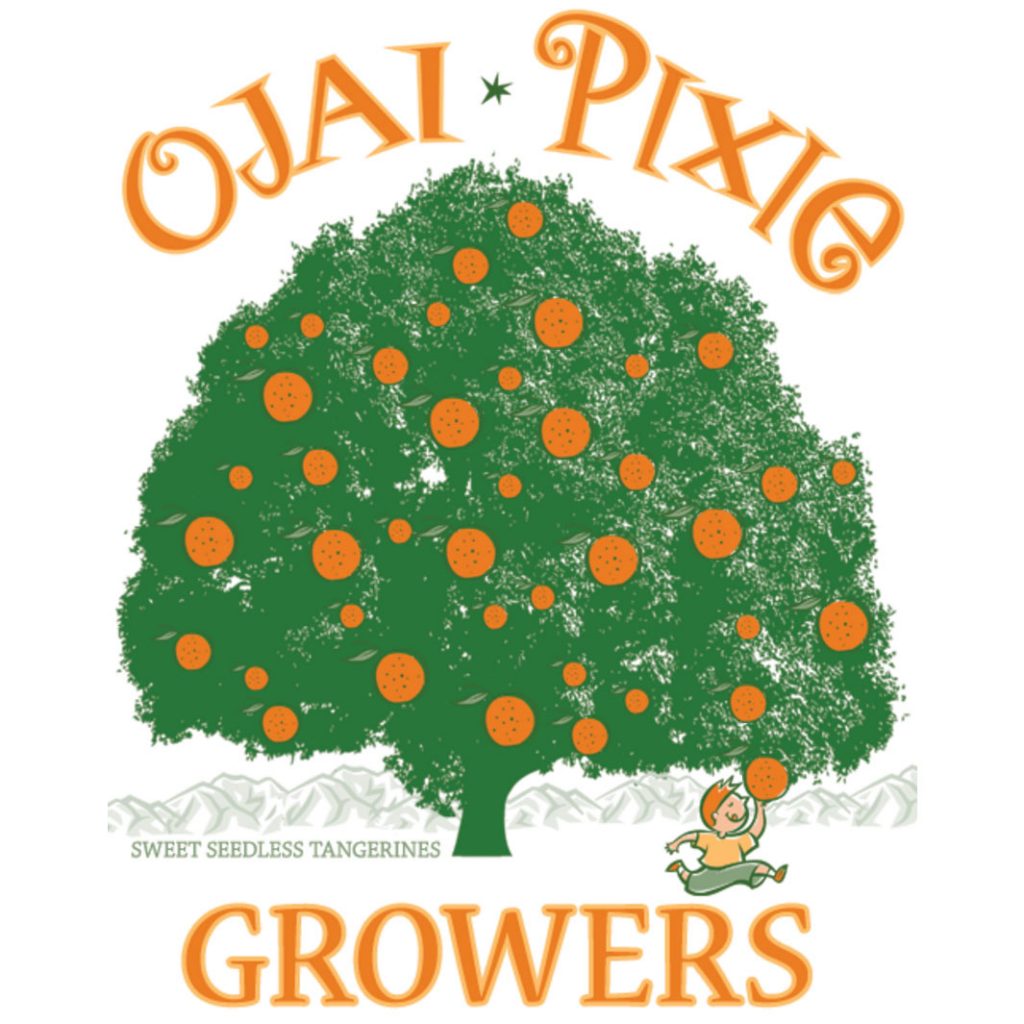 The Ojai Valley has been benefitting from Ayala’s family’s citrus knowledge (and love!) for well over a century. Her family — the Friends on her mother’s side and the Thachers on her father’s — has been farming in the valley for five generations. Her great-grandfather began growing citrus in the 1870s near San Antonio Elementary School. (Awesome Ojai trivia: her great-grandmother donated that portion of their land to the county to build the school.) The family still maintains the homestead and farms in that area and has expanded into other areas, such as up Highway 33 just north of Ojai, where their packinghouse is located.

Today, Friend’s Ranches grow more than 50 varieties of citrus — regular oranges, blood oranges, lemons, and grapefruits, and 18 varieties of tangerines, among others. “And a lot of them we only have two or three trees of,” Ayala said, such as the Buddha’s hand and a few unusual lemon varieties. Friend’s also grows several types of avocados (not citrus, obviously, but also grows well in the Ojai Valley).

Ayala’s favorite crop, though, remains the Ojai Pixie. “It’s my childhood fruit. It’s easy to peel, kids love it, adults love it. It’s an easy fruit to share.” Another popular choice is the W. Murcott, which is more on the reddish side than the Pixie. It is popular with chefs due to its stronger tangerine flavor. “They start in late January, and are a little tangy,” Ayala said. “When it warms up, they get sweeter and sweeter, like candy. It’s a strong tangerine flavor that’s good in juice, cocktails, salad dressings, for zesting, in cakes … and Ojai has a great climate to develop that really good flavor.” 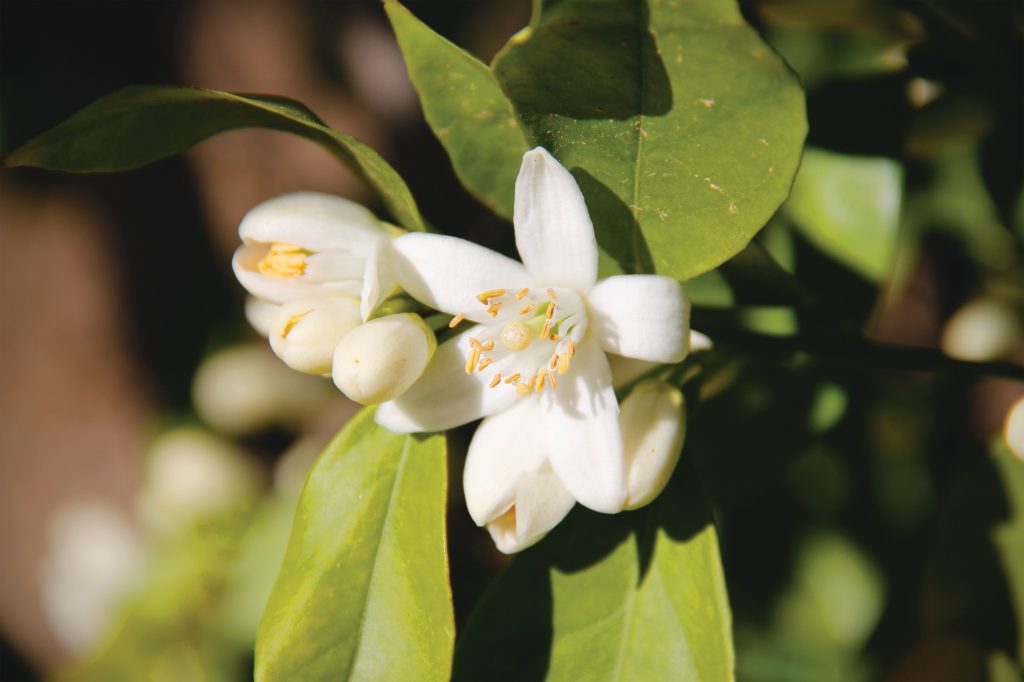 Photo by by Misty Hall

There’s nothing like fresh citrus blossoms! Their intoxicating scent perfumes the air over the entire Ojai Valley this time of year, bringing with them the promise of what is arguably some of the world’s best citrus.

Another popular Ojai citrus: Valencia oranges. These are also fantastic eaten fresh, but are renowned for their juice-ability (if that’s not a word, it should be). Much of your typical grocery store orange juice includes Valencias — although, really, you haven’t lived unless you’ve had fresh-squeezed Ojai Valencia OJ on a hot August morning.

But no matter what the variety, it’s hard to beat just-picked citrus, right out of your own Ojai backyard. My brother and I grew up feasting on the oranges that dangled over our neighbor’s fence, climbing up to the top of our swing set to pluck the best ones. We learned, as the local farmers have long known, that being patient yields the sweetest fruits.

But if we needed to get our fix before then, it was a special treat to head up Highway 33 just north of Ojai to get a bag from the Friend’s Ranches Packinghouse. It’s still open to the public on Tuesday and Friday mornings. You can also find them at the Farmers Market on Sunday mornings, in both of the Westridge Markets, and at friendsranches.com.

While this year’s Ojai Pixie crop isn’t quite as large — lingering effects from the Thomas Fire — it is proving to be an extraordinarily sweet one thanks to last summer’s heat wave. And with all the rain we’ve had, next year’s crop will be just as tasty. Lift your sniffer to the sky and take a whiff of those fresh citrus blooms. The proof is in the air!