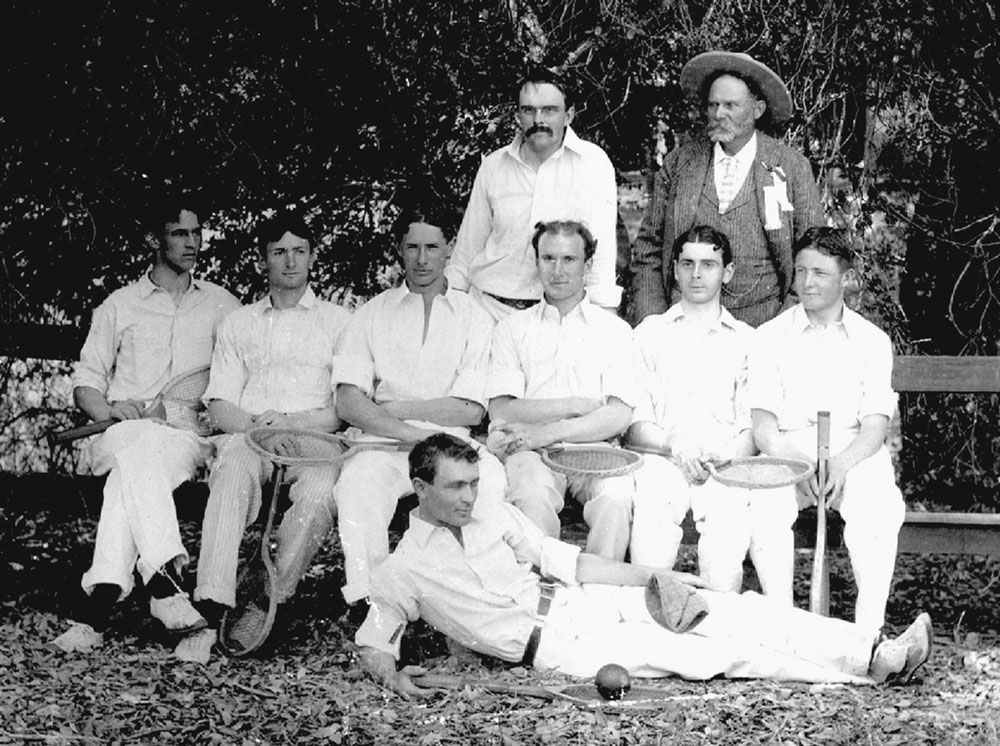 Competitors from the late 1800s find a shady spot between matches.

This time of year, you might hear people around town talking about “The Ojai.”
“Are you going to The Ojai?”
“Where else would I be on the last Sunday in April?”
“Great! See you at the tea tent!”

For the uninitiated, we’re talking about The Ojai Tennis Tournament, and it’s kind of a big deal. A big deal historically (this is its 119th year) and logistically — more than 100 courts, public and private, are used in Ojai and around western Ventura County.

It’s also a big deal in terms of its significance to the tennis world as a whole. The Ojai has a huge Youth Division, a major Open Division prize purse ($30,000 will be awarded this year!), and is home to the Pac-12 Finals, the Division II and Independent College Finals, and the California Community College Finals. 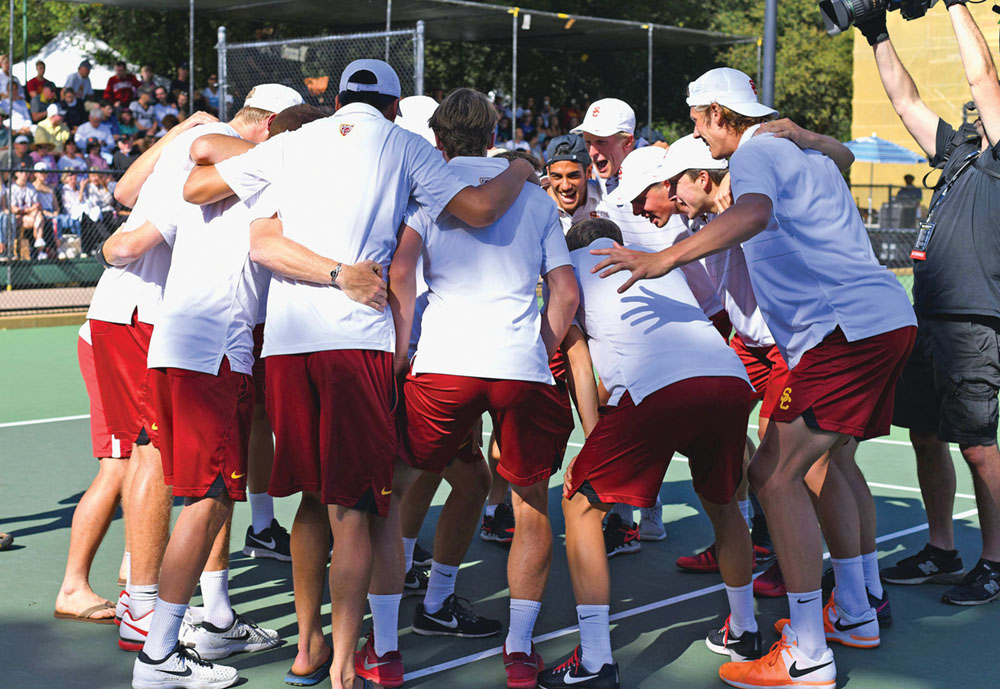 The USC men’s team gets amped before the final match in 2018.

It’s not surprising, then, that some of the biggest names in tennis played on the Libbey Park courts on their way to stardom. In all, 89 former Ojai competitors have gone on to win a Grand Slam event. You can find their names on a huge plaque on the Libbey Park bleachers — names like Billie Jean King, Arthur Ashe, Bobby Riggs, Stan Smith, Pete Sampras, Tracy Austin, and Mike and Bob Bryan. The latter pair are the winningest doubles team in the history of the sport, and they played here as kids. So, too, did legendary USC tennis coach Peter Smith.
That’s one of the most exciting things about The Ojai. Not only do you get to see some seriously great tennis, you also get to watch and wonder which players will end up on the courts of Wimbledon, or at the U.S. Open (held in — cough cough — Arthur Ashe Stadium). And if you happen to be a fan of a Pac-12 team, all the better. USC and UCLA have traded men’s titles over the last few years, and Stanford and Cal are usually right up there, too. The Open Division attracts ranked players from all over the country, as well as from right here in town (like recent Ojai transplant Lester Cook, frequent winner/runner-up in the Men’s Open singles and doubles). And now that the Women’s Open prize money is equal to the Men’s, you can expect even bigger things in that division, as well. And don’t discount the youth divisions; after all, the Bryan twins first won in the Boys’ 16-and-under division. 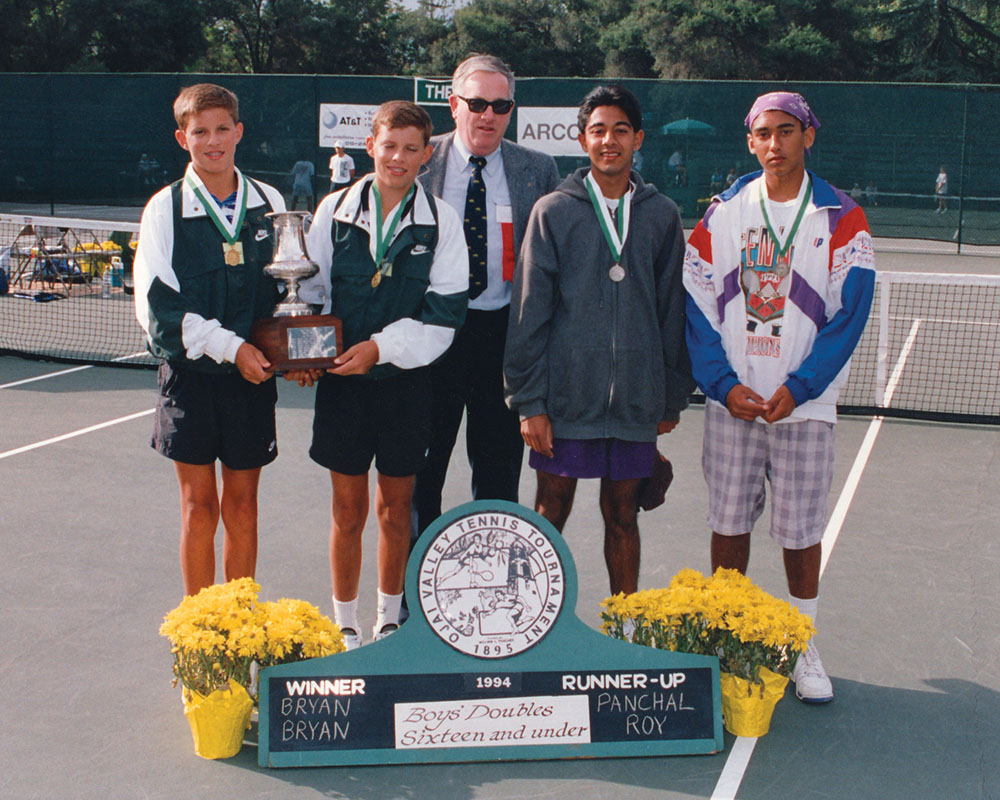 Mike and Bob Bryan started winning titles at The Ojai in the Boys’ Division in 1994. Four years later, they would win for Stanford. Today, they’re the winningest doubles team in history.

Even if you’re not a tennis fanatic, there’s something undeniable about the energy that surrounds Libbey Park when The Ojai’s in full swing. The rows of photos going back decades; the hordes of spectators settling into the green bleachers; the hush that falls over the courts before the first serve; the random cheers that erupt from the next court; the hot afternoon sun filtering down through the oak trees … and the tea tent! A sweet tradition that’s almost as old as The Ojai itself, the tea tent is where you can pick up a fresh (complimentary!) cup poured from polished silver urns into real china cups; where dozens of dedicated local ladies hand out thousands of cookies. It’s The Ojai’s answer to Wimbledon’s strawberries and cream, made all the more “Ojai” with the addition of fresh-squeezed local orange juice in the mornings.
And, like nearly everything else at The Ojai, it’s done with the work of volunteers. The folks at the Ojai Valley Tennis Club work all year to make the tournament possible, and to help promote tennis in the community through various events, youth programs, and scholarships. Hundreds of people come together — both in the Tennis Club and in the community — in ways big and small. Whether they’re older folks selling tickets in the booth, or teenagers retrieving tennis balls from under the bleachers or on the court, volunteers make it all possible.
It’s been that way for well over a century.

The ‘60s were a magical time in Ojai tennis history, when Arthur Ashe (from left), Billie Jean King, and Stan Smith all won titles on the Libbey Park courts.

In the 1890s, a tennis player from back East came out to visit family and decided to stay, bringing with him his enthusiasm for the sport. William Thacher would go on to build the first court at his brother Sherman’s school (now The Thacher School) and help start the Ojai Valley Tennis Club. By 1896, William and his club challenged the Ventura Tennis Club to a competition. And with that, The Ojai Tennis Tournament was born. It’s only skipped a few years — for WW2 and once for an outbreak of foot and mouth disease in the ‘20s — but otherwise, The Ojai has owned late April in Ojai.

The 119th Ojai Tennis Tournament is set for April 24 to 28. Get tickets and learn more (a LOT more!) at theojai.net.