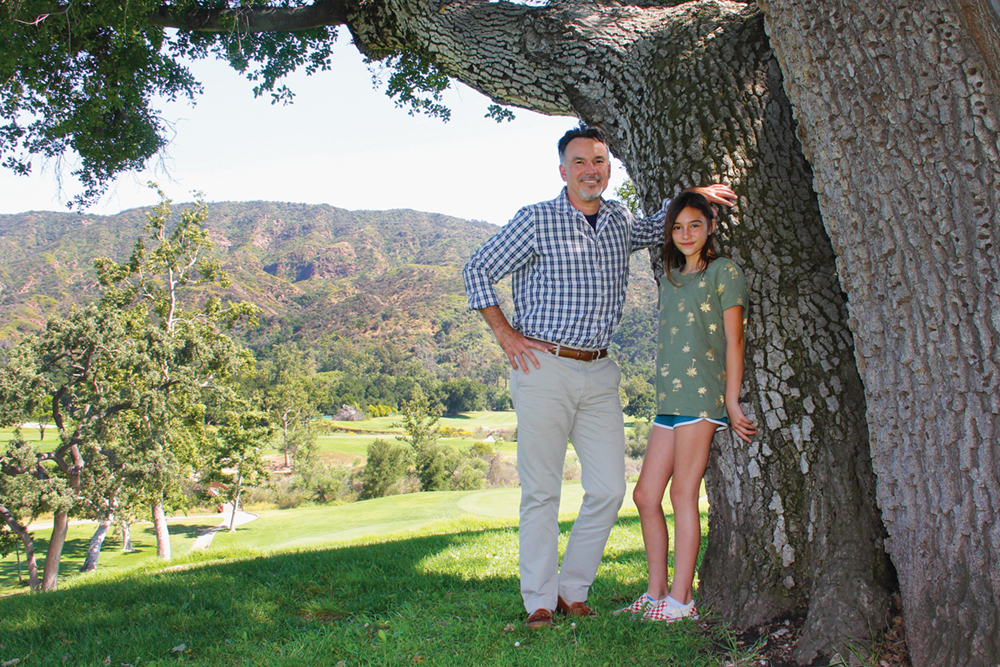 Robin loves spending time with his daughter, Josie, whether hiking, at the golf course, or just going out for ice cream. (Photo by Misty Hall/Sideways 8 Creative)

I first became familiar with the name Robin Williams way back in the early 2000s when I was writing sports articles. Back then, I only knew him as the guy who consistently ranked at, or very near, the top of the local golf leagues and tournaments. These days, Robin still knows his way around the course better than most (although he’s humble about his skill), but you’re more likely to find him showing houses as a Realtor or hanging out with his daughter, Josie.

Robin grew up in the Ojai Valley with his parents and three brothers, attending San Antonio Elementary, Matilija Junior High, and Villanova Preparatory School. Like so many Ojai natives, he left the valley after he graduated, venturing out into the world to places like New York and Newport, Ore. He enjoyed his work in sales — securities, commodities, currencies, and the like — but soon, Ojai began to call Robin home. “I had to figure out how to get back to that little hamlet!” he said.

And figure out, he did, with a little help from his friends, Larry Wilde and Dennis Guernsey. He’d known the pair — who founded Ojai’s Coldwell Banker Property Shoppe, now LIV Sotheby’s — for years, having spent many long afternoons on the golf course with them. “They were nice enough to offer me an opportunity,” Robin said. “It seemed like a good fit.” They were right, and Robin has worked with the pair since getting his real estate license in 2004. His background as a financial consultant, helping people manage their assets and plan for things like college and retirement, has come in handy. Uncovering people’s goals and helping them achieve those is something that has worked well in both industries for Robin. He’s able to uncover his real estate clients’ needs/goals, help them buy or sell their home, and then help them segue in (or out) of the community.

One of Robin’s favorite parts of his job as a Realtor is introducing people to the community of Ojai. “I love giving people an introduction to Ojai, introducing them to the people and businesses I’ve had the luxury to know — to give them a handshake into the community,” Robin said. He loves being able to help newcomers orient themselves in the valley. “The weather patterns, the hiking trails, where to go play golf, go horseback riding,” he said. He also loves helping with the important details, too — things like recommending trustworthy babysitters, nannies, and dog- and house-sitters, “things it can take you years to find out,” Robin added. But his clients know they can just pick up the phone and he’ll point them in the right direction. And if his clients happen to be selling their homes, he’s able to connect them with his tried-and-true network of local resources to help them make the best sale possible.

Thanks to this network, he’s earning a reputation as a guy who can complete the sale fast. While Robin can help buy or sell any area property, “Currently I seem to be doing a lot in the luxury market,” he said, especially with homes that have been on the market for a while. He’s been getting called in to help figure out how to get those properties across the finish line. One example he gave was a home at the top of Daly Road. “It went through four agents in three-and-a-half years,” he said. After just a few months with Robin, the beautiful, unique property is now in escrow. “You gotta have a great team around you to provide the level of service that’s really demanded nowadays,” he said.

And he’s made some great friends in the process. “That’s how I measure my success — not in dollars and cents, or numbers and metrics. It’s the friendships I’ve made,” Robin said. “This is the part of real estate I was less aware of, but am extremely grateful for now.”

He’s also grateful for the community as a whole, and how it allows him to enrich his relationship with his 10-year-old daughter, Josie. They love going to Bliss Frozen Yogurt and to Westridge to make their own custom pizzas, just as much as they love hiking on Shelf Road and cruising around the golf courses at Soule Park or the Ojai Valley Inn together (where Josie loves to help repair divots). “Raising her in Ojai — it’s absolutely a luxury I do not overlook. It’s the little things … just getting to chat together. And what a wonderful place to do it!” Robin said. “We feel so at ease. It’s such a comfort raising her here.”

It’s a comfort he pays forward in the form of community participation and volunteerism. Playing in golf tournament fundraisers, helping raise money for the Ojai Valley Land Conservancy, “helping a college kid who needs money to buy books — anything,” Robin added. “Once you get into that role of helping, your phone’s never dead … That is something I pride myself in doing, and will continue to do.”

But, he emphasized, he’s not the only agent in town who gives back. They all have a common goal, he said. “We have some fantastic Realtors in this community. It really is a wonderful, NICE community, who are working together toward a common goal … it’s not about us, it’s about the clients.” Helping clients find their little piece of paradise here is hugely gratifying. “If you still have that spark in you, like a little kid who just enjoys watching the sun coming up or going down, taking deep breaths, and a sense of peace, you’ll get that here in Ojai,” he said. “It’ll reward you for the rest of your days.”

For more on Robin and to view his current listings, visit Ojairobin.com