I love this time of year.

The plants are just starting to wake up, turning the hills an increasingly vibrant shade of green. In some places, the wildflowers are already starting their show. And with all the rain we’ve had so far this season — 20 inches in Ojai and 34 inches up at Nordhoff Ridge, according to the Ventura County Watershed Protection District — there’s actually
water flowing! 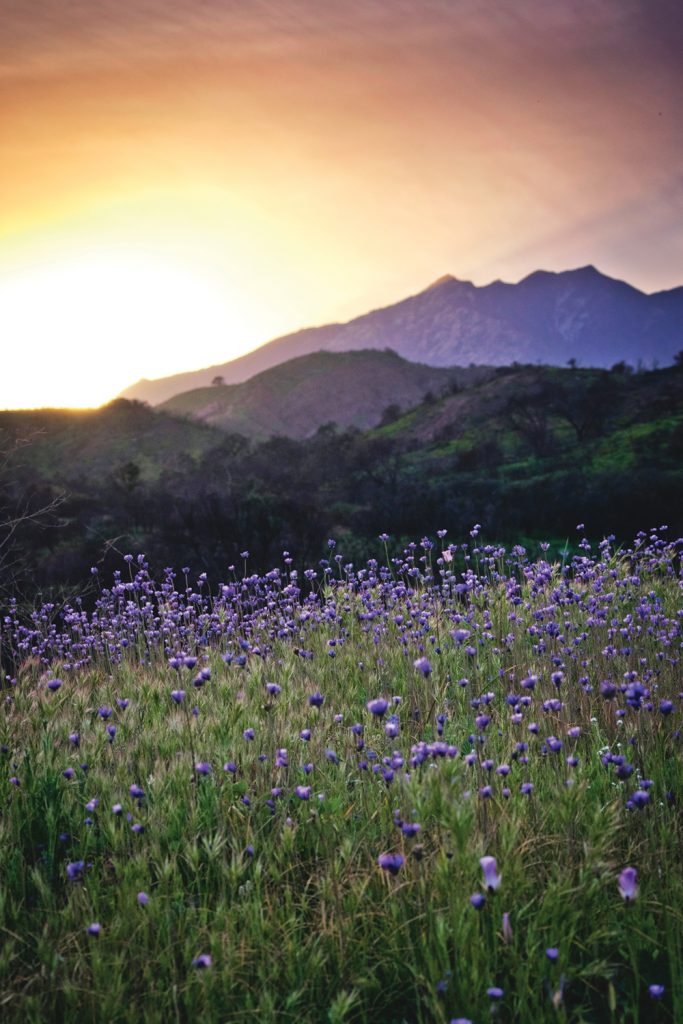 Blue dicks wave in the breeze last spring at the Ventura River Preserve.

Happy creeks on every side of the valley and temporary waterfalls above town make this one of the most magical times to get outside and take a hike. And when you do, you’ll probably be on one of the Ojai Valley Land Conservancy’s trails. That’s because the nonprofit organization manages 27 miles of Ojai Valley trails through 2,300 acres of open space — 2,000 of which is open and free for public access. 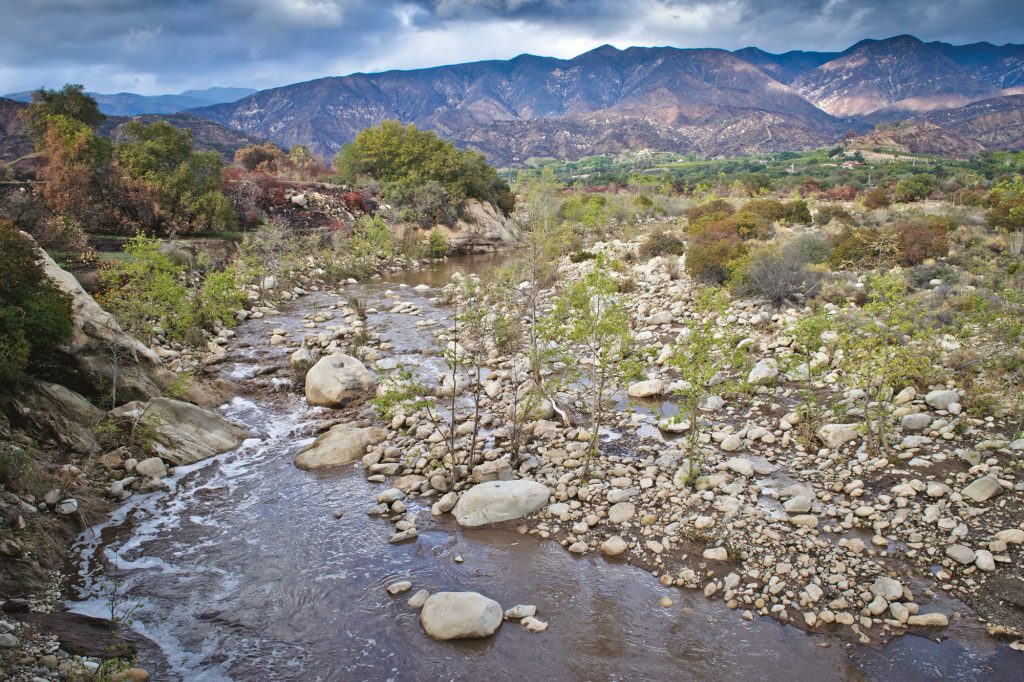 The OVLC is working to preserve more of the Ventura River, and with views like this, it’s no wonder!

All told, that’s five times more than the city and county combined. OVLC trails wind all over the valley, from the Ventura River Preserve in the west, to the Valley View Preserve to the north, and even into the east.

Pretty impressive for a small-town land trust. So impressive that people drive for hours just to experience it first-hand. That was a realization Tania Parker had while leading a hike in conjunction with REI. “People came from all over the place! The nearest person drove an hour to be there,” said Parker, OVLC Director of Advancement. Many of them “didn’t know where to go, didn’t know how to read trail maps. They’d fallen in love with the outdoors, but were just super inexperienced.”

The realization that most of the world didn’t grow up in hiking boots spurred the OVLC to expand its Trail 101 program. These guided hikes will take you through different OVLC preserves — for free! 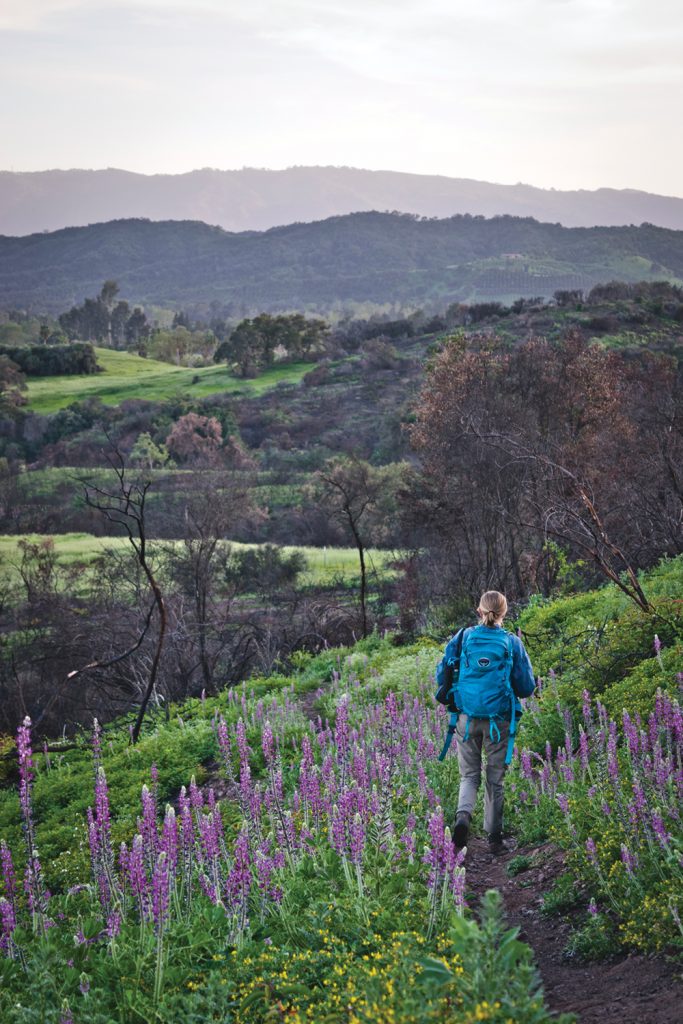 Last spring, the Ventura River Preserve gave us tons of lupine, and this year brings a promise of even more.

On the schedule so far: two wildflower walks (March 16 and April 12) and a birding and natural history walk (April 6) in the Ojai Meadows Preserve, as well as an exploration of Wills Canyon and El Nido Meadow (April 27 and June 18) in the Ventura River Preserve. There’s also a wildlife tracking class in the Ventura River Preserve on March 16 ($10 per person and free for OVLC members and students). Want to go deep into local ecology? Check out the California Naturalist courses. This 40-hour course includes plenty of time outside with guest lecturers and project-based learning that results in a California Naturalist certification. 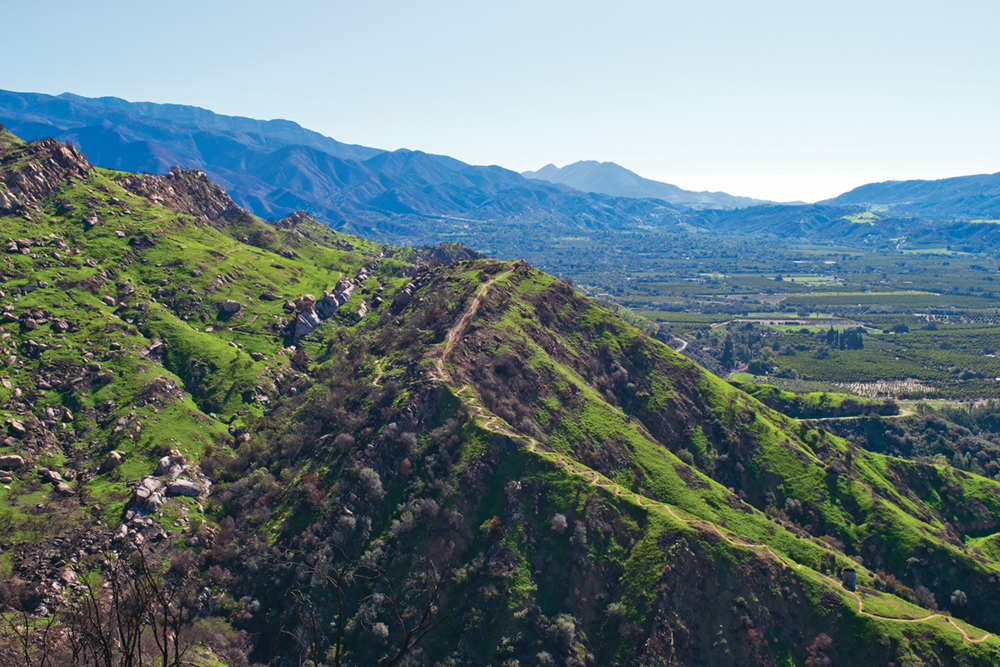 Parker is especially excited about the upcoming Women in the Wild event on March 9. In honor of International Women’s Day, the ladies of the OVLC will be leading a number of events (and not just for women!). You can do some sunrise yoga on the Valley View Preserve, help build a trail, work up a sweat on the Girls Gone Wild(flower) hike, take the kids for a walk in the Meadow, or hone your backcountry skills in conjunction with REI. In the evening, OVLC takes the party to the Ojai Rancho Inn for the Women’s Adventure Film Tour.

Whether you get involved with OVLC events or just get out on their trails, there’s plenty to learn and discover. This time of year, Parker loves going through the Ventura River and Ojai Meadows preserves. “I just like to pop down to appreciate water in the river,” she said. “And the pond is super full at the Meadow … and even the vernal pools are full right now!” 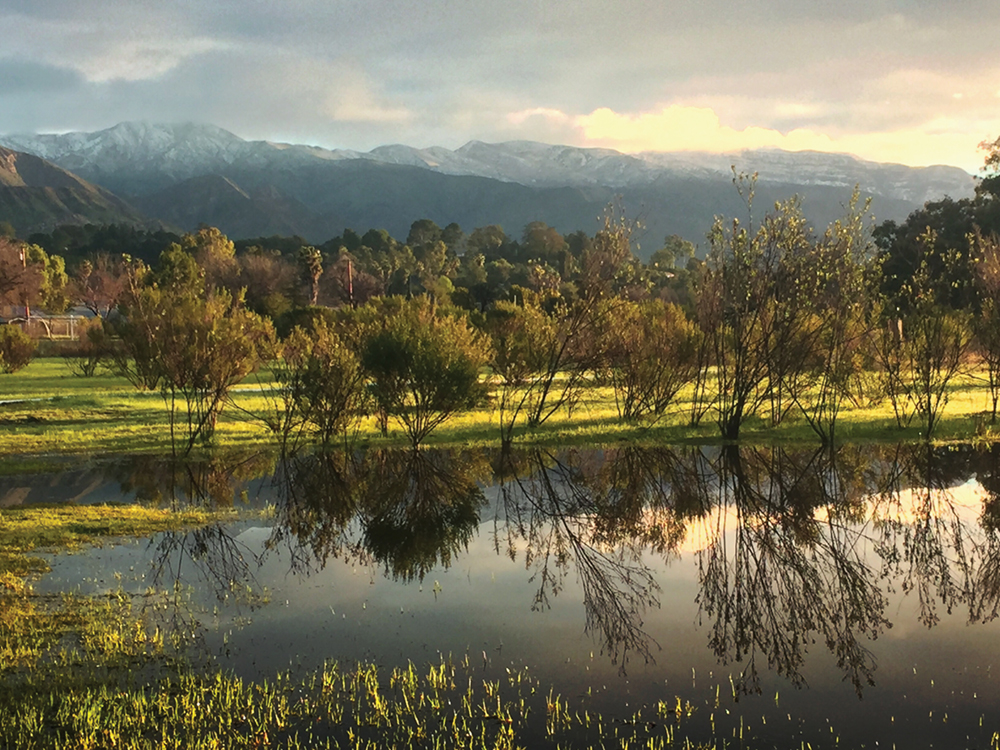 Thanks to all the rain we’ve gotten this season, the Ojai Meadows Preserve is doing its job as a restored wetland.

The Meadow is a “sleeper spot,” she said, even though it’s easily accessed. It’s adjacent to Nordhoff High School and is an easy, mostly flat hike. A restored wetland, the Meadow is a hot-spot for dozens of bird species (raptors, egrets, quail, bluebirds, mallards, sparrows, finches), dozens of types of wildflowers (my favorites: lupine, Indian paintbrush, California poppies, purple owl’s clover and sage) as well as frogs, squirrels, rabbits, skunks, butterflies, bobcats, and even weasels (though the latter are rather elusive, Parker said).

If it’s a good workout you’re looking for, Parker said, head for Luci’s Trail, off Shelf Road. The series of switchbacks pay off big-time with amazing views. Also off Shelf Road is Fox Canyon Trail, which connects to several other trails like Foothill and U.S. Forest Service Trails. Wilson’s Point, just past Luci’s Trail, also offers a killer vantage point.

Be sure to check out the OVLC website for maps, photos of plants and animals, and even a real-time Trail Finder (ovlc.org/trailfinder).

All this awesomeness is brought to you not only by OVLC staff, but by the hundreds of volunteers who pitch in — at the office, at events, and on the trails. Last year alone, they put in more than 5,000 hours, and they’ll likely tally a similar number this year, as the increase in rainfall will mean more trail repairs.

Parker is proud to be part of a growing movement to protect open space in the U.S. “California has 150 land trusts protecting
2.5 million acres,” she said. There’s at least one in every county. “And on a national scale, in 2015, land trusts (stewarded) 56 million acres. That is double what’s in all the national parks
in the lower 48 states.”

Open space — it’s good for the economy (think of those tourist dollars!) and it’s just plain good for your soul, too. So get yourself outside and experience it first-hand. Find out how at ovlc.org.