Growing up, we were told not to go into that field next to Nordhoff High School; it was trashy and full of questionable characters (well, as questionable as they got in Ojai).

It now boasts an incredible array of native plants, birds, and other animal species, making it a gem that many people (even locals) barely know about. It’s one of my favorite spots to take family portraits, or just to take a walk and explore. 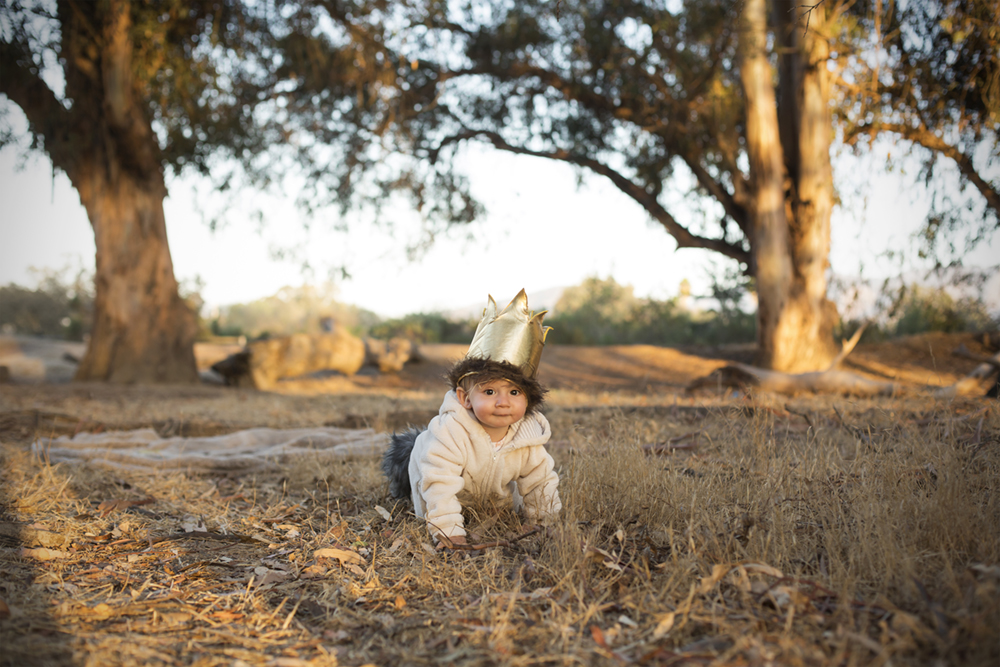 Although home to dozens of plant and animal species, we recently spotted a different kind of wild thing in the Meadows Preserve — 1-year-old Knox Offerman.

And all that is thanks to the Ojai Valley Land Conservancy. Stewards of about 2,400 acres, the OVLC acquired the meadow 11 years ago and began restoring it to its natural glory.

Before Tania Parker began working with the OVLC, she was among those who had no idea what the Ojai Meadows Preserve actually contained. It wasn’t until her husband, Tobias, suggested they go bird watching “at the pond” that Parker discovered the area’s riches.

“I was like, ‘there are no ponds in Ojai,’” the future OVLC director of advancement recalled. “But I’ll never forget — it was springtime, in the evening, and we rounded the corner, and there was this gorgeous pond full of ducks, waterfowl, all kinds of birds. And I thought, ‘HOW could I live here and not know this existed?’” 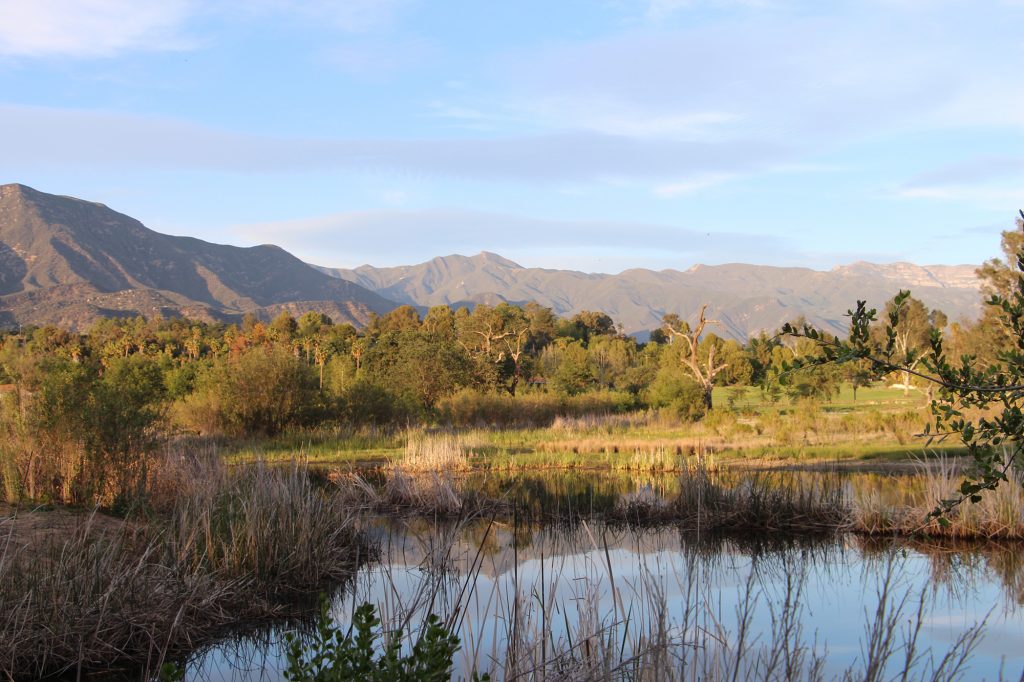 Incredible views of Chief Peak (center) and the Topa Topas (right) frame the pond and give the sense that you’re far off the beaten path — even though you’re less than a 1/4 mile from Maricopa Highway.

That was a pivotal moment in her life, one that would lead her to work with the OVLC. She’s now in charge of spreading the word about the nonprofit organization, working with a team that manages 27 miles of trails. That’s five times more free, public access land than the city of Ojai and County of Ventura combined. “I really like that stat,” she laughed.

And yet, the Ojai Meadows Preserve remains one of the area’s best-kept secrets. As Parker said, “If you don’t know (about it) and you’re driving through the area, in a lot of ways it does still look like a dirt field. Unless you get out of the car … You don’t expect to see the restoration that’s happened!”

In early 2017, when California last got a decent amount of rainfall, the state exploded with wildflower hunters. My husband, Logan, and I spent just about every weekend that spring camping and hiking, lugging camera equipment from the Eastern Sierras to Figueroa Mountain to Carrizo Plain National Monument.

Turns out we could’ve seen a spectacular show, and saved a lot of gas, less than 5 minutes from our front door.

Orange California poppies are iconic in the southland, but they are just one of the many species of wildflowers that can be seen in the Ojai Meadows Preserve each year.

“It was stunning, and it kept changing throughout the season,” Parker recalled, as I listened enviously. “Tidy tips, goldfields, owl’s clover — the show kept going and going. People were spreading themselves all over the state going crazy, and they had no idea they could just pull over and take a walk through the Meadows!”

Dozens of wildflower species can be found in the Meadows Preserve. It has been carefully and painstakingly replanted with native species, cultivated in the greenhouse on the west end of the 58-acre property. Occasionally (usually in the spring and early fall) the greenhouse will open its doors to the public for native plant sales.

Even in autumn, there’s plenty to enjoy out at the Meadows Preserve. There’s still some yellow tarweed and purple vinegarweed blooming, and the mostly flat trails make it accessible even to toddlers and those with limited mobility. And the golden late-afternoon sun that filters through the oaks and eucalyptus bathes everything in a magical, buttery light. 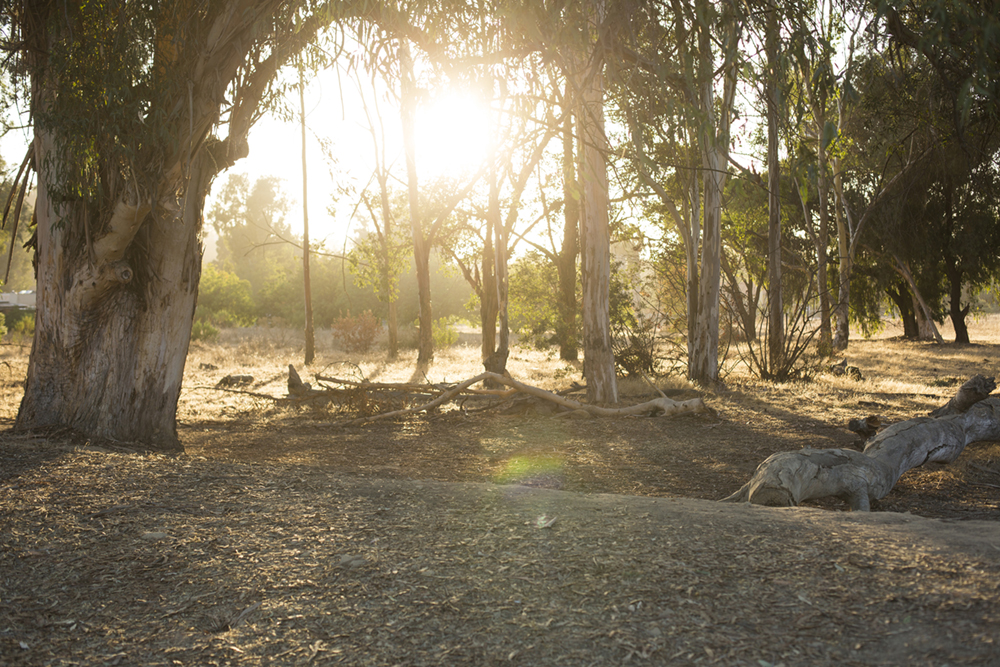 The wildflower show is mostly done, but the late-afternoon sunlight filtering through the trees transform the Meadows Preserve into a magical place bathed in buttery light

But I mean, really any time of year at the Meadow is prime time. Butterflies, skunks, rabbits, weasels, and even bobcats are all visitors to (and often residents of) the Preserve. According to Parker, the runoff from the surrounding meadow means that even one inch of rain can fill the pond, making it an ideal bird watching spot. Goldfinches, sparrows, woodpeckers, hummingbirds, ducks, and a variety of raptors, among many other species, frequent the area, even when the pond dries up (as it is now). In December, the OVLC will host a walk to view birds migrating for the winter. It’ll be a chance to see birds rarely seen around here at any other time of year.

Left: What’s cuter than a baby owl? Two baby owls and a watchful mother, curiously peering over the edge of their nest in the Ojai Meadow Preserve

Right: Roadrunners are among the dozens of bird species you can spot in the Ojai Meadow Preserve.

I like to say that we’re incredibly spoiled in the Ojai Valley, with all of this natural beauty surrounding us on every side. But maybe I should amend that statement and instead say how incredibly lucky we are to have folks working so hard to preserve and restore that beauty.

To learn more about the Ojai Meadows Preserve and the OVLC’s many other preserves and trails, check out their website at ovlc.org.