When I first met Jack Dyer, he and his wife, Kelley, had recently moved to Ojai with the dream of starting a brewery here. As a local journalist (and, I’ll confess, a craft beer lover) I followed Jack and his business partners through their attempts to develop a taproom on a parcel east of the Park and Ride. For a variety of reasons, the project never quite got off the ground. 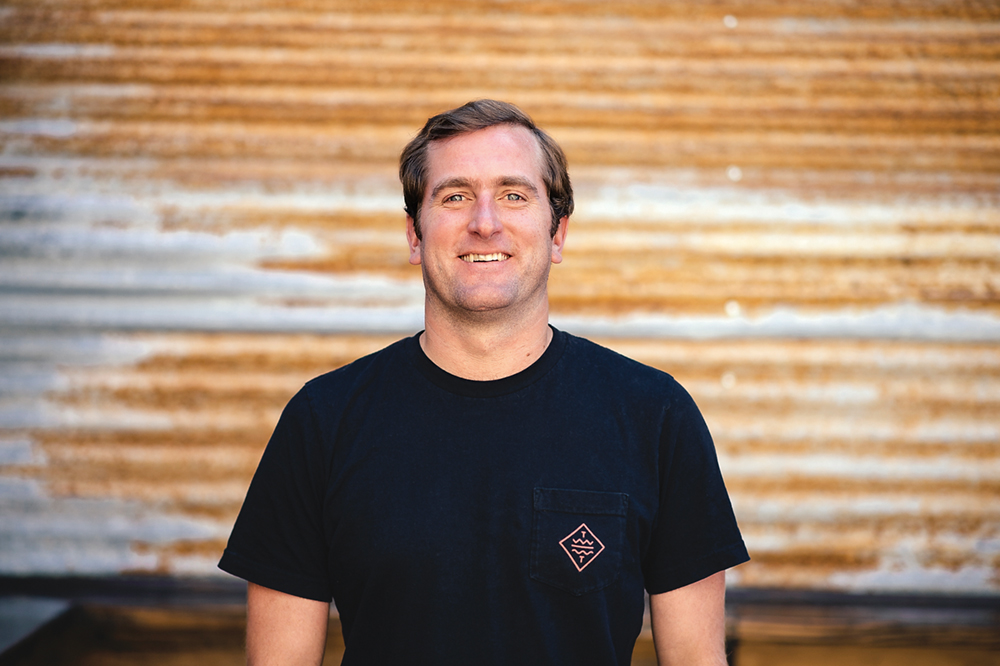 Oddly enough, that actually wasn’t such a bad thing.

Jack and his partners turned their focus to Ventura, where they found an ideal spot near the beach for the first Topa Topa Brewing Company taproom. About a year later, they began plans to expand to a second taproom, this one in Santa Barbara. While those two locations kept them plenty busy, Ojai was still on their minds.

“We always knew multiple taprooms was part of our business model,” Jack said. “We love entrenching ourselves in communities, putting down roots in those places — and Ojai is our home.”

So the hunt was on for another location in town. The corner of Montgomery and Ojai Avenue presented an intriguing opportunity. Located in the heart of Ojai’s historic downtown, it had been a dry cleaners for decades, and before that, a gas station and repair shop. The repair bay in front was paved over when the gas station left, becoming a couple of (rather awkward) parking spots for folks to drop off and pick up their dry cleaning.

The Topa Topa guys envisioned transforming that space into a patio where folks could have a cold brew and people-watch, where they could take in the life of downtown while also enjoying mountain views. Fittingly, you can see Ojai’s iconic Chief Peak — their trademark IPA and my most favorite beer ever — from the taproom.

It took a few years, but in November 2018, Topa Topa Brewing Co. officially opened its doors at 345 E. Ojai Ave. 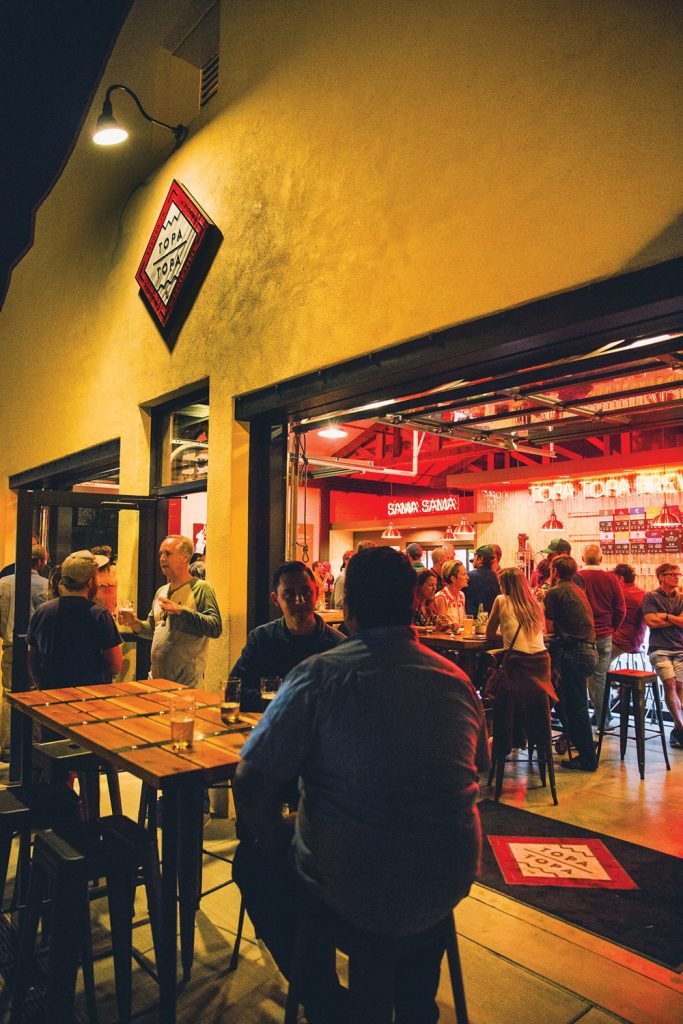 What once was a parking spot in front of the dry cleaners has been transformed into a cozy patio — the perfect place to enjoy a flight and people watch in the heart of Ojai.

What I love about this newest taproom, aside from the product, is that it has stayed true to the history of the building while also giving it a respectable facelift. “We wanted to breathe a little bit of the original design back into our design,” Jack said, pointing to the steel patio overhang and the roll-top doors, along with the addition of a low stucco wall bordering the patio that mimics the angles of the roof. “For our use,” he went on, “we wanted to make that corner a little more vibrant. We love Ojai, and we love the downtown corridor, the charm that it has. And we thought that by putting customers out front and having an indoor-outdoor feel, it would add to the vibrancy and lead down to some of the other (Montgomery Street) businesses.”

They also wanted to incorporate food into the tasting room somehow. In Ventura, their parking lot is the perfect spot for a rotating list of food trucks. But that’s not possible in downtown Ojai, so they went in search of something different. They found it in Sama Sama, which serves up Indonesian-style food in the corner of the taproom.

“We were very cognizant of what already existed in town,” Jack said. “Being in a small town, and small business owners ourselves, and having our roots here in Ojai, we didn’t want to do something like another burger joint, another Italian restaurant. We didn’t want to duplicate what was already here. Indonesian food is unique, and isn’t available in town.”

And that type of food, Jack said, “Pairs surprisingly well with beer … We’ve done a bunch of beer dinners with them over the years, and we appreciate the food and their vibe and their work ethic. We take pride in our work ethic, and we wanted (a partner) with similar values.” 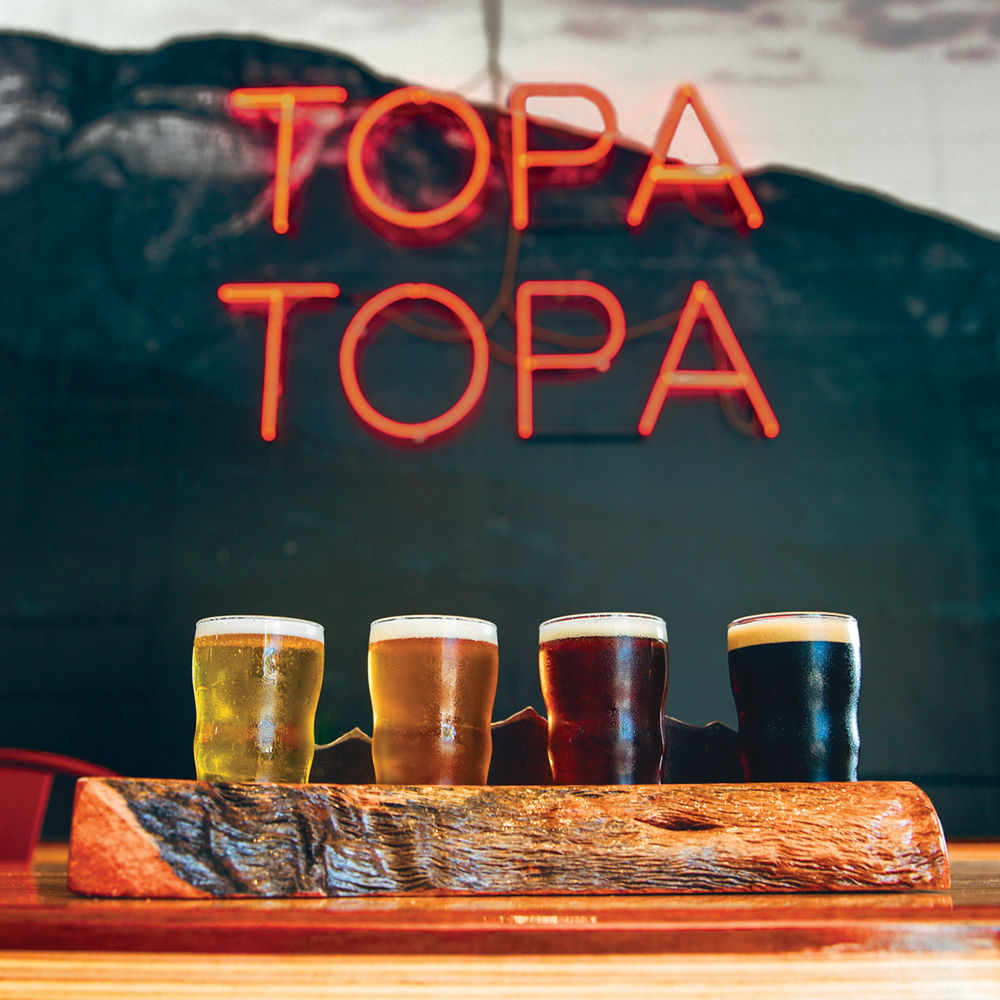 From the light Sespe Pils to the deep dark Tux, you’re sure to find a brew you love at Topa Topa.

Topa Topa Brewing Co. represents a growing segment of relatively new locals who “get it” — that is, folks who appreciate what the Ojai Valley is and are dedicated to keeping it awesome. So they give back, in myriad ways. Sometimes, it’s as simple as donating beer for a nonprofit to use at their fundraisers, like the Ojai Valley Defense Fund (side note, Jack also sits on their board of trustees). Jack recalled donating a keg for a recent fundraiser that brought in $15,000: “It’s cool to see the downstream effect of just donating our product!”

But they don’t shy away from bigger efforts. Late last year, they joined an effort spearheaded by Sierra Nevada Brewing Company to support victims of the Camp Fire by brewing a limited-edition beer called Resilience IPA. One hundred percent of sales went to helping Camp Fire victims rebuild.

They recently hosted a benefit for CFROG (Citizens for Responsible Oil & Gas) at the Ojai taproom, and sponsor the Ojai Valley Land Conservancy’s Telluride Mountainfilm Festival every year. In Santa Barbara, they’ve paired up with Heal the Ocean, as well as Toad and Co. Clothing on events to promote sustainable clothing. In Ventura, they’ve worked with the Eric Marsh Foundation and Ventura Botanical Gardens. They’re also supporters of Los Topa Topa is also a 1% for the Planet company, meaning they donate at least one percent of their sales to environmental causes. And even outside of the 1% network, “We focus hard on supporting causes that are important for each unique community (we’re part of),” Jack emphasized. “We support causes that are important to our customers and staff. And that’s been really fun to see it come alive.”

Padres Forest Watch (one percent of your Topa Topa Collective fees go right to them!), the Wilderness Youth Project, and the Ventura Land Trust — and that’s just within the last few months alone.

Supporting the arts is another important aspect to what Topa Topa does, with live music at least once a week at each taproom, as well as regular “Print Exchange” events, where artists bring prints of their work to swap (or sell). They’ve even got organic, recycled, and ethically-sourced gear.

All of that is nice, but let’s be real: they couldn’t do all this without having a damn fine product to back it up. And they totally do. Logan and I had kegs of Level Line and Cali Common at our wedding, and a “bride and groom’s growler” of Chief Peak for ourselves. Over the last couple of years, we’ve collected a shelf-full of growlers from all over California and beyond … but that Chief Peak IPA is still our jam. And the fact that we can get it super fresh, just minutes from home, makes me love this town even more. 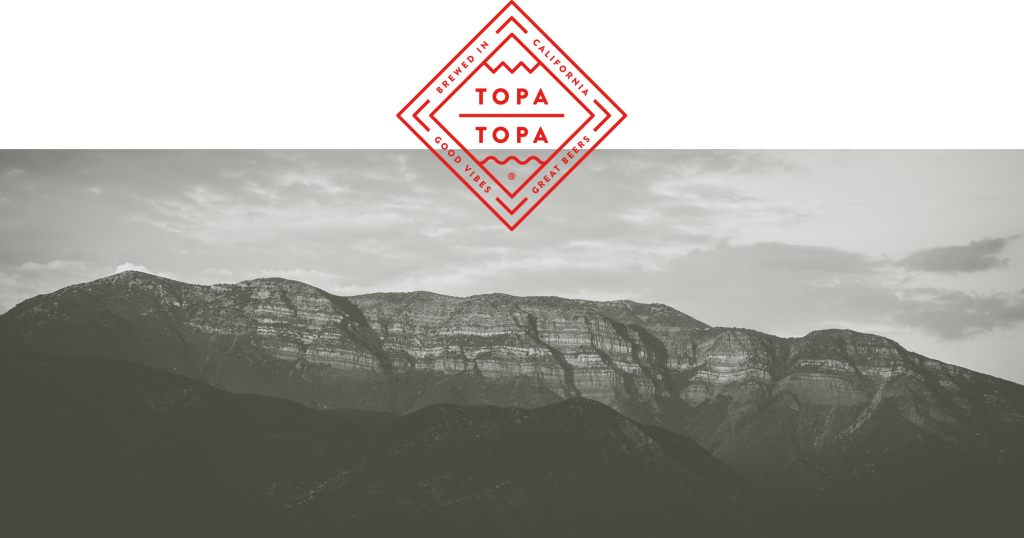 Stay up-to-date on all things Topa Topa Brewing Company by following them on Instagram: @topatopabrewingco. Or check out the calendars at topatopa.beer