Did you know we have bald eagles here in the Ojai Valley? And that it’s a pretty big deal, historically, in the county? 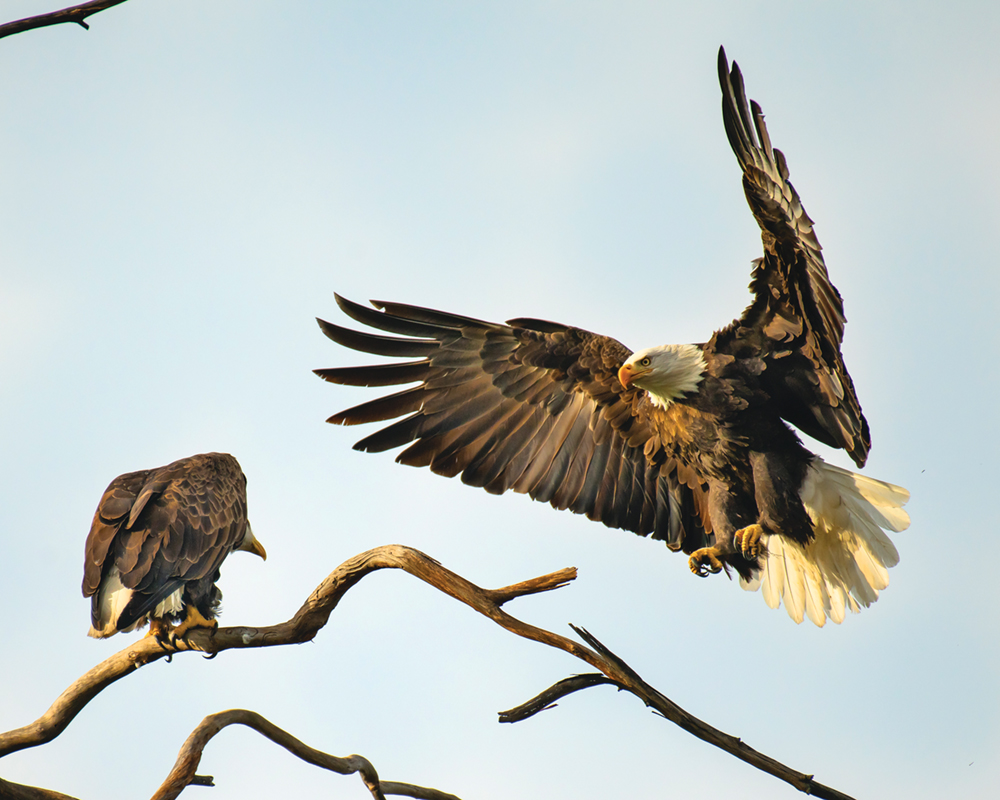 Photo by Mark A. Slaughter

The current bald eagle pair, in February, at Lake Casitas

In 2013, Ventura County witnessed something that hadn’t happened here since 1922: bald eagle chicks hatched on the mainland. For almost 100 years, the only location in the region that had seen bald eagle hatchlings had been out at the Channel Islands. But six years ago, two chicks, nicknamed C1 and C2, made their debut at Ojai’s Lake Casitas. Ever since, a small but dedicated group of people have been keeping a watchful eye — and some hefty cameras — on a cluster of eucalyptus trees in the lake’s Wadleigh Arm.

This group of passionate amateurs have spent countless hours tracking the movements and behaviors of these history-making raptors, and sharing their photos and videos on their Facebook page, Lake Casitas Eagles, since 2013. It’s been a fascinating (and at times, heart-wrenching) read through the years, with stunning photos and detailed notes on the bald eagles’ movements and behaviors. The almost 2,000 page-followers have seen the mating pair hanging out near the nest, soaring majestically through the morning mist, catching fish from the lake, collecting nest building material, shooing off intruders, helping their eaglets fly for the first time … it’s been like a National Geographic-style soap opera, one we can watch live, right here in the Ojai Valley, with only a pair of binoculars or a decent zoom lens.

Linda Frasier, one of the founding Lake Casitas Eagles group members, first spotted bald eagles at the lake in late 2010. They took over what had been a great blue heron rookery. “The male was probably just under 4 years old,” said another group member, Judy Hillewaert. “We could tell by the plumage. They fully mature when they’re 5. And Linda started noticing these behaviors — nesting behaviors! They had their first successful clutch in 2013, when two eagles fledged (flew for the first time).” Several eaglets have hatched since then, usually one or two per year. A group of local enthusiasts — Linda and Judy, along with Sally Carless, Dave Schaar, Bob Massey, Mark Slaughter, and John Hannah, among others — have kept a keen eye on the site.

And now, it’s about to happen again.

“They’re on eggs now!” Judy said. Near the end of March, things will get really exciting, when the eggs are due to hatch. “We think February 22 was probably when the eggs were laid, but we won’t know until they hatch,” Judy added. “It takes between 35 and 37 days to hatch, and typically two eggs are laid.” With their nest high up in the eucalyptus tree, how will we know when they hatch? “There will be a change in behavior when there’s a hatchling,” Judy said. “We’ll start to see the female up a lot, and food brought in to the nest.” The eaglets will fledge at about 12 weeks old. “That’s the most exciting time — to watch them fly for the first time!” Linda enthused. A short time later, they’ll leave the nest for good. And where will they go? We don’t really know. Because these bald eagles aren’t tagged like those born in the Channel Islands, making positive identifications once they leave the nest is difficult. There have been occasional sightings near the lake of juveniles (which don’t get their white heads until their fifth year), but generally, they’ll find their own territory. 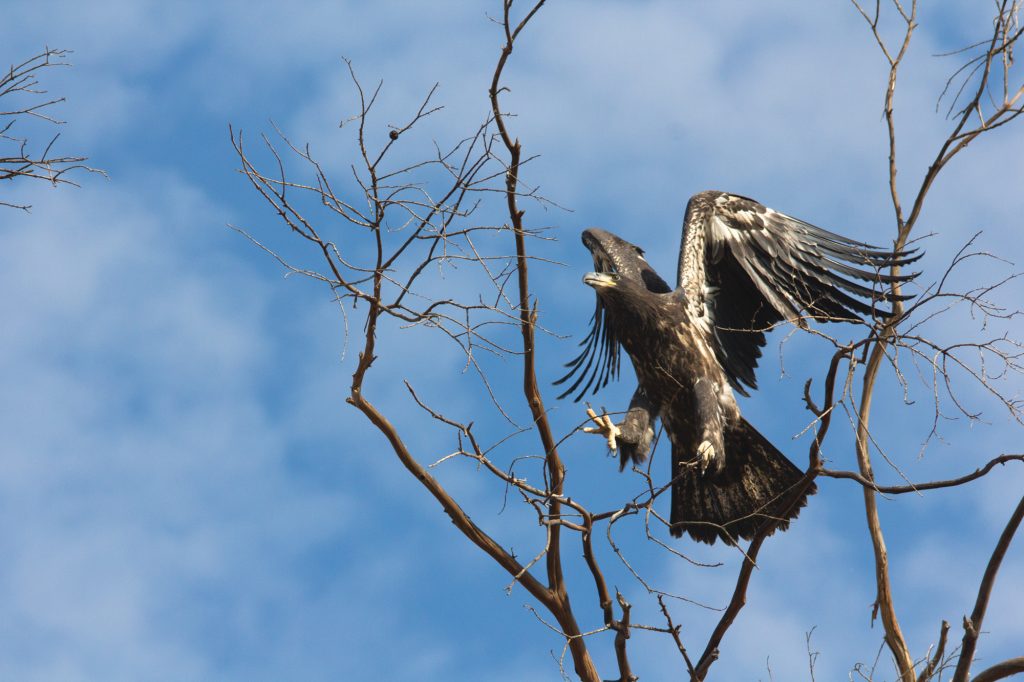 The 2017 fledgling spreads its wings.

Things have changed in the Wadleigh Arm nest over the years. While the same male has remained at Lake Casitas since 2010, a new female came in early 2015. “She ousted the first female. She beat her up and killed the two babies” that were just hatching, Judy said. The new female is a well-known entity to Judy — she watched her hatch, on a live webcam on Catalina Island, in the spring of 2009. “We know her exact history!” she enthused. “She lost her ‘wing bling,’ but she still has bands around her legs.”

As fun as it has been to follow the Lake Casitas Eagles page, it’s been even more fun for Judy and her pals to capture the action. Recently, she said, “I was sitting at the marina, and watched the male catch a fish. It was so close up! I had my camera, but I was so excited I didn’t get a clear shot,” she chuckled.

Judy also enjoys being able to share the fun with lake visitors. At least one person from the group is out at the site almost every day. “It’s been wonderful to educate people hiking and walking in the area,” Judy said. “They’ll ask us, ‘What’s up there?’ and we’ll tell them, ‘A bald eagle nest!’ And they’ll say, ‘Oh my gosh, we were just camping, we had no idea there was a bald eagle nest here!’ So it’s been fun to answer questions, and make sure people keep a certain distance from active eagle nest habitat.”

The group has continued to educate folks on the Facebook page, where they’ve begun sharing basic information about bald eagles from raptor specialists. “It’s stuff you wouldn’t find if you were to just Google it,” Judy said. Sharing their love for bald eagles and spending so much time together has brought this group together as more than just nature nerds. They’ve become good friends. They’ve gone on excursions to other locations together, like visiting the female great horned owl in the Ojai Meadows Preserve and checking out the elephant seals when they invade the beaches of San Simeon. They’ll also get together for slideshows of photos and videos that members have shot while on vacation. But in the end, it’s the bald eagles that keep them together. “A handful of us, we’ve been devoted to the Lake Casitas Eagles since the beginning of time,” said Judy. “It’s just a passion.”