I’m not proposing a new TV show (though it would totally kill); I’m speaking factually. There’s just a lot of talent around here. Artists, musicians, actors, we have them all in droves. Whether it’s our proximity to Los Angeles or the spiritual energy vortex I’ve heard exists here, or something else, we’re blessed to live in a place where the arts are alive and more than kicking.

I was reminded of this recently while watching the Ojai Art Center’s production of Mamma Mia. Holy wow, friends — this one was epic. A delightful set, a fantastic live band, and actors who can bring down the house with their singing and dancing chops … it all culminated in one of the best pieces of theater I’ve ever seen.

Epic moments abound when you have this much talent packed onto one stage. (Photos by Stephen Adams/www.stephenadamsphoto.com)

And I’m not just talking about community theater pieces, I’m talking, like, ever. Each role was perfectly cast and the chemistry on stage was palpable. But the thing that really knocked it out of the park was just how much FUN everyone was having up there. I’ve never seen a performance where the actors enjoyed themselves more. It was infectious and magical and awesome, and all of the other enthusiastic adjectives. I’d go see it again if it wasn’t completely sold out for the rest of its run. In fact, it sold out every single show — all 17 of them. 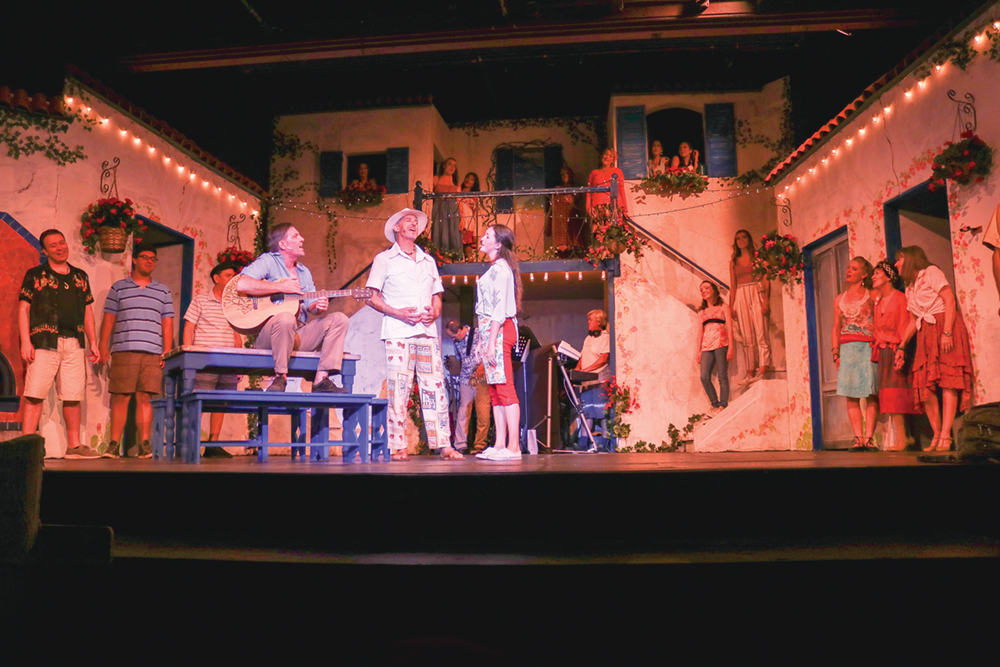 Chisholm (Harry), West (Bill), and Nichole (Sophie) belt it out with the company.

That’s not surprising, given the level of talent on stage. Asunta Fleming sublimely blends can-do strength with vulnerability as mother Donna. ABBA’s music asks a lot of a person’s pipes, but for Asunta and her incredible range, it all seemed effortless, even as she hopped on the bed and ran up flights of stairs and danced her sparkly pants off. Her sassy, don’t-need-no-man gal pals are played to perfection by Dianne Miller and Anna Kotula, both of whom are also ridiculously talented vocalists.

Look up “stage presence” in the dictionary, and you’ll find this picture of Asunta Fleming.

Then there’s Nichole Riffenburgh as Donna’s daughter, Sophie, who displays her vocal prowess from the beginning moments of the musical all the way through to the end. Sophie’s possible dads, played by Nigel Chisholm, Smitty West, and Shayne Bourbon, sure can belt them out, too.

You’re probably noticing a pattern by now — they can all sing, and damn well, too. But, of course, it’s not all about the music; there’s a sweet and silly but also distinctly relatable story line that weaves through the play. While onstage, bartenders Pepper and Eddie, played by Joe Hidley and Hayden Miller, steal the show with their boyish antics, tempting Kotula to go full cougar with their on-point flirtations. There were so many little side plots — some acted out with just a few dance steps, or coy looks — it was impossible to absorb them all. I’m sitting here smiling like an idiot, just thinking about it. 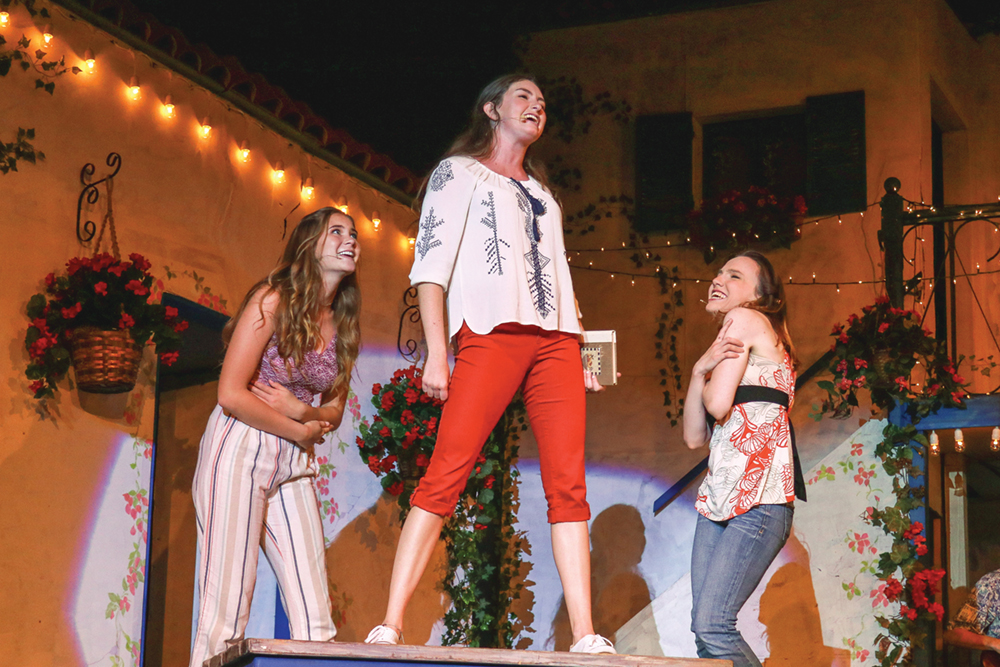 Right from the start, “Mamma Mia” explodes with music. From left are Shannon David as Lisa, Nichole Riffenburgh as Sophie Sheridan, and Kisea Katikka as Ali.

Director Tracey Williams Sutton, along with co-producer Herb Hemming, vocal director West, and musical director Andy Street, have pulled off something truly distinctive.
And here’s the thing: These people are volunteers. These performances don’t put bread on the table (although I bet they’ve put a LOT of flowers up there). They just do it for the love of theater. 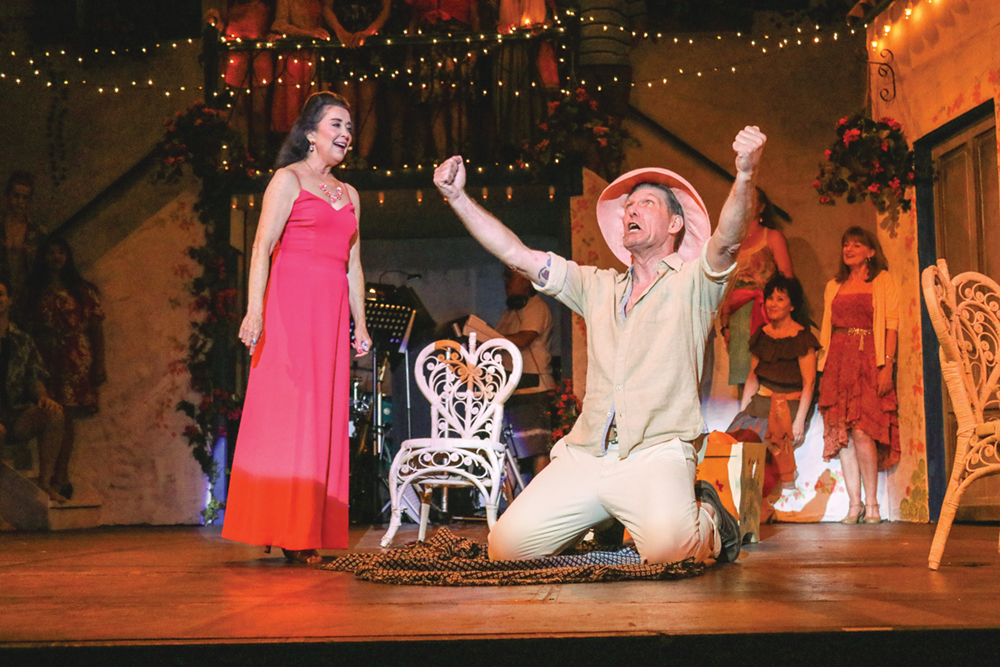 But that’s Ojai for you: a place where a tiny, 80-year-old nonprofit organization with a tiny little theater space can pull off something Broadway-worthy. A place where, just as importantly, the locals appreciate and support their stellar efforts.

While you may be out of luck for Mamma Mia, you can still check out photos from the performances (and some behind-the-scenes) by freshly-minted Ojai Living Treasure Stephen Adams, at stephenadamsphoto.com. Expect more from Adams in the future; he’s just been named chair of the Art Center’s Photography Branch. 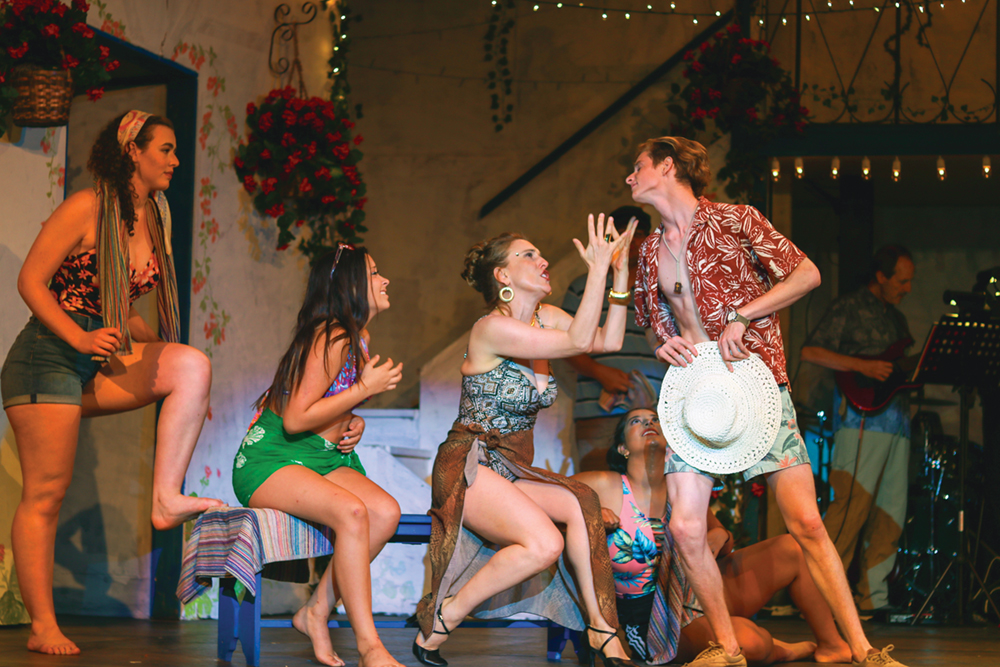 Joe Hidley, as Pepper, flirts mercilessly with Anna Kotula’s Tanya, who tells him, “Down, big fella. I’m old enough to be your mother.”

And there’s more coming down the pipeline this season from the Theater Branch. Up next for the Ojai Art Center Theater is Annie, Aug. 8 to 11, featuring an all-kids cast (even Daddy Warbucks) directed by the incomparable Gai Jones and produced by Lin Coleman. I’ve seen some of these kids onstage before, and they bring the guarantee of a great show — not to mention a fresh crop of actors for future adult performances. Sept. 6 through 29 is an original play Bless Your Heart by Richard Camp, about family, evolutionary biology, and Elvis. Then comes Seussical, The Musical, Nov. 22 to Dec. 15, featuring the world of Dr. Seuss.

There’s lots more going on at the Ojai Art Center. Through the end of the month, artist Duane Eells is displaying his solo exhibition, “Dance,” featuring dancers and their stories as told through the medium of oil paintings on canvas. Works by the late Marta Nelson are also on display.

Check out ojaiartcenter.org for the full lineup of events, performances, and classes.