A darker shade of blue

If you’ve driven through town recently, you might have noticed something different at the corner of Country Club Drive and East Ojai Avenue. The Coldwell Banker sign — a fixture there for the last quarter-century — has been replaced with new sign, reading LIV Sotheby’s International Realty. 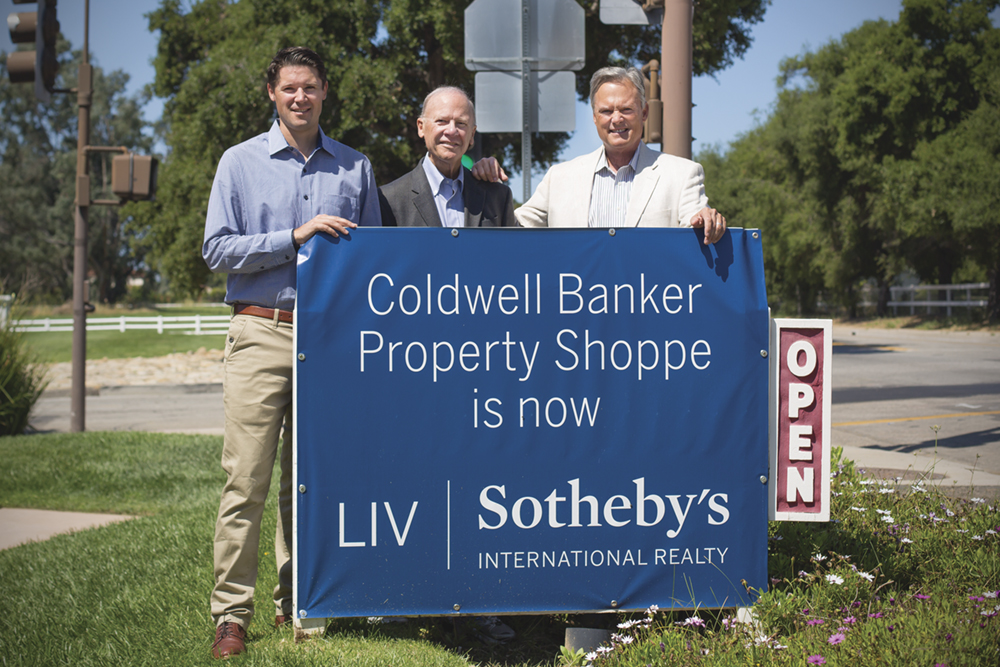 That’s a big change for this little town. Ojai’s Coldwell Banker Property Shoppe has been around since 1986. Its tireless leaders, Larry Wilde and Dennis Guernsey, have worked together since 1978, and mentored dozens of real estate agents in that time — including Larry’s son, Erik. Despite selling millions of dollars in real estate each year, they’ve always prided themselves on being that trusty neighborhood mom-and-pop-style real estate office.

Why the change now? Larry recently turned 66, he said, and it was “Always my plan, on my 66th birthday, to relinquish control to Erik … And it just so turns out, our franchise agreement was up at the same time I was gonna be 66.”

So Larry, Dennis, and Erik — a successful Coldwell agent in his own right — began to explore their options. The decision to make the switch from Coldwell to LIV Sotheby’s was not one they took lightly. It had to be with the right company, and for the right reasons, said Erik, who now serves as the managing broker for the office.

“Larry, Dennis, and I had been researching what’s out there,” Erik noted. “We met with literally every brand out there — Compass, Berkshire, all the big companies — to find out what would be best for our agents and our community.” Staying with Coldwell, he added, “could’ve been more money from a Larry-Dennis-and-Erik standpoint. But we know what our agents need, and we couldn’t provide that (as Coldwell).”
It wasn’t just about finding a brand that understood boutique markets like Ojai. If you’ve been here more than five minutes, you know this is a pretty special and unique place. So the Coldwell guys had to find a brand that had lots of options to help them expand, while also not forcing a one-size-fits-all philosophy.

In the end, they decided on a partnership with LIV Sotheby’s International Realty. “The LIV team is the best for our agents and the future of the office. That’s 100 percent why we did it. That sounds cliché, but it’s true! We’re a franchisee, not corporate. LIV gives us the flexibility to do what’s best for Ojai. It’s really all the same flexibility as before, just with much more access to tools and resources to help our agents help their clients.”

Erik said he appreciates LIV’s skill in applying big, international resources in a customizable way that would allow them to work on a small scale. “Running the Coldwell office the way we had it, it was great. But we didn’t know the macro scale … We’re in little old Ojai, we don’t know what’s out there. So we partnered with a team that DOES know what’s out there. They know the latest and greatest for what’s available. It gives us a leg up on where we were. It broadens our spectrum for marketing and distribution.”
For their agents, Larry, Dennis and Erik see the transition as an excellent opportunity. “We were always very, ‘Let us know if you need us,’ here as a bumper rail for them (agents),” Erik explained. “But there wasn’t any formal training process. There weren’t any formal tools and resources to help them grow their business … with them (LIV Sotheby’s), there’s a lot of training, a lot of systems available to help agents represent their clients to the best of their ability.” 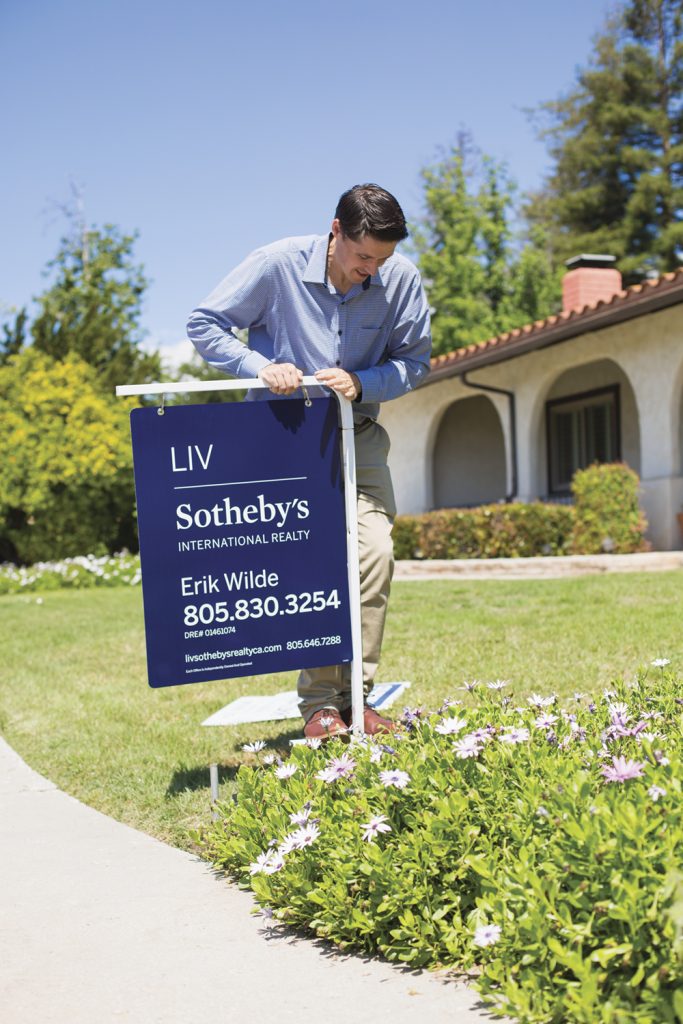 Agents can continue marketing just in this region, but they also have the potential to market a property in other areas and even all over the world, with built-in, tried-and-true resources. “The listing exposure internationally through the LIV network is huge,” said Erik.
For those who have known Dennis, the Wildes, and their fellow agents as Coldwell for decades, Erik understands there might be some skepticism with this change. But don’t be deterred by the word “international” in their new name. “It’s a darker shade of blue,” Erik added, “but we’re still the same agents.”

“It was a change in name, but the faces are still the same,” Dennis said.

“But with more back-office support,” Larry added, “which is a benefit to our agents and to our clients.”

Just because they’re scaling up to a brand represented in more than 70 countries doesn’t mean the guys-formerly-known-as-Coldwell will only work with luxury properties.

“Some people assume Sotheby’s only does high-end, but that’s not true. They do quality,” said Erik. The Ojai LIV Sotheby’s will still service the entire Ojai Valley market at all price points, from a small mobile home to $10 million-plus estates. “We’re still going to service each end of the spectrum, as far as pricing,” Larry said, “just like Coldwell Banker was.”

“For most people, it’s the biggest asset they’ll ever buy or sell,” Erik said. “The price point is irrelevant. They need a professional. When you hire a LIV agent, you get the whole LIV Sotheby’s team.” 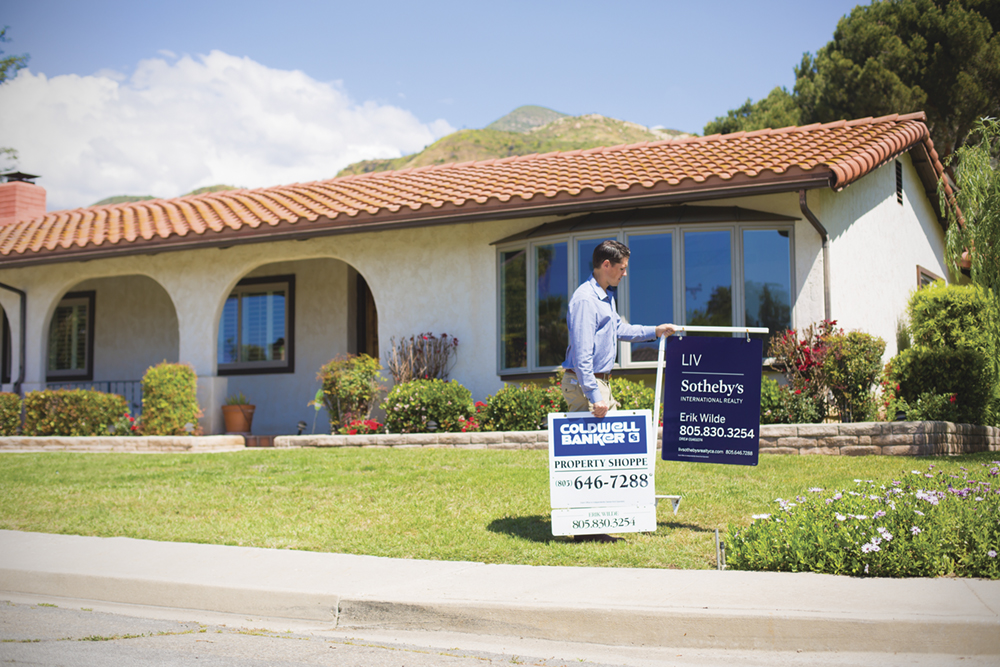 In with the new: Erik Wilde updates the signage on a property at the corner of Daly Road and Andrew Drive. Wilde says the new franchise comes with new opportunities for buyers, sellers, and agents alike.

As the market changes, LIV Sotheby’s will help the office stay up-to-date with the right resources and tools to help their clients, Erik said. “But it’s still us,” he emphasized. “We’ll still maintain the family-like culture here in this office. That’s all gonna stay.”

So, too, will Larry and Dennis. They’re no longer the owners, but they’ll still be agents, and they’ll still be available to mentor agents as they always have. “Neither one of them will ever truly retire,” Erik laughed. “I joke, but it’s probably not even a joke — I’ll probably retire before them! They just absolutely love it.”

Larry and Dennis wholeheartedly agree. It’s the people, they said, that make it such a fulfilling career. “I give all the credit in the world to Dennis,” Larry said. “He’s hands-on with the agents, and has really made it a fun place to go to work. We’ve always tried to make it fun, and Dennis is more accountable for that than I was.”

“You give me far too much credit,” Dennis chuckled. “But I’ll take it.”

For more information and to view current listings, visit livsothebysrealtyca.com, call (805) 646-7288, or stop in at the office at 727 W. Ojai Avenue.