Heading north on Highway 101 in Ventura, you will notice a road sign inviting you to join Highway 33 toward Ojai. Ojai is 13 miles east of Ventura and nestled under the mystical Topa Topa Mountains. Take that road and you’ll find yourself in quintessential small-town America. Tucked neatly inside the mountain range on what is historically Chumash territory, Ojai is a well-known artistic community. It is famed for the “Ojai Vortex” — a vortex where, apparently, all of your previous life experiences drain away and you discover the inner beauty of all things living and past. Yeah, that’s what I thought, too. Then I went there and discovered, much to my horror, that the Ojai Vortex exists.

That vortex most certainly exists in this tiny town’s musical offerings. Ojai has been (and is) home to so many famous actors, directors, and musicians that it makes the head spin. It isn’t uncommon to roll into a music night in one of the places noted here only to find Grammy Award winners playing to a couple of dozen local denizens and loving every minute of it.

A few years ago, I had a conversation with one such musician who is used to regularly playing in front of tens of thousands of adoring fans. This was after a gig at a local favorite, The Village Jester. There were probably 15 people in the place watching five world-class players perform for over two hours. I asked him if it was boring playing for a couple dozen people in a small bar. He said that playing small gigs was really scary because he could see “the whites of people’s eyes” and he knew when they weren’t engaged. But, also that he enjoyed those small gigs more than anything else because they made him feel alive, and reconnected him to his music.

When you arrive in Ojai, you will find a sedate, restrained little town that appears to roll up its sidewalks at 8 pm. At least, that’s the common misconception! Start talking to a few locals, however, and you will find a very different reality. Here are a few of our favorite Ojai Valley spots. 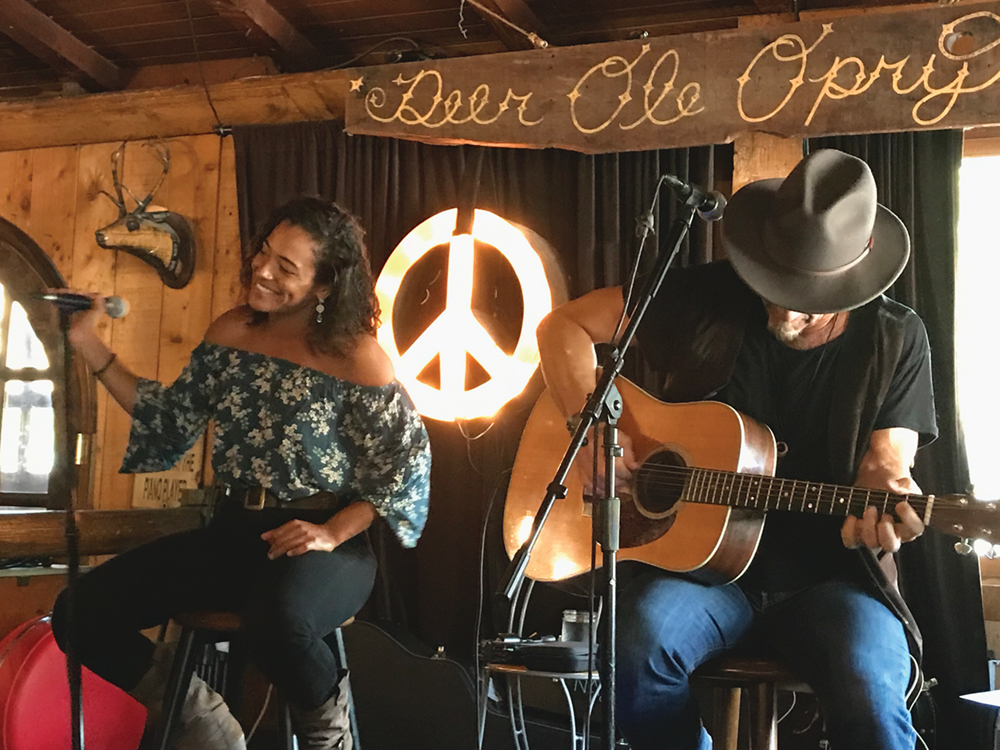 Amber and Smoke performing at the Deer Lodge.

Just outside of the Ojai city limits on Highway 33 is The World Famous Deer Lodge. Established in 1932, this longtime staple of Ojai nightlife is currently owned by the wonderful Ojai native Sophia Miles. After a few ups and downs in the recent past, Sophia has steadied the ship over the last three-and-a-half years, and has brought it back to its glory days. In order to create quality over quantity, she has limited the music to two or three nights each week. This allows her to direct her resources to take care of the musicians properly. Instituting a small cover charge was another way that she showed her care for the musicians (100 percent of that cover charge goes directly to them).

Walking into The Deer Lodge is akin to going back in time — a time when Ojai was a small farming community and hunting was probably the only entertainment to be had. The sturdy tables and chairs appear to have been rough-hewn that morning from the Los Padres National Forest just a couple miles up the road. And, then, there are the “trophies” on the walls. It may not be a place for a PETA fanatic, but for the rest of us, it gives an equal sense of history, fascination, and unease.

Parked in a corner of the bar is a raised stage where all sorts of bands take up residence. Sophia grew up near Ojai’s downtown Libbey Bowl and was lulled to sleep by whatever type of music was playing there. Wafting through her curtains would have been everything from Beethoven to punk to any number of famous bands. The music on offer at The Lodge, as the locals call it, reflects that upbringing. On Friday and Saturday nights, expect jazz, rock, punk, silent electronic dance parties, and singer-songwriters. A particularly good night is led by Simon Phillips, the drummer for Toto. Simon brings together a bevy of L.A. jazz musicians for the event as his schedule permits.

Check the Deer Lodge website for details on their offerings. And, while you’re there treat yourself to a tri-tip sandwich. Tell them Nigel sent you!

The family-owned Majestic Oak Vineyard Tasting Room is located down a flight of stairs below ground level, and offers great tastings of their own wine curated not five miles from the tasting room. Ojai locals for generations, the Gustafsons know what makes Ojai tick — and one of those things is music. If you happen by on any given Saturday and Sunday afternoon between 2 and 5 pm, you will probably be fortunate enough to listen to some of the best singer-songwriters north of Mexico. Now, for recruitment purposes, it certainly doesn’t hurt that family member Micah Gustafson is a top quality musician himself and has played in some top level bands over the years.

Majestic Oak is an intimate space and the music takes place on their beautiful outside patio, so it does not get the full electric treatment. But what you will get are very high-end musicians in ones, twos, and/or threes, playing for the sheer joy of playing, and being watched by other high-end musicians who are listening for the sheer joy of listening. Grab a glass, a bottle, and/or a full tasting flight; then, as the great Bryan Ferry put it “(be) in with the ‘in’ crowd. Know what the ‘in’ crowd knows.”

Topa Topa Brewing Co. is just a couple of doors down from Majestic Oak and is a relatively new addition to Ojai’s booming downtown. Co-founder and Ojai resident Jack Dyer is an indefatigable optimist. Never without a kind word to say or smile on his face, he is as genuine a person as one could ever hope to meet. Jack is all about community spirit and supporting the communities that support his business. That being the case, Topa Topa has a strong preference toward local artists. The music genre is less important than the individual local connection of the artist and the originality of the music. Cover bands are definitely not Topa Topa’s bag, although every artist will tend to slip a couple in. While not exactly promoting themselves as a music venue, given the depth of the local talent pool it is impossible not to blend Topa Topa’s “Good Vibes and Good Beer” motto with good music. Topa Topa tends to present music on Thursday nights and occasionally on Saturdays. Don’t worry about hearing the music; the place has garage style doors that swing wide open to the outside patio. There, you can eat some of the fabulous food from the Sama Sama restaurant counter nestled inside, while imbibing one of Topa Topa’s hand-crafted beers. I recently ate the mind-blowingly good baby-back ribs. Ribs to dream about, I kid you not. 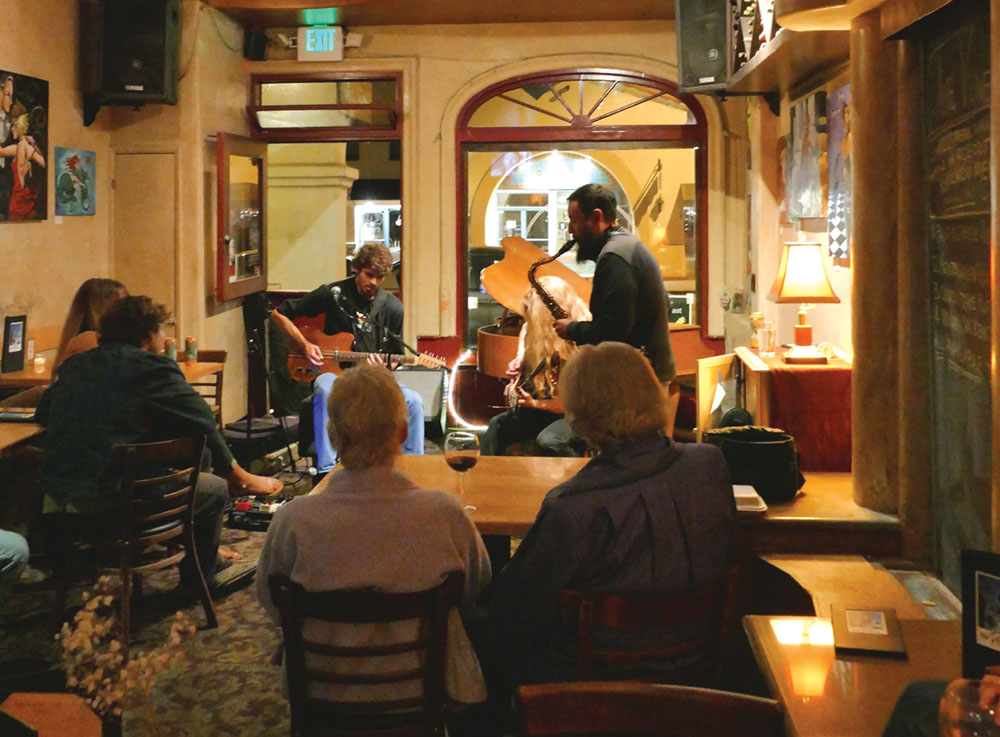 The Vine, Ruben Salinas of the Animals with the Rose Valley Thorns. (Photo by Dawn Rosa)

The Vine & Feros Ferio Winery took over from The Village Jester as one of the main music scenes in Ojai when a water main broke and devastated The Jester building five years ago. It is still being rebuilt. Full disclosure: the writer of this article is also the owner of both The Village Jester and the Vine & Feros Ferio Winery. But since we’re talking about live weekly music venues in Ojai, my editor said we’d be remiss not to include them.

The Vine is a restaurant, bar, and winery all rolled into one. But, what it’s really known for is the music that pours out of its doors and down Ojai Avenue every night except for Tuesday. Boasting a baby grand piano on its low stage, when you walk into this small place you’ll find more than 50 beers, ciders, and alcoholic Kombuchas, in addition to a full bar and its own wine label, Feros Ferio. The music offerings change every Friday and Saturday. The weekdays and Sunday night bring residencies for some amazing individuals/bands. However, locals know that Wednesday and Sunday nights are the sweetest of the sweet. On Wednesdays starting at 7:30 pm, you can expect to find the rocking yet soulful and heartfelt blues of the talented multi-instrumentalist, singer/songwriter T.D. Lind. He is often joined by Big Bad Voodoo Daddy’s Karl Hunter on saxophone, and watching them play together is a joy to behold.

Sundays at 7:30 pm, Danny McGaw and The 33 have built up an enthusiastic following for their five-piece band that features a cast of accomplished (and Grammy-honored) musicians. You’ll get nothing but originals that you’ll swear you’ve heard before — and will want to hear again.

So, Ojai! Not quite the bucolic little town you thought you were walking into. The best advice I can give you when you get into town: Ask a local!