The 101: Tracing the origins of California’s longest freeway

Traveling west out of Los Angeles on U.S. 101, there’s a point about eight miles beyond the Ventura County line where the landscape seems to open up and fall away: the top of the Conejo Grade, the section of highway connecting the Santa Monica Mountains with the Oxnard Plain. 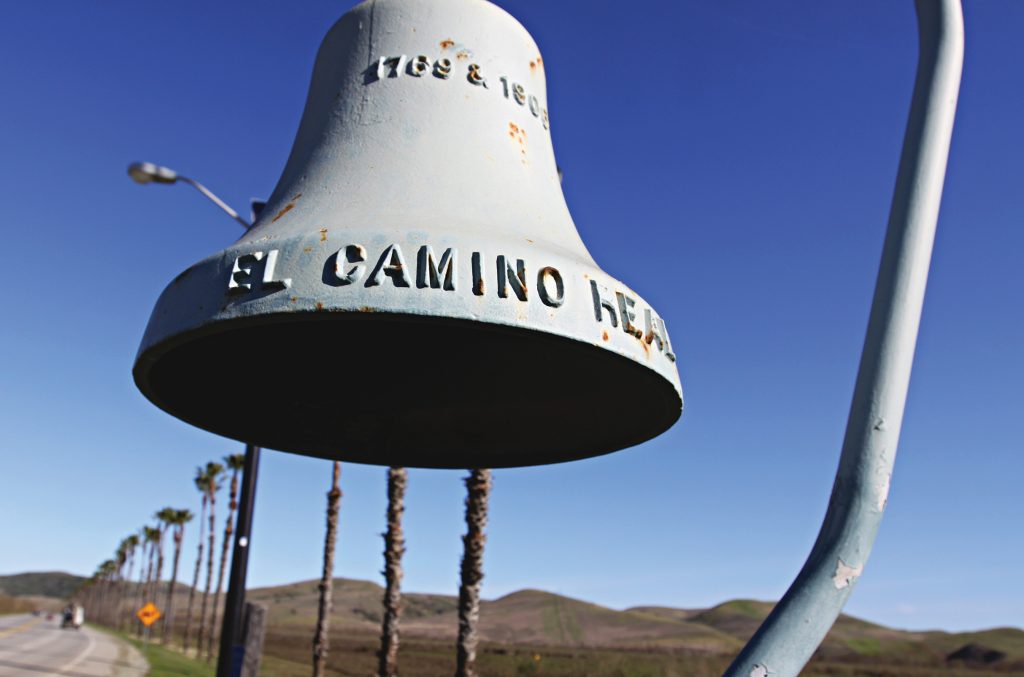 If you’re driving it on a clear night, you’ll see the lights of Camarillo some 700 feet below, with the lights of Oxnard and Ventura farther away. By day, you’ll see broad croplands extending toward the Pacific Ocean to the south and the Topa Topa Mountains off to the north.

Suddenly, the sky seems bigger than ever.

The full name of the road, to be accurate, is United States Route 101, a member of the family of United States Numbered Highways. It’s also known as the Ventura Freeway, Highway 101, or, in regional parlance, simply “the 101.” 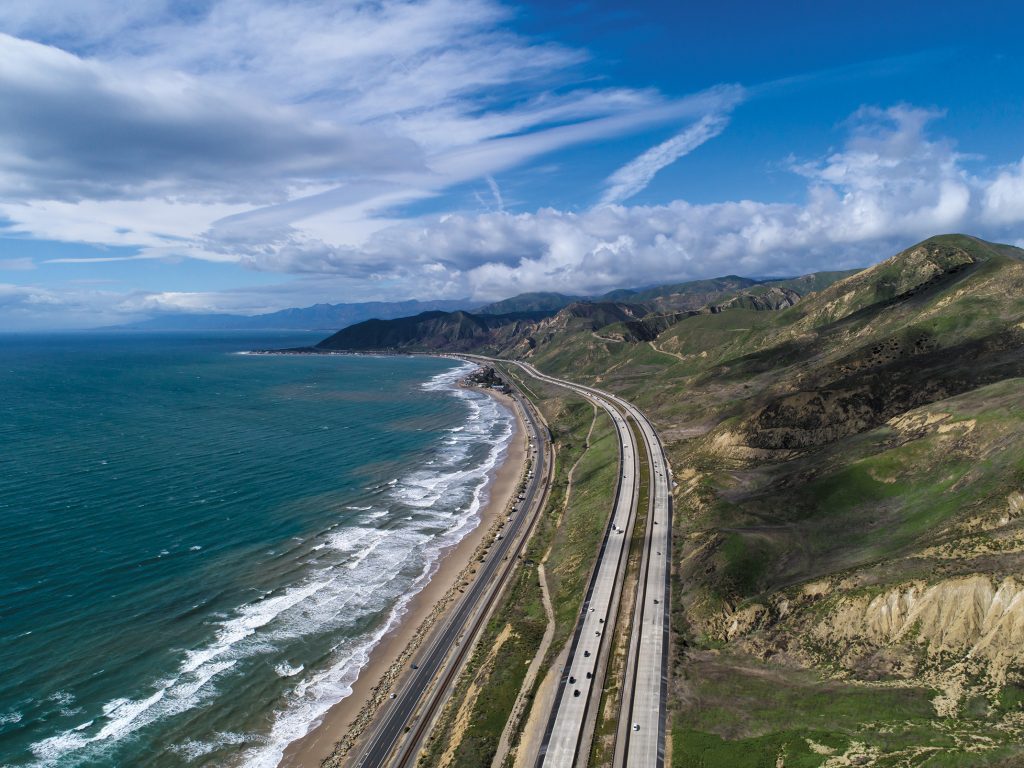 The 101 was officially designated such in 1926. Back then, its southern terminus was in San Diego, but the portion from there to Los Angeles was decommissioned in the early 1960s, when Interstate Highway 5 (or “the 5”) was nearing completion.

Today, the 101 sprouts out of the 5 somewhere down in a snarl of concrete spaghetti near the Boyle Heights neighborhood of Los Angeles. Three states — California, Oregon, and Washington — are traversed by 101 pavement, which runs near or along the coastline all the way. The northern terminus is just south of Olympia, Washington, where it dissolves unceremoniously back into the 5, the very same highway from which it sprang some 1,540 miles to the south. 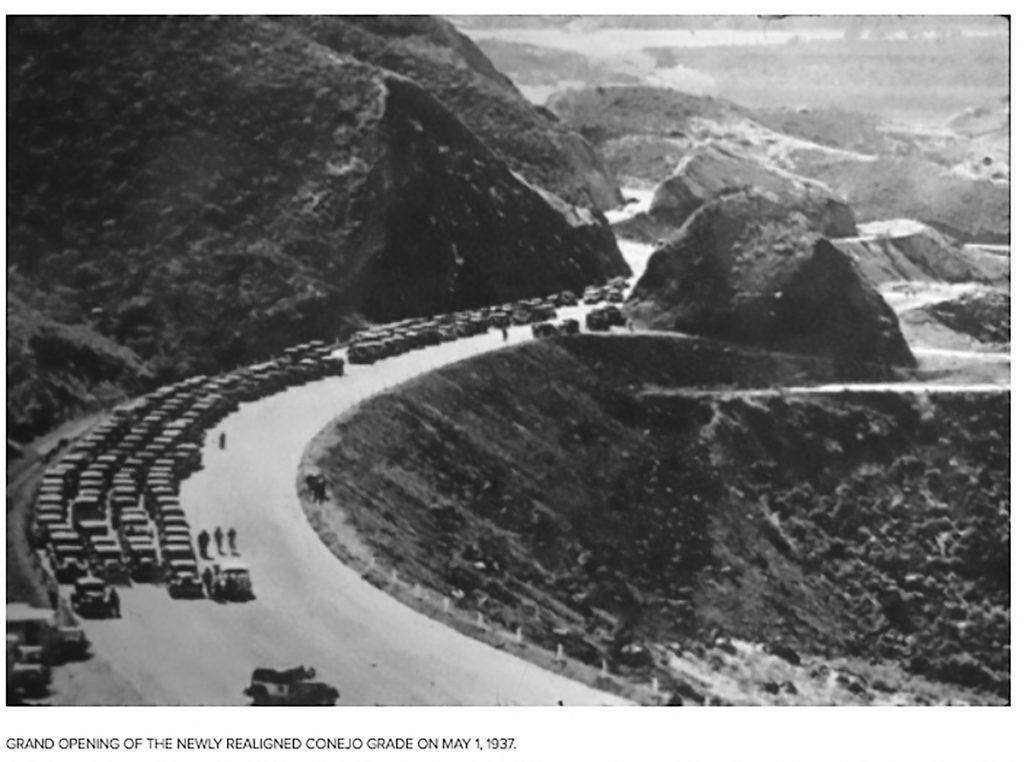 Though the 101 is not the longest of the U.S. highways, it is California’s longest, at about 808 miles from Los Angeles to the Oregon state line. And more than a few drivers would put it in the running for most scenic. From Washington through California, it takes in several climate zones including oceanic, or marine west coast, and several grades of Mediterranean. Chaparral and grasslands, rolling vineyards and redwood forests, rocky coves and solemn sea stacks lie along its way. The waters of alluring rivers pass under its bridges: the Russian, the Rogue, the Klamath, and the Eel, not to mention the estuary of the mighty Columbia. 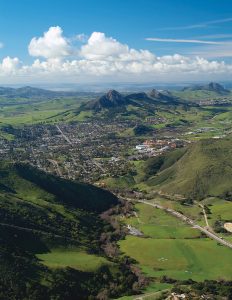 Jan and Dean performed a fun tribute to the road with their 1963 song, Surf Route 101. If surf music’s not your thing, try Herb Alpert’s breezy pop instrumental, Route 101. The 101’s most memorable account, however, might well be a 1955 hit, Black Denim Trousers, and Motorcycle Boots, by The Cheers, which included the refrain:

El Camino Real There is yet another name for U.S. Route 101, and you’ll find it applied to the main road as well as adjacent thoroughfares all the way from the Mexican border to up past San Francisco: El Camino Real. This was the route, the network of trails, connecting Spain’s earliest efforts at colonizing what we know today as the State of California.

Although Spain had established missionary settlements in Baja California as early as 1697, it would be another 70 years or so before it showed much interest in the northern territories — the so-called Alta California.

Most of the missions were separated by distances of about 30 miles, or a day’s ride, the population at each consisting mainly of the clergy, soldiers, and converts from the indigenous peoples of the region. Ultimately, this effort at colonization would entail 21 such missions from San Diego up to Sonoma, all strung along 600 miles of trails known as El Camino Real.

No one today is certain exactly where the old El Camino Real might have run. “I’ve tried to identify the original route,” said Matthew Roth, historian, and archivist with the Automobile Club of Southern California, “and it’s just freakin’ impossible.”

So scant is the textual evidence for California’s El Camino Real, Roth said, it’s unlikely to have amounted to much more than a loose arrangement of trails and footpaths between the missions. And when it came to moving heavy cargoes or otherwise expediting transit up and down the coast, he added, water was by far the more efficient way to go. 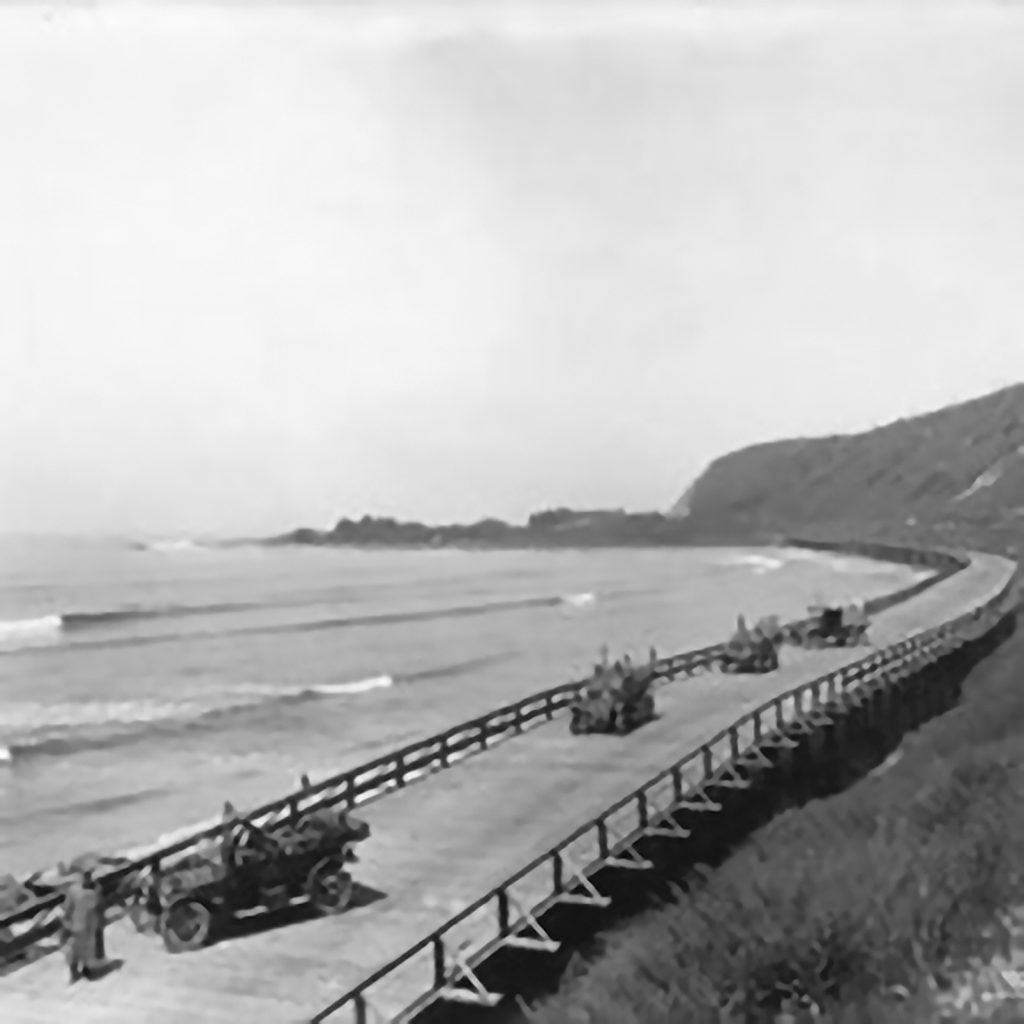 1914 – The 101 Highway between La Conchita and County Line. The wooden road was called the “causeway.”

The whole idea of El Camino Real was probably made up in the early 20th century, in Roth’s view, figuring as an attractive outgrowth of the Mission Revival movement in architecture and design. It was part of a push in the economic development of Southern California to encourage people to move there, Roth added. “It was a way to Anglicize the memory of California.”

Still, there can be no doubt of some sort of infrastructure connecting the missions, a likelihood that continues to intrigue the curiosity. Historian Max Kurillo, in his 2000 study, California’s El Camino Real and Its Historic Bells, characterizes this infrastructure as primarily a military road, essentially the route followed by the colonizers Gaspar de Portolà and Juan de Anza.

This view is echoed by John Kolstad, owner of the California Bell Co. “There was always some kind of roadway connecting one mission with the next,” he said, “but it was not generally used by the public.” The public in those days, he added, would be the indigenous peoples, for whom the use of El Camino Real was unlikely to have been allowed. The Padres wanted to keep their newly acquired flocks close to the missions, Kolstad said, so it would mainly have been soldiers who used the roads.

And the connecting trails and roadways were bound to have been ephemeral, too, Kolstad said. “Many would change with the weather,” he said, “with washouts and mudslides, as (common) then as they are today.” He points to present-day Refugio Road (Forest Route 5N12, through Aguajito Canyon) as an example. It began as an alternate route whenever Gaviota Pass happened to flood.

In 1959, the California State Legislature recognized a network of state and federal highways, including parts of the 101, as a commemorative thoroughfare. From Los Angeles to Sonoma, the California Department of Transportation maintains decorative mission bells along the 101 and portions of two state highways.

When you’re rolling down the 101 in Ventura and Santa Barbara counties, you’re probably pretty close to whatever the old trail might have been in the early days. This would seem likely particularly between Ventura and Carpinteria, where historically there were only two ways to go: along the coast by way of Rincon Cove, or over the mountains through Casitas Pass. Either way, the road space is rendered narrow by landform. Traversing Rincon, in fact, had to be done during periods of low tide, so confined to sea level was the original road.

Whatever El Camino Real’s precise route might have been, it was probably there long before the expedition by Portolà, who must have followed existing trails to make his way north. Across the three counties, much of today’s transportation infrastructure developed along trails and byways laid down by the earliest inhabitants, said Julie Tumamait-Stenslie, a tribal elder of the Barbareño/Ventureño Band of the Chumash. “These old highways and roads into the hills were Chumash routes,” she said. “It was a network.”

The Bells of the 101  The bells you see along the 101 have been around, in one form or another, for more than 100 years. The diminutive replicas of a mission bell were first put in place in 1906 to commemorate El Camino Real.

Spaced one or two miles apart along either side of the highway, the bells are suspended from 17-foot metal staffs designed to resemble shepherd’s crooks. Each bell is cast from iron and weighs about 85 pounds.

Early in the 20th century, author/artist Mrs. A.S.C. Forbes created the design for the bells, based on drawings she did in the belfries of the missions. She was also a bell maker — reportedly the only female bell maker in the country — with her very own foundry in Los Angeles. Her California Bell Co. cast not only the initial run but also continued making replacement bells until 1948, when the company was sold. In 1960, its then-owner suspended all operations, locking its entire inventory into a three-car garage in Los Angeles.

For the next 40 years or so, the bells were replaced as needed with models designed and cast by another bell maker, Justin Kramer. In 2000, the aforementioned Saratoga businessman John Kolstad was shopping for a mission bell to hang in his backyard and wound up purchasing the entire inventory of the old California Bell Co.

That inventory included the foundry equipment. Later that year, Kolstad approached Caltrans, and by 2010, the El Camino Real had been refurbished with 585 new iron bells, all cast in the original 1906 molds.

Today, the southernmost bells of the 101 begin just west of the Los Angeles River, continuing north all the way into Marin County. At Novato, the bells branch off to the northeast, following State Route 37 into Sonoma County, and then along State Routes 121 and 12 into the town of Sonoma. The northernmost bell is in front of the historic Mission San Francisco Solano in Sonoma.

But commemorative mission bells are by no means relegated to the 101’s representation of El Camino Real — you pretty much find them all over the place. They’re still in evidence along the decommissioned segments of old 101 south of Los Angeles, Kolstad said. Numerous communities up the road above Los Angeles still have one or two hanging around on their main streets, holdovers from the time when the 101 ran right through towns, rather than around them.

Beginning in 1906, the mission bell caught on throughout California as a kind of state icon, decorating parks, courthouses, and downtown intersections. There’s one in front of Ventura City Hall, for example. And cities still incorporate them into the urban decor. When the town of La Habra began a recent downtown renewal project, it ordered 15 mission bells, Kolstad said, while Escondido put in 13 bells in 2006.

To be sure, the mission bell means different things to different people. To Mrs. Forbes, the mission bell was a symbol of the iron will of colonist Junípero Serra. For Kolstad, the Caltrans bells commemorate California transportation history. Matthew Roth, the historian with the Automobile Club of Southern California, sees them as roadside extensions of the Mission Revival movement of the early 20th century. And for students at the University of California, Santa Cruz, who is 2018 petitioned the school to remove one from the campus, mission bells represent colonial oppression and genocide.

All of which perhaps goes to say that the mission bell is a truly robust symbol, an image offering appreciations of California heritage, and that of Highway 101 history, on many levels.