A few miles east off Highway 101, lies the Township of Santa Ynez. Established in 1882 along an old stagecoach route, Santa Ynez’s current population is under 5,000 people. It was first established as a “service” town and was referred to as the “new town” where services such as a blacksmith shop, mercantile and grocery stores, a barber shop, and a drug store sprang up to supply services to the farmers and new settlers of the day. 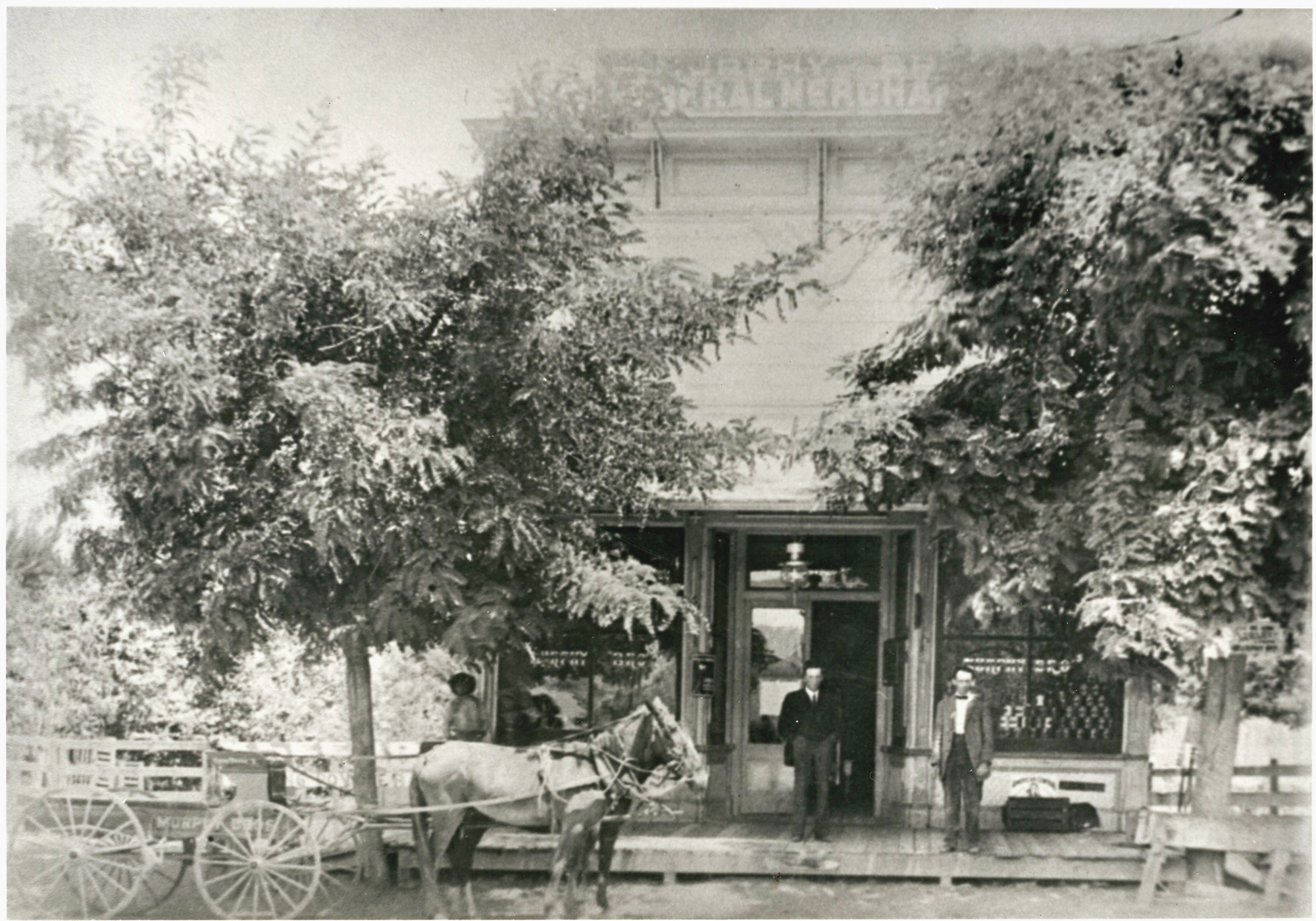 followed the founding of Mission Santa Inés in September 1804, the 19th of the 21 Missions in California. The Chumash Indians were the first to populate the area and bore witness to the changes to come. The Chumash people once numbered in the tens of thousands and lived along the California coast with territory spanning from Malibu to Paso Robles. Calling themselves the “first people” and the Pacific Ocean their first home, they enjoyed the rich resources of both land and sea, and a more prosperous environment than other Native American tribes. Wheels were set in motion for growth with the establishment of the Mission in the area. The Mission Santa Inés could be considered the first “industrial site” as a grist and fulling mill were built; a grist mill to grind wheat grown at the Mission, and a fulling mill to provide a means of softening sheep’s wool by pounding it with a large wooden wheel to make better and softer woven goods.

Both mills drew from the abundant water flow from the Alamo Pintado River to power the hand-built mills. Both mills currently stand today and are under the care of the Santa Barbara Trust for Historic Preservation. You can take a tour of the Old Mission Santa Ines from 9-4:30 seven days a week, excluding holidays. Call two weeks ahead if you would prefer a docent led tour. 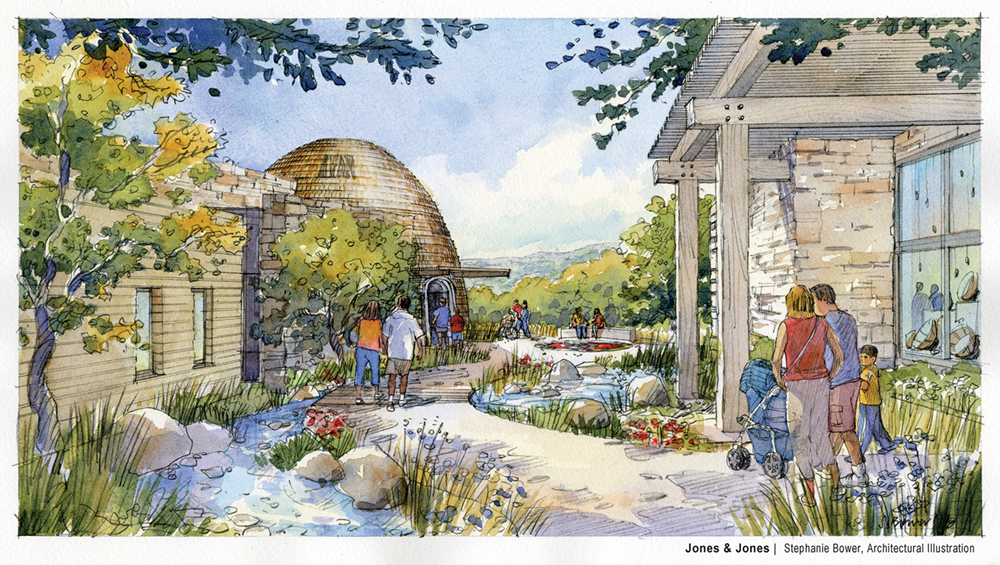 The Santa Ynez Township was originally to be built around the Mission, but that never materialized. Instead, Santa Ynez was the second town (first was Ballard in 1881 which served as a stagecoach station), to be formed in the link of five small towns in the area. 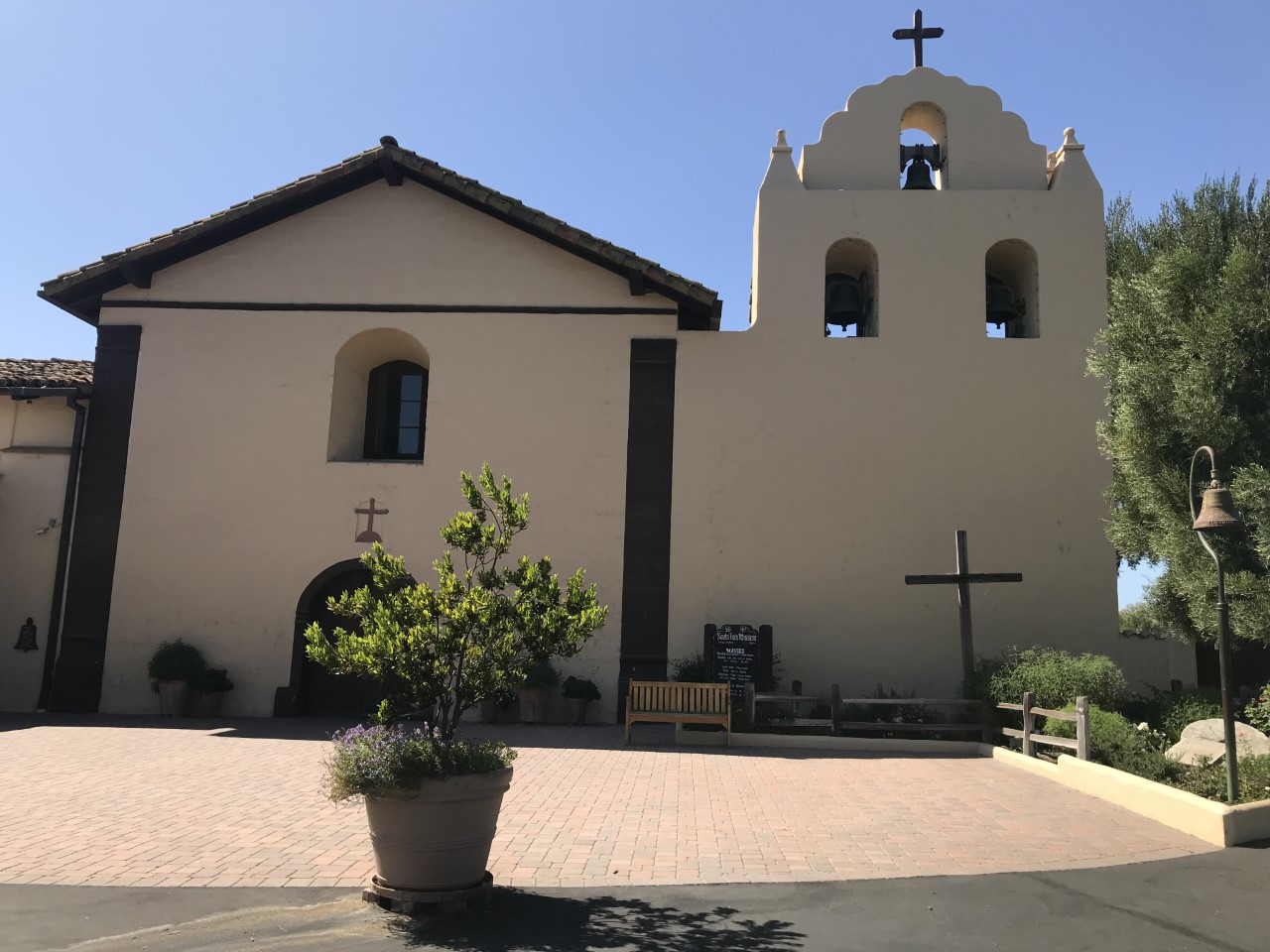 The new settlement in Santa Ynez was initially to be named “Sagunto” after Sagunto, Spain, the hometown of Catholic Bishop Francis Mora. Bishop Mora had received Congressional approval and authorized the sale of parcels of land known as the College Ranch. The College Ranch land had been granted to the Catholic Church by the Mexican government in 1843, and Bishop Mora wanted to encourage and incentivize the early settlers to form a township rather than live the outer reaches or “far-flung” land holdings. He wanted to see a community develop in Santa Ynez, so he offered a free parcel in the town site with each additional $15 parcel purchased (at the time, the cost of a one-acre parcel was between $6 – $15). The name Santa Ynez was ultimately chosen and “anglicized” from Inés to Ynez, naming the town, most likely, after the Mission Santa Inés.

The stagecoach passed through the valley in 1858 from San Francisco to Yuma, Arizona until 1901, although there are reports that one of the last stagecoach runs through California did pass through the Santa Ynez Valley in 1914. The narrow-gauge railroad also has history in the surrounding area, bringing passengers and supplies which made travel and freight much faster and easier thus ending the stagecoach era. Visitors would travel the narrow-gauge to the valley and were then transported via stagecoach over the San Marcos Pass to Santa Barbara, connecting them south. Some of the passengers the narrow-gauge railroad brought to the area were searching for property and a place to settle down. When the decision was made to expand rail services along the coast instead of through the Santa Ynez Valley, the landscape for growth changed, keeping the towns smaller than had once been anticipated and ultimately brought the stagecoach era to an end. 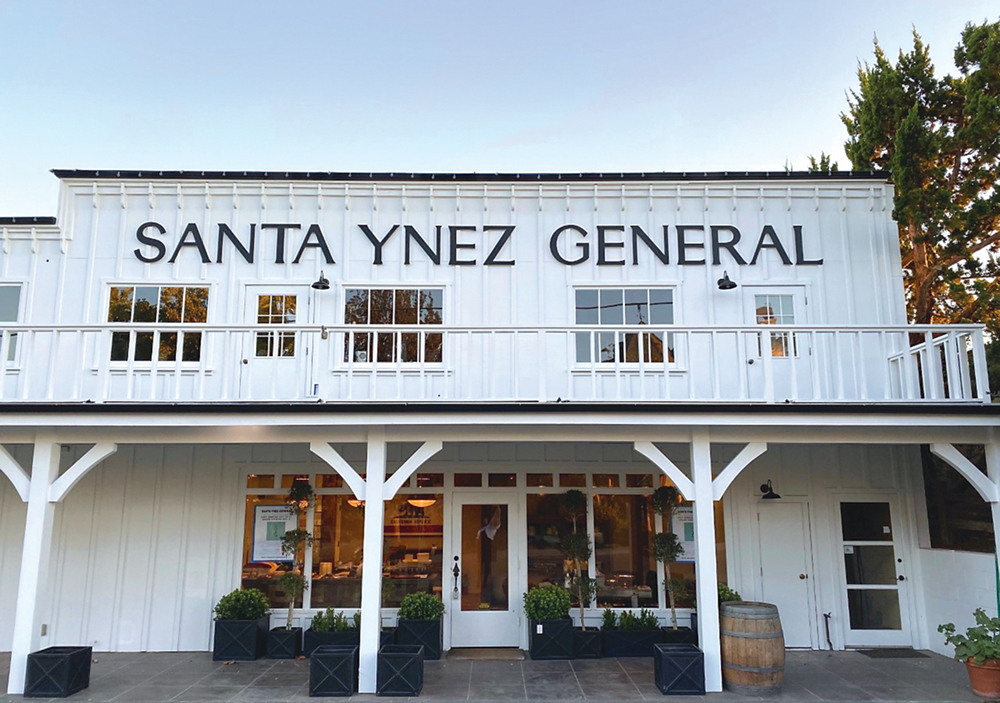 You can still see the remnants of a western town when you walk through Santa Ynez. Western storefronts, and an easy, country lifestyle is apparent both in outward appearance and inside the shops and restaurants. It is that warm, friendly, come-on-in kind of welcome that speaks to the small, yet savvy, business owners in the Township of Santa Ynez. WiFi is available around town and most shops have an active social media presence.

Harrison Hardware and the Santa Ynez Feed and Milling serve as “anchor stores” for valley residents and can take care of just about any need for your pets and livestock, ranch or garden. The Santa Ynez Pet Hospital in town has provided small animal medical, surgical, dental, and emergency services since 1983. 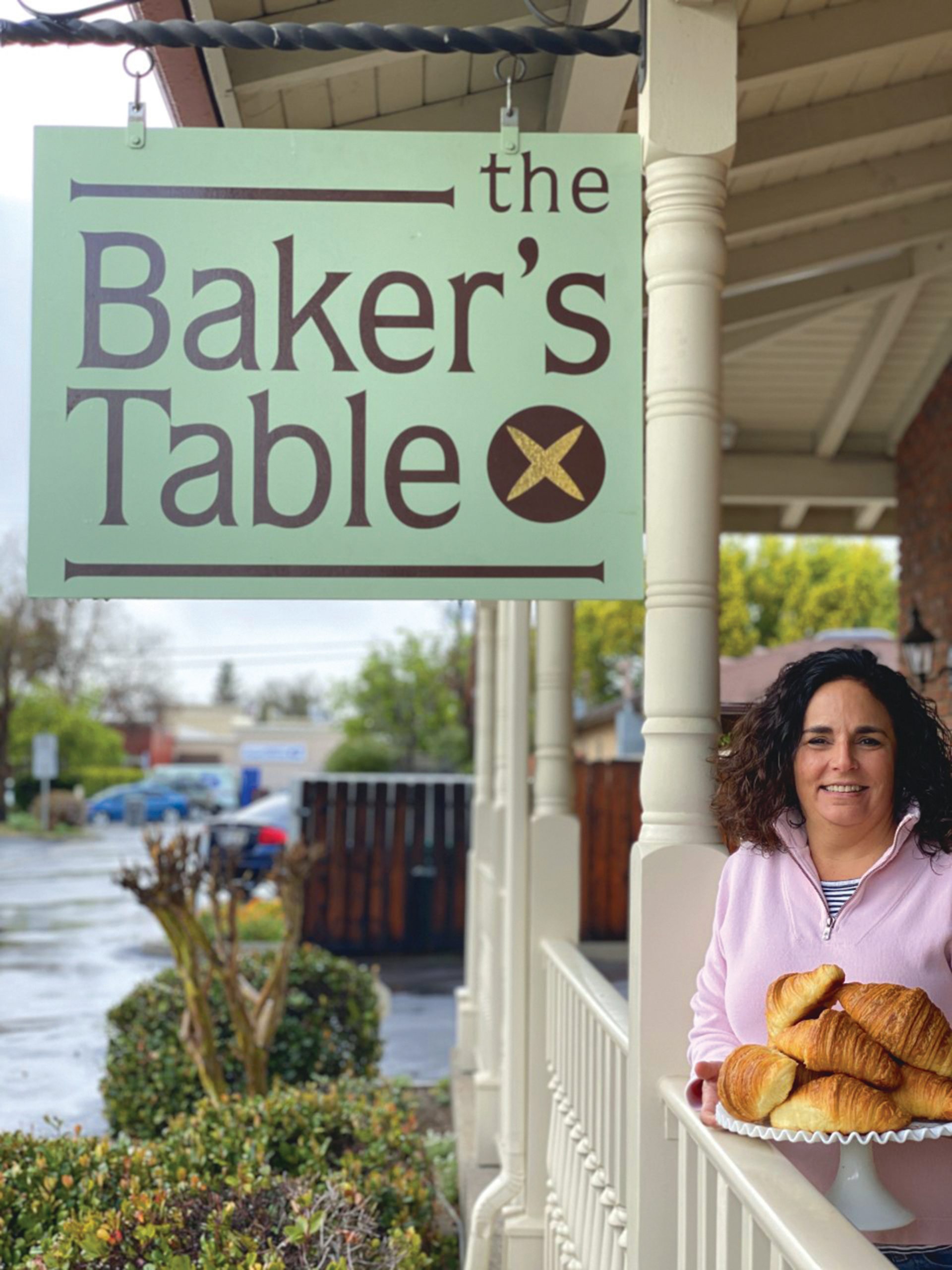 If you are lucky enough to have a little time to wander, come take a walk around. Start your morning at Pony Espresso, named with a definite nod to the western heritage of Santa Ynez. They open at 6:30 and offer a variety of coffee choices including, you guessed it, espresso! Baker’s Table, the Longhorn Café, and Lucky Hen Larder also offer delicious morning fare as well as complete lunch menus.

While you stroll, take note of the horseshoes embedded in the crosswalk that connects Edison to Sagunto Street. This was a result of a small-community effort to enhance the downtown area with the spirit of the west. You might be lucky enough to see horseback riders on the streets or horses tied up outside one of the shops or restaurants. Don’t be surprised, just know you’re in one of those special places when you’re in Santa Ynez! Check out the Maverick Saloon where Sagunto Street meets Meadowvale for a cowboy-inspired western bar and restaurant (visit their website for concert listings and special events). Mosey on over to the Santa Ynez Mercantile on Meadowvale while you’re there, it’s the closest thing you will find to a shopping mall in this country town. It offers a cheese purveyor case at the Lucky Hen Larder with sandwiches, salads, and charcuterie platters. An upscale home consignment store at Home Design and Consign is in the center along with Wild Poppy Boutique. Forage Florals offers floral workshops in their studio. The Santa Ynez Elks Lodge #2640 also has a place in the Mercantile and is open 7 days a week from 2 pm weekdays and 1 pm on weekends. 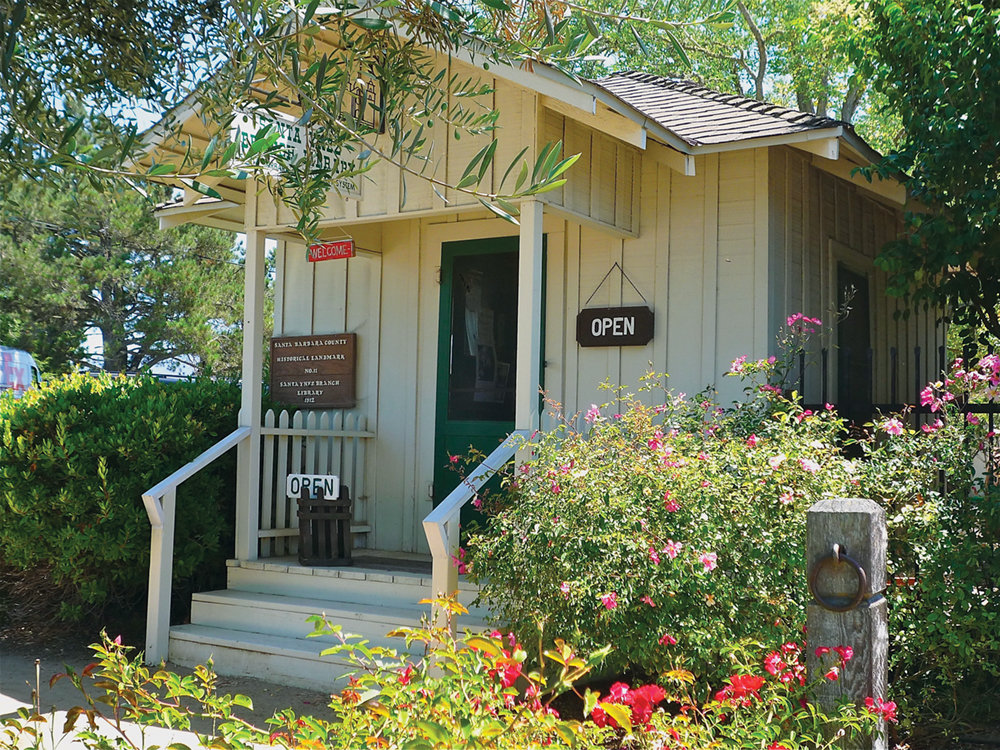 From the beginning, Santa Ynez has offered services and supplies to the local townspeople and passersby.  Now, 138 years later, artisans and entrepreneurs in style, fashion, food and drink along with accountants, wealth advisors, and attorneys all make up the town today.

Please visit our website at santaynezchamber.org for links to our members, place online orders or call ahead for current hours and availability.