Taught by her dad, Samantha Huston is making her mark on the Central Coast equestrian community

Whether you’re a rider or not, it’s easy to imagine that a horse’s entire body moves anytime a part of it moves. Picture the shoulder moving forward and back, muscles along the spine shifting as the horse walks, trots, or lopes. The body curves and bends as the horse covers ground, especially on the trail with elevation changes, hills to climb, and canyons to descend. 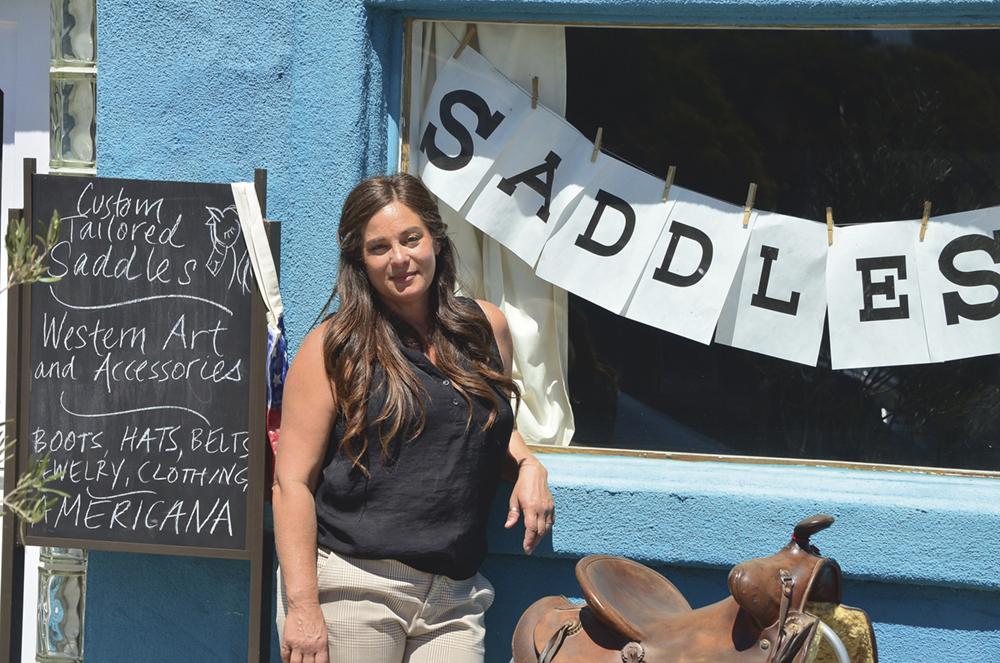 Samantha at her shop

Now imagine a saddle on the horse’s back. Most saddles are made with a rigid frame called a tree, which were (not surprisingly) traditionally made out of wood. In more recent decades, the wood was wrapped in fiberglass. Some trees today are made of other materials, including synthetics like polyethylene. 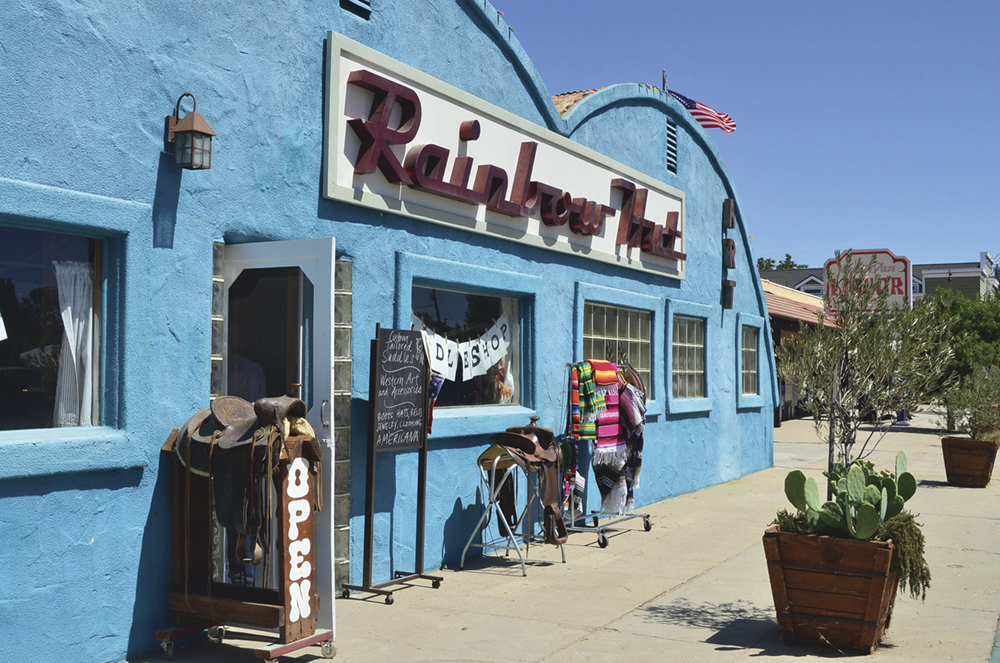 One thing they all had in common was that they were rigid. Unmoving. Odd, for an animal always on the move. Central Coast saddle maker William “Bill” Huston found a better way. His answer to the unmoving tree — and horses with sore backs — was a treeless form that was sculpted out of a new material which moved with horse and rider. Since 1962, his treeless form has been copied by other saddle makers, but the unique structure of his method cannot be replicated. 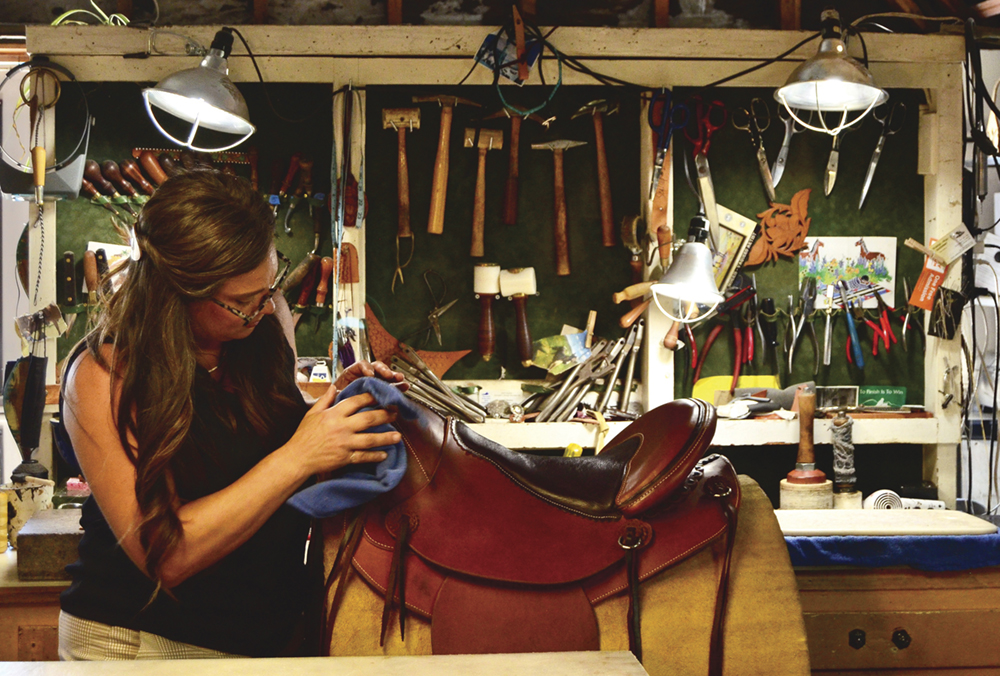 Samantha puts the finishing touches on a saddle in her shop.

With this design, “You’re riding the horse, not the saddle,” said Samantha Huston, Bill’s daughter. She has taken up saddle making in the style and design created by her father.

The rider’s goal is to focus on the horse itself. So, the saddle should function in a way that builds connection, bringing horse and rider closer. “It’s you, the horse, and the saddle moving and working together,” she said. Huston’s treeless design allows the movement between horse and rider to be “fluid” as the single-cell foam structure moves and gives, to both horse and rider. Bill’s design lives on through Samantha, who has put her own mark on it, in her shop in Santa Margarita.

Growing Up In A Saddle Shop

Samantha holds a photo of her dad, Bill, who taught her the art of saddle making

Samantha has horses in her blood and bones. She grew up riding 10 miles to school in Parkfield. But it wasn’t until she turned 40 and went to visit her dad that she started thinking of saddle making as a profession. While there, she made a few saddles with him, soaking up everything he had to teach her.

“I videoed, I took notes,” Samantha said. Her dad told her she would have to make five saddles before she’d be able to make one without having to refer to the notes. But it took a little longer than that. “Finally, after 30 saddles I stopped referring [to the notes],” she said. “Can you imagine? This is not something you learn just anywhere, except from your dad. It’s his brainchild. Saddles were never made like this, never. We’re not taking a wooden tree and nailing leather to it. We are sculpting every single part. You use every skill. All the sewing that you know. All the drafting that you know, all the construction. It’s super, super challenging.”

Now that Samantha was making saddles, she had to find a way to put her own mark on them. Her father is a leatherworker and silversmith and would add beautiful embellishments to his saddles. He would tool intricate rows of acorns or wild roses into the leather. Samantha doesn’t do that, but the artistry and craft of the saddles is apparent.

“My heart and soul is in the saddle fit,” she said. “All these angles. Dad taught me about saddle fit and rider fit.” Her father is still living, and they talk frequently about her work.

She points to one part of a completed saddle she had made for a beloved local rider, Lora Wereb. Lora, who completed the challenging 100-mile, 24-hour Tevis Cup ride in the midst of a battle with cancer, passed away last year. The saddle stands in tribute to Wereb in Samantha’s shop.

“This spot is the hardest,” to construct, said Samantha, “where everything comes together.” It’s a spot at the rear of the seat, where several seams and pieces of leather have to connect and form a point. The lines of the foundation underneath and the leather on the surface all curve and join together artfully at that joint in the saddle.

Initially, Samantha’s saddles were essentially copies of the first saddle she’d made for her horse, Ocho, whose back became the model for the sculpted stand she and her father made together. The stand is covered in a deep, mustard-colored suede with metal rivets, and has been formed into the shape of a horse’s back. “I made this with my dad,” she said of the treasured stand. 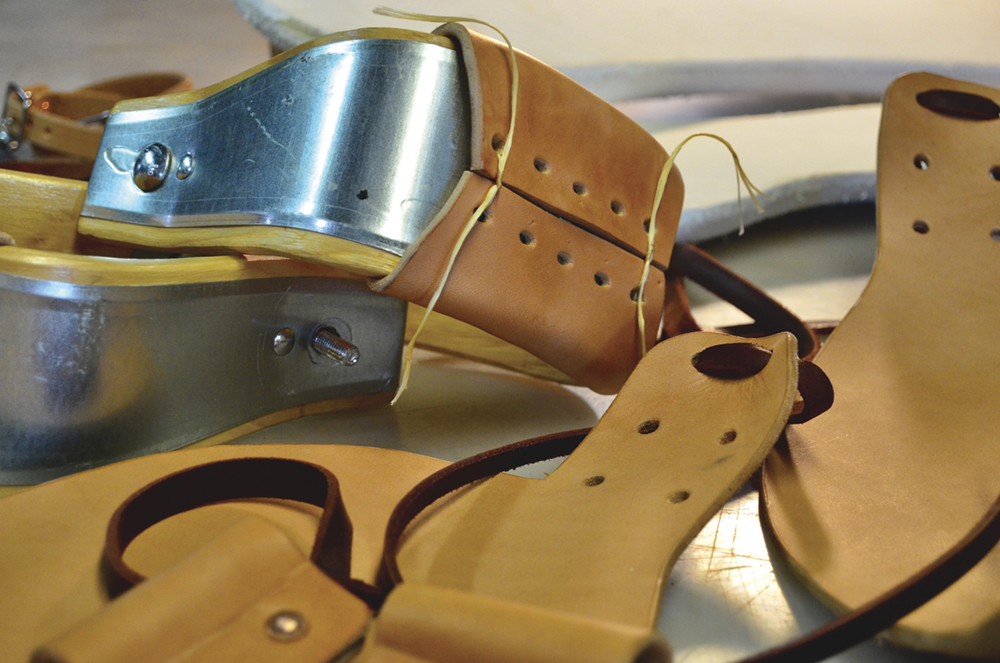 Each part of the saddle is sculpted, including the pommel and horn.

Ocho’s saddle also fit her other two horses at the time. It actually worked for a wide range of horses. “But then, as you get into the wider horses, (called) Gypsy Vanners,” the saddle has to adapt, Samantha explained. “It’s all about the saddle fit.” She began to custom-sculpt the saddles to fit each individual horse and rider, and how they fit together. 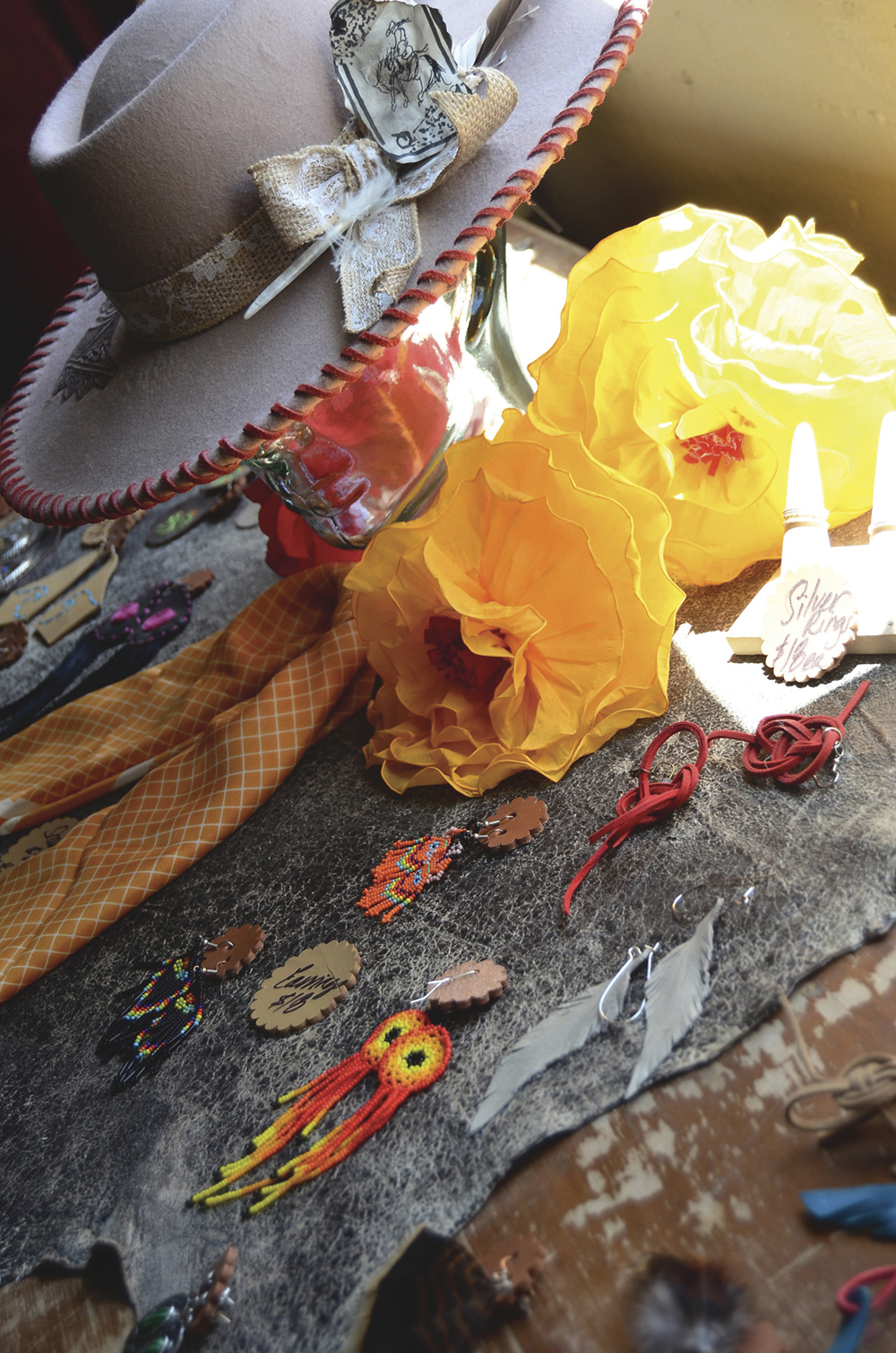 The shape of the saddle from front to back consists of different angles and slopes. Alterations to those angles are made depending on the horse and are based on a knowledge of how a horse moves. Samantha likes to work with local clients, from Monterey County to Los Angeles County. That way, she can see the horse in the flesh, allow the rider to test the saddle during the construction process, and make any adjustments as needed.

“Santa Margarita is a very horse-friendly place,” Samantha said. “We’re across from the feed store. There’s a large dirt lot next door where we’ve done fittings.” But when that’s not possible, the rider can make a cast of the horse’s back that Samantha then uses to sculpt the saddle.

Samantha, as her father before her, only sources leather from the American company Herman Oak Leather Co., based in St. Louis, Missouri since 1881. The company still sources all its leather from U.S.-raised steers and uses vegetable-based tanning compounds. Samantha showed me a palette of available colors: standard browns, blacks, and elegant palomino colors are included with greens, blues, and even pinks. 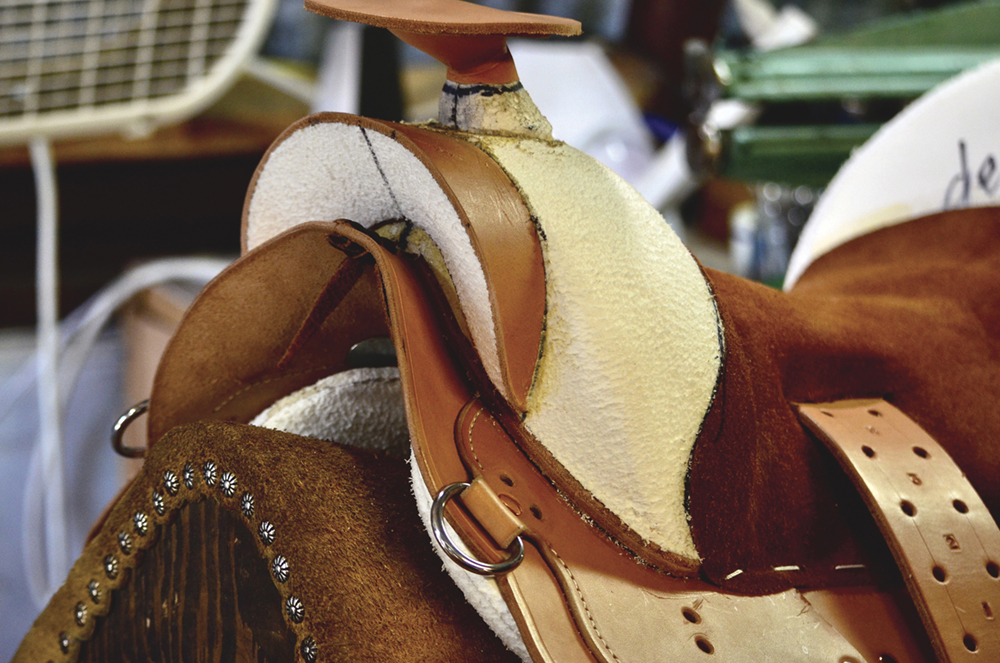 It’s not just the leather that is sourced from a company woven into the core of American saddle makers. She acquired her tools from Bob Madsen, in Carmel Valley. “His shop was in The Farm Center,” she said. “I just happened to come along.” At the time, she was working at a leather company in the area. “Then I met Bob Madsen. It was meant to be.”

Samantha pointed to a workbench, with a board for hanging tools on. “This bench (Madsen) inherited from Bob Hall in King City, an old-time leather worker and silversmith. People in the local Western community know Bob Hall for his amazing silversmith work with bits, spurs.

“I got all the hardware, snaps, rivets and buckles, and glue, thread and dye,” Samantha went on. “A man’s life collection of tools. A whole life. The tools go back several generations. I don’t have anything new. I was so blessed, given a whole saddle shop.”

She did have to pay for the tools, benches, and supplies, but she says it was an inexpensive price, and meant to be. 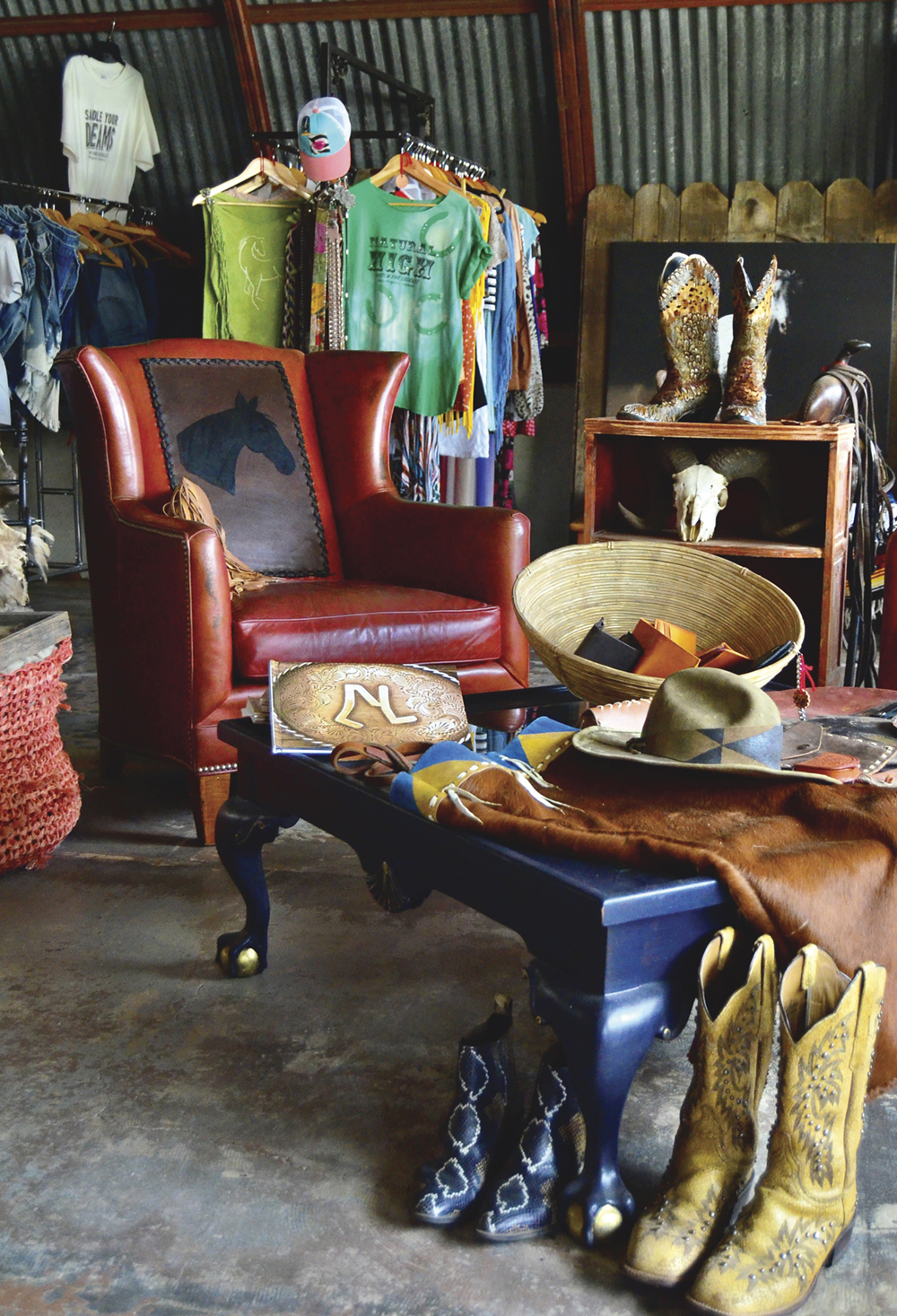 More than a saddle shop, the Rainbow Hut also offers a variety of Western-inspired clothing, accessories, art and housewares

For those aging riders who will never stop riding, many clients are coming to Samantha for a saddle that is both comfortable and lightweight. At just 12 pounds, the saddles are a far cry from the typical 40 pounds or more of regular western saddles. “Saddles gotta get lighter and things get easier. Really, it’s like a luxury saddle. Easy to deal with, not a big clunky thing,” she said. “I get a lot of orders due to injuries, or just aging, or they are total fanatics about saddle fit.”

Samantha said her saddles are for pleasure riding. “You wouldn’t dally from them,” she said, referring to a rider working cattle and looping the lasso around the horn of the saddle to cause tension in the rope when a steer has been caught. Her saddles are ideal for western equitation, cowboy dressage, trail riding, and endurance.

One of the six saddles in the queue that Samantha is working on right now will have a pink seat for a “heart conscious” nurse and will bear the name Braveheart. Yes, every one of her saddles gets a name. Her own saddle is named Dancer.

“I love to dance, dance in the saddle,” Samantha mused. “Riding feels like dancing, running down the trail with your horse, those good vibes.”

One saddle will be forest green for a client from Griffith Park and will be named Hello There, in a reference to a line from Star Wars. Another, for a client in Nebraska, will be named Perseverance, and will have a palomino-colored seat. “She has some of my dad’s saddles, now she wants one of mine,” Samantha said.

A turquoise Quonset hut might seem like an odd structure for a saddle shop and western boutique. And it is.

“I feel really honored to be in this building. It’s a town attraction,” Samantha said. Prior to the pandemic, she had just a small slice of the building down the western side. But the other two businesses closed, and she made a deal with the owner. Now she has the entire space and is working with local designers and artists to fill it with Western art, gifts, and other items. From buffalo hides, skulls, and boots, to fine art, leather chairs, and jewelry, the Rainbow Hut shop has a special Western style. 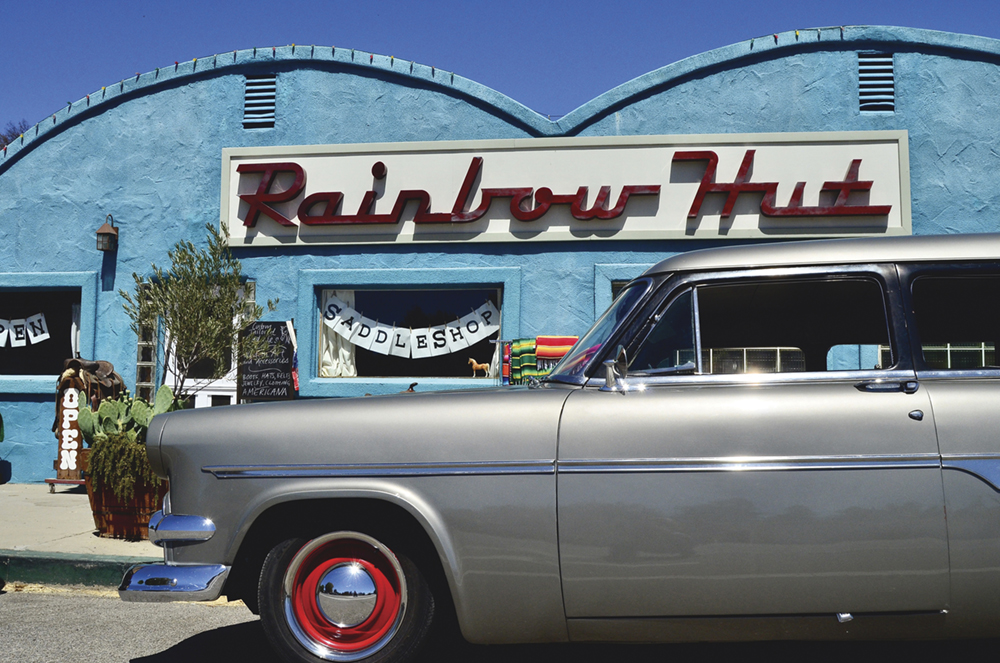 “Growing up in a saddle shop was the best part of  my childhood,” Samantha said. “The shop is super horsey, artsy. I really did want a cool saddle shop.”