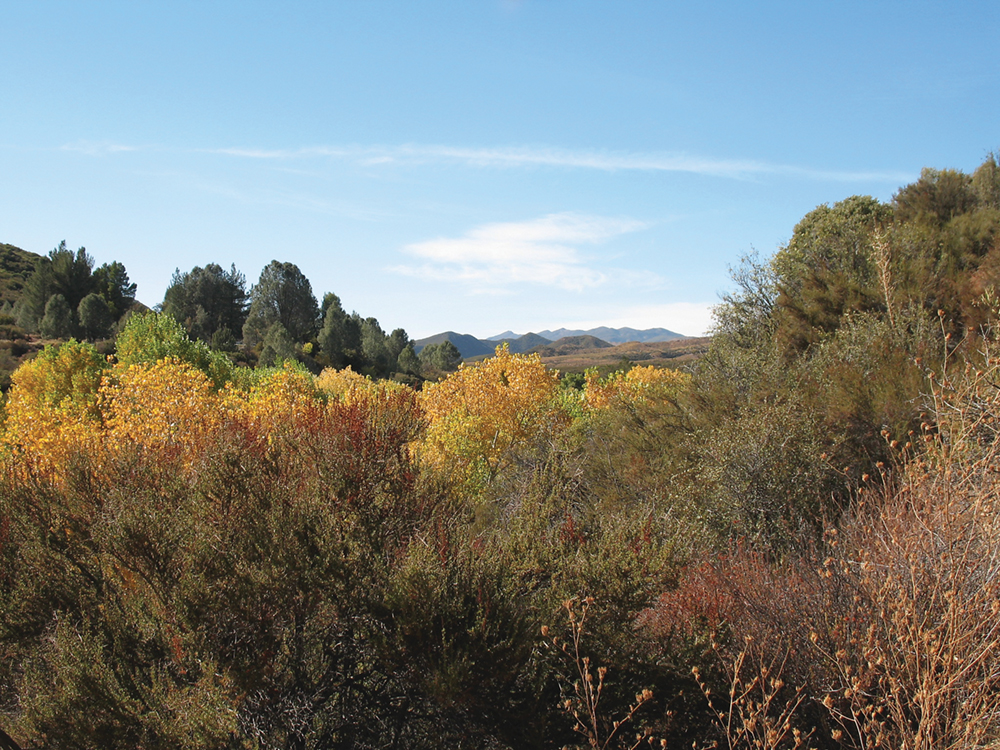 To be sure, the total extent of SR-33 is about 300 miles. Its southern terminus is at U.S. Highway 101 in the city of San Buenaventura, better known as Ventura. Its northern end is just outside the community of Tracy. In between, it crosses Southern California’s rugged Transverse Ranges, and then runs pretty much the length of the San Joaquin Valley. You could easily travel the whole route in one day if you were so inclined. 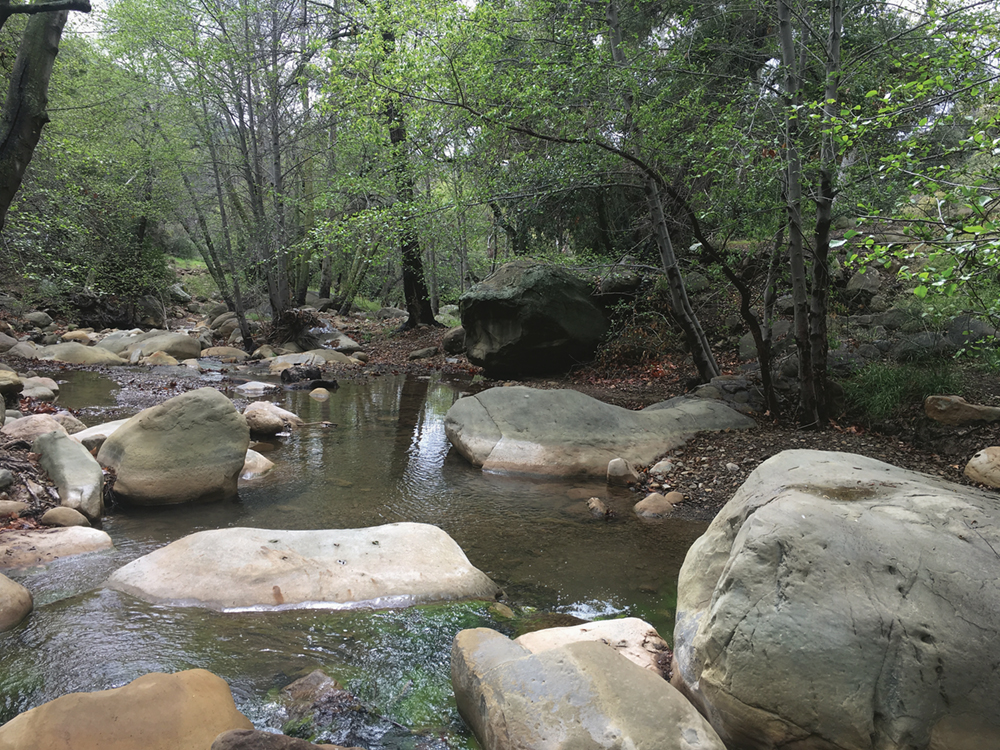 For a shorter outing though, the mountainous drive up SR-33 to the Ventura County backcountry is hard to beat. You can plan it for a quick look-around of several hours, or several days, because there’s plenty of things out there to see or do.

If you’re traveling either direction on the 101, take the exit reading “33 North” in Ventura. That’ll put you onto the Ojai Freeway, which is how the 33 is known at its southern end. It’s along here, if you look far ahead, that you’ll get some first impressions of the wild country to come. 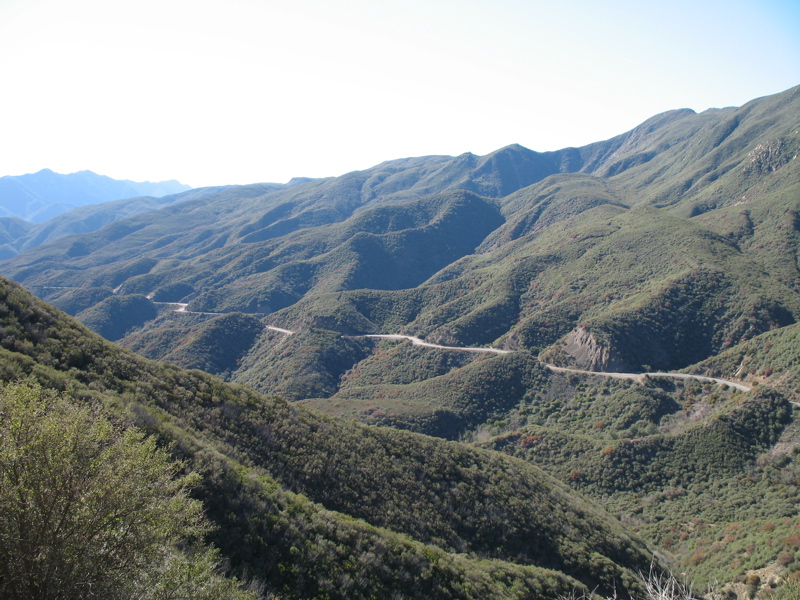 he Ojai Freeway follows the lower reaches of the Ventura River (when you get off the 101, at seaside, you’re actually above the river’s estuary). To the east you’ll see the hills and downtown streets of Ventura, followed by the neighborhood along Ventura Avenue where some fantastic Mexican food can be found. Off to the west, an old river terrace stands out between the flood plain and the coastal hills. Some of the hillsides show cultivation. Others, a little farther on, will be scattered with active oil and gas wells that stretch for miles.

After about 6 miles, the freeway ends, narrowing down to two lanes as the 33 enters the eucalyptus-lined community of Casitas Springs. Next comes the Lake Casitas reservoir, where swimming is prohibited – but there’s great bass fishing, bald eagle viewing, a disc golf course, and camping. For the next 12 miles, the road follows the steeper gorge of the Ventura River as it cuts through the coastal hills, passing through the small communities of Oak View and Mira Monte, and arriving at the western end of the Ojai Valley after an elevation gain of about 450 feet. 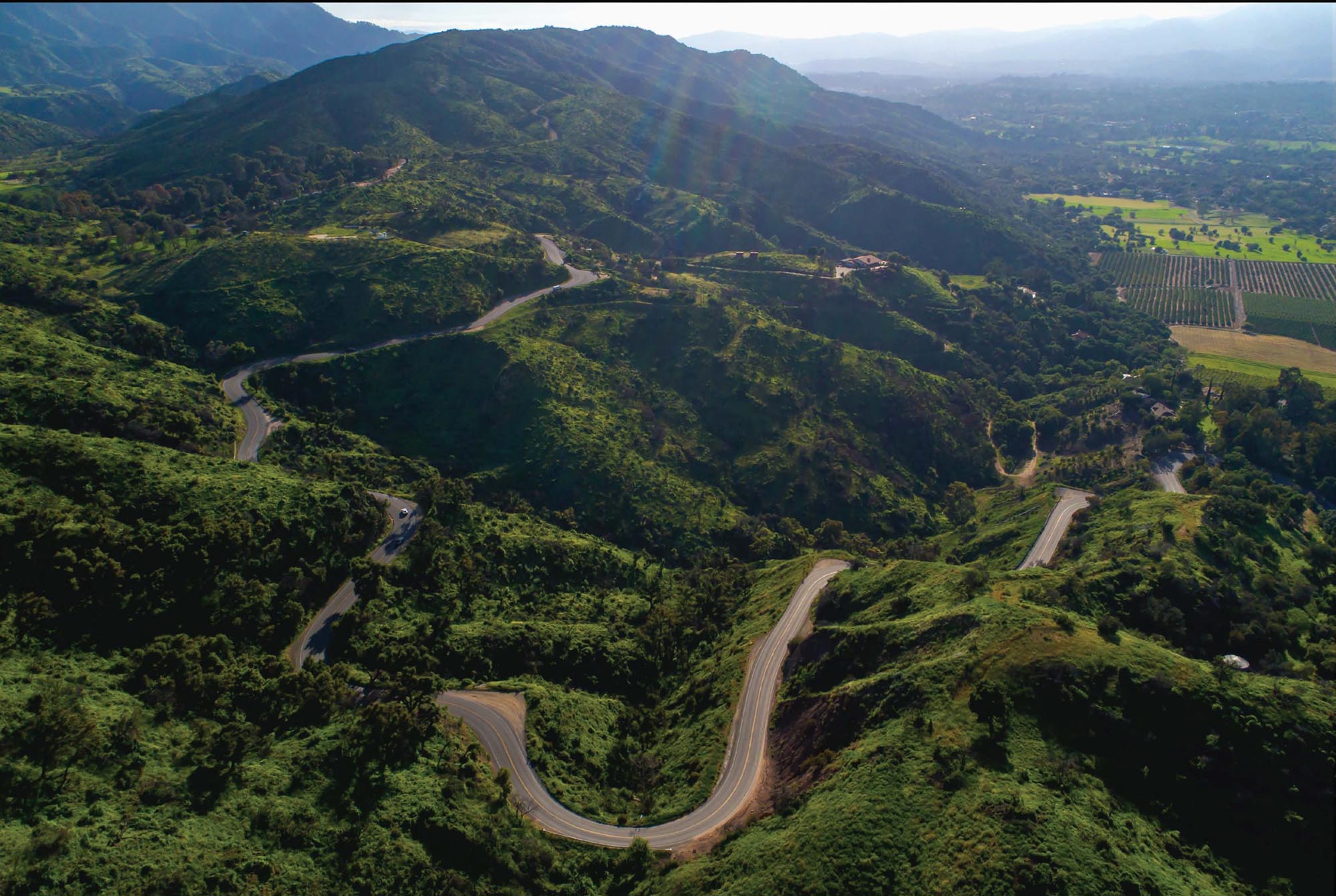 If you’ve got time, take the SR-150 turn and head into downtown Ojai, or take a left a mile further up the road and check out the fun and funky Meiners Oaks community. The Ojai Valley as a whole is a good base for exploring the lower 60 miles of SR-33. Long renowned as a center for the arts, culture, and spiritual studies, the town is the setting for the annual Ojai Music Festival as well as the Ojai Valley Tennis Tournament, known  as “The Ojai.”

Motels, spas, and B&Bs provide lodging throughout the valley, and restaurants offer a wide range of cuisine. In recent years, wineries and craft breweries have entered the local economy. It’s a great walking town, too, for anyone inclined to stroll. And for travelers simply in need of a break, the trees and walkways of downtown Libbey Park always hold tranquility in store.

At Ojai, follow the road signs north toward Maricopa – or the Maricopa Highway as SR-33 is known from here to Kern County. This will take you farther up the Ventura River Valley, through cultivated spreads of citrus and avocado, the terrain all the while growing steeper and craggier on every side.

As you leave the Ojai Valley, shortly after entering the Los Padres National Forest, the road becomes a designated National Forest Scenic Byway until it reaches the Lockwood Valley Road, about 30 miles ahead. And it’s an official California State Scenic Byway from there to the Santa Barbara County line. That means it’s going to be stunningly beautiful, as you might expect, so bring along a good camera or two because you’ll to be tempted to pull off around just about every bend. It also means there are practically no services or amenities to speak of until you get into the next county, and  cell phone coverage back there is nil. It’s a good idea to bring along some extra water, some sandwiches, and maybe an apple or two. 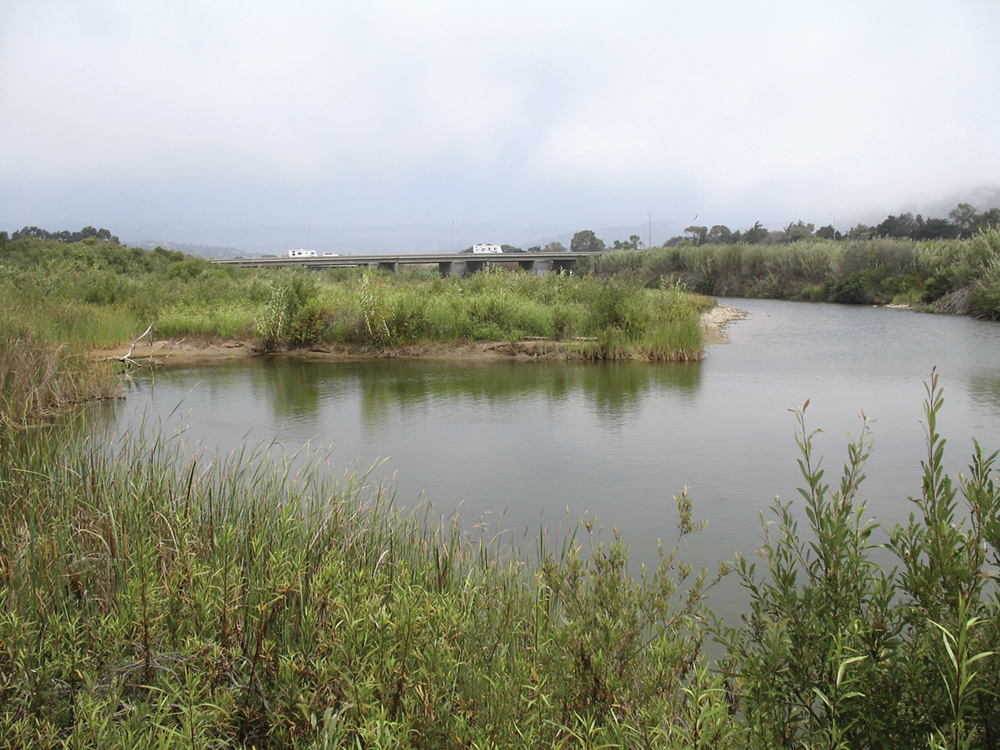 Ventura River, start to the 33 (Photo by Bill Warner)

From the upper edge of the Ojai Valley, SR-33 climbs along the gorge of the North Fork of Matilija Creek, one of the Ventura River’s two main tributaries. This part of the journey includes three impressive tunnels cut through hard bedrock. After about 4 miles and an elevation gain of 1,000 feet, you’ll pass through the Wheeler Gorge Campground. There is also a visitors center, including a ranger station and a wildlife museum, but these may be closed due to the pandemic. If you’d like to visit, check first with the Forest Service before you head out. 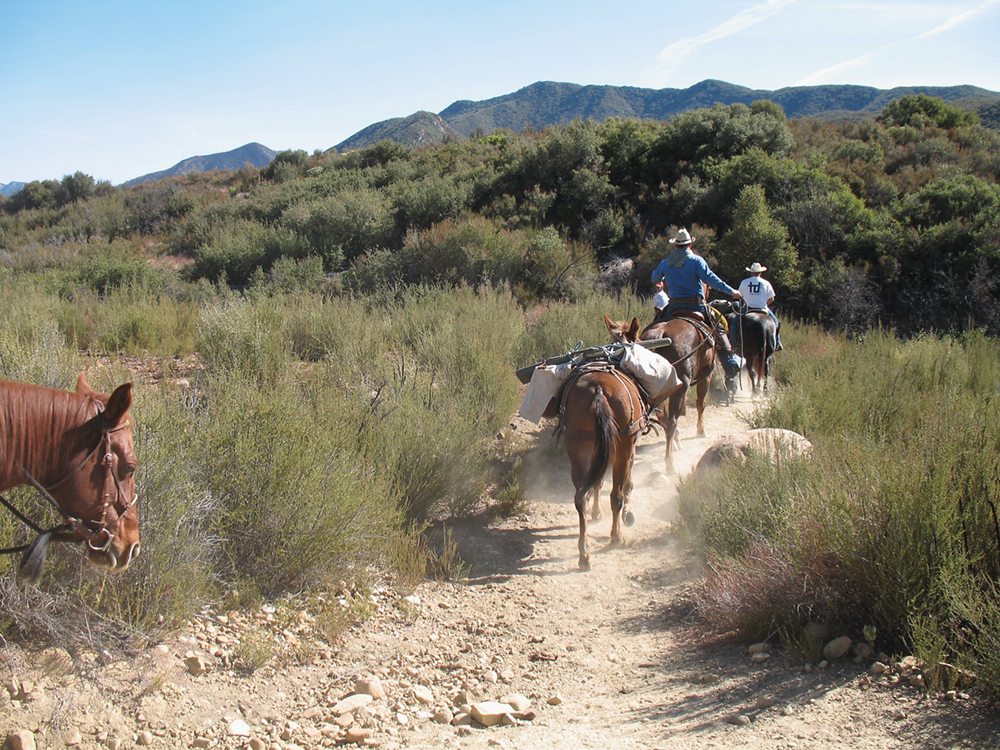 Wheeler Gorge Campground itself sits on the North Fork of Matilija Creek, 8 miles north of Ojai. This campground has sites containing fire rings, barbecue grills and picnic tables, and is shaded by oaks and other trees. The grounds have public toilets but no potable water. A creek curves through the campground and typically runs from winter to early summer.

The next 6 or 7 miles take you up another 1,000 feet along the flanks of Wheeler Gorge proper, and you’ll know it when you see it: it’s awesome in the truest sense of the word. The grade up the gorge is wide and smoothly paved, and there are plenty of places to pull over and enjoy the view. It is steep and full of curves, though – and it is a favored climb for cyclists – so be sure to slow down and drive defensively. 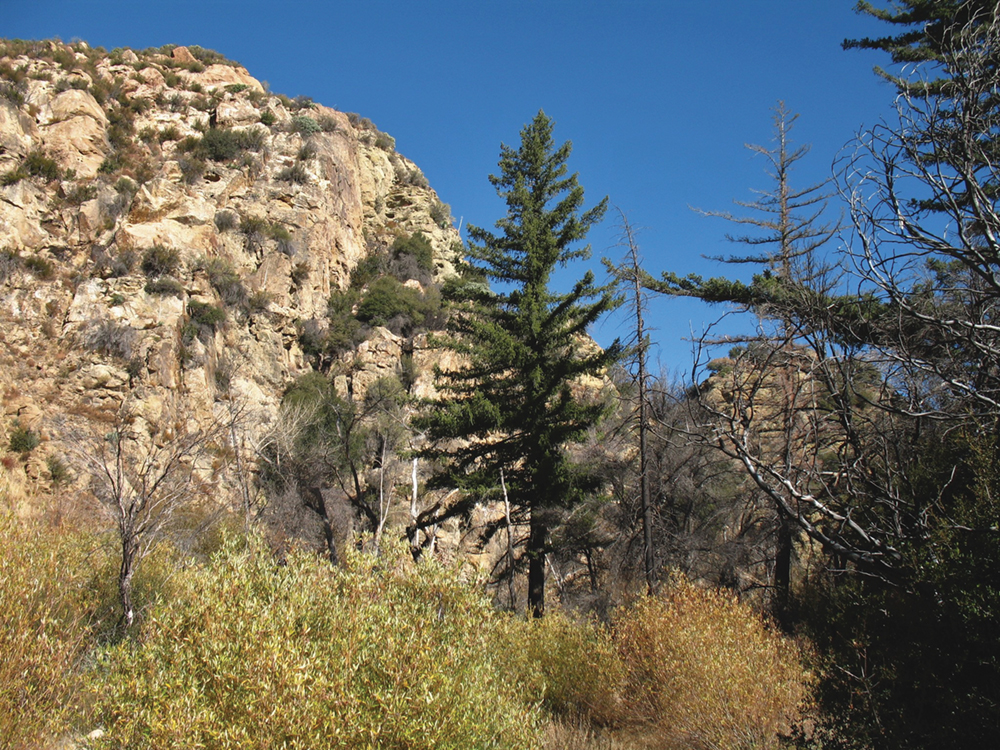 Wheeler Gorge roughly divides the Santa Ynez from the Topa Topa Mountains, with the highway taking you mainly up along the Santa Ynez side. At the top of the gorge, maybe a quarter mile before the intersection of SR-33 and Rose Valley Road, three turnouts offer striking views of the landscape below – including the Pacific Ocean and Channel Islands if the  weather agrees.

Rose Valley is yet another great side trip from SR-33. Rose Valley Road runs east off SR-33, the intersection being about 14 miles north of Ojai, or just past the top of Wheeler Gorge. Scenic in its own right, the drive down this valley includes access to two notable destinations: Rose Valley Falls and the Piedra Blanca Rocks. 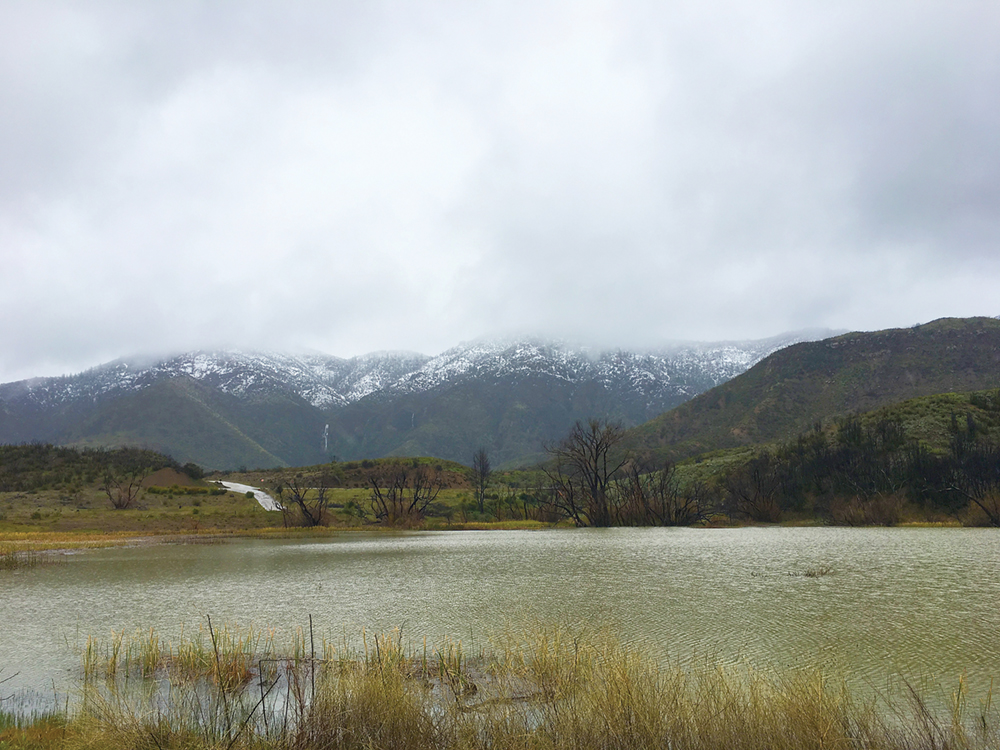 About 3 miles down Rose Valley Road, you’ll turn right to the nine-site public campground in which the Rose Valley Falls trailhead is located. The trail itself is only about a quarter mile long and an easy hike. The falls descend over two tiers comprising about 300 feet. You don’t see the upper tier if  you’re standing at the bottom; however, it would be best to resist any temptation to climb – the slopes alongside the falls can be dangerous. 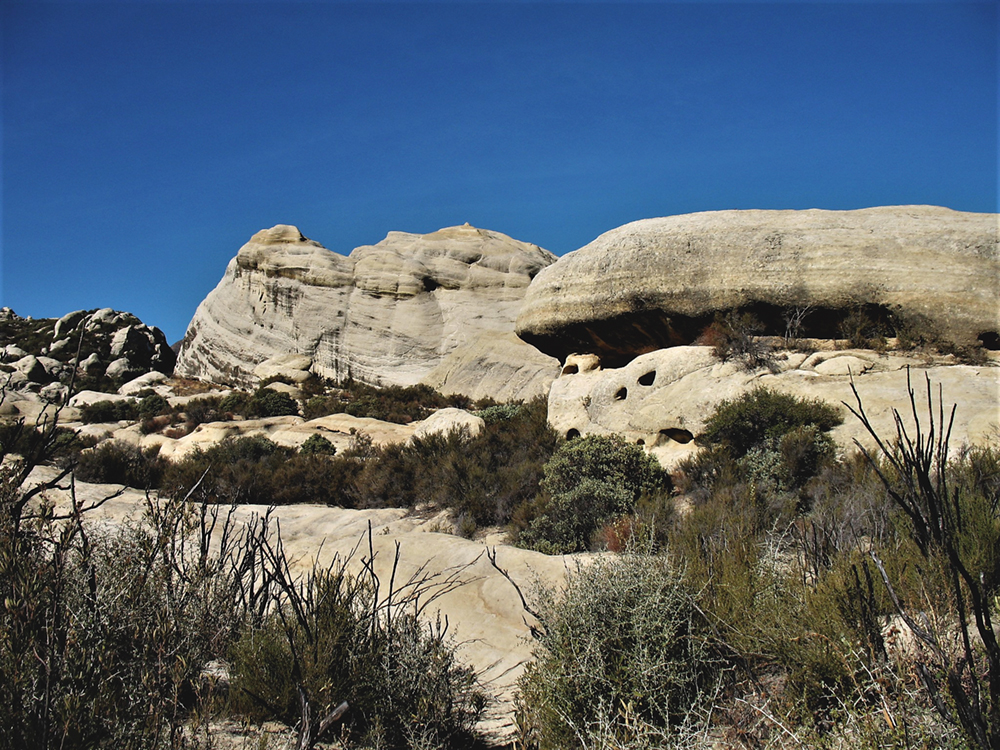 The Piedra Blanca trailhead is at the end of Rose Valley Road, about 5 miles from the intersection with SR-33. The trail to the rocks is a little over a mile and a moderate hike. The destination is a remarkable formation of massive white sandstone, smoothed and shaped by the elements. Hours can be spent clambering around on this feature. Or you can sit and enjoy the pervasive qualities of stillness and peace. This is a semi-arid environment, so be sure to bring along plenty of water if you opt for this outing.

For the next 17 miles, SR-33 crosses a rugged massif formed by the range of the Santa Ynez Mountains. The Santa Ynez, in turn, are one in a larger series of fault-block uplands known collectively as the Transverse Ranges. These ranges are distinctive, in part, because they tend to run east-west, as does most of the coastline they face. That orientation, in turn, is attributable to the evident fact of the ranges all being situated on a sort of tectonic mini-plate, a chunk of the earth’s crust that broke off from the North American plate some 20 million years ago – since which time it’s managed to rotate about 90 degrees. (Hence, if you drive from Malibu to Point Conception, you’re mainly traveling from east to west.)

And not only are the Transverse Ranges being ground and rotated between the tectonic plates of the continent and Pacific Ocean, but they’re also being squeezed gradually upward: the whole region is rising.

Much of the route across the Santa Ynez follows the course of Sespe Creek, a designated National Wild and Scenic River, which means it is free of any dams or channelization. Trailheads for hiking and mountain biking can be found along the way, and opportunities for rock-climbing and bouldering abound. The road continues to ascend along this stretch, reaching an elevation of 5,160 feet at Pine Mountain Crest (near the intersection with Pine Mountain Ridge Road), the highest elevation found anywhere on SR-33.

From there the road descends to the Lockwood Valley, about 4 miles driving distance and an elevation loss of around 1,700 feet. Take a right onto Lockwood Valley Road, then a right onto Camp Scheideck Road; like the drive up Wheeler Gorge, this grade is curvy and steep, so check your speed. But at the end, you’ll find a hidden little community, the Camp Scheideck Bar & Grill, and the Reyes Creek Campground.

At the bottom of the grade below Pine Mountain Crest, SR-33 picks up the westward-trending course of the Cuyama River, the mountain curves giving over to broader straightaways as it goes. The overall landscape is largely arid and desolate, although cultivated acreage begins soon to appear near the highway, notably livestock, vineyards, and pistachios. In this stretch, you’ll find yourself crossing into a corner of Santa Barbara County, and then into San Luis Obispo County shortly after that. 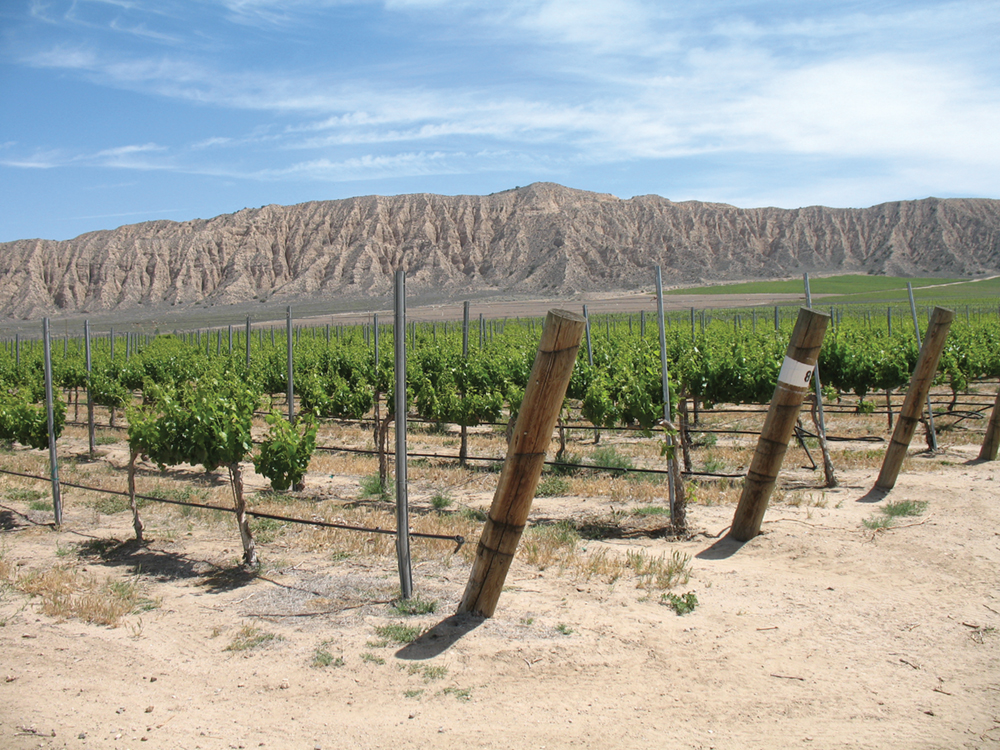 In the blink-and-you’ll-miss-it community of Ventucopa, you can find The Place (have a slice of pie!) and the Santa Barbara Pistachio Company (whose tasty wares are grown in the surrounding valley). You’ll find the dirtbikers’ haven of Ballinger 4 miles past Ventucopa.

Past Ballinger, 3 miles farther brings you to a T-intersection with California State Route 166, which is effectively the end of this outing on SR-33.

By turning left on SR-166, however, you’ll have a little under 10 miles of good, straight highway to the community of New Cuyama, where you can find food, lodging, groceries, and gasoline – still far from the madding crowd, for sure, but with just enough creature comforts for taking a break and kicking back. 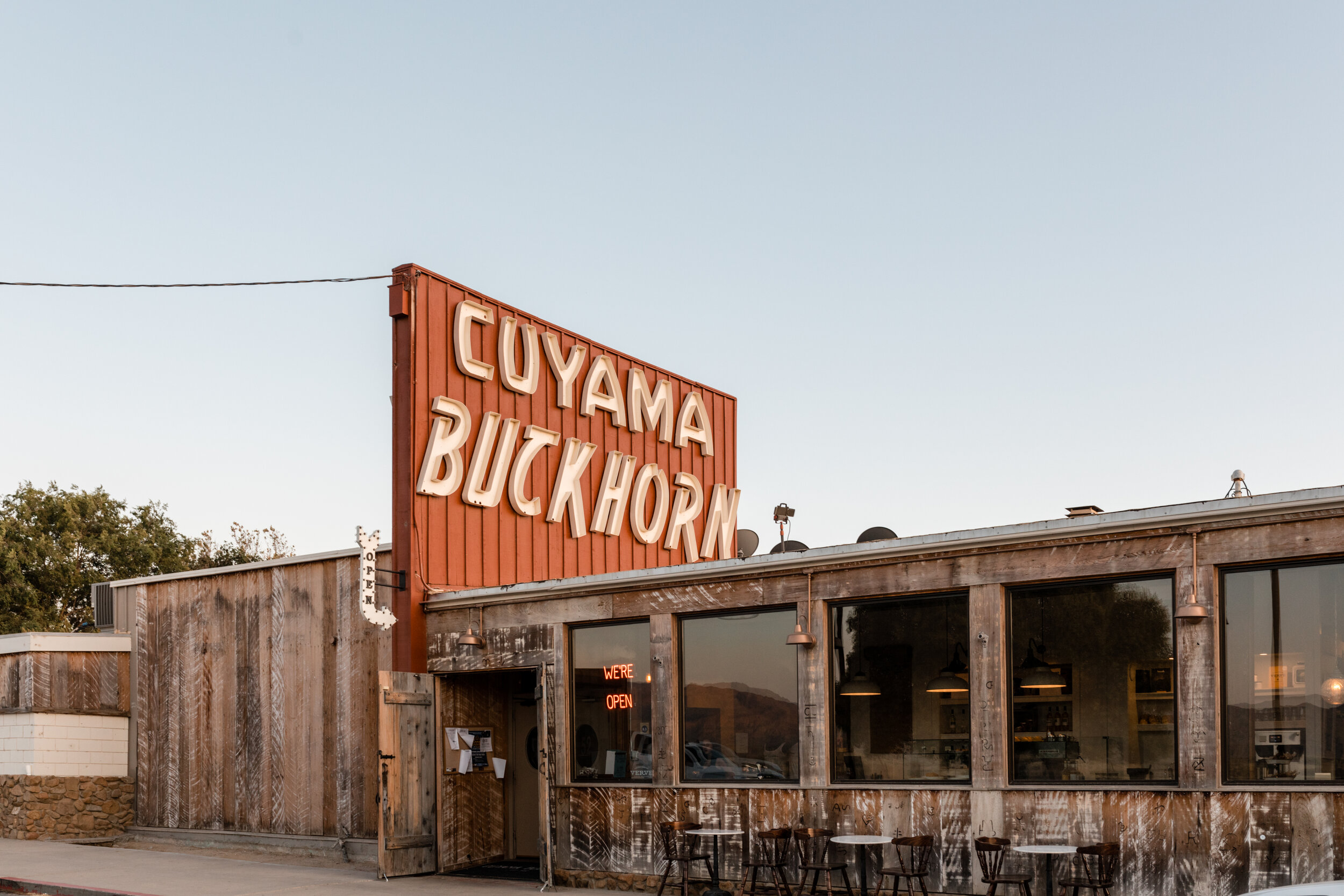 Among the favorites in the Cuyama Valley is the Buckhorn Restaurant. Part of the newly refurbished Cuyama Buckhorn Inn, the restaurant and bar are open 11 am to 3 pm daily, with patio dining only at present. The menu includes salads, nachos, and house chili, as well as a variety of sandwiches, burgers, tacos, and tri-tip. The Cuyama Buckhorn Inn itself is a longtime fixture in New Cuyama. It got a complete makeover in 2019 and has reopened under new management. Its 21 rooms are outfitted with rustic décor, and a new swimming pool is in the works for 2021. The feel of rural seclusion goes along with lodging at the Buckhorn, but civilization is not far – it’s an easy 20-minute drive to San Luis Obispo on the SR-166.

Whatever your heart’s desire, from bouldering to camping, dining to shopping, or just taking in the breathtaking views, you’ll find it somewhere along SR-33. Come on out and enjoy the ride!