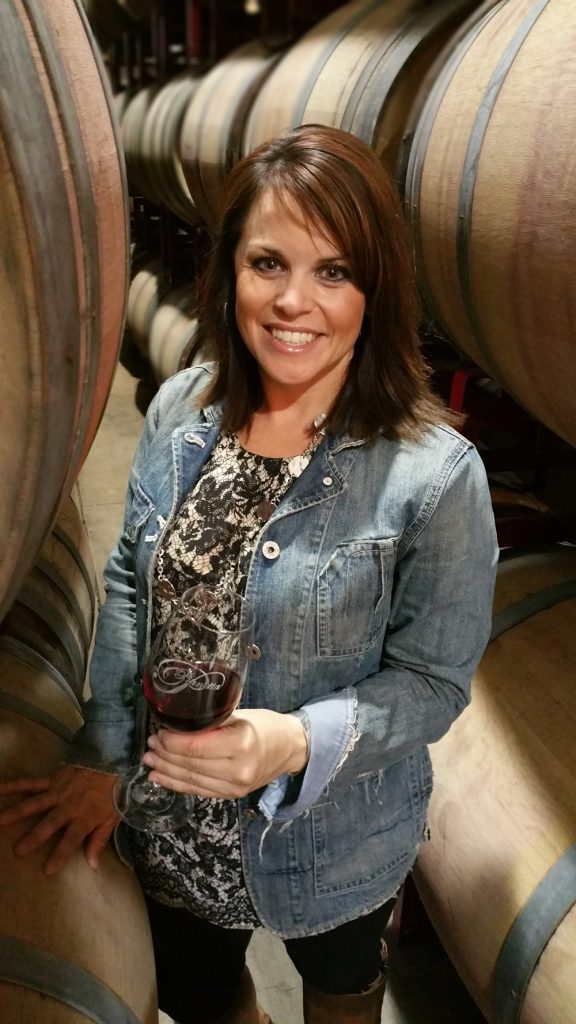 Winemaking is where art and science meet patience and muscle. I’m sure there’s a fancier way to say that, but Pliny the Elder never hung out in Paso Robles. So picture the shrugging girl emoji, and pour us another glass. While you’re at it, ponder the fact that according to trade association estimates, just 10 percent of winemakers in California are women. In such a progressive state, how is that number so low?
Interestingly, that’s not something winemaker Caitlin Pianetta spends much time thinking about. She mostly fills her days working in the vineyards, driving forklifts, and crafting luscious red wines for Pianetta Winery — and pouring at their downtown Paso tasting room in between.

But yeah, the “woman winemaker” thing comes up sometimes, she admits. “My dad’s friend was on the crush-pad, I’m on the forklift, and this guy walks right past me to talk to my dad’s friend. He pointed at me and was like, ‘I’m just standing here, she’s the one you have to talk to!’” Caitlin laughed.

Growing up with two brothers and veteran father, Caitlin was a self-professed tomboy for whom doing “guy stuff” never held a stigma. Some of her happiest memories as a kid were when her uncle would let her drive around on the tractor with him at their Bay Area family farm.
Her father, John, had similar happy memories of farm life. While in college, he was drafted into the military as a Navy pilot in Vietnam, then flew commercially for many years. “But he always wanted to farm again,” Caitlin said. The old family farm consisted of row crops, however, and the industry was changing, so John went in search of something else — a permanent crop. A vineyard seemed like a good match. An aunt in Lodi had had a small vineyard, and John had once helped Caitlin’s uncle make some basic wines. The roots were there.

So off to the Central Coast John went, eventually settling on a 95-acre plot of land in the Indian Valley north of Paso Robles. Originally, the plan was to grow 65 acres of Cabernet Sauvignon and Syrah grapes to sell to others, not to make his own wines. “It was always about quality, not quantity. It was all about flavor,” Caitlin said.

But as the wine industry changed, some wineries, she said, were losing that vision in favor of feeding the big corporate monsters. However, the Pianettas weren’t about to sacrifice their quality. “We had a great relationship with some of the winemakers we worked with, and they encouraged us to start our own winery,” Caitlin remembered. “So we did that, and 2002 was our first harvest.” 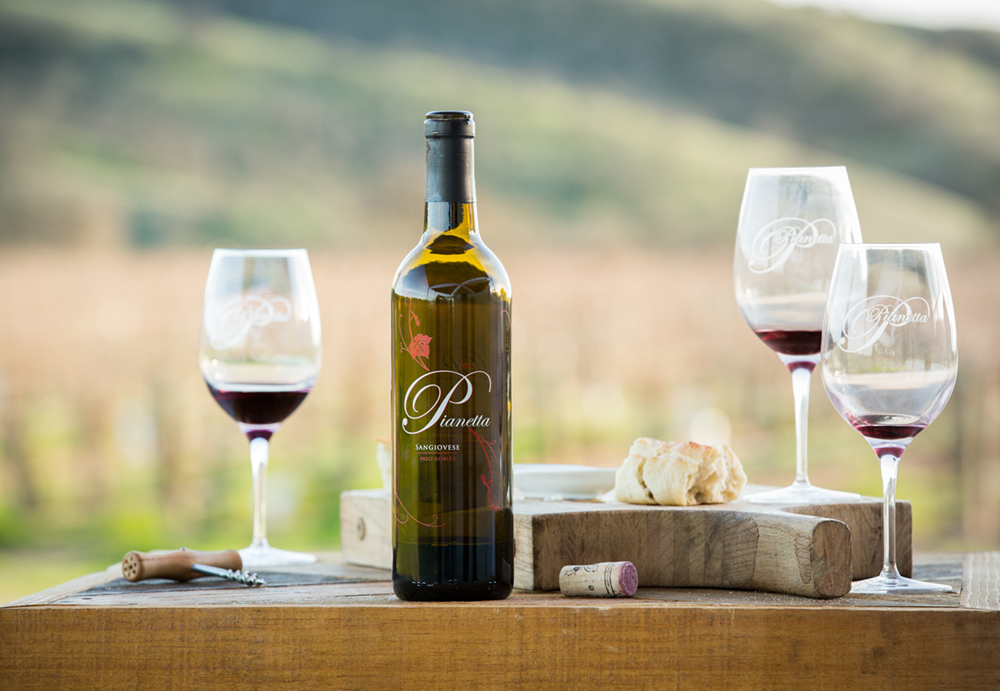 By this time, Caitlin — who spent the majority of her time growing up in Fresno with her mom — had already spent weekends and summers working at the vineyard. And when her graduation from Cal Poly, San Luis Obispo, coincided with Pianetta’s first official release of Cabernet Sauvignon and Syrah estate wines, “It was like, ‘Hey we made all this wine, now you can sell it!’”

Marketing, then, would be her first foray into the wine world — outside of working the vineyards, that is. She found she had a knack for it; she was the mind behind the opening of their Downtown Paso tasting room in 2006. But Caitlin didn’t end up staying on the marketing side for too long. As Pianetta expanded and added other red varietals, she became more and more interested in the actual winemaking process itself. They expanded, sourcing grapes from other regional vineyards to expand their wine offerings.

“At first, I was just doing what my dad told me to do,” she recalled. “Then I started really paying attention to what was going on, and asking questions” — and doing more research, and reading books, and going to seminars, and making suggestions … and then, eventually, making the wines. “I got more and more involved, pushing to do more and more,” she said. “And when my dad got sick a couple of years ago … that was me taking over, whether I liked it or not!”

Luckily, she liked it, a lot. Winemaking offered an exciting outlet for Caitlin’s creativity, one that blended her love of working the land with crafting a distinctive product. But at just five feet tall, she’s had to get creative in other areas too. “It’s very physically demanding, moving barrels around, stuff like that,” she pointed out. “So I’ve found ways to adapt the winery, do it my way.”

Today, John’s healthy and back at the winery, putting his military background to good use. “He’s a scientific guy, very meticulous,” Caitlin said. “He’d do the same thing every time. He knows what he likes.” And increasingly, he likes what Caitlin’s worked on. Two years after raising an eyebrow at one of his daughter’s ideas, “he’ll taste it, and he’s like, ‘This is really good!’ It’s fun to see him appreciating what I’m doing.” 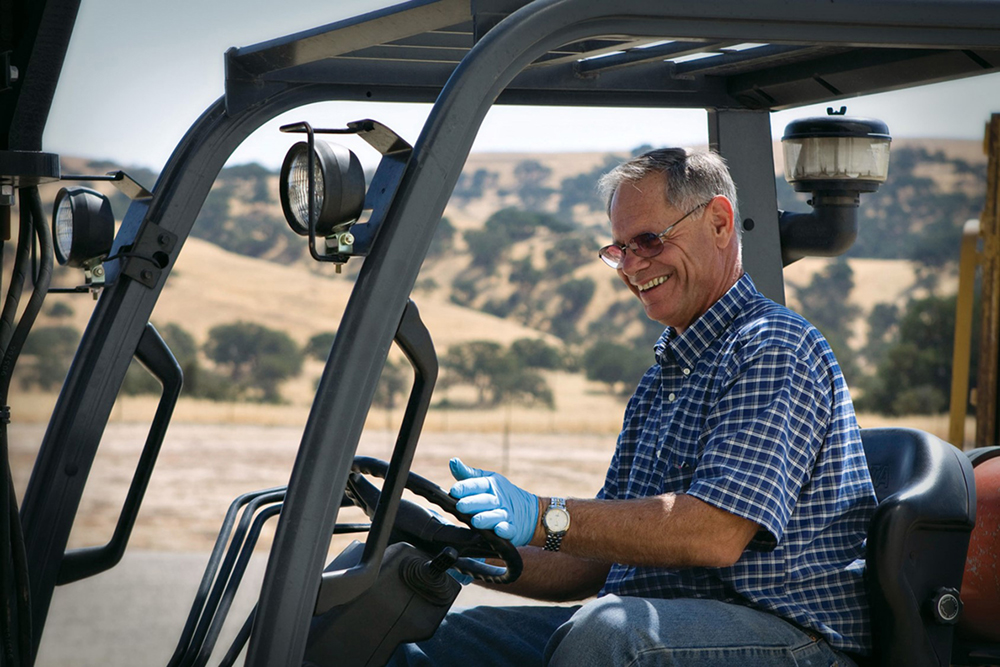 While John’s more “regimented,” Caitlin likes to shake things up a bit. “I do things a little outside of his comfort zone.” But, she emphasized, “You’ve got to have a good product, or you’re not going to make it. In this industry there are these flashes in the pan, and that’s not something we ever wanted to do … I do have some fun with things, but they’re not meant to be trendy. They’re just fun, an accompaniment.”
Not all those accompaniments were intentional, at least at first. But some, like the Pianetta Jug Wine, ended up giving Caitlin a platform to prove her mettle.

In 2007, Pianetta decided to change its label from paper to a screen print. When it came time to bottle, they made an awful discovery: they had been shorted bottles. “I was so upset, and my dad was irate,” Caitlin remembered. With John ready to toss out the extra wine, Caitlin thought back to a conversation she’d had with friends back in college. “We had joked that we needed to bring jug wine back. But GOOD jug wine.” Eventually, Caitlin convinced John they could have a little fun with this mishap, so she headed off to Napa where she found big jugs with screw caps — “A throwback to old Italian table wine.” 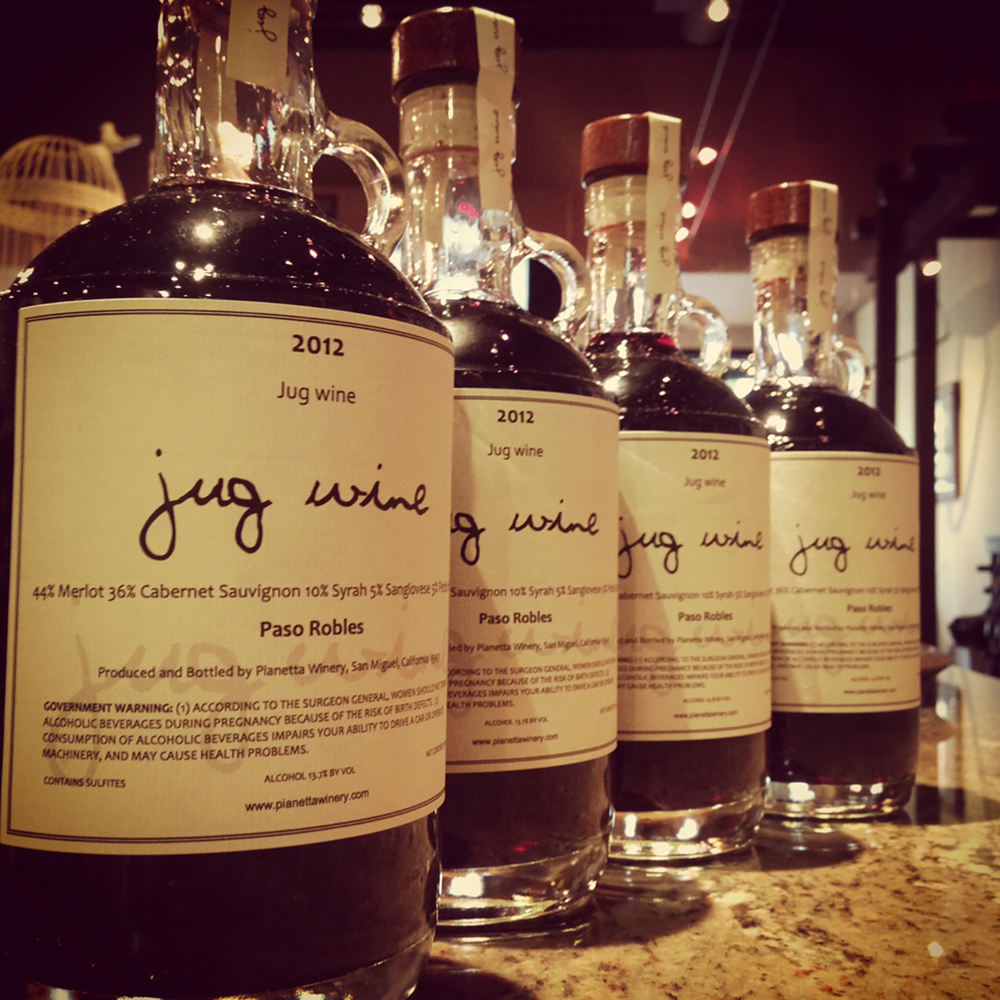 The zinfandel blend ended up being a huge hit. “We were just going to pour it at our barbecue during harvest,” Caitlin said. “But everyone wanted one! … We sold out in one day!”

Today, the Jug Wine has a slightly different look, but the whimsy and nostalgia — not to mention the quality — of that original mistake has made it a perennial favorite. “The Jug Wine is where we experiment with different blends,” Caitlin said. “It’s always changing. It’s just supposed to be a fun, everyday wine.”

But go to the tasting room, and you’ll find much more than Jug Wine. Current releases include an estate Cabernet Sauvignon, estate Syrah, Petite Sirah, Sangiovese, Barbera, Zinfandel, a Rosé called Low Maintenance, and blend, Tuscan Nights, which is a nod to the Pianettas’ Northern Italian heritage. The rotation may change — Caitlin is excited about a Zin coming soon, and has been experimenting with some Malbec, too. 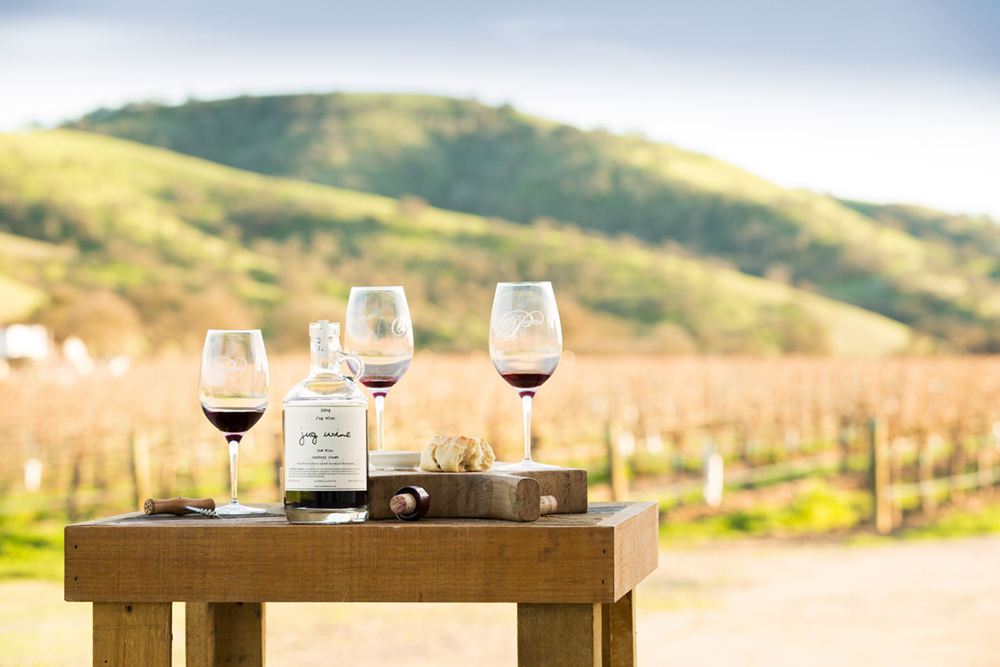 So it’s best to just head out to the Downtown Paso tasting room and check it out yourself. Inside the historic building constructed in 1888, you’ll find a blend of natural warmth and modern accents. “We’re a small ranch. We’re basically farmers making wine. So we wanted that to be reflected in the tasting room,” Caitlin said. The cozy yet sophisticated space nods to the building’s past with photos of its early days, as well as plenty of present day shots of the vineyards. Pianetta also just added a new VIP private tasting space to accommodate larger parties, or smaller groups looking for a more intimate experience.

Want more? Pianetta also offers tours at the Indian Valley winery itself. Tour the estate, taste from the barrel, and enjoy gourmet cheese pairings in the vineyards. Or, go even more in-depth, and camp amongst the vines (bring your own tent or choose their hill-top Airstream). Visitors can customize the experience with a winemaker dinner, champagne brunch, and more. 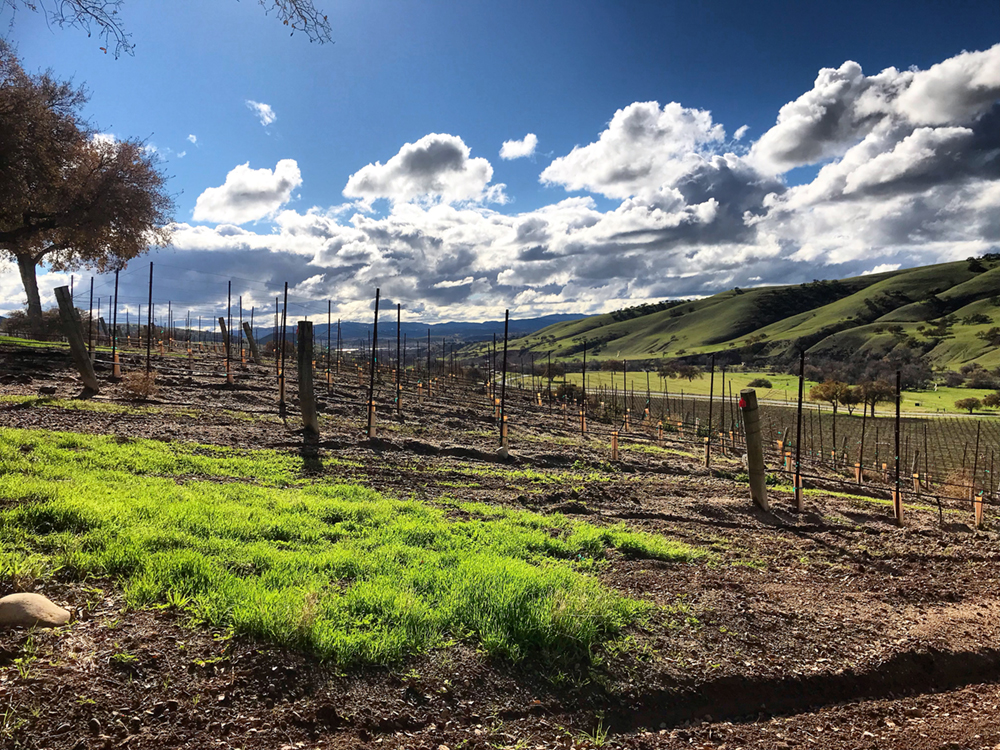 With this father-daughter pair, you’ll find an adventurous spirit firmly rooted on solid ground. Caitlin may be blazing a trail as one of the region’s few woman winemakers, but she has her dad’s grit and no-nonsense sentimentality — and that keeps her eyes on the process as much as on the prize.

Being a woman in a male-dominated industry may be something some people admire, but, “It just sort of happened this way. It’s not like I’m trying to make a statement,” she said. It has its perks at times, though. In the tasting room, “When people try something I made and they resonate with it, and (a host) says, ‘Oh yeah, that was all Caitlin’s idea’ and their eyes open up like, ‘oh wow,’ they know it’s not just a novelty thing. No, she can do this.”